A woman decided to keep her late husband’s bowel in a jar of formaldehyde preservative in their home as an ode to his sense of humor.

Tina Loudfoot, says the unusual keepsake of Derek Loudfoot – who passed away last year aged 48 –  may be a bit weird for some people to digest but it is a memory of their time together.

Mr Loudfoot had to have his colon removed five years ago after an infection in his bowel. But instead of having it disposed of, the ‘joker’ decided to keep it and have it preserved – even once bringing it to the pub before the landlady told him to put it away.

Mrs Loudfoot, now 48, said: ‘Del was a huge joker, he was always making people laugh and would make jokes out of bad situations to try make people feel better. ‘

‘When we first met when I was working, he was quite unwell.

‘He had a major operation to have his colon removed after an infection in his bowel.

‘He said he didn’t want it to be disposed of, so he arranged for it to be put in a jar. He kept it on a shelf in the living room almost like a centrepiece.

‘He was very proud of it. He even took it to the pub once.’

Mrs Loudfoot recalled the time when Mr Loudfoot brought the pickled gut into the pub they had met in.

‘Eventually the land lady said he was scaring off customers and asked him to take it away.’

Mrs Loudfoot and Derek Loudfoot, also known as Del, have a daughter, 12 and a son, 15.

‘When Derek started to become very unwell we decided to sit the children down and explain to them why he was in hospital so much,’ Mrs Loudfoot said. 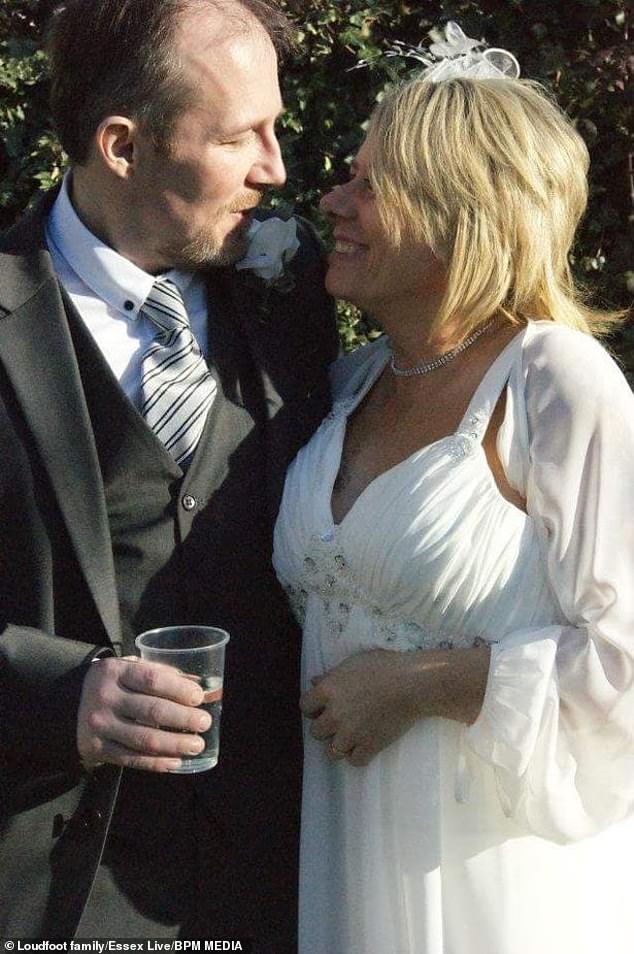 The pair married on February 25, 2012. From October 2017, Mr Loudfoot was in and out of hospital until died

‘They were about 8 and 10-years-old at the time. They understood that he had to have his colon removed but didn’t understand why he had it in a jar.’

When the pair moved in together they kept the jar behind their bedroom door until their children were old enough to understand.

Mrs Loudfoot said: ‘I insisted it was put away because I thought the children were too little our son was only a year old at the time.

Now, she says they love telling their friends about it.

‘A lot of people would say he had a warped sense of humour.

‘Everyone knows about it, I tell my friends and he told his, those that knew him found it funny but if I tell people now that don’t know him they might say it’s a bit weird.’

Mrs Loudfoot said: ‘They were looking for people who own really weird possessions. I rang them about the bowel. They were really interested at first.

‘The show producer asked if we could send pics. Then they decided it was just too graphic for prime time TV.’ 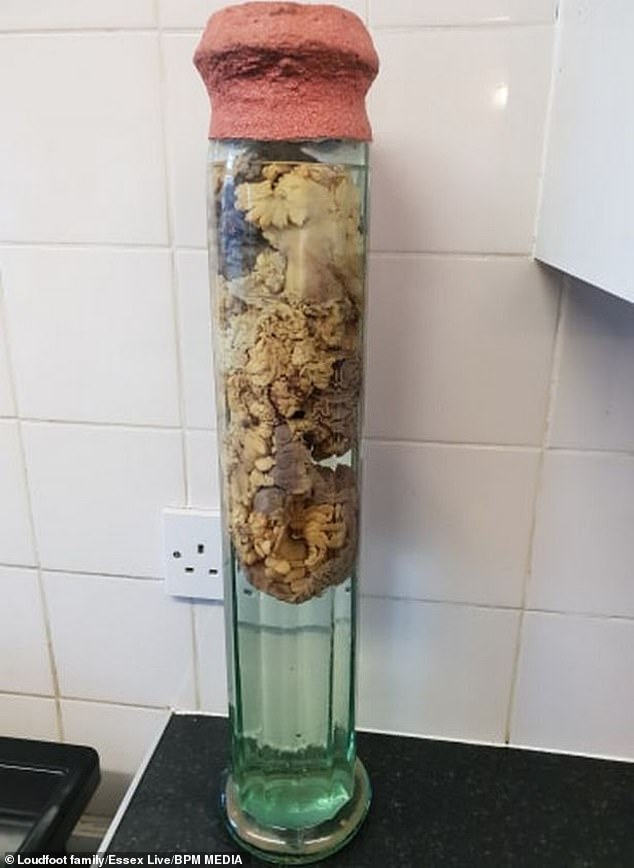 For the last ten years of their relationship, Mr Loudfoot became so unwell that both he and Mrs Loudfoot had to give up their jobs.

She said: ‘Derek was an operations controller at Stansted Airport, he absolutely loved it, he was gutted.

‘They let him have two years off sick, but he cried like a baby when they had to let him go.’

Mrs Loudfoot also gave up her job as a midday assistant at Moulsham infants school to be her husband’s full time carer.

She said: ‘His condition got worse, he spent more time in hospital than at home.

‘He had sepsis eight times and kept getting infections because his immune system was so low.’

From October 2017, Mr Loudfoot was in and out of hospital until died. 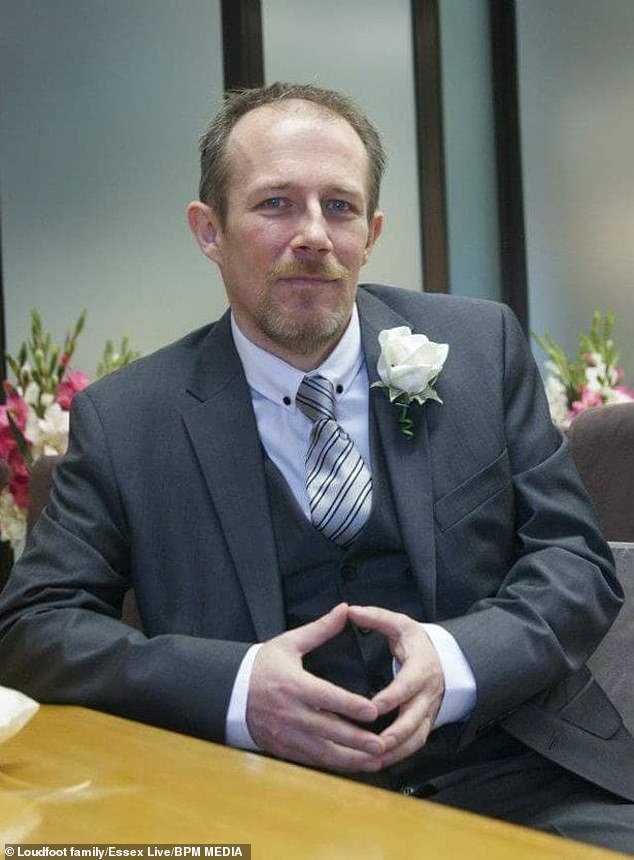 Derek Loudfoot on his wedding day, Mrs Loudfoot said he didn’t want the bowel to be disposed of

He was well enough to spend three days over Christmas at home with his family, but sadly passed away on January 28 last year.

Mrs Loudfoot said: ‘He was due to have an operation on his hip the day before. The hospital phoned me that afternoon and told me it had gone well and in two weeks he should be recovered.

‘The day after the operation I was trying to get hold of him but he wasn’t answering. Then I had a call from the hospital saying he had been been put in a coma and was in the Intensive Care Unit.

‘At 7pm that night they rang and said he had taken a turn for the worse. He was in a London Hospital so I rang round a few friends and found one who could take me there.

‘At about midnight they asked if there was anyone else I would like to call, at which point alarm bells started ringing.

‘I rang his brother David and said I didn’t think he was going to make it through the night. 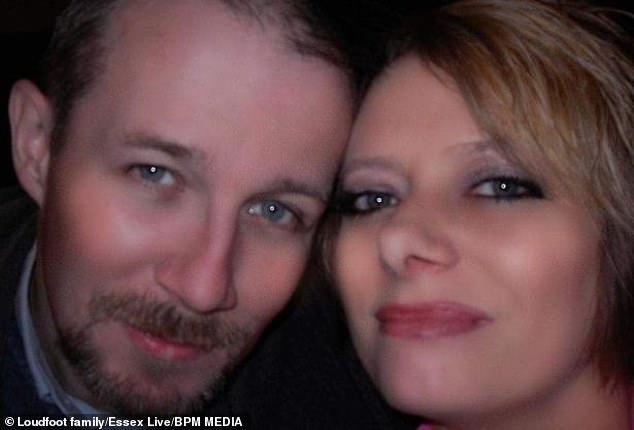 Mrs Loudfoot and her husband Derek, also known as Del, have a daughter, 12 and a son, 15

‘There were medics all around him, one of them said to me if he survived his brain would be starved of oxygen.

‘I knew there was no way he would want to live in that state, so we agreed to let him go. I sat by his side until he passed away.’

Mrs Loudfoot said the hardest part was telling her children the sad news.

She said: ‘My daughter wanted to go to school the next day, I thought it was a bit soon but I let her go. She lasted the day ended up having a couple of days off after that.’

Mr Loudfoot was just 48-years-old when he died of sepsis which caused multi-organ failure.

Mrs Loudfoot said: ‘Even in hospital, no matter how bad he felt, he was always making the staff laugh, mainly cracking jokes about himself and his illness.

‘He had that very warped but totally harmless sense of humour. Always putting other people before himself.

‘He was the love of my life and everyone who knew him, loved him. The world lost a legend when we lost him.’

Mr Loudfoot was buried at a plot in Chelmsford Cemetery & Crematorium.

Mrs Loudfoot said: ‘He always said to me he wanted the jar to be buried with him, but then I had a long think about it and thought if he knew I really wanted to keep it, he wouldn’t mind.

‘When my day does come, I’ll go in the ground in the same plot as him, and I want his bowel buried with me so I feel like he will be complete again.’