Country singer-songwriter Jake Flint’s wife posted a second heartbreaking tribute to her husband after he died in his sleep hours after their wedding.

Jake, 37, died on Saturday night hours after he said ‘I do’ to his bride Brenda near Owasso, Oklahoma – about 15 miles outside of Tusla. His cause of death hasn’t been revealed.

Brenda announced the death of the ‘I’m Not OK’ album singer on social media as she now prepares for his funeral.

On Tuesday, his heartsick bride wrote: ‘We should be going through wedding photos but instead I have to pick out clothes to bury my husband in. People aren’t meant to feel this much pain. I can’t take it much more. I need him here.’

Oklahoma singer-songwriter Jake Flint, 37, died in his sleep hours after exchanging his wedding vows on Saturday night. Pictured: with his wife Brenda

On Tuesday she wrote: ‘We should be going through wedding photos but instead I have to pick out clothes to bury my husband in’

She also posted a video dancing and kissing Jake on their wedding day with the caption, ‘I don’t understand.’

Jake was a Holdenville, Oklahoma native with two albums released in 2016 and 2020.

The shock and grief were apparent in the Oklahoma music community as word spread of his sudden and untimely death.

‘He was not only a client, he was a dear friend and just a super nice guy. As you can see from the outpouring on social media, he was loved by everybody. I think a lot of it was just that he was a people person, and he had an amazing sense of humor. He made everybody laugh, and he made everybody feel welcome,’ Doyal said.

‘He was an ambassador for Oklahoma Red Dirt music.’ 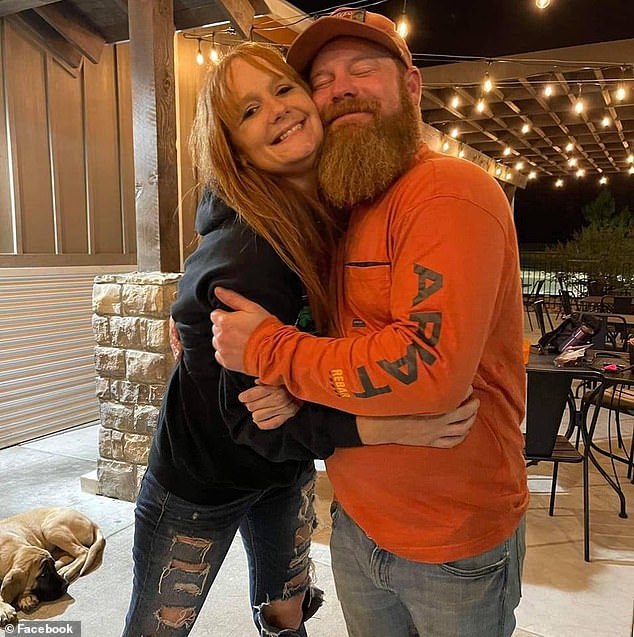 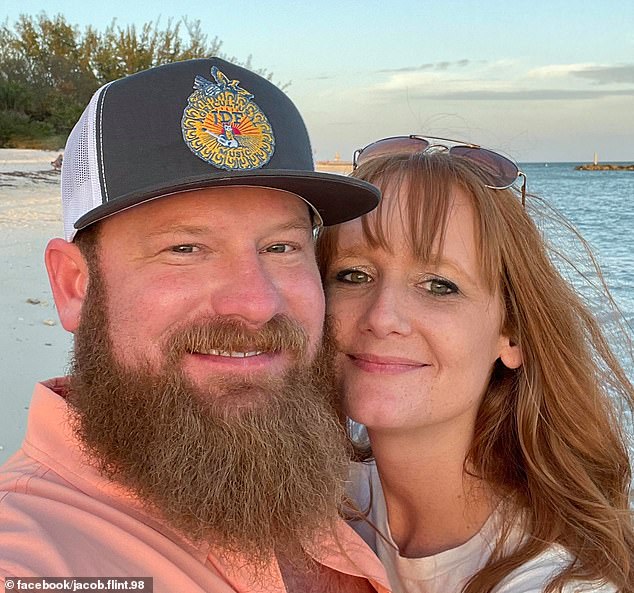 ‘With a broken heart and in deep grief I must announce that Jake Flint has tragically passed away,’ Cline wrote. ‘I’ve tried several times today to make a post, but you can’t comment on what you can’t process.’

Though it rained on their wedding day, the weather did not dampen the couple’s spirits who said their ‘I do’s’ in front of all their friends and family.

Mike Hosty, a one-man band from the Oklahoma city of Norman who played at the wedding, told local news. ”It was rainy, but he’d rented a 40-by-60 circus tent… They put up a bunch of carpets over the mud and then got two pieces of three-and-a-quarter-inch plywood and set it on the ground — and that was my stage. Jake goes, ‘Is that gonna be all right for you?’ And I go, ‘Jake, that’s perfect.’ A piece of plywood or a flatbed trailer is where I shine.’

He said: ‘I still have the mud in my old van… but it was just a fun wedding. And it’s just a tragedy what happened.’

Born in 1985, Jake was raised in the oilfield boom town of Holdenville in south eastern Oklahoma, the son of a wildcat oilman. He also grew up with his ‘hard-working mom’ according to his biography, and a single sibling. 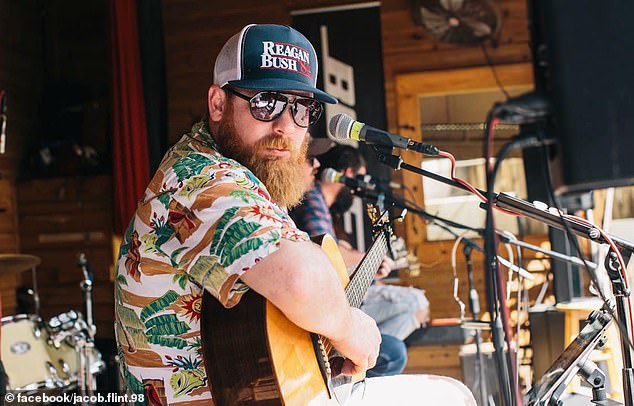 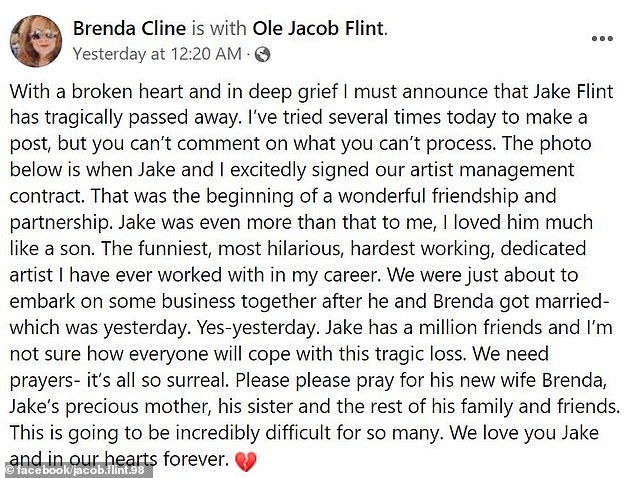 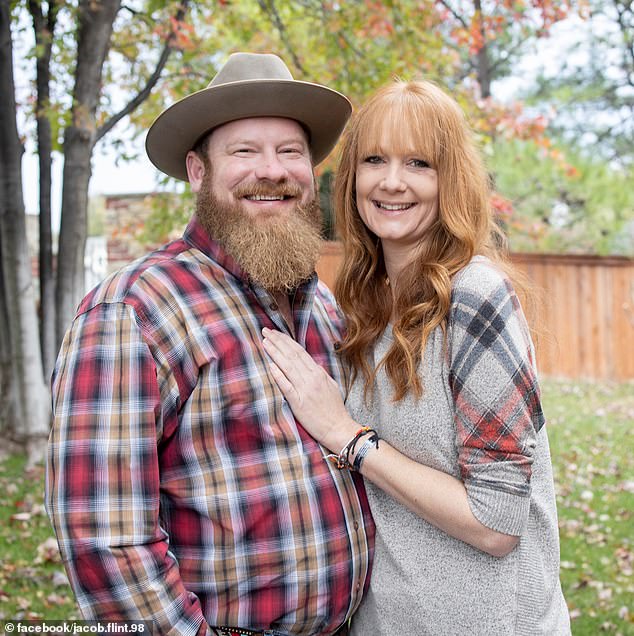 On Tuesday, the heartsick bride wrote: ‘We should be going through wedding photos but instead I have to pick out clothes to bury my husband in. People aren’t meant to feel this much pain,’ Brenda said. ‘My heart is gone and I just really need him to come back. I can’t take much more. I need him here’

According to his bio, he was transplanted to Tulsa, Oklahoma where Jake says he was always the ‘outcast country kid in the city.’

Jake got his love of music from his father, who raised him on John Denver, James Taylor and Dire straits, as well as local singers, his website added.

The country singer also developed a love of grunge during the 1990s after becoming close to his sister’s rocker friends. 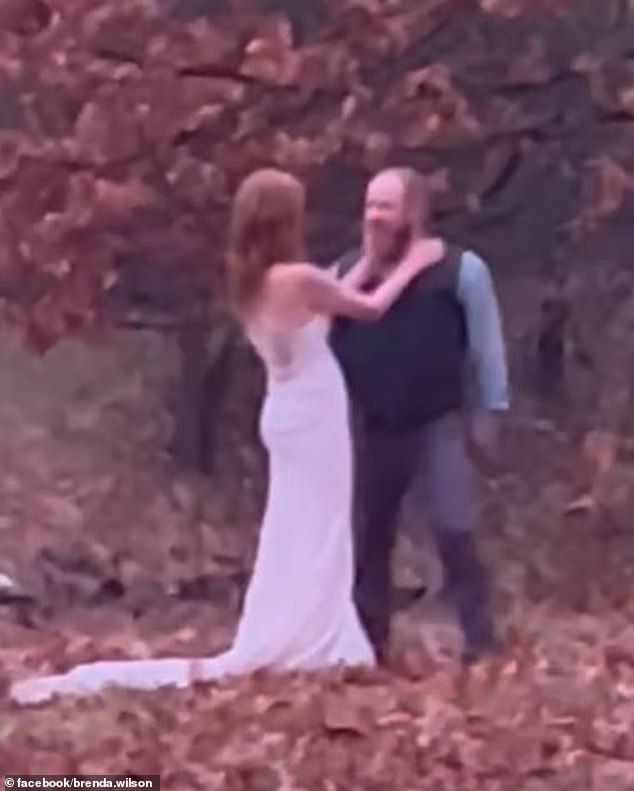 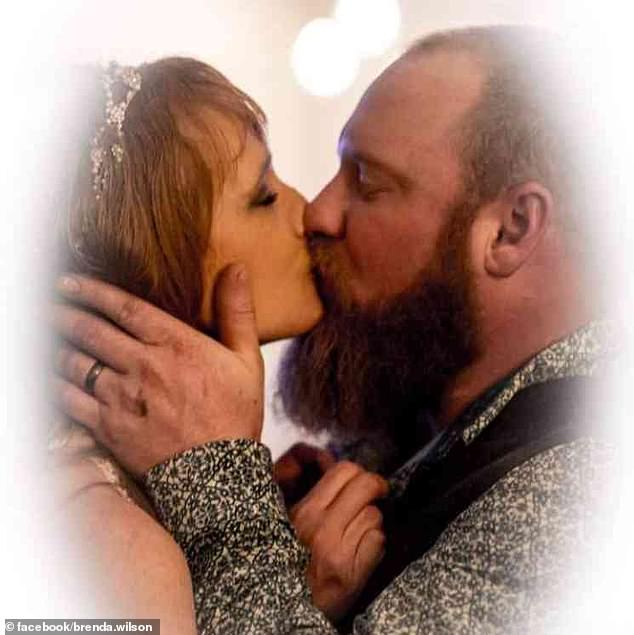 Jake’s first introduction to playing music was a result of his father having been diagnosed with amyotrophic lateral sclerosis (ALS) or Lou Gehrig’s Disease and was not able to physically provide interaction to his son.

Concerned about not being able to participate with Jake in sports, his father commissioned a couple of his lifelong best friends to teach Jake to play guitar and take him to regional bluegrass festivals.

Sadly, Jake’s dad later succumbed to his illness, with that tragedy inspiring the singer’s music.