The only wife of the four suspected penny loafer pervert brothers disappeared after just three months of marriage, DailyMail.com has learned exclusively.

Sandra Emery’s husband claimed in court papers that he could never find her and eventually divorced her 17 years later after court efforts to locate her failed as well.

Sandra was married to Donald Emery, who died last fall aged 85. Police with cadaver dogs have been combing through his 14-acre property outside Shelton, Washington, since the weekend.

They are looking to see if the brothers may be connected to the case of 10-year-old Lindsey Baum, who disappeared from her home, a half hour drive from the property, in 2009.

Police cadaver dogs began a grim search earlier this month of the secluded 14-acre waterfront property once owned by the the Emerys’ older brother, Donald, who died last year aged 85 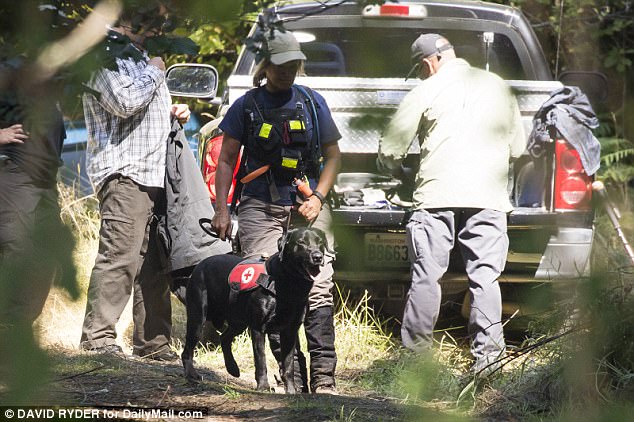 A cadaver search team is pictured on the property of the former home of Donald Emery in Shelton, Washington on August 26

Donald’s three surviving brothers, Charles, 82, Thomas, 80, and Edwin, 78, are due to make their first court appearance when they are arraigned in Seattle on Thursday. Charles, who suffers from dementia, lived part-time with Donald.

Each is charged with two counts of possessing child pornography. When cops raided their home in the Meridian district of Seattle they found a huge trove of material including pictures of child rape and murder and an extensive collection of children’s clothes including dozens of pairs of penny loafer shoes.

Similar material was found at Donald’s tiny ramshackle house that overlooks picturesque Oakland Bay, an arm of the Puget Sound.

Now the mystery of what happened to Sandra Emery, who would now be 77 if she is alive, is a new twist in the alarming case.

Court papers uncovered in Tacoma by DailyMail.com show that Donald filed for divorce from Sandra in May 1987. He said they married in Shelton in June 1970. According to a notice in the local paper Donald Emery, then 39, and Sandra Eddy, 30, took out a marriage license that month.

Throughout the divorce papers, Donald Emery even spells the name of his wife wrongly. He calls her ‘Samdra.’

He filed, saying his marriage had ‘irretrievably broken down,’ and said he did not know where his wife was living. He claimed they had separated in September, 1970. They had no children. 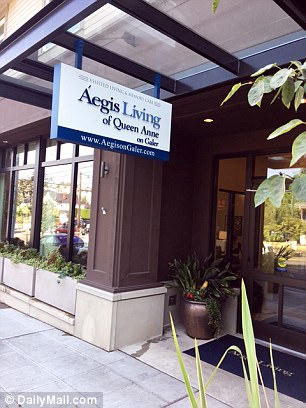 ‘I believe (Sandra) is not a resident of this state or if she is in the State of Washington she is concealing herself,’ he said in a sworn statement, explaining why he could not serve her with divorce papers.

‘I have made careful inquiry of relations, friends and business associates.’

Tacoma approved the divorce on September 8, 1987, four months after Emery had first filed.

Calls to Seattle police about whether they are also looking for Sandra’s body were not immediately returned.

The three surviving Emery brothers were turned in by a 49-year-old niece who had been appointed guardian of Charles in July. When she started rummaging through his property she found mountains of disturbing photographs and children’s clothes and reported it to police. 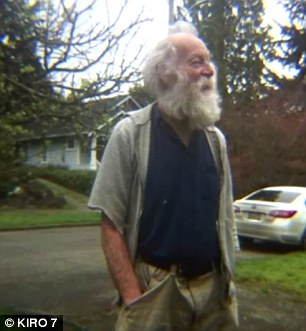 Charles Emery 82 (above) along with brothers Thomas Emery, 80, and 78-year-old Edwin Emery were charged with two counts of possession of depictions of minors engaged in sexual conduct

She said, she, her mother and her daughter had all been molested by at least two of the brothers over the years. The abuse against her mother was so bad as a child that she had to leave the family home and was fostered out.

DailyMail.com tracked the niece down to a home 100 miles from Seattle. Her husband said she did not want to speak. ‘She is not doing well,’ he said. DailyMail.com is not identifying her as she is an alleged victim of sexual abuse.

Charles, a former janitor at Seattle Children’s Hospital, was arrested at a Seattle nursing home where he had been living for less than a month. According to Newsweek, a detective walked in to the Aegis of Queen Anne on Galer facility, took a swab from Charles’s mouth as he slept and then woke him and started questioning him.

The two younger brothers were held at their home. They have been held in jail on $500,000 bail ever since.

Papers filed in Charles’s guardianship say he suffers from ‘severe’ dementia. ‘Mr. Emery will have continuing mental deficits which make it highly unlikely that he will recover from his challenges,’ the niece’s lawyer wrote.

He was taken to the hospital after his two brothers disappeared from the house. They returned on July 11 after a week, the papers say.

‘As a result of his dementia, Mr. Emery needs assistance with several activities of daily living,’ the lawyer wrote. ‘He needs prompting for dressing and personal hygiene grooming, bathing and oral care, as well as assistance with basic communication as he often repeats himself.

‘Mr. Emery suffers from memory loss. He has reported his truck was stolen over 14 times, despite the fact that he sold the truck himself.’ 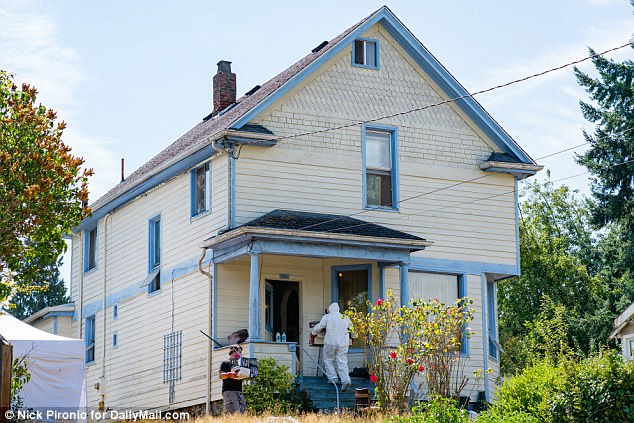 Police are pictured searching the Emery brothers’ home on August 21, as a tow company removed vintage cars from the shed on the property. Police say they discovered an immense collection of child pornography, girls’ clothing and disturbing writings about raping and murdering children inside their cluttered home 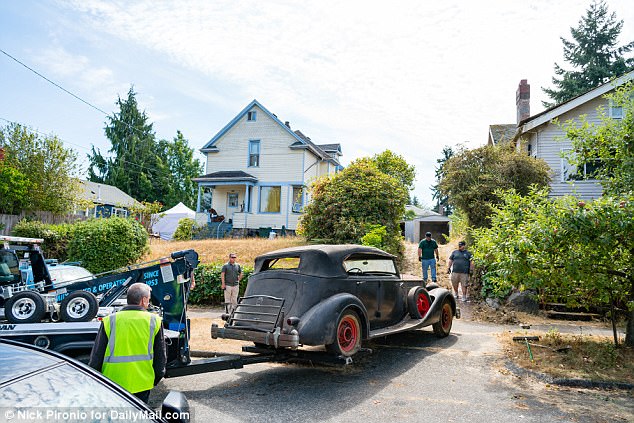 Cops spent weeks combing through the brothers’ house in Seattle. They took away three vehicles, including a World War II-era Packard Super Eight convertible and a Ford Model A from the 1930s

The papers said the hospital was ready to discharge Emery but the nursing home would not take him until they were paid a $13,000 entrance fee and a further $12,124 for the first month’s rent.

According to the papers, Charles Emery has around a quarter of a million dollars in the bank and receives a $3,100 pension from Boeing. He is expected to inherit up to another $150,000 from Donald’s will.

Cops spent weeks combing through the brothers’ house in Seattle. They took away three vehicles, including a World War II-era Packard Super Eight convertible and a Ford Model A from the 1930s.

Among the items discovered in the Seattle house were thousands of ‘images of minor female children both clothed and nude and engaged in sexually explicit conduct and lascivious display,’ according to a criminal complaint filed in court in the city.

Police found several miniature vodka bottles. One of them contained the initials of the brothers’ great-niece with the inscription that her ‘first half ounce of liquor came from this bottle.’

Also discovered were: ‘dozens of pairs of children’s shoes, most of which are penny loafer style shoes with pennies inserted in the front of the shoes; several pairs of minor female children style underwear containing stains and indicia of use; children’s socks; dozens of books and articles related to child homicide, child sexual assault, and missing and murdered female child victims to include both local and national cases,’ according to the complaint.

‘Of note, law enforcement discovered a pink child’s hat partially buried next to a burned handwritten letter (similar to those letters discovered in prior searches in which the sexual abuse and homicide of female children was contained) in a dirt crawl space,’ the complaint states.

The niece told police that when she was a child, Charles made her dress in penny loafer shoes and socks similar to those found in the house before the abuse. 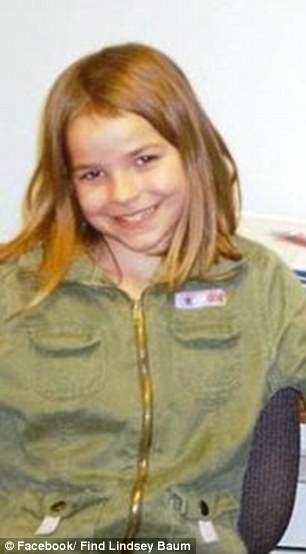 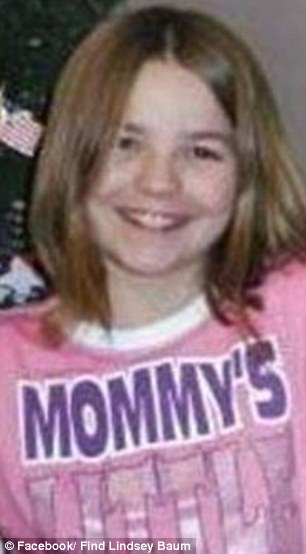 Cops are looking to see if the brothers may be connected to the case of 10-year-old Lindsey Baum (pictured), who disappeared from her home in 2009

The niece told cops she had burned some of the material before she realized just how awful it was.

One of them, Conine said, was a full-frontal picture of a girl estimated to be between 8 and 10, wearing only pink and orange hairpins, with an electric drill in her hands.

‘The image is designed to look like the cover of a magazine, and the word ‘Builders’ is headlined at the top of the photos,’ wrote Conine. The words ‘Put yourself in the hands of these absolutely astonishing and gifted builders. These tireless workers will build a castle of joy for you,’ are printed along the photograph.

The second picture of a naked girl appeared to come from a now-defunct website called ‘vestalgirls.com’.

‘They’ve had this obsession for most if not all of their lives and in some cases acted out on that obsession against family members.’

Edwards told DailyMail.com the search at the Shelton home could go on for weeks. 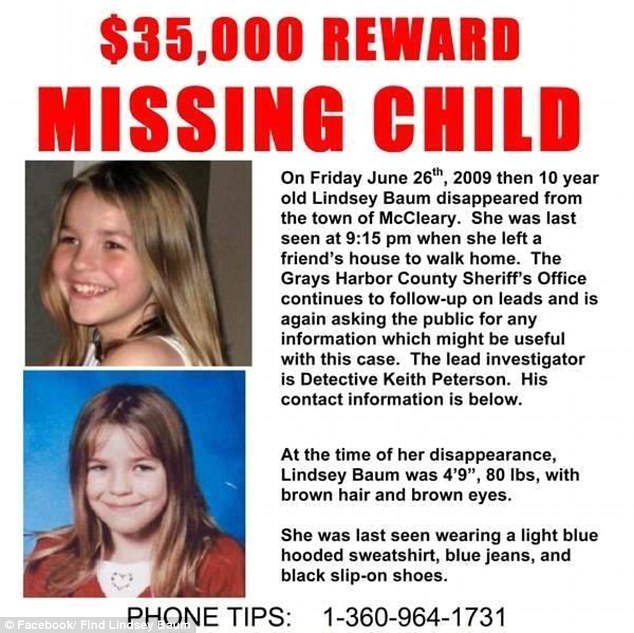 A flyer about the Baum case was found inside the Shelton home, where Charles Emery, 82, a former janitor at Seattle Children’s Hospital, lived part-time with his brother Donald, who died last October. She disappeared while on a 10-minute walk home from a friend’s house

‘We have something like 14 acres to cover and it’s not like it’s all flat. It is hilly and wooded and difficult going,’ he said

He stressed there is nothing definite linking the Emery brothers to any missing child. ‘But if we thought there was zero chance of finding anything there we would not be searching there,’ he added.

In a statement to DailyMail.com, Lindsey Baum’s cousin Jasmine Pierpoint said: ‘As this Emery brothers case is revealed, we find the thought of it horrific and unimaginable. It seems that as this case unfolds, that it will lead to answers for someone, if not for us regarding Lindsey.

‘It shouldn’t take a horrific scenario such as with the Emery brothers to bring the cases of all Missing Persons to light. We need to remind people that this sort of thing is real and it does happen and can touch.

‘We certainly hope that we find our answers and our truths about what happened to our Lindsey, be it with this case or another.‘