Wife reveals heartbreak after her husband, 30, died two days after the couple got married

A wife has told of her heartbreak after her husband died two days after the couple got married.

Gavin Howarth, 30, from Rochdale, was found to be suffering from multiple cancers in a shock diagnosis on Easter Sunday and given just two months to live.

Plans were quickly made for him and girlfriend Kirsty, 27, to marry, but when his health took a sudden turn for the worse on April 30, they ended up tying the knot in their front room of their Rochdale home that evening.

Kirsty Howarth, 27, from Rochdale, has spoken of her heartbreak after husband Gavin, 30, died two days after the couple got married. Pictured, the couple had one son together, three-year-old Lucian, and Gavin was also stepdad to Kirsty’s older son Bryce, seven 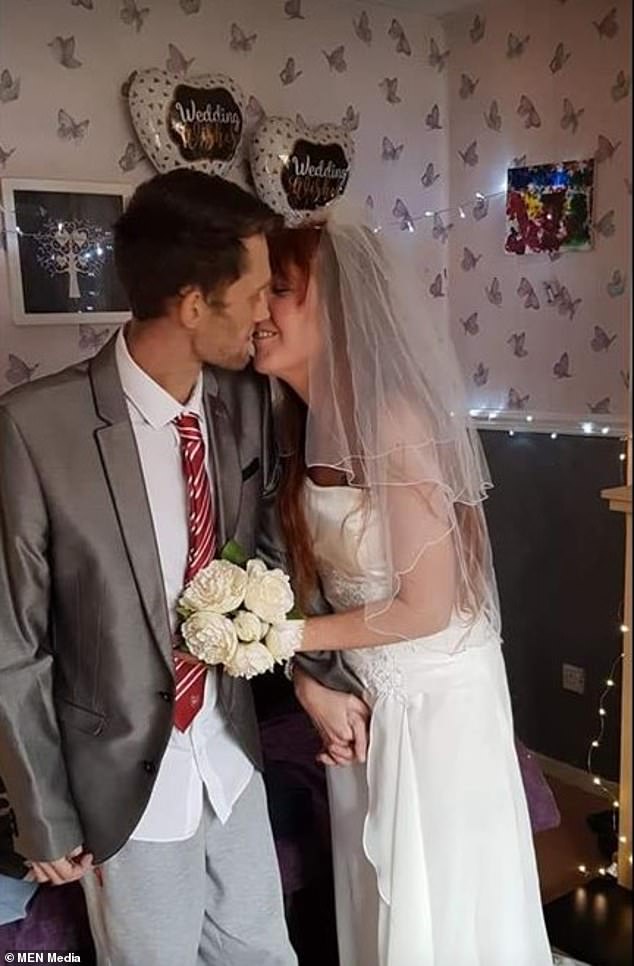 When Gavin’s health deteriorated on April 30, he and Kirsty ended up tying the knot in their front room of their Rochdale home that evening (pictured)

Kirsty’s mum Sandra Whittaker said: ‘They were a really special couple. Gavin was a great man, smiling all the time – he had a heart of gold.

‘He was a great dad, boyfriend and husband and a fantastic stepdad to Bryce – he knew his favourite superhero was Superman, so he went to pick him up from school one time all dressed up and took him to McDonalds. That’s the kind of person he was.’

Kirsty added: ‘I’ve been finding it quite hard but my kids have got me through. I have to keep going for them.

‘My eldest is up and down, sometimes he says he misses his daddy. The youngest doesn’t know too much of what’s going on but he just knows that daddy’s in heaven now.’

Kirsty and Gavin had discussed getting married before his diagnosis, but Sandra said they had waited as Gavin wanted to make sure they had enough money for him to give her everything she wanted.

He had shown symptoms of shortness of breath and severe back pain in the weeks before he finally visited a doctor for tests in March, but the family put this down to complications from his asthma. 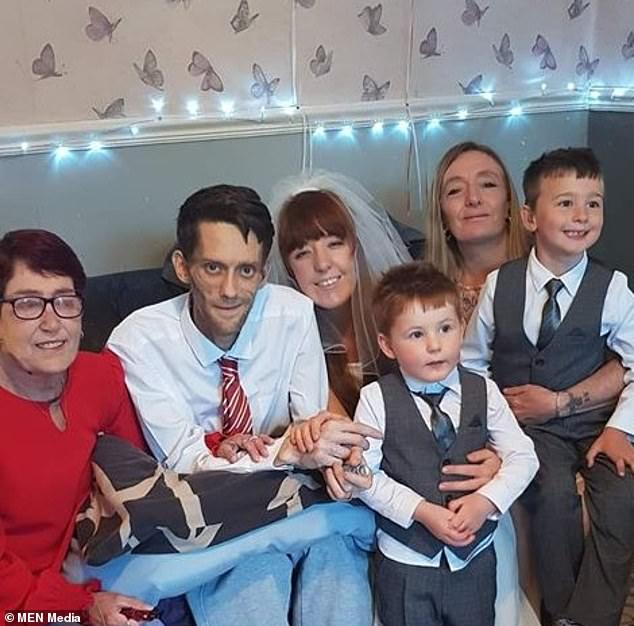 Kirsty (pictured on her wedding day with her family, and mum, Sandra) admitted she has been finding it quite hard but her kids have got her through

The family initially thought Gavin’s back pains were connected with the lifting involved in his work as a carpet fitter.

His pain was so severe that he left his job and went to work at at a fish and chip shop in October last year.

Having suffered from TB as a child and losing a lung in the process, Gavin initially underwent tests to determine whether it had come back – but doctors eventually discovered a lymphoma, as well as tumours in his liver, kidneys and brain.

When the couple realised that time was running out, friends, neighbours and local businesses rallied round to donate supplies for them to hold a wedding and reception in the garden of their home in Kirkholt on May 6.

Sandra said: ‘I had a group of about 10 or 12 friends who I thought could help and asked them to spread the word.

We were just overwhelmed by what people gave us – some gave us some white drapes or some artificial flowers to make the place look beautiful, people offered us a balloon arch and some pretty white fairy lights. 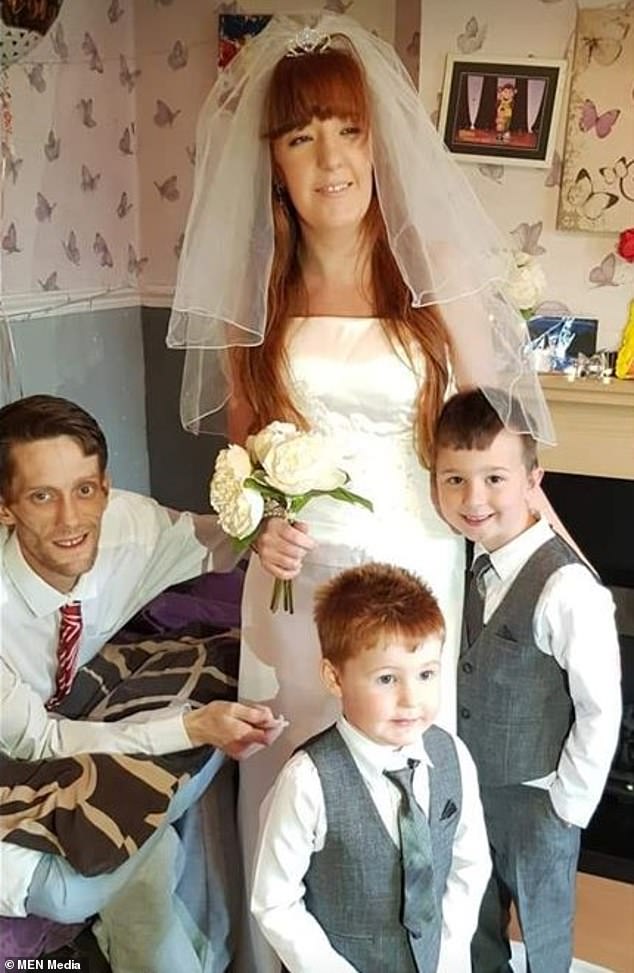 When the couple realised that time was running out, friends, neighbours and local businesses rallied round to donate supplies for them to hold a wedding and reception in the garden of their home in Kirkholt on May 6. Pictured, on their big day

‘My brother-in-law James Oldham spent three days doing up the garden, cleaning up all the stone work, planting flowers and making it nice for them.

‘Even though it didn’t end up happening in the garden, we still had people offering to come and do hair and make up and other nice things.’

Members of a local Facebook group donated equipment for the garden, whilst other support came from One Shop Weddings, who donated £1000 worth of wedding supplies, and Morrisons, which provided party food for the reception.

Sandra added: ‘Some people have donated money, people they don’t even know. I had no idea people could be so lovely – we only asked for a few items but to think of what we got, I just can’t say thank you enough.’

Preparations for the wedding continued as Kirsty became Gavin’s full time carer, having to administer a long list of painkillers to help him deal with the constant pain he was in.

Sandra said: ‘She rang me a few times saying ‘Mum, I don’t think I can do this’, but she’s a brave girl and much stronger than she realises.’ 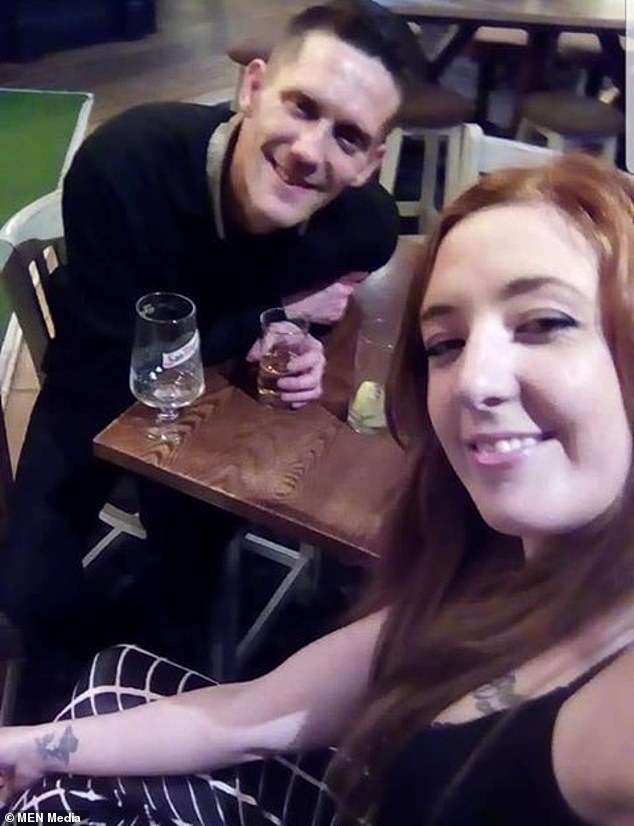 Gavin’s funeral took place at Rochdale Crematorium on Friday (May 15) with only a small number of close family members in attendance due to coronavirus restrictions. Pictured, Gavin and Kirsty

Gavin’s eyesight deteriorated sharply following his diagnosis, so friends of the couple clubbed together to buy them a bigger TV as well as a PS4 – however he was never able to use the latter before his death.

Sandra also paid tribute to nurses from Rochdale’s Springhill Hospice who made visits to the couple’s home to help Kirsty during Gavin’s final weeks.

It was after a nursing visit on April 30 that Kirsty was advised to push the wedding forward as Gavin didn’t have long left.

Two registrars were able to come to the house that evening, and Kirsty and Gavin were married at 6pm with just their two boys, Sandra, Gavin’s mum Mandy and the two registrars in the room.

Gavin’s brother Lee and sister Gina and Kirsty’s dad Karl watched the ceremony from the garden.

Gavin’s funeral took place at Rochdale Crematorium on Friday (May 15) with only a small number of close family members in attendance due to coronavirus restrictions.

His funeral cortege passed by the chip shop where he worked, as staff stood outside to pay their respects.