Will Grigg’s second-half strike secured a stunning 1-0 victory for Wigan which sent 10-man Manchester City crashing out of the FA Cup.

Fabian Delph’s dismissal on the stroke of half-time did little to stem the flow of City attacks in the second half but the visitors failed to find a breakthrough.

They were caught on the break in the 79th minute when Grigg capitalised on a mistake from Kyle Walker and slotted past Claudio Bravo.

Here, Sportsmail rounds up all the things you may have missed from DW Stadium.

John Stones is still struggling to capture his early season form after that hamstring injury before Christmas. He looked jittery and unusually indecisive when balls went were there to attack. The central defender shrugged off a knock, although seemed uneasy before and after up against Will Grigg. Perhaps that is partly down to the pressure of forming a new partnership with Aymeric Laporte. 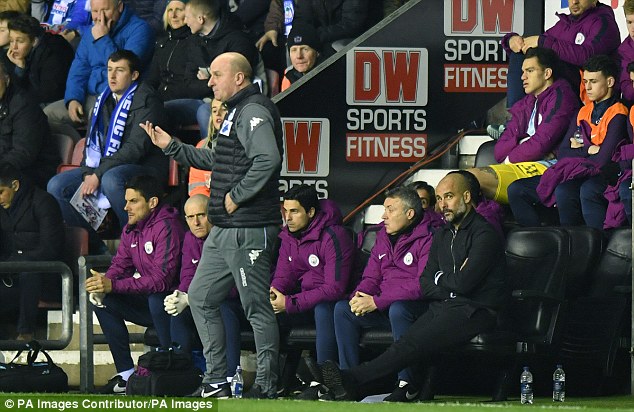 This is beginning to look like a slow, painful goodbye for Yaya Toure at the Etihad. Guardiola has insisted in recent weeks that ‘it is up to him’ whether Toure fights a way back into his thinking and not being named on the bench – with both Phil Foden and Brahim Diaz picked ahead of him – is another low point in his final season. 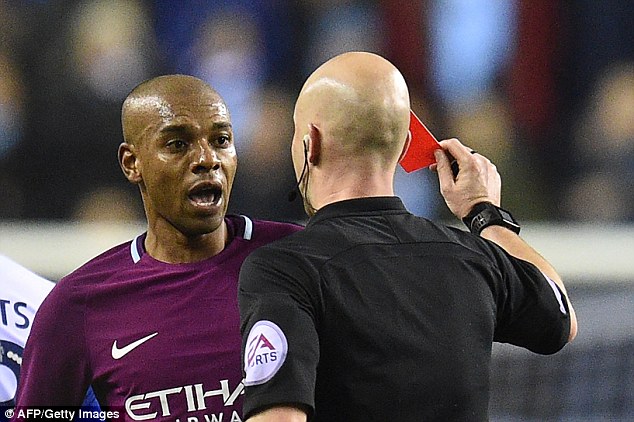 Given his recent protestations surrounding protection of players, Pep Guardiola can have no complaints at Anthony Taylor’s decision to send Delph off for a reckless lunge on Max Power. His disagreement with Cook continued in the tunnel before the BBC decided to cut away from the handbags. Perhaps Amazon Prime, shooting a documentary on City’s season, will be able to shed more light. 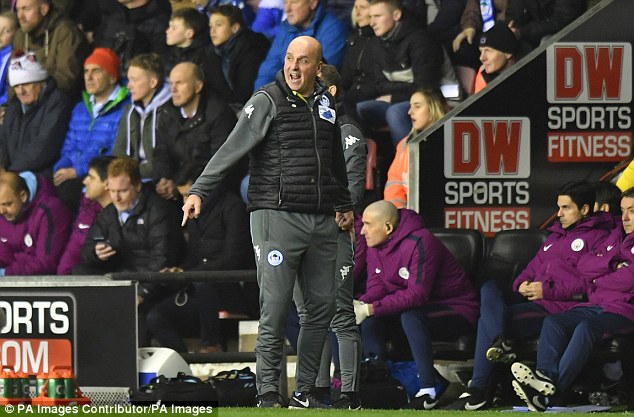 Wigan manager Paul Cook appeared happy enough for his team to seemingly ignore direct orders early on. He allowed a throw-in the hosts had won to roll past him and pleaded with Nick Powell to slow a free-kick down rather than take it quickly after spotting Gary Roberts rushing through. That urgency and energy made this such an engaging cup tie, set alight long before Fabian Delph’s red card.

Wigan chairman David Sharpe admitted this week that the DW Stadium is too big for them and the hardcore support stands at around 8,000. That won’t change massively, according to Sharpe, even after new money is invested following protracted takeover talks. Even though the Latics were supported vociferously last night, a few sparse areas were not difficult to locate.