Deep in the forest in the Charlevoix region of Quebec is a clearing, and in it a bear whisperer. His name is Monsieur Denis Laliberte and we are watching his black bears eating corn and apples under a buttery sun.

Laliberte tells me that, if I ever meet a bear close up, I am to ‘speak softly, yet directly, perhaps even recite a poem — but only in French’. Crikey.

As we watch in silence, Laliberte points out each black, glossy bear. He has given them all names.

Call of the wild: In the eastern parts of Quebec, bear, moose and whale watching are all possible just a couple of hours’ drive from Montreal and Quebec City

Then he wanders among them, and some even take bananas from his hand. Nobody moves. We are in awe.

In this eastern part of Quebec, bear, moose and whale watching are all possible just a couple of hours’ drive from Montreal and Quebec City. So you can combine natural wonders with city thrills in a short trip.

The Foret Montmorency, near Quebec City, is moose country and we spot the enormous beasts almost immediately.

Out on the wide St Lawrence River, a zodiac boat takes us whale watching. We wonder at awesome humpbacks and beluga as they swim solemnly by.

Of course, it’s all a far cry from Montreal, where our journey begins. This is the second-largest French-speaking city in the world, after Paris, and is where local girl Celine Dion was married in the grand Notre-Dame Basilica and maple syrup is served with everything.

Yes, there are designer shops and boutique hotels, but there are also old-fashioned cabaret supper clubs, where live bands and dancing accompany dinner. Bistro Cabaret Le Fripon reminds me of Paris in the Seventies.

And here on the Place Jacques-Cartier, it’s both French — big outdoor cafe terraces — and North American, in the form of the traditional Courthouse. In Quebec, public transport is easy and comfortable. From Montreal, the region’s capital, Quebec City, is only a three-hour train ride through fabulous autumn foliage. You alight at the Gare du Palais, a 100-year-old listed building. 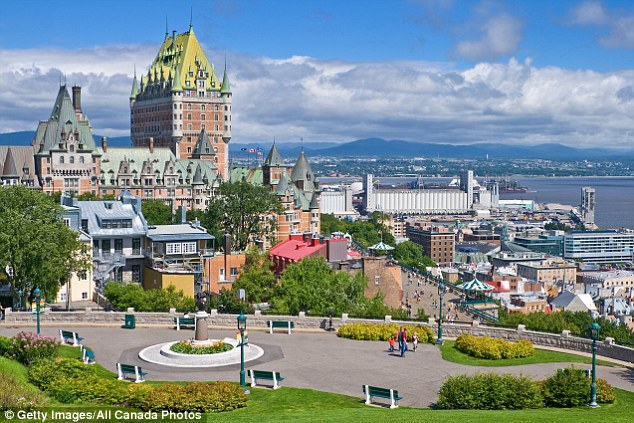 Pretty persuasion: In Quebec, public transport is easy and comfortable. From Montreal, the region’s capital, Quebec City, is only a three-hour train ride through fabulous autumn foliage

I walk through the Old Port district, admire the Citadelle walls and do a spot of Christmas shopping on Rue Saint-Jean, where shops sell handmade bijoux bangles and silk dresses.

From Quebec City, the Train de Charlevoix takes me to the quaint town of Baie-Saint-Paul, where mountains roll down through farmland to the river’s beaches and salt estuaries. This is known as the Charlevoix region, and it is famous for food and the Cirque du Soleil.

The extraordinary circus show was founded here by the owner of the Hotel Le Germain, who bought an old train track and rundown farm, reinstated the train service to Quebec City on the former and turned the latter into a funky hotel. In the Charlevoix region, you can follow the Flavour Trail — where around 60 restaurants and producers display a symbol which indicates that they use local produce.

We visit an emu farm and a cheesemaker and take a horse-drawn carriage ride around Baie-Saint-Paul.

You are spoilt for choice when it comes to dining, but I especially like the Maison du Bootlegger, near La Malbaie. Here, an old wooden house conceals creaky doors and secret passages. It opened in 1940 during the temperance movement. Alcohol arrived in the night and locals would party in the attic.

Today, there’s a rocking restaurant with a live band. Apparently, in 1970, Elvis dropped by.

Quebec is full of surprises — not least French-speaking bear whisperers.

Travel Facts: Plan your own break in Canada