A beautiful image of two male lions rubbing each other’s faces in Tanzania has been crowned the People’s Choice wildlife photo of the year.

It was taken by New Zealander David Lloyd, who said the animals had lovingly rubbed their faces with their manes entangled for 30 seconds before they settled down again.

He said the image ‘illustrates the emotion and feeling of animals and emphasises that this is not limited to humans’.

Also highly commended were a photo of three king penguins on a beach during an idyllic sunrise in the Falkland Islands, and a playful image of three African wild dogs fighting over an impala’s leg in South Africa.

A sorrowful image of a starving polar bear in the Canadian Arctic and an urban scene of a real-life fox next to a painted comrade in North London completed this year’s top five.

Lions: The winning entry, this picture entitled ‘Bond of Brothers’ was taken in Tanzania by David Lloyd, a New Zealander living in the UK. Describing it, he said the two animals had rubbed faces for around 30 seconds before they settled down again, in a loving picture captured close up in black-and-white. The photographer said the image ‘illustrates the emotion and feeling of animals and emphasises that this is not limited to humans’. The Natural History Museum’s director Sir Michael Dixon said the winning picture ‘provides a glimpse into the inner world’ of lions. It was the winning entry among 45,000 pictures submitted for the awards, which were cut down to a shortlist of 25 and put to a public vote of some 16,000 nature lovers 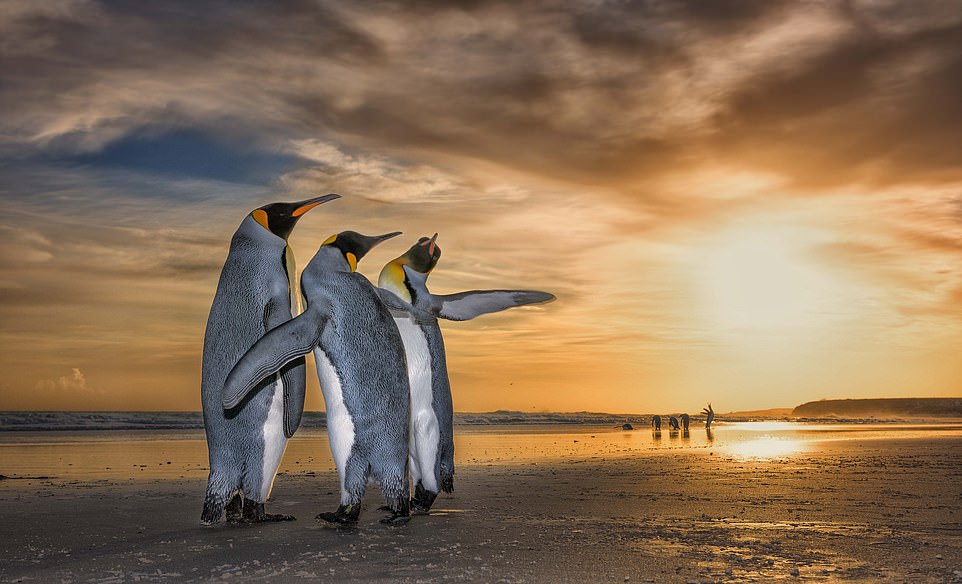 Penguins: This picture by South African contestant Wim Van Den Heever was highly commended in the wildlife photography awards. Entitled Three Kings, it was taken at sunrise on a beach in the Falkland Islands, Britain’s overseas territory in the south Atlantic. The photographer said two males had been fighting over a female, using their flippers to fight each other off. These are king penguins, one of the five types of the flightless bird which live on the islands. There are up to 19 species in total 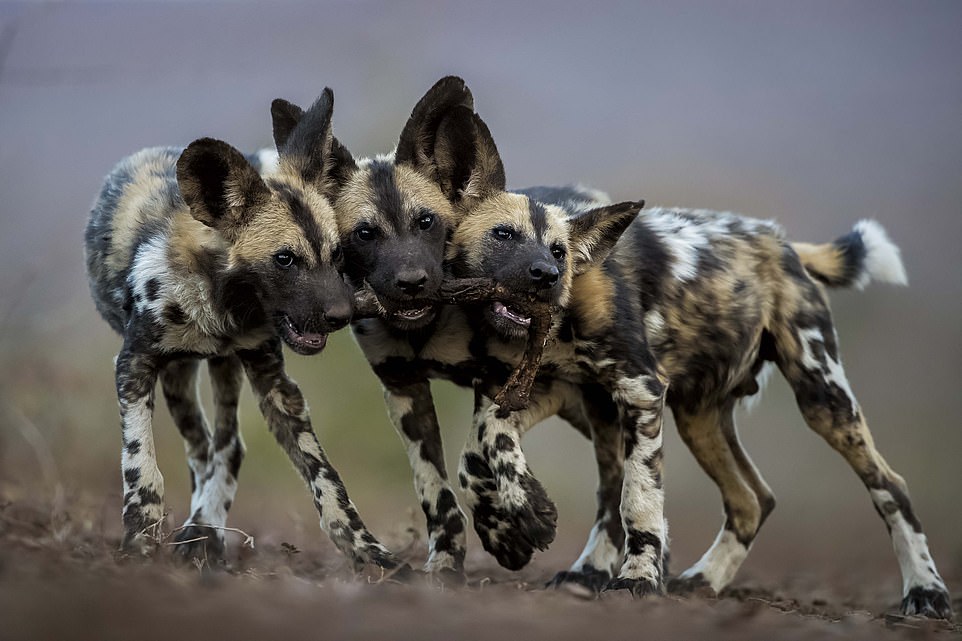 African wild dog: This picture is called One Toy, Three Dogs, and was taken by Hungarian entrant Bence Mate in Mkuze in South Africa. He said the three dogs had all wanted to play with the leg of an impala and were trying to drag it in different directions, leading to this action shot where a part of the leg is in all three of the animals’ mouths. The Natural History Museum said adult African wild dogs are merciless killers, but their pups are extremely cute and play all day long. The species is considered ‘one of the world’s most engangered mammals’ by world wildlife bosses with fewer than 7,000 left 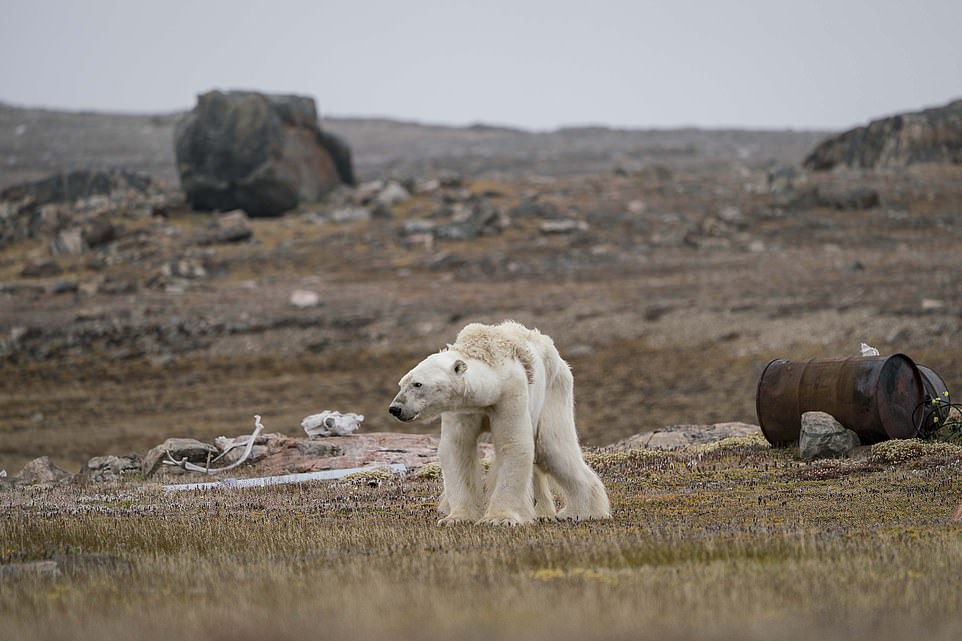 Polar bear: This picture by American contestant Justin Hofman was taken in the Canadian Arctic, with the heartbreaking title: ‘A Polar Bear’s Struggle’. It shows the hungry animal in an abandoned hunter’s camp, a scene which the photographer said left his ‘whole body pained’ as he watched the animal struggle to stand up. The World Wide Fund for Nature describes polar bears as ‘vulnerable’ because of the disappearance of their sea ice habitat as a result of climate change 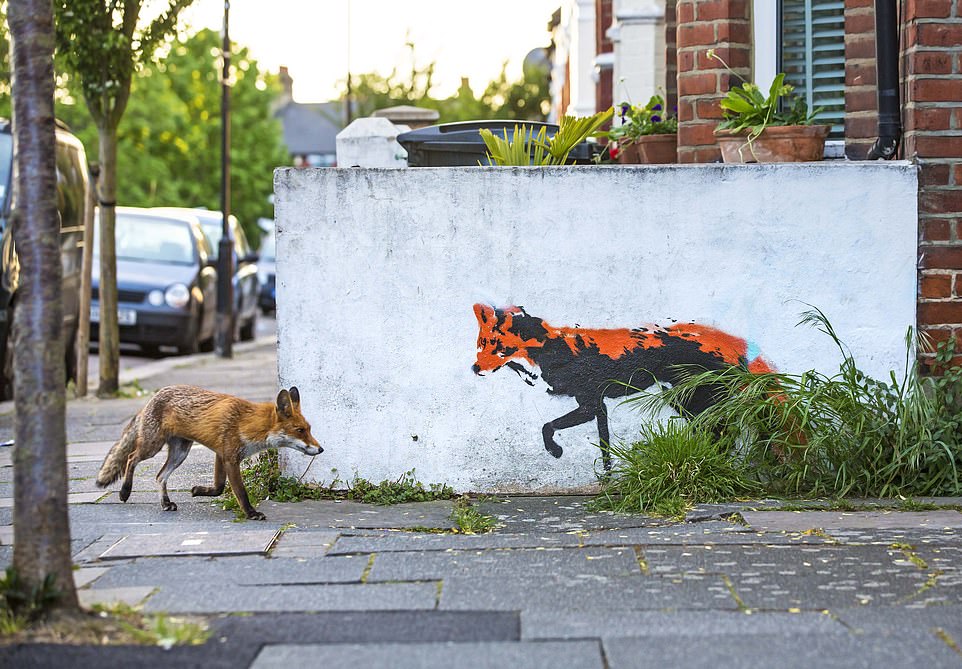 Fox Meets Fox: This clever image taken by British contestant Matthew Maran takes the competition away from the desolate wilderness of nature and into suburban North London, where he captured this picture of a real-life fox next to its painted counterpart. He said he had been photographing foxes close to his home for more than a year, and had dreamed of taking a picture like this one ever since he spotted the street art on a wall. After countless hours and many failed attempts his persistence paid off as he took the perfect picture of a fox in daylight