Will coming off statins put my heart at risk? DR MARTIN SCURR answers your health questions

After nearly 25 years taking statins, I’ve been moved off them by my doctor because a blood test showed I have abnormal levels of liver enzymes. I’m 70, eat healthily and exercise daily, but I have a family history of high cholesterol. I’m worried about stopping these drugs.

I can understand your concern. As you explain in your longer letter, both your parents died before the age of 60 from heart disease, and this genetic medical history represents a major risk factor for developing heart disease yourself.

It’s a good idea for those with a family history of heart disease to take statins. The drugs work by lowering low-density lipoprotein (LDL) or ‘bad’ cholesterol, and are known to reduce cardiovascular risk — in other words, the chances of developing heart disease or having a heart attack or stroke — by 20 per cent to 30 per cent in people who are at greater risk.

Family history is one of several factors that increase risk — the others are smoking, high cholesterol levels, high blood pressure and a sedentary lifestyle.

As you explain in your longer letter, both your parents died before the age of 60 from heart disease, and this genetic medical history represents a major risk factor for developing heart disease yourself

Statins have much lower rates of adverse reactions than most other types of cholesterol-lowering drugs — but abnormal liver function does occur in a very small percentage of patients (between 0.5 per cent and 3 per cent), though normally in the first three months after starting treatment. This can only be identified through routine blood tests.

However, even then, several studies have shown that people taking a placebo pill can also have raised liver-enzyme levels — that’s why doctors tend to allow for enzyme levels to be up to three times the normal range before they take a patient off their statin.

What strikes me as unusual in your story is that the higher liver-enzyme level was only spotted recently, despite your two decades on these drugs. This is why you’ve been referred to a specialist.

The recent nature of this makes me wonder if there might be another cause and, if so, whether it might be worth only temporarily stopping the statins — perhaps for three to six months — to see if the levels return to normal. A short period without the cholesterol suppression provided by statins should not put you in danger.

There’s also the option of trying a different medication — the newly licensed PCSK9 inhibitors. These are highly effective drugs for lowering LDL cholesterol. The two available on the NHS, evolocumab and alirocumab, can only be prescribed by a consultant.

They are usually given by monthly injection and — key in your case — they don’t have the same side-effects as statins. It’s likely that your specialist will recommend this form of treatment.

The morning after my fourth Covid jab, I tested positive for the virus. Does that mean this fourth jab was ineffective, and am I eligible for another?

What has happened here is that when you received your fourth dose of the vaccine, you were already incubating the Covid virus — but at that moment the quantity of virus in your body was probably too low to be detected by the lateral flow test you took. Twenty-four hours later, viral replication was so great that it resulted in a positive test.

The fourth immunisation itself would not cause a ‘positive’ test result, as it’s not a live virus.

Normally, Covid immunisation is not recommended until 28 days after a positive test result or the onset of symptoms, to allow people a chance to recover from the virus and to ensure they are no longer infectious. In addition, it could cause their immune system to overreact and make them feel ill.

This delay is not because the virus will undermine the vaccine.

Having looked at the available evidence, there are no grounds for concluding that your fourth injection was ineffective. 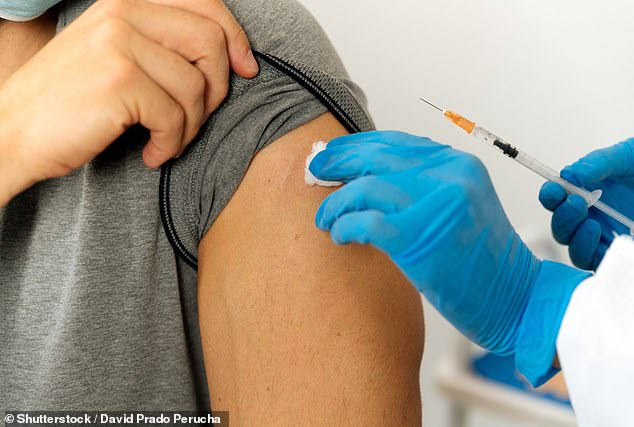 The fourth immunisation itself would not cause a ‘positive’ test result, as it’s not a live virus. A file photo is used above

In my view…ME needs better research and care

I was delighted when Health Secretary Sajid Javid recently announced a push for more research and better care for patients with myalgic encephalomyelitis (ME).

For years, doctors tended to view the illness as having its roots in a psychological, rather than biological, cause. But the more time I spent with patients, the more obvious it seemed to me that they had a seriously misunderstood condition.

While the exact cause is still not clear, we know now that ME is a physical disorder, and if psychology and emotion come into the picture it is only as a result of being so ill (and so wrongly diagnosed).

In ME patients, there are abnormalities in the way their muscle cells function, so when they exercise, less energy is supplied to the muscles, as opposed to the increase seen in healthy people. There’s also evidence their adrenal glands — which produce adrenaline and cortisol, hormones critical for wellbeing, energy and immunity — are much smaller.

For the 250,000 UK patients who suffer from this disabling illness, better understanding — and new treatments — can’t come soon enough.