Will every person over 50 get a flu jab on the NHS this winter?

Every Briton over 50 could be offered a free flu jab this winter as Ministers ‘consider all options’ to avoid a double-whammy scenario of a bad flu season and a second wave of Covid-19.

‘It’s still under discussion and will depend on vaccine stocks, but it makes sense to extend the programme if it’s possible,’ a source told this newspaper, who added that it is ‘highly likely’ that the flu vaccination will finally become mandatory for all healthcare workers and care home staff – a move long called for by doctors.

Last week, Health Secretary Matt Hancock hinted the UK was preparing for ‘the biggest flu vaccination programme in history’ as experts warned a resurgence of Covid-19 could lead to 120,000 deaths over nine months.

A severe winter or flu epidemic on top of more coronavirus infections could create a perfect storm, overwhelming the NHS, leading to more deaths and cancelled operations.

Last week, Health Secretary Matt Hancock hinted the UK was preparing for ‘the biggest flu vaccination programme in history’ as experts warned a resurgence of Covid-19 could lead to 120,000 deaths over nine months

Currently, the vaccine is offered on the NHS to everyone at high risk of flu – those over 65 or people who have health conditions such as diabetes and heart disease, and pregnant women.

Children aged two to ten are offered the flu vaccine – given as a nasal spray – not because they suffer severe symptoms, but because they carry and spread the disease to other family members.

Inoculation is particularly effective in children. Last year it was found to offer protection in almost 90 per cent of cases, compared with just 39 per cent effectiveness in working-age adults.

While no official word has been given about extending the flu programme, insiders have said over-50s are a likely target as this is the age when coronavirus risk begins to mount.

Last month, Downing Street said Ministers were trying to secure a ‘significant additional supply’ of vaccines so more people could be made eligible for a free injection.

The benefit of vaccinating more people against flu would be twofold, said Professor Brendan Wren, an expert in infectious diseases as the London School of Hygiene and Tropical Medicine.

‘There is a worry that many people with severe flu, as well as Covid-19 patients, could overwhelm the NHS, but there is also a risk of concurrent infection with flu and Covid-19,’ he said. ‘It’s too early to know for sure, but having both at the same time could mean a far more severe illness.’

The combined effect of a flu epidemic and Covid-19 would also complicate track and trace enormously, other experts have warned.

Last winter, roughly two-thirds of over-65s had a flu jab, however, under 50 per cent of working-age adults and children were vaccinated, including at-risk groups.

‘There are all sorts of reasons for flu vaccination hesitancy,’ said science broadcaster Vivienne Parry, who sat on the Government’s Joint Committee on Vaccination and Immunisation during the 2009 Swine Flu pandemic. ‘People don’t think of flu as serious, and there is a misconception that the vaccine causes illness.’

In 2018, the Government admitted the vaccine had ‘failed to work’ for the vast majority of people. 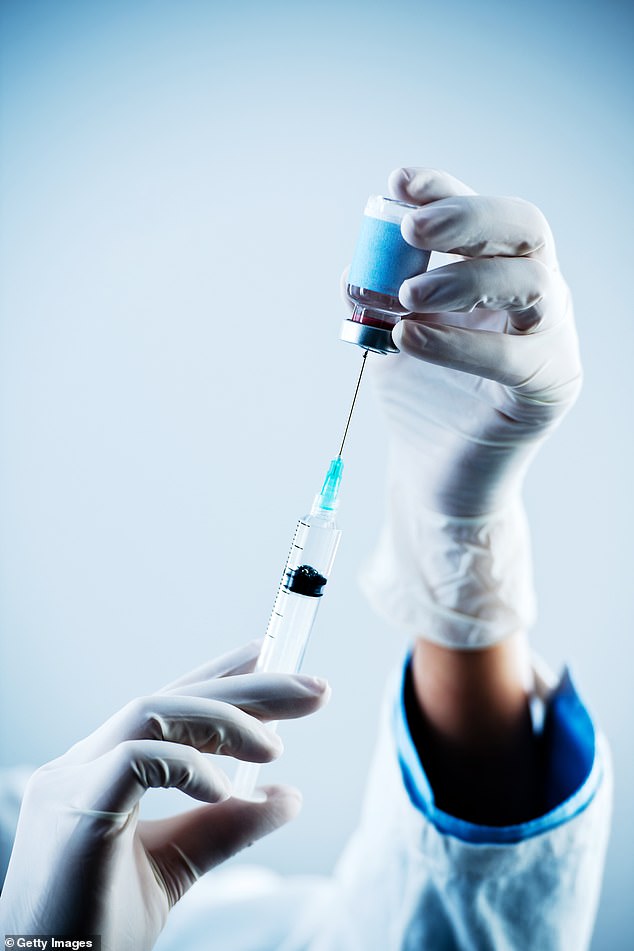 Currently, the vaccine is offered on the NHS to everyone at high risk of flu – those over 65 or people who have health conditions such as diabetes and heart disease, and pregnant women

Just 15 per cent of the 15 million people who’d had the jab were fully protected, making it far less effective than previous years. The problem was particularly acute in over-65s, whose immune systems are already less responsive – just ten per cent were protected, which contributed to the worst flu season for seven years, with double the number of average deaths.

Flu viruses mutate each year, which is one reason a new jab has to be given annually.

Experts from the World Health Organisation predict each February which strains are most likely to be dominant the following winter, and the vaccine is formulated, months in advance.

However, in 2017, mutations to the ‘Aussie flu’ strain, and the surprise emergence of influenza B, or ‘Japanese flu’, meant the vaccine was ineffective by the time it was being administered.

Since then, over-65s have been offered a new, powerful formula which is vastly more effective.

The rumoured move to make the flu jab compulsory for healthcare workers will spark debate. Surprisingly, uptake is remarkably low among NHS staff. While 70 per cent have the vaccine overall, there is huge variability between health trusts, with some reporting an uptake rate of just 40 per cent.

In 2018, Sir Bruce Keogh, then the National Medical Director of NHS England, claimed thousands of healthcare workers were ‘putting patients and their own families at risk’ by not having the flu jab. Former Chief Medical Officer Dame Sally Davies described them as ‘selfish’, and suggested they should be forced to wear a badge stating their vaccination status.

Yet last year a Nursing Standard survey suggested more than a third opposed compulsory flu jabs. ‘Part of the reason some trusts have such dismal uptake is practical – they’re just not making it easy enough, a bit like putting Covid testing in car parks that no one can get to,’ said Parry.

‘But there’s also a remarkable amount of hesitancy, especially in nurses. Many healthcare workers think, wrongly, that flu isn’t serious and so they don’t need to bother – even nurses working with patients on respiratory wards decided not to have the jab.’

She added: ‘One hopes, thanks to the pandemic, people will be receptive to having the vaccine. But there will need to be a concerted public health campaign to try to get numbers up this year – the last thing anyone wants is to buy-in huge numbers of jabs, only to have to throw them away.’

Prof Wren said: ‘Getting as many people as possible to have the flu jab will only be a good thing.’