Will Sainsbury’s supermarket bank bounce back after £21m loss?

The banking arm of Britain’s second-largest supermarket chain delivered a rotten set of results on Wednesday as it revealed a £48million profit in 2019-20 turned into a loss of £21million.

In an announcement which contained a basketful of bad news, Sainsbury’s Bank revealed its income fell 23 per cent to £341million, deposits fell 19 per cent to £5.1billion, lending dropped 27 per cent to £5.4billion and its customer numbers slid by 14 per cent to 1.8million.

However, despite the tough year, the bank remained bullish on its future. The supermarket said it expected its financial services arm, bought outright from Lloyds Banking Group in 2013, to return to profit next year and then to double it by 2024.

In the red: Sainsbury’s financial services arm tumbled to a £21m loss in the 12 months to the end of February 2021

The coronavirus pandemic hit the supermarket bank’s credit card and personal loan lending, which fell £600million and £800million, respectively, and saw demand for travel money and cash withdrawals dry up, which also helped to tip it into a loss.

But while it expects lending and demand to recover, the results also indicate a bank in transition.

Once seen, along with rival Tesco Bank, as an upstart challenger to Britain’s major high street names in the early and mid-2010s, it formally surrendered in September 2019 when it pulled out of the mortgage market.

Having failed to make any headway in a ferociously competitive and increasingly unprofitable market, it decided to cut its losses.

Andrew Montlake, managing director at mortgage broker Coreco, told This is Money at the time that the ‘margins were no longer there and its mortgage division was almost certainly struggling to wash its own face.’

Following this, mortgage lending fell £600million in the 12 months to February 2021, with more of the currently £1.3billion in mortgage assets expected to fall off its books in the next 12 months. It required fewer deposit takings from savers as a result. 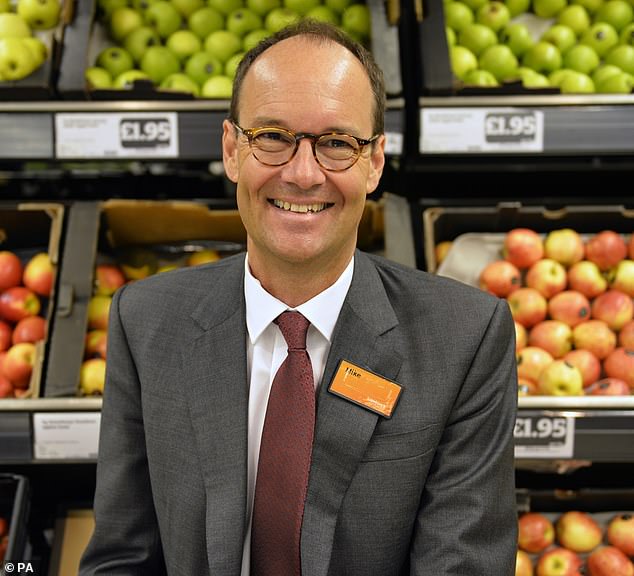 Not so in the money: Former Sainsbury’s chief executive Mike Coupe turned off the money taps for Sainsbury’s Bank in September 2019

Former chief executive Mike Coupe two years ago announced the supermarket would no longer plough any more capital into the bank, which along with the exit from the mortgage market kiboshed any pretence it was a real challenger.

In response to Wednesday’s results, Clive Black, head of research at Shore Capital, said: ‘Sainsbury’s Bank has been a car crash for some years now, with massive capital and operating expenditure delivering derisory returns.

‘Mike Coupe decided to stop the funds tap’, which he estimated had been as much as £1.4billion, while ‘new management was brought in and a much more focused bank has been created. Like Tesco, the challenger bank went some time ago.’ 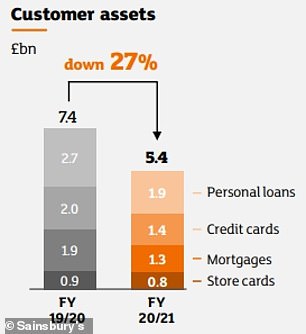 The bank insisted it did not expect to require any more capital, and Black noted that ‘the headline numbers were skewed by the first-half performance in 2020.

‘The second half was better and we sense it is on course for the headline target to double 2019 profits by 2024, albeit that is still a poor return on investment.’

Given it appears to be banking on a rebound in demand from current and new customers for everything from credit cards to travel money, rather than from new products, it best hope its calculations are correct.

After all, there does not appear to be any cavalry coming over the hill. Although it was reported late last year the supermarket was putting Sainsbury’s Bank and its now £5.4billion balance sheet up for sale, there do not appear to have been any takers.

Dr Black added: ‘Sainsbury’s was approached last year about a bid but nothing was stated yesterday, which suggests to us that interest may have cooled.

‘Ongoing work would probably have been at least alluded to. It looks like it is back to the original plan.’

However, some were more sceptical of the bank’s prospects and suspected the supermarket was still looking for the checkout.

James Blower, founder of The Savings Guru and an adviser to savings banks, said: ‘The results are a fascinating read. Although the pandemic has impacted the bank, lending fell by £2billion overall, with all areas impacted and income from travel money and ATMs hit too.

‘While Sainsbury’s believes it has a strategy to turn things around, there are other players who do credit cards and loans better, who can also access funds cheaply from retail savings.

‘Given this, I’d be surprised if a more likely outcome wasn’t that Sainsbury’s looked to sell their financial services division and come out of the space.’