REVEALED: Woke Wimbledon will DITCH the titles ‘Miss’ and ‘Mrs’ in front of the names of past female winners on its famous honours boards ahead of this year’s controversial tournament

Wimbledon has decided to remove the titles ‘Miss and ‘Mrs’ in front of past female winners on the famous honours boards.

The All England Lawn Tennis Club’s winners boards – with the most prominent being in the clubhouse – have the honorifics in front of female winners, but not men.

From the start of the tournament in 1884, the female winner has had her title-first-name initial-surname on the board, with last year’s winner Ashleigh Barty reading ‘Miss A Barty.’

Yet the men’s winner, Novak Djokovic, was just N Djokovic and having dropped using ‘Miss’ and ‘Mrs’ when umpires announced the names of female players during matches in 2019, the AELTC have modernised further by updating the honours boards so the women’s names also now go by first-name initial, then surname.

The decision, revealed by The Times, comes as Wimbledon deal with the backlash following their announcement to ban Russian and Belarusian players from competing in this year’s Championships.

The ATP, WTA and ITF responded by stating that no ranking points would be awarded for the Grand Slam event, rendering Wimbledon effectively an exhibition from a rankings point-of-view.

The report in The Times states that Wimbledon insiders have agreed to the honours board change ‘to move with the times and the use of titles had become an anachronism in an age of increasing equality.’

The process of married women taking the initials and surnames of their husbands will also be updated.

For example, Chris Evert’s 1981 title triumph will be changed from ‘Mrs J M Lloyd’ – a result of her marriage to John Lloyd – to ‘C Evert Lloyd.’

However, the tournament will continue to label the events as Gentlemen’s and  Ladies, as opposed to the man’s and the ladies.

Six-time winner Novak Djokovic, when Wimbledon changed the ‘Miss’ and ‘Mrs’ rules when announcing the names of players during matches in 2019, said he was ‘quite surprised’ by the change.

‘I thought that tradition was very unique and very special; I thought it was nice,’ he said three years ago.

‘It’s definitely not easy to alter or change any traditions here that have been present for many years. It’s quite surprising that they’ve done that.’

With regards to the lack of ranking points available at this year’s Championships, Andy Murray stated on Wednesday that Wimbledon will ‘never be an exhibition’.

The 35-year-old Scot, twice a champion at SW19, has stayed neutral on banning Russian players, but is riled by claims the points ban diminishes the event. 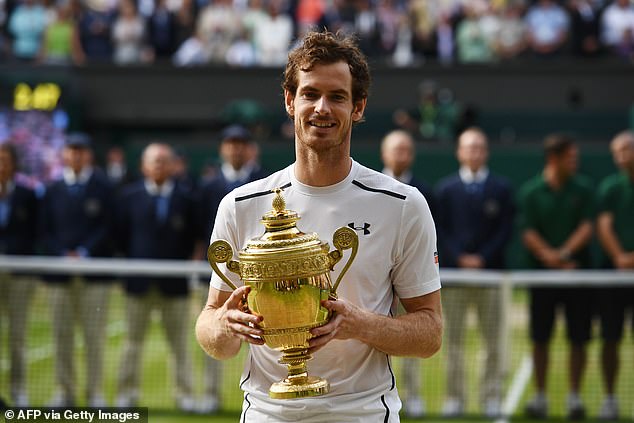 ‘I follow golf closely and have no idea how many ranking points the winner of the Masters gets,’ he said via social media.

‘Me and my friends love football and none of us know or care how many ranking points a team gets for winning the World Cup, but I could tell you exactly who won.

‘Most people watching Wimbledon wouldn’t know or care how many points a player gets for winning a third- round match.