Windsor Castle: From William the Conqueror to Prince Harry’s wedding

It’s the oldest and biggest occupied castle in the world and has been home to 39 monarchs. And it will shortly play host to Prince Harry and Meghan Markle’s wedding.

But the story of Windsor Castle begins with a wooden fortress, built by William the Conqueror in the 11th century.

In the decade after the Norman invasion of 1066, he had it constructed to guard the Thames Valley. Today, all that remains of this structure is the mound on which the castle’s iconic Round Tower stands.

Over the years, the castle grew considerably, with notable changes including vineyards planted by Henry II in the 12th century, and Elizabeth I’s long gallery, built in 1583 for the Queen to take walks in bad weather.

Now, archaeologists and researchers have calculated that the original ‘Windsor’ was just a fifth of its present size.

Their findings are revealed in a new book – Windsor Castle: A Thousand Years of a Royal Palace – complete with artist’s impressions of what the site would have looked like in its early days.

Based on the evidence of new research, historic manuscripts, drawings and paintings, and recent GPS surveys, the illustrations include Henry VIII’s private chamber and the original St George’s Chapel – where the Prince and his American sweetheart will tie the knot on May 19.

WINDSOR CASTLE IN ITS EARLIEST FORM, 1086: This illustration shows Windsor as a motte-and-bailey castle – ‘motte’ being a mound, and ‘bailey’ an enclosed courtyard. It was a defensive fortress built by William I (reign, 1066-1087) circa 1086 to guard the Thames valley. All that remains of this structure today is the mound on which Windsor Castle’s iconic Round Tower stands 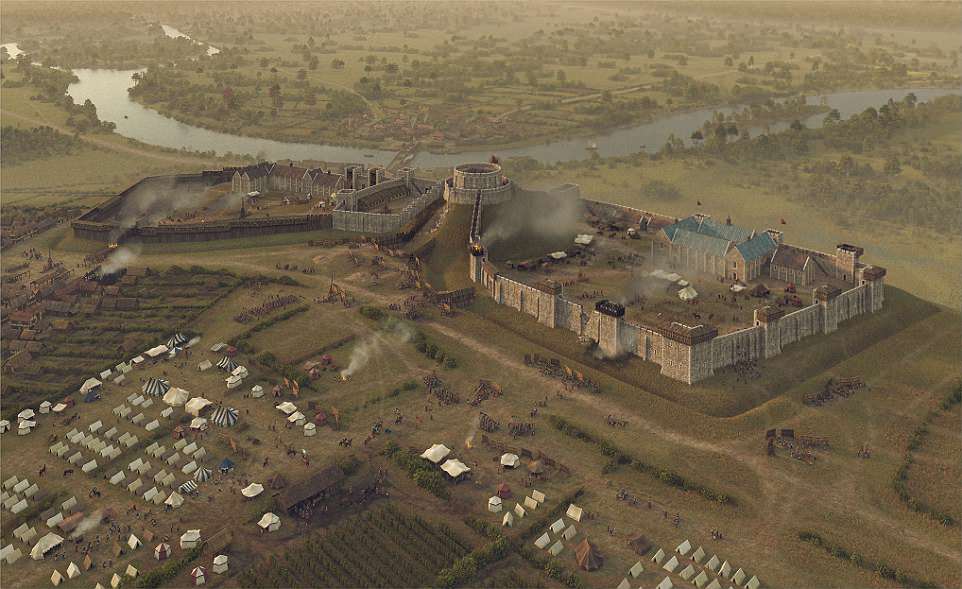 THE CASTLE DURING THE SIEGE OF 1216. The failure by King John (reign, 1199–1216) to honour the commitments set out in the Magna Carta led to civil war. The rebel barons offered the throne of England to Louis, son of Philip II of France, who landed at Sandwich with a French army in May 1216. This drawing shows Windsor Castle during the two-month siege by Louis’s army 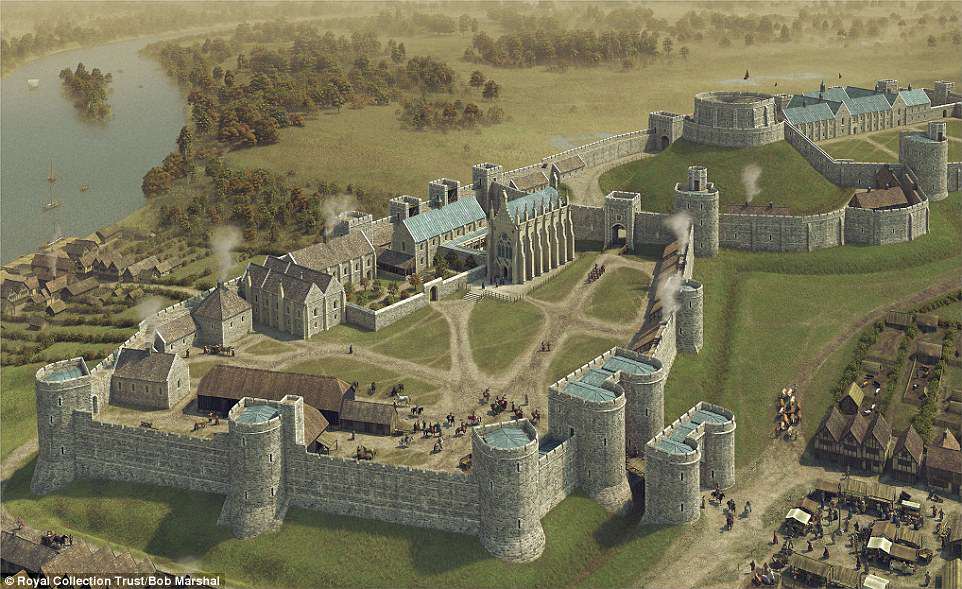 CASTLE DURING THE REIGN OF HENRY III: The reign of Henry III (1216–72) ushered in a richer era in the history of English royal building and court culture. Research has shown that much of the Castle’s 12th- and 13th-century masonry, illustrated in this drawing, survives within the present buildings – with St George’s Chapel inside the walls 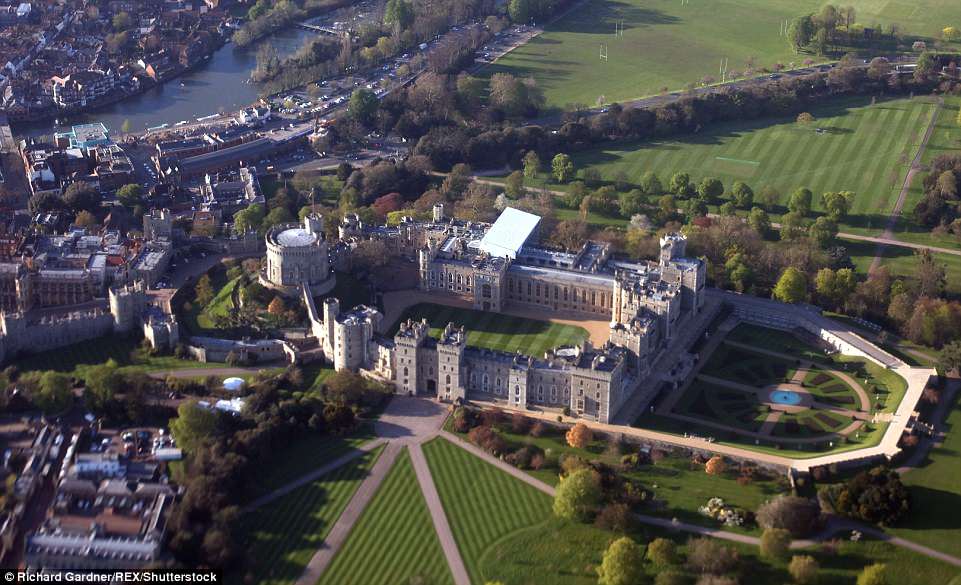 Windsor Castle is the oldest and largest occupied castle in the world, set in 10.5 hectares, and has been home to 39 monarchs 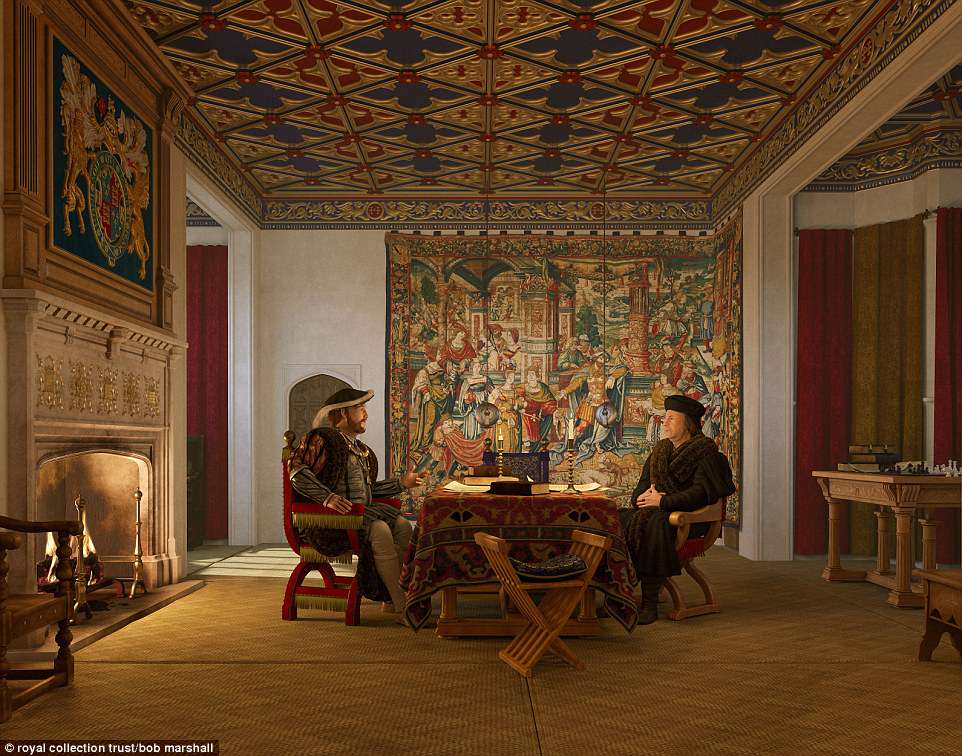 HENRY VIII’S PRIVATE CHAMBER, 1540: Henry VIII (reign, 1509–47) was a frequent visitor to Windsor, enjoying hunting and hawking in the surrounding parks and forest. This artist’s impression of the King’s private chamber in the Henry VII Tower, built during his father’s reign, shows painted and gilded wood and stonework, and richly embroidered tapestries on the walls. The room would have been part of the monarch’s inner sanctum, where Henry met with close advisers such as Thomas Cromwell (who is seen, above, to the right) 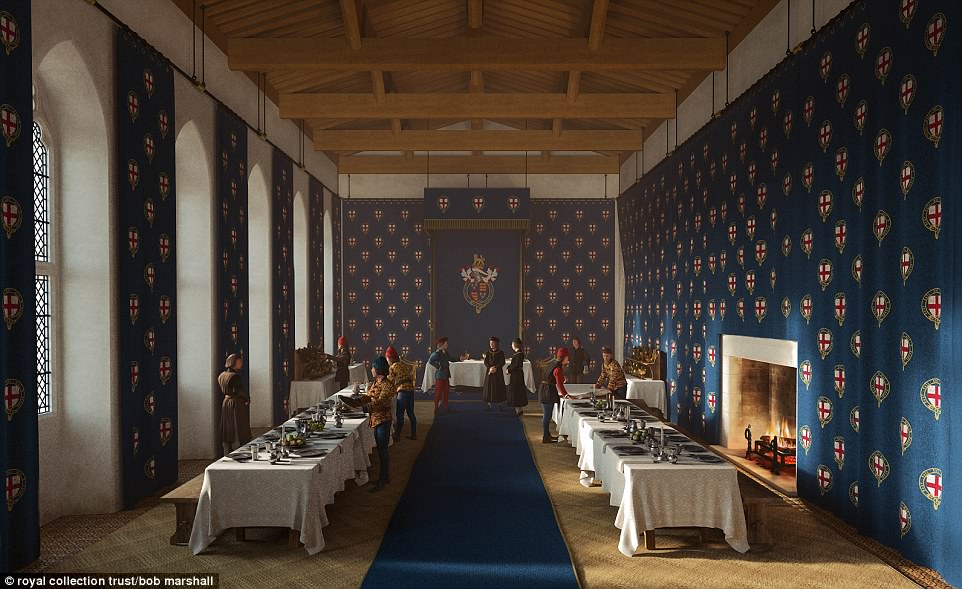 GREAT CHAMBER IN THE REIGN OF EDWARD IV, 1476: In the medieval period, the King’s Great Chamber (today, the location of the Queen’s Audience Chamber and Queen’s Presence Chamber) was central to the life of the castle, and the setting for public audiences and court entertainment. This artist’s impression shows the room being prepared for the Garter feast of April 28, 1476, during the reign of Edward IV (1461–83). The room was probably quite plain, but when the court was in residence it was transformed with rich wall hangings, furniture and gold and silver plate. Here, the wall hangings are decorated with the motif of the Order of the Garter, the oldest and most senior Order of Chivalry in Britain, founded by Edward III at Windsor 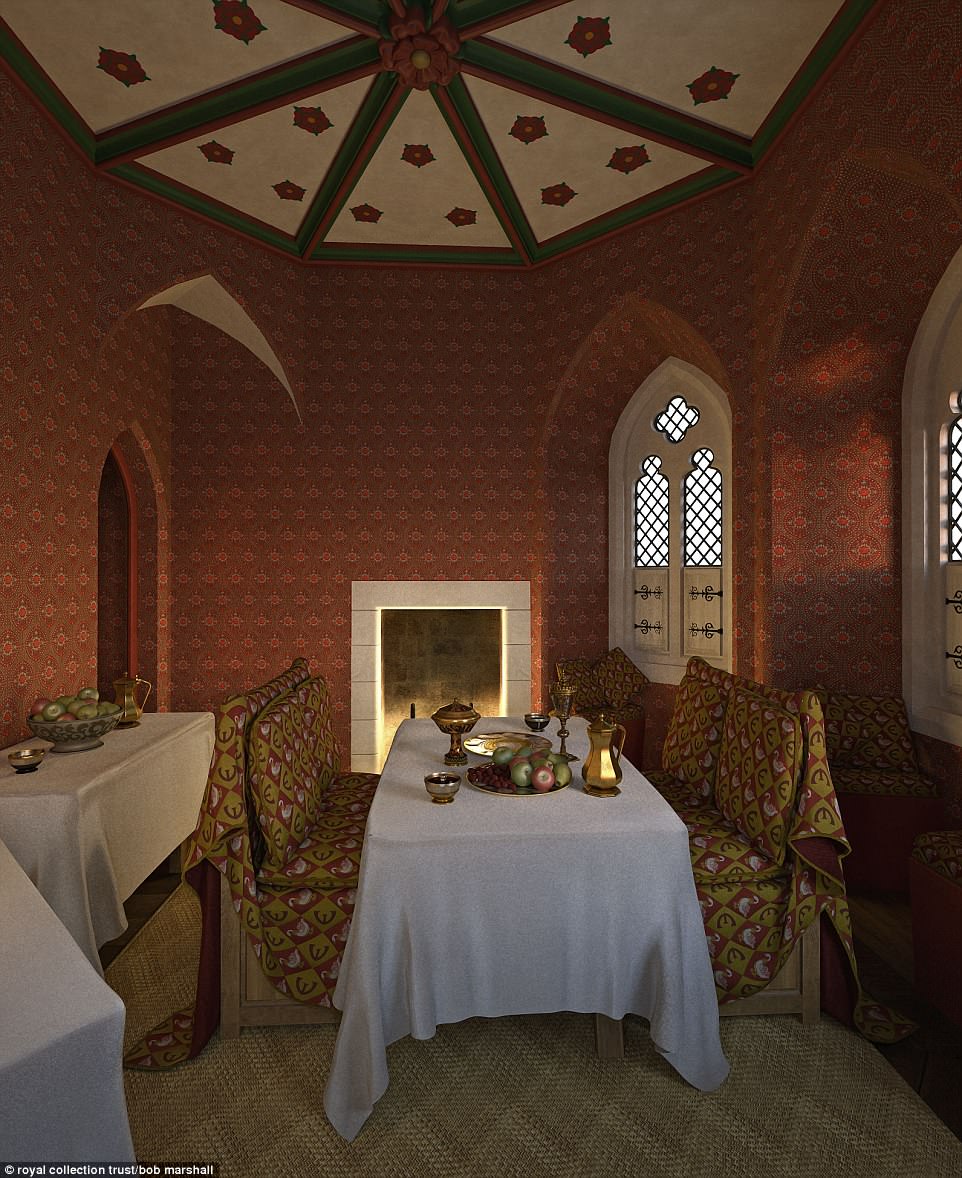 PAINTED CHAMBER IN THE ROSE TOWER, 1366: Edward III (reign, 1327–77) – the ‘warrior’ king – is best known for his lengthy campaigns in France during the Hundred Years War. He spent £50,000 transforming Windsor into a Gothic palace, rebuilding the Castle’s Upper Ward to include square towers and high octagonal stair turrets. This illustration shows the small octagonal ‘Painted Chamber’ of the Rose Tower (today known as King John’s Tower) in Edward III’s day. The colour scheme is based on a surviving fragment of decoration, which suggests that the walls were covered with a pattern of almond-shaped panels containing red, green and gold roses on a red background 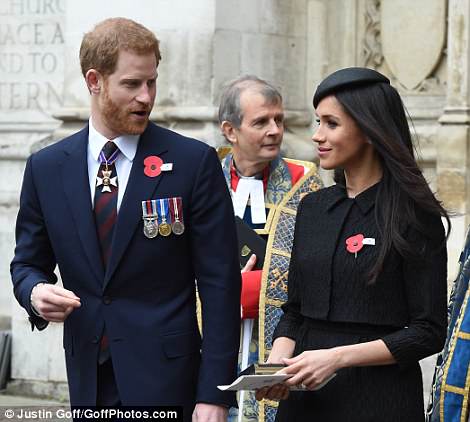 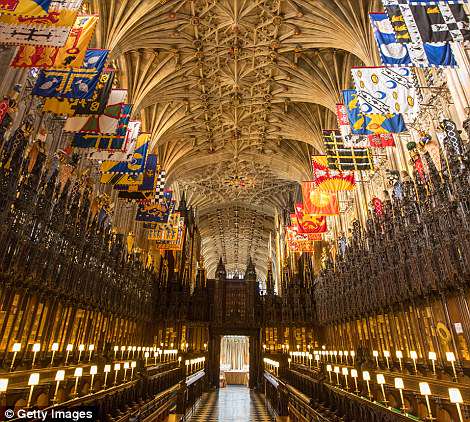 Harry and Meghan (left, earlier this week at Westminster Abbey to commemorate Anzac Day) will marry on May 19 at St George’s Chapel, in the grounds of Windsor Castle in Berkshire 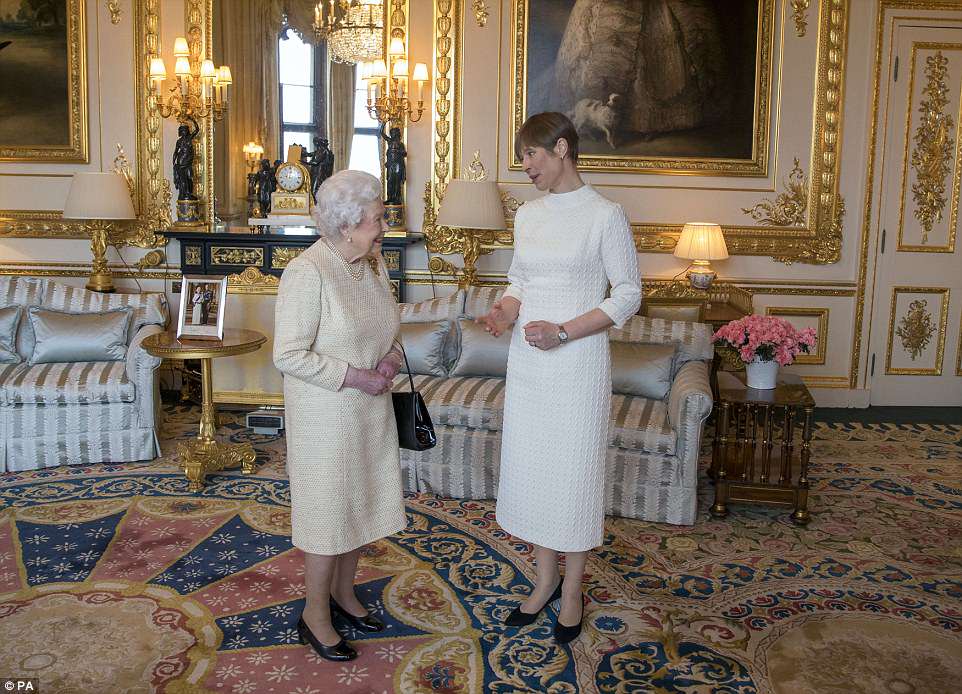 Windsor Castle: A Thousand Years of a Royal Palace is published by the Royal Collection Trust

From Elizabeth I’s long gallery to a travelling circus: Windsor Castle over the years 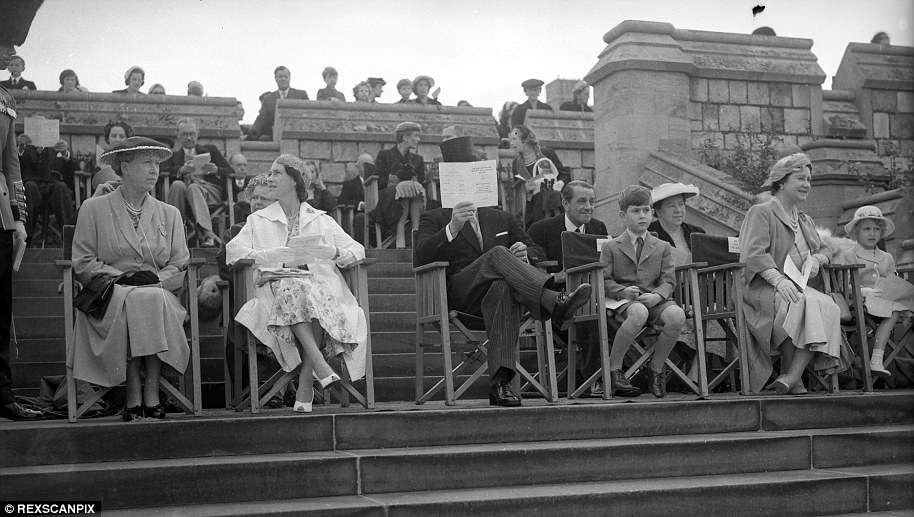 The Queen Mother inspects the 300th Anniversary Parade of the Grenadier Guards at Windsor Castle with Prince Charles, Princess Anne and Princess Margaret in 1956 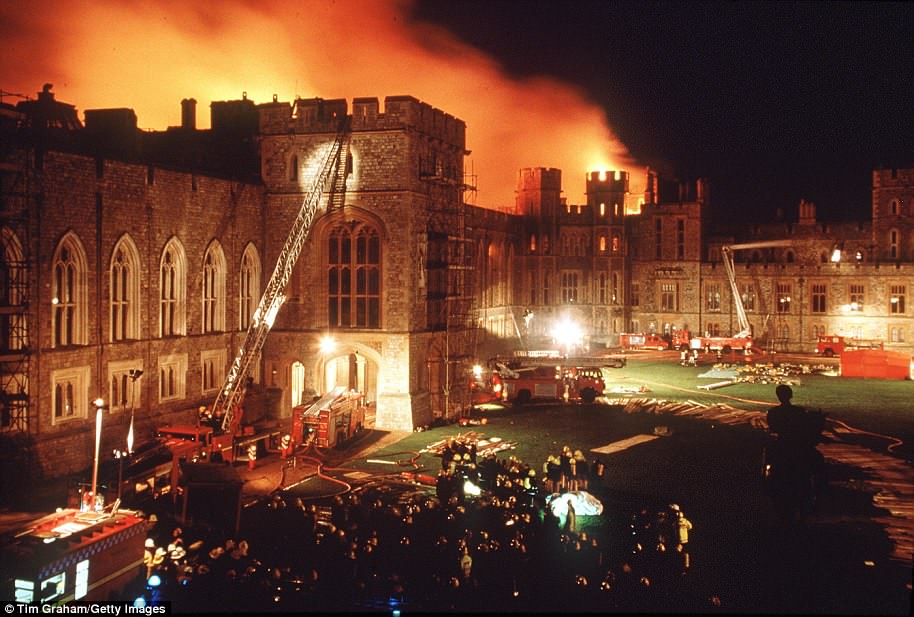 Fire broke out at the castle, damaging more than 100 rooms, in November 1992, in a year described by the Queen as her ‘annus horribilis’