With his eyes bulging and the waxed tips of his moustache quivering like radio antennae, Battery Sergeant Major Bryn ‘Shut Up’ Williams dominates the parade ground.

Windsor Davies, the star of hit Seventies sitcom It Ain’t Half Hot Mum, died last week, aged 88 — but don’t hold your breath waiting for the Beeb to screen any of the classic episodes in celebration of his life.

Though the series ran for seven years on prime-time BBC1, drawing audiences of up to 17 million, the Corporation prefers to pretend it never existed.

Windsor Davies, the star of hit Seventies sitcom It Ain’t Half Hot Mum, died last week — but don’t hold your breath waiting for the Beeb to screen any of the classic episodes

The show, set in the tropics of India and Burma, followed the adventures of a Royal Artillery Concert Party during the Second World War. It was written by Jimmy Perry with David Croft, and was loosely based on Perry’s wartime experiences — as was the pair’s other huge TV success, Dad’s Army, which is still repeated weekly on BBC2.

It Ain’t Half Hot Mum laughed at everything: the corniest gags, class, the Army and the war. But most of all it laughed at the things we are no longer permitted to joke about — especially race and homosexuality.

It was not ‘politically incorrect’: it simply refused to accept that there was anything out-of-bounds when it came to laughter.

Most Britons under 40, born after the show’s heyday (it first aired in 1974), will not understand this. Chattering millennials will never grasp what was so rib-achingly funny about It Ain’t Half Hot Mum.

Today’s comedy is all about saying the right thing, mocking people who think differently — especially in politics. Rigid rules are enforced about what we are allowed to find amusing. To chuckle at a foreign accent or a fey walk would be regarded as a hate crime at New Broadcasting House.

Watch BBC2’s current affairs panel game Mock The Week and you’ll notice its teams are carefully selected to represent a balance of ethnic and sexual diversity, regardless of whether the contestants are actually talented comics. And the one thing they agree on is that the Tories are fair game to have as much ordure heaped on them as possible. 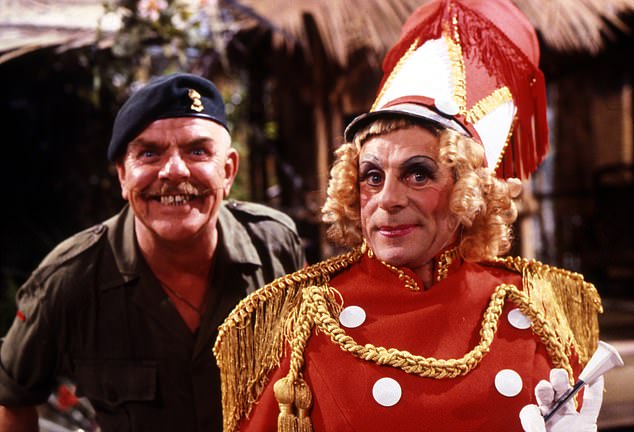 Now compare that with a clip of It Ain’t Half Hot Mum. Ethnic and sexual diversity? It had that, but not in a way which Left-wing humour inspectors deem acceptable today.

Windsor Davies’s sergeant-major was the reluctant babysitter for a troupe of ‘gang show’ minstrels behind the lines in Asia, defending the British Empire against the Japanese. The men were a mixed bunch of entertainers, but uniformly rotten soldiers.

Their one desire was to avoid being sent to the front line. And the sarge’s deepest wish was to see them all under fire, dodging shrapnel and giving the enemy what-for — the one sure way of making real men of them.

There was Gunner ‘Lofty’ Sugden, played by Don Estelle, who stood 4ft 9in in his socks and had the voice of a choirboy. There was university educated ‘Mr Lah-di-Dah’ Gunner Graham (John Clegg), always correcting the sergeant-major’s grammar. 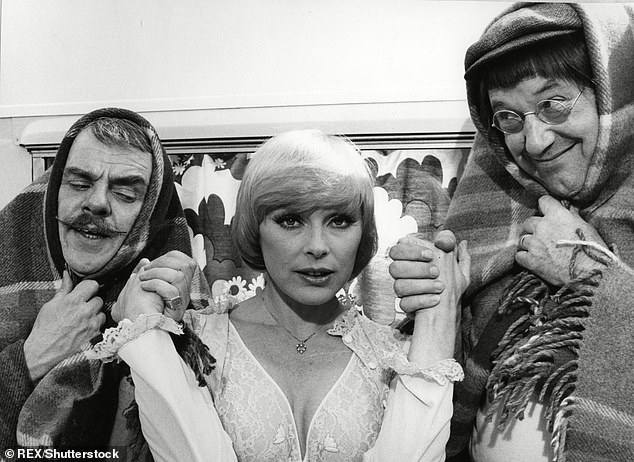 It Ain’t Half Hot Mum laughed at everything: the corniest gags, class, the Army and the war

Most of all there was Bombardier Beaumont, known to all as Gloria, a female impersonator who regarded herself off and onstage as all woman. Gloria, played by the marvellous Melvyn Hayes, was cheerfully accepted by the rest of the gang — except BSM Williams, whose veins started popping at the first sight of her false eyelashes (not to mention her other falsies).

To the throwback sergeant-major, they were all ‘a bunch of ’orrible poofs’ and he told them so, screaming the word in their faces. His leathery lack of feeling was often made clear with faux sympathy: ‘Oh dear. How sad. Never mind.’

Windsor Davies once joked that It Ain’t Half Hot Mum was the ‘saviour’ of his career: ‘It saved me from being a great actor.’ He had Leonard Rossiter to thank for that: the Rising Damp star turned the part down.

Born in Canning Town, East London, in 1930, Davies was brought up in Ogmore, South Wales and worked as a teacher and a miner before enrolling on a drama course aged 31. He was constantly busy with numerous bit-parts in the likes of Z Cars, Dixon Of Dock Green and General Hospital, but comedy was a new departure for him.

It Ain’t Half Hot Mum led to Never The Twain, a sitcom opposite Donald Sinden, in which they played rival antiques dealers. That ran for ten years from 1981.

He will always be remembered, though, as the despotic Royal Artillery sergeant-major, perpetually on the point of explosion.

But if his character imagined he was in charge of the camp, he was sadly mistaken: that power was held by the Indian bearer or odd-job man, Rangi Ram.

Rangi spoke with the most exaggerated accent. Worse still, from a modern perspective, he was played by a white man wearing tan make-up — though the actor Michael Bates was part Indian, spoke Urdu and had been a captain in the Gurkhas.

It Ain’t Half Hot Mum belonged to the era when everything was fair game for laughs. By being affectionate and never cruel, the show was able to send up effeminate theatrical types, and mock the thick-witted homophobia of Windsor Davies’s character at the same time. 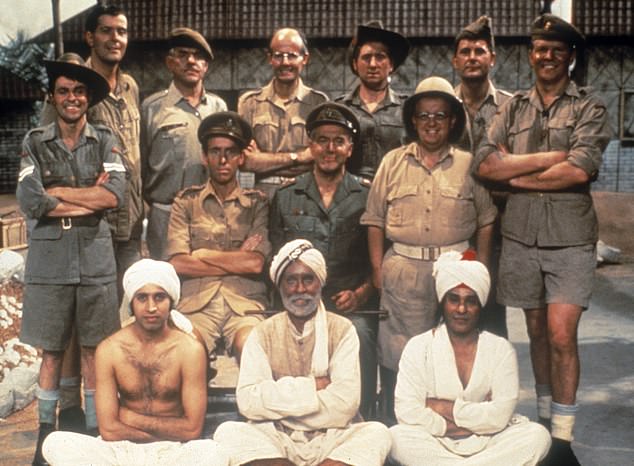 Where are they now? Tributes have poured in following the news Windsor Davies (third left) passed away. His co-stars include Melvyn Hayes (far left) and Michael Bates (front centre). The show was first broadcast in BBC One in 1974 and ran over 56 episodes before ending in 1981 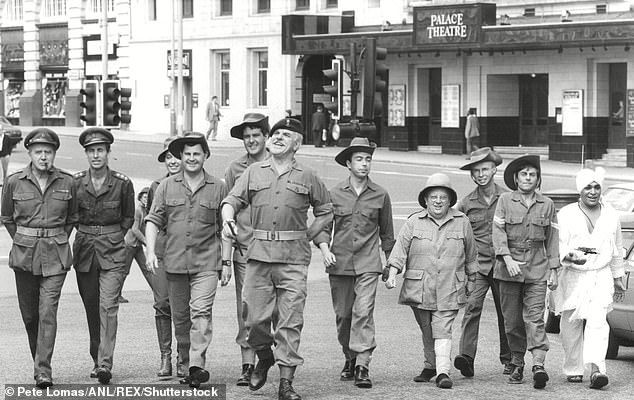 Davies (centre) is pictured on set with co-stars Don Estelle (fourth right), Mervyn Hayes (second right) and George Layton (fifth right). The show was first aired on BBC One in 1974

And the show managed to have its cake and eat it in other ways, too. The Indian characters had more wit and brains than the British officers … but they also sounded silly. The gang shows were dreadful … but they were also really important for the morale of our troops.

This show saw both sides, and that’s precisely what 21st-century Britain can no longer do.

The twin perceptions of homophobia and racism are enough to ensure that It Ain’t Half Hot Mum has not been repeated for many years. It sometimes feels less that Auntie is embarrassed of having made the show (it was ‘of its time’, after all), more that BBC executives are ashamed of viewers who would like to enjoy it again.

It’s no reflection on the quality of It Ain’t Half Hot Mum. Modern po-faced moralising can affect the most popular shows. Even the long-running cartoon The Simpsons, which has long prided itself on satirising anything in range, has been obliged to quietly retire the shopkeeper Apu, apparently because he has a marked Indian accent. Critics accused the character of ‘racist misrepresentation of South Asians’. 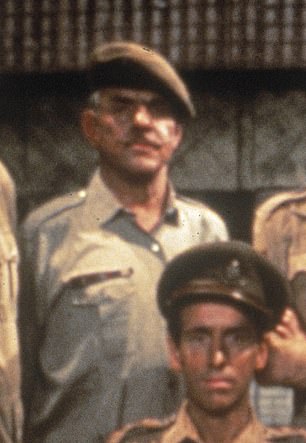 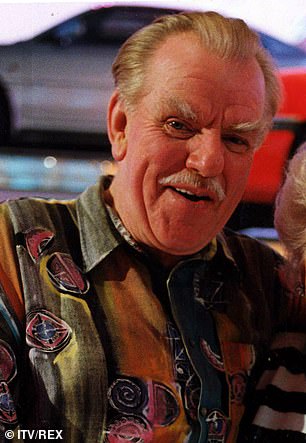 Windsor Davies, who passed away last week, on the set of It Ain’t Half Hot Mum in the early 1980s (left) and in 1994 (right). Tributes to the late London-born actor have poured in 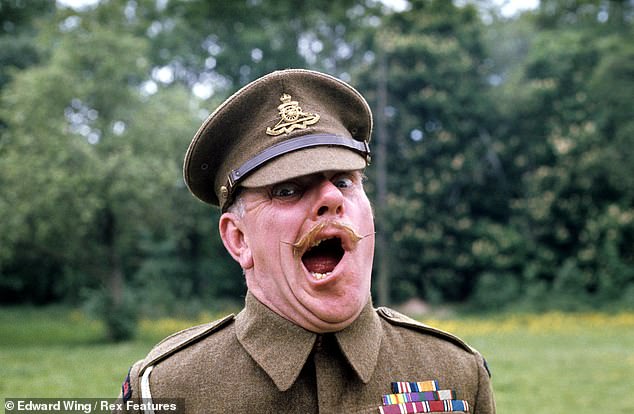 Windsor Davies (pictured on set in 1976) played Sergeant Major Williams in It Ain’t Half Hot Mum, and died last week at the age of 88. The London-born Welsh actor went on to have a number one hit with the novelty track Whispering Grass with his sitcom co-star Don Estelle

And creators of the scabrous cartoon Family Guy said at the weekend they will ‘phase out’ jokes about gays and lesbians.

Such is the nature of the present age that equal opportunities are upheld in everything but comedy.

This attitude would not only be baffling to earlier generations, but downright dangerous. Remember that It Ain’t Half Hot Mum was based on real-life experiences, and that cheesy gang shows were a vital way of keeping up the spirits of troops fighting in desperate conditions in the jungles of Burma.

Future stars including Stanley Baxter and Kenneth Williams learned their craft from Rangoon to Singapore, high-kicking for loud, lairy combat units who laughed themselves sick.

Try telling an artillery gunner in a malarial swamp that he shouldn’t laugh at a comic with shoe polish on his face, sending up the native accents. His attitude would be, ‘What are you going to do, shoot me? The enemy are already trying to do that.’

Today, comedy is not about survival any more, so it has become a way of signalling social membership and political virtue.

But every time a pious luvvie protests that we mustn’t joke about something, Sergeant-Major Williams’s voice echoes back across the parade ground…