A Winston Churchill-inspired cafe that has become a target for activists has been stormed by a group of Left-wing protesters.

Nine demonstrators burst into the Blighty UK Cafe in North London on Saturday and told customers to boycott the place for ‘celebrating colonialism’. They also denounced Britain’s wartime leader as a ‘racist’

The patriotic cafe, in Finsbury Park, features a life-size Churchill figure, Union Flags and model Spitfires. But a small group of young men and women stormed the diner and disrupted staff and customers.

A video shows the group chanting ‘Churchill was racist’ and reading from scripts as stunned customers looked on.

One of the protesters says: ‘We cannot accept the unashamed colonial and gentrifying presence of this cafe. You will never make colonialism palatable.’

She demands the owners ‘apologise to the local community for their poorly thought out and insensitive branding and promptly change it’.

The whole group also chants ‘It is our duty to fight for our freedom’ and ‘we have nothing to lose but our chains’.

When one diner says ‘Churchill fought for our freedom’, a protestor replies ‘Churchill was a racist’. The incident is the latest in a string of attacks on the cafe.

Last week it emerged that owners were facing calls to ‘adjust their brand’ from locals who had taken offence to the décor.

Protesters even started an online petition which claims the cafe, and its sister branch, are ‘using history in a light-hearted fancy dress manner’.

Owner Chris Evans has also been forced to remove a Churchill mural after it was repeatedly vandalised with the words ‘scum’, ‘warmonger’ and ‘imperialist’.

In a previous interview he defended his cafes’ themes and said that the vandalism of the Churchill mural and petition against his flourishing chain had been an ‘unnecessary headache’. 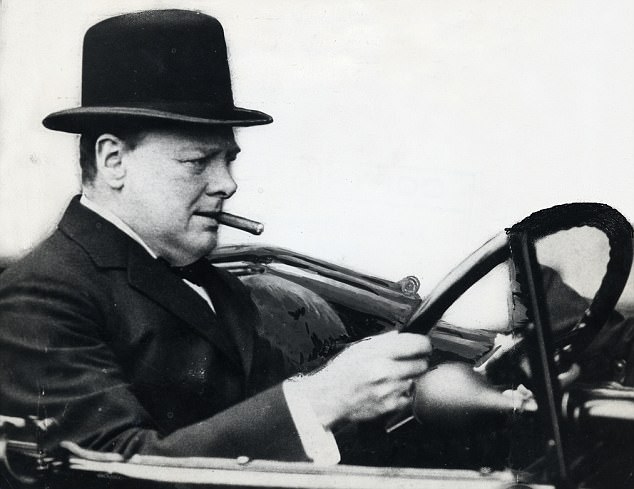 When one diner says ‘Churchill fought for our freedom’, a protestor replies ‘Churchill was a racist’. The wartime leader is seen leaving Downing Street in an undated image

He said: ‘We never imagined that Churchill or Gandhi would attract complaints. We thought they were both widely-liked and admired figures.

‘After all, Darkest Hour cinema audiences are currently giving standing ovations to Churchill’s “We shall fight on the beaches” speech.

‘The Churchill mural was just a bit of fun with the idea that he had two fingers up ordering a double espresso.

‘But, sadly, we had to get rid of it some months back after it was repeatedly vandalised. We now have people running petitions against us.

‘It is simply silly to say we are celebrating British imperialism and colonialism.

‘We are just an independent cafe chain put together by people who work hard to make it happen and yet people seem to want to bring politics into it to try and drag us down.

‘All we are doing is celebrating a true British hero in Churchill and the ties between Britain and Commonwealth countries through the mediums of coffee and food.’