Counting in Wisconsin has gone right down to the wire with Joe Biden clinging on to a wafer-thin lead over President Trump.

With 95 per cent of ballots tallied and only 10,000 votes – 0.3 per cent – separating the candidates, the world is watching which way the state will finally break.

It is likely to declare this morning after stumbling over a delay with counting mail-in ballots in one city when the printers ran out of ink.

If the state flips blue Biden has a clear path to the White House and only has to win two other battleground states to triumph.

A victory in Wisconsin would pitch the Democratic candidate at 248, meaning he would only need 22 more electoral college votes to surge past 270.

But the state’s clinical status means Trump will almost certainly pay for a recount, which is allowed under state law if the margin of defeat is less than 1 per cent. 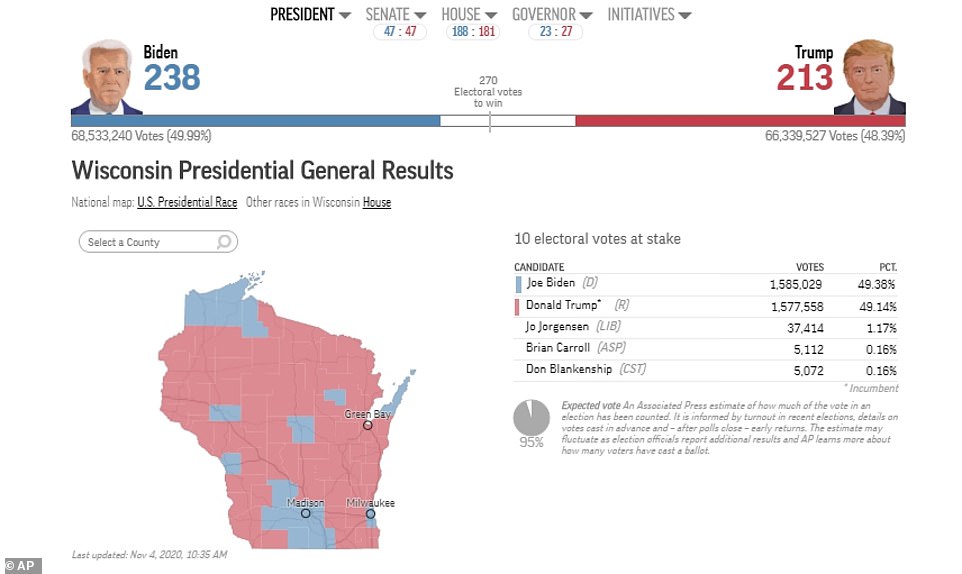 Trump is showing well in the rural areas while Biden has mopped up votes in cities such as Madison, a trend replicated across the country.

Only 51 per cent of votes have been counted in Brown County, where Trump is ahead by 15 points, which if extrapolated could see him edge the state.

Counting in the county’s city of Green Bay was delayed because the electronic machines reportedly ran out of ink and the clerk had to fetch more.

Green Bay’s absentee votes have now been counted and are en route to the Brown County clerk who will announce them imminently.

The ballots further widened the gap between Biden and Trump, who had been leading the state up until around 4.30am EST when Milwaukee county broke for his Democratic challenger.

Election staff are grappling with a crush of mail-in ballots, which have been strongly skewed in Biden’s favour.

The other states still in play are Michigan, Pennsylvania, Georgia, North Carolina and Nevada.

North Carolina, Georgia, Pennsylvania and Michigan are all leaning towards Trump, however the Biden campaign will hope many of the remaining votes will be mail-in ballots. 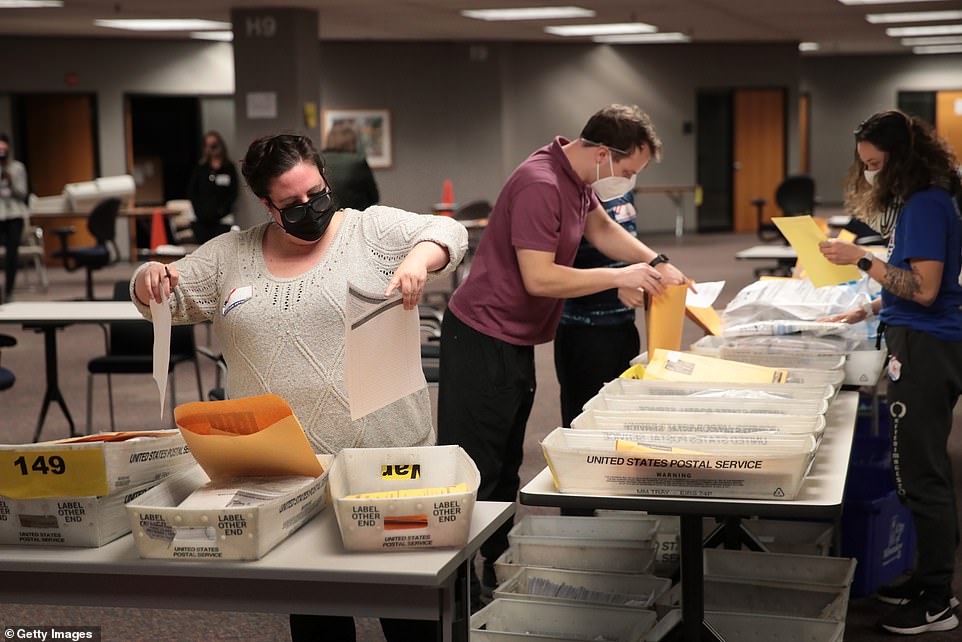 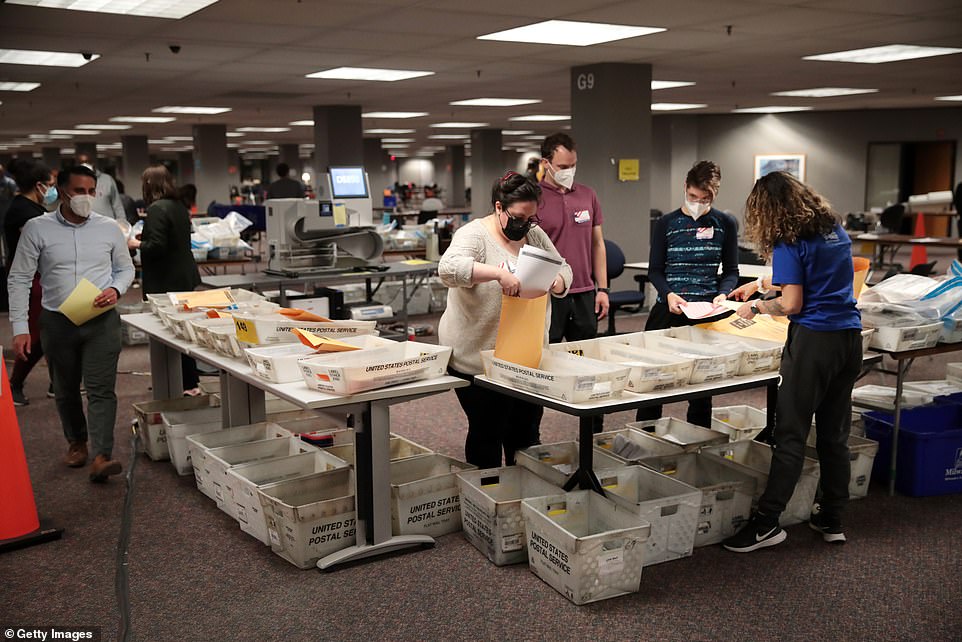 With 95 per cent of ballots tallied and only 8,000 votes separating the candidates, the world is watching which way the state will finally break

By Emily Goodin, Geoff Earle and Nikki Schwab for DailyMail.com

Donald Trump and Joe Biden have plausible paths to claiming victory in the White House race on Wednesday without going to court.

But they depend on a series of factors falling into place.

As of 5 am Joe Biden was on 238 Electoral College votes and Donald Trump on 213.

Undecided were Nevada – widely expected to break for Biden – and Alaska, seen as safely in Trump’s column.

But undecided are Georgia (16 votes), North Carolina (15), Wisconsin (10), Michigan (16), a single vote from Maine’s undeclared Congressional district and the big prize of Pennsylvania with 20 votes.

Numerically, Biden has the easier path: he needs 26 votes to get to 270, while Trump needs 58.

That means he could eke out a win on Wednesday – but only if results come in his favor.

Trump’s path on Wednesday seems less likely, because he needs to get more states into his column.

And the one clear fact is that Pennsylvania’s count will not be over until Friday, which means that every attempt to settle it before then is fraught for both men. 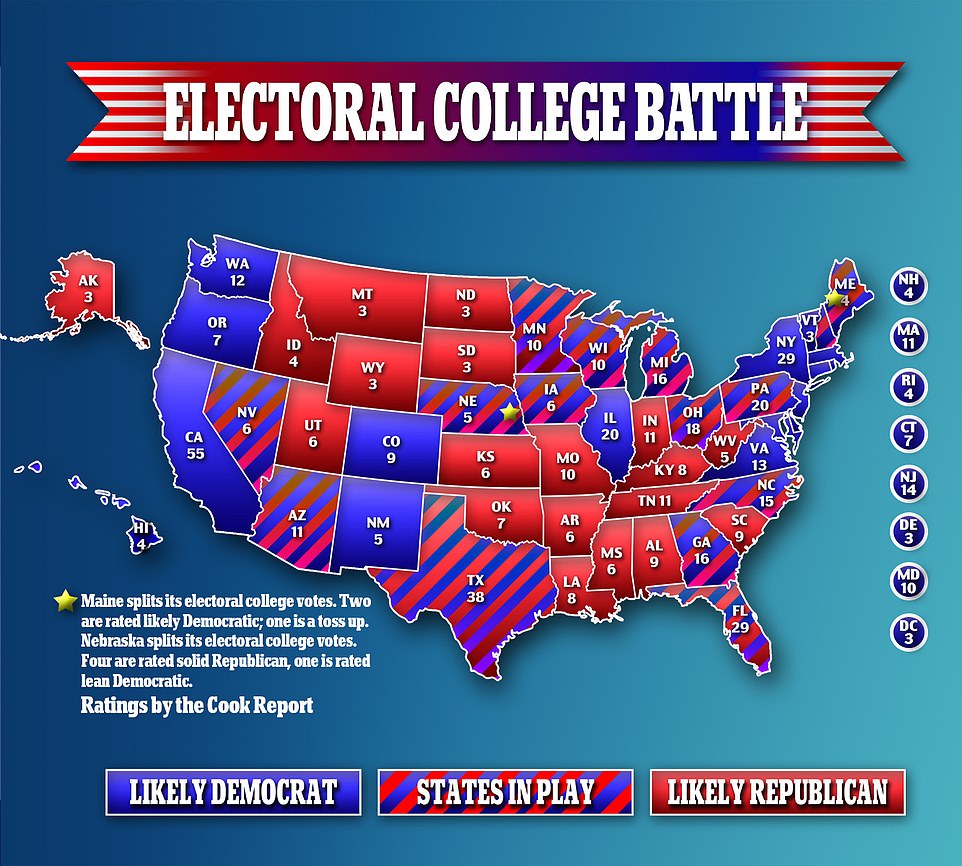 SCENARIO ONE: MICHIGAN AND WISCONSIN GO FOR BIDEN

This is the ending to the election which involves the fewest states and could break most rapidly.

Combined the two mid-western states have 26 votes. That would put Joe Biden on the vital 270 figure.

Wisconsin’s results could come as early as 9am Wednesday.

Michigan’s results are less clear but the Secretary of State said Tuesday that she hopes to provide ‘a very clear picture, if not a final picture’ by Wednesday night.

Currently almost 20% of votes are still to be counted and they are mail-in ballots, which are expected to favor Biden.

Detroit, the state’s biggest city and a hub of Democratic voters, won’t have its results known until sometime Wednesday as it experiences record levels of turnout, a good sign for Biden.

Turnout in Motor City, where Biden campaigned with Barack Obama on Friday, is expected to hit 55 per cent – that’s up seven points over the 48 per cent who voted in 2016.

‘We’re on track to be in a position to potentially see a full result of every tabulation in the next 24 hours,’ she announced.

Trump won the state by taking the suburbs – the Macomb and Monroe counties outside of Detroit – but he also won working-class areas in like Michigan’s Upper Peninsula, which has many white working-class voters.

Biden has concentrated on winning African American voters in the state in urban areas like Flint.

If that tactic eventually pays off there could be a victory for Biden declared rapidly – on Wednesday night.

But the state governor Gretchen Whitmer has also warned that results could take days more. 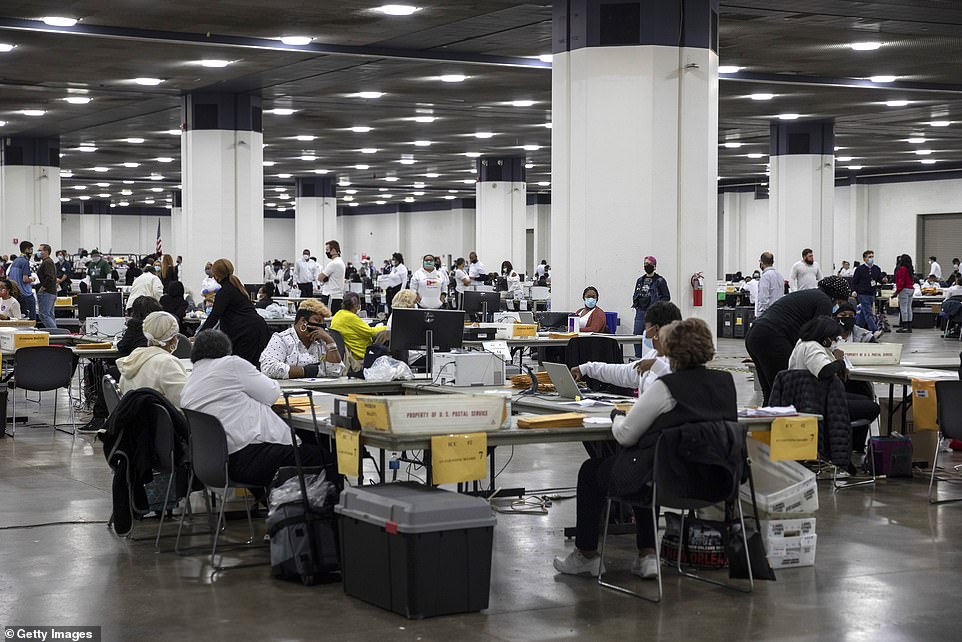 This scenario sees Trump gain the upper hand in the south.

If the southern states reports clear results on Wednesday and go for Trump, he would climb to 247, putting him in touching distance of 270 – if he can gain Michigan.

Gaining Wisconsin alone is pointless in this scenario. Its 10 votes only take him to 257.

However Michigan’s would put him on 273 – a victory.

Georgia Secretary of State has said he expected Georgia to have all its results on Wednesday.

Trump was narrowly ahead of Biden by 5am but with a substantial number of votes still to be counted from Atlanta where poll workers went home to rest.

On its own that seems to make the scenario unlikely for Biden.

But mail-in ballots postmarked by Tuesday will be accepted until November 12.

This appears the least likely scenario given that North Carolina is trending slightly towards Trump.

But if Joe Biden takes Georgia and North Carolina, that would get him a total of 31 votes. That puts him on 275. 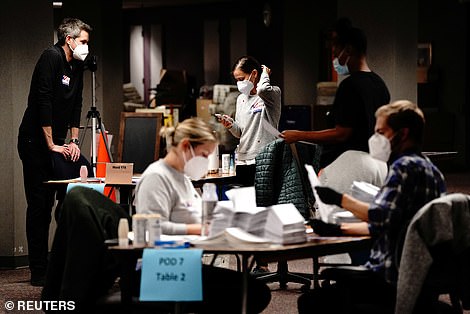 Georgia Secretary of State has said he expected Georgia to have all its results on Wednesday.

Trump was narrowly ahead of Biden by 5am but with a substantial number of votes still to be counted from Atlanta where poll workers went home to rest.

On its own that seems to make the scenario unlikely for Biden.

But mail-in ballots postmarked by Tuesday will be accepted until November 12.

If mail-in ballots skew Democratic, that may make it impossible to know the outcome before November 12 even if it is in Biden’s favor.

If Trump takes Georgia and North Carolina, he moves up to 247.

That puts him in touching distance if he can also win Michigan, whose 16 votes take him to 273.

If Trump takes all four of the states on the table without touching Pennsylvania, it is game over for Biden.

SCENARIO FIVE: IT’S ALL ABOUT PENNSYLVANIA SO THERE WILL BE NO RESULT ON WEDNESDAY

But its 20 electoral college votes would offer a clear path to victory for whoever gets them.

If Biden takes the 20, he needs to pick up any one of the other states to get over 270.

For Trump the path is trickier but Pennsylvania would undoubtedly help.

With 226 votes secured, he could then win with the two southern states and Michigan – leaving Wisconsin untouched.

But Pennsylvania is the most challenging state for both parties because of the huge uncertainties which surround its votes.

Compounding the problem are lawsuits expected over disputed ballots, which could drag out the results of the election even longer. Republicans have made it clear they will sue when and where they see necessary.

In Pennsylvania, state law forbids officials from counting mail-in ballots until Election Day. Additionally, the Supreme Court allowed the state to count ballots for three days after Nov. 3 so long as they are postmarked by Election Day.

Only 25 per cent of the early votes have been counted.

In Philadelphia officials said around 350,000 votes were cast, but only 76,000 were tallied during the day Tuesday. The rest won’t be counted until Wednesday.

‘The counties are working really hard to get [the results] in as soon as possible,’ Pennsylvania Secretary of State Kathy Boockvar said Tuesday. ‘It’s going to take time.’

Biden’s biggest strongholds in the Keystone State are in Philadelphia and then Pittsburgh – where he and VP nominee Kamala Harris held rallies with Lady Gaga and John Legend Monday night.

Philadelphia in particular is a Democratic stronghold with more than 1.1 million registered voters, which is more than 10 per cent of all the voters in the state.

But Trump has campaigned heavily in the state – he held four rallies there on Saturday alone – and wants to repeat his stunning 2016 win there.

Election workers in Luzerne County, a northeastern county near Scranton, stopped counting mail-in ballots on Tuesday evening and will resume Wednesday, according to county manager David Pedri. He said the county had counted about 26,000 mail-in ballots of the about 60,000 cast. 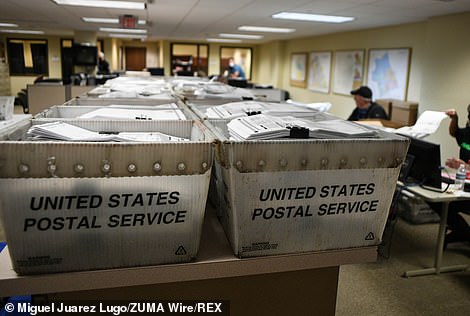 Pennsylvania Gov. Tom Wolf, a Democrat, on Tuesday called on residents to remain calm and patient as they await results.

In a brief one-and-a-half-minute video, he urged Pennsylvanians to ‘take a breath.’

‘Across the state, dedicated county workers are ready to tirelessly make sure everyone’s vote counts,’ the Pennsylvania governor said. ‘But counting that tremendous number of ballots will take more time than we are used to.’

‘We may not know the results today,’ he acknowledged, ‘but I encourage all of us to take a deep breath and be patient.’

‘What is most important is that we have accurate results – even if that takes a little longer,’ Wolf added.

Pennsylvania saw about 2.5 million of its 9 million registered voters request absentee ballots. As of Tuesday morning, 81 per cent of them had been returned.

Any ballot post marked by Election Day and received by November 6 will be counted.