Bubbly newscaster Neena Pacholke killed herself with a handgun just 90 minutes after making the purchase from a Wisconsin weapons store, DailyMail.com has exclusively learned.

The tragic end to her life came after her fiancé Kyle Haase broke up with her just seven weeks before they were due to marry.

The split came after a tumultuous two-year romance filled with fights, heavy drinking and rumors of affairs.

Neena even told one friend she returned to the house she shared with fiancé Kyle and found an unfamiliar pair of panties, friends say.

Pacholke was found dead last month in the $390,000 home she and Haase had just bought in Wausau, Wisconsin.

DailyMail.com have now obtained the full police report which details the efforts police and family members went to, in the hours before she took her own life.

A worried friend had even called 911 and asked police to do a welfare check, but by the time they got there, Neena was already gone.

Neena Pacholke, 27, was honored earlier this month in a celebration of life service at a local church in the Wausau, Wisconsin area 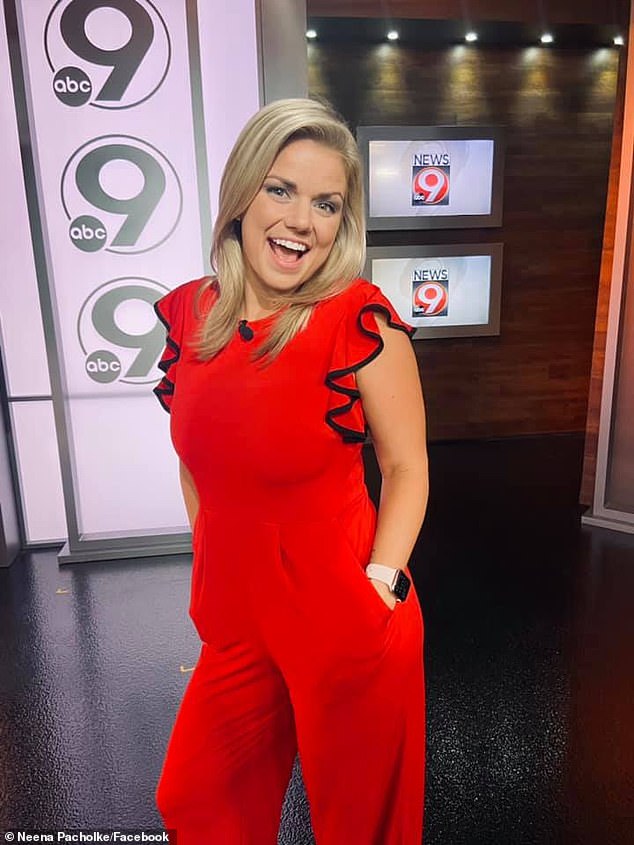 Pacholke, who was the morning news anchor of local ABC affiliate WAOW-9 in Wisconsin, took her own life after her fiancé Kyle Haase ended their engagement, weeks before their wedding

The report details how several officers went round to Neena Pacholke’s home on the morning on August 27 after she had made a number of suicidal comments in text messages.

The day before, a friend had removed all firearms from the home for fear of Neena’s precarious mental state.

Fiancé Kyle was on his way to Minnesota to see his mother along with his children but spoke to Neena who told him that she was ‘going to do something’, however she was not specific.

Kyle then contacted the police asking them to make a welfare check on Neena’s home. He advised them of the code for the garage in order that the police might be able to gain access to the interior of the home. 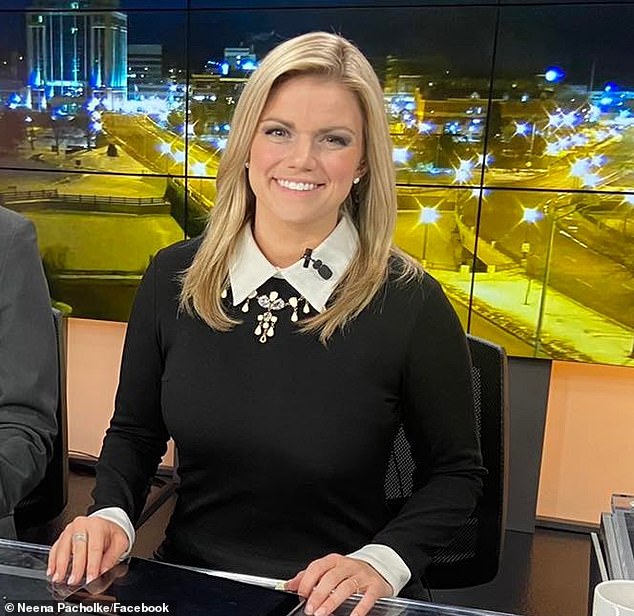 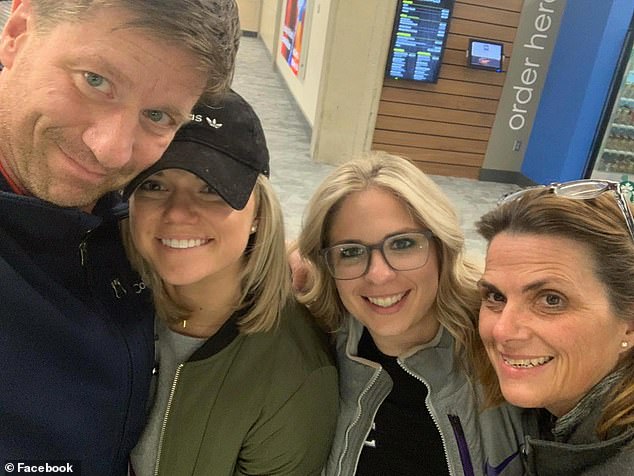 When police went home at 11:20am there was no response from inside.

Officers walked around the perimeter of the home and peered through the windows but could not see if anyone was present.

Suddenly they heard a noise and clattering as if something had fallen.

Police waited for around half an hour and they considered ways to get inside the home before finally forcing a door open.

Officers went into a bedroom where the smell of gunpowder lingered in the air.

They found Neena in a closet leaning against the wall with a firearm laying next to her right hand on the ground.

There was also a mark in the wall where the bullet had passed through her skull into the drywall. 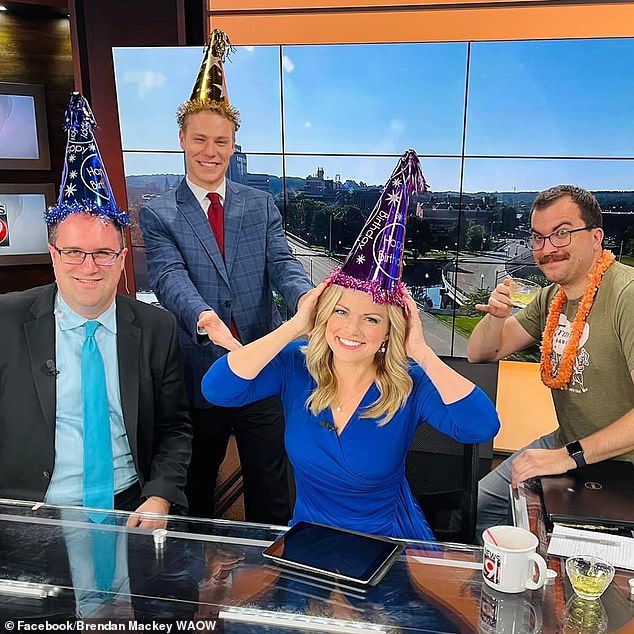 A receipt on the bedroom dresser showed Neena had purchased the gun earlier that morning – about 90 minutes before she killed herself. Neena is pictured with her co-hosts 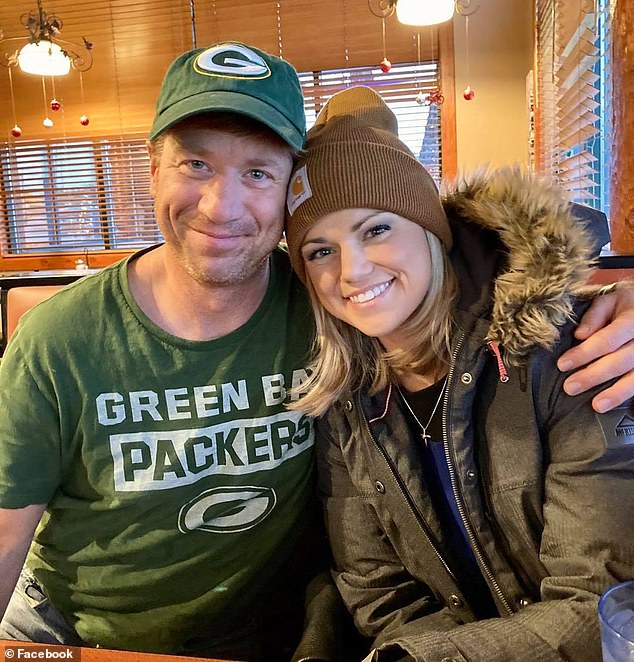 Neena Pacholke is pictured together with her father, Aaron. He was on a cruise at the time of her death

On the dresser in the bedroom was a receipt from Zingers and Flingers firearm store where Neena had bough a 9mm handgun at 10am that morning, just 90 minutes earlier, together with a box of ammunition for $840.

The ammunition box had been left open on the dresser with three rounds missing from the box.

Neena’s phone had also been plugged in to charge on the dresser.

The night before her death, she had made a number of searches on Google on how to end her life.

She also revealed in text messages to her sister that she was ‘broken’ and ‘needed someone to talk to.’

‘He [Kyle] told me he hates me and will feel like a million bucks once I am out of his life,’ she revealed to her sister in a heartbreaking text

In the minutes before the shooting, Neena sent a desperate message to Kyle. It was to be her final communication.

‘I love you Kyle. I always have and always will. Despite how much you ruined me, I always had hope. I’m so sorry to do this to you but I can’t handle any of this pain anymore.’

Kyle, who was driving with his children at the time of the message responded: ‘The police are there’ adding one minute later, ‘If you don’t answer they are going to open the door on their own.’

But it was too late. 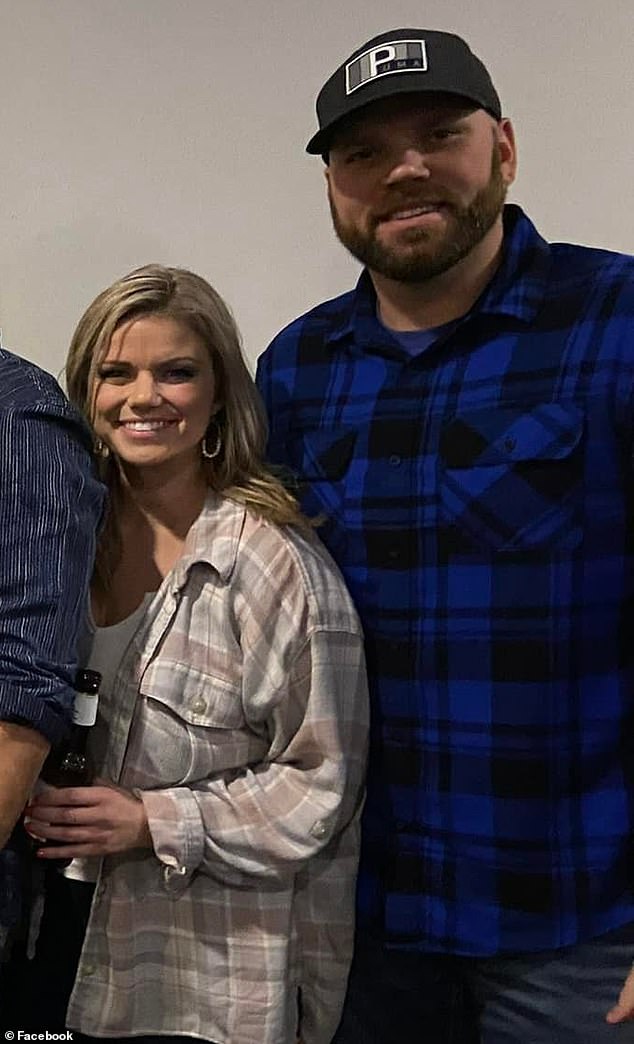 DailyMail.com can reveal Pacholke and Haase’s split came after a tumultuous two-year romance filled with fights, heavy drinking and rumors of affairs 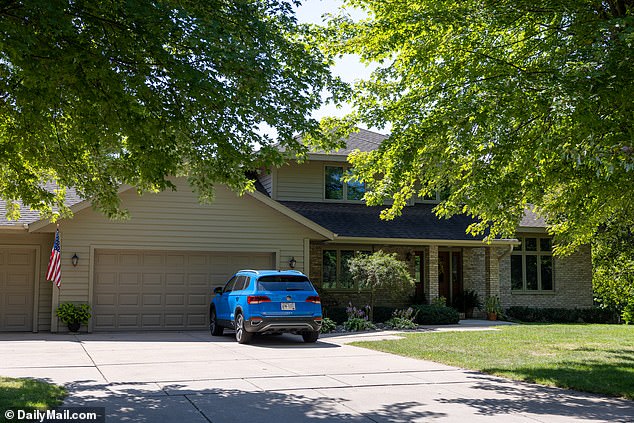 Pacholke was found dead last month in the $390,000 home she and Haase had just bought in Wausau, Wisconsin in July

Pacholke, 27, and Haase, 38, had closed on their house on July 27 – exactly one month before she took her own life there.

Pacholke’s friends say she always appeared more invested in her relationship with the father-of-two than he was.

‘They were always arguing, and it seemed like Neena was more in love with Kyle that he was with her,’ one friend told DailyMail.com.

Neena had also become suspicious that Kyle, who worked as a commercial sales manager at Imperial Industries may have hooked up with a former lover.

One friend said that just a few weeks ago Kyle showed a friend a nude picture that a former mistress had sent him, and he told the friend, ‘Look at her boobs and a**, I wish Neena’s body looked like that. 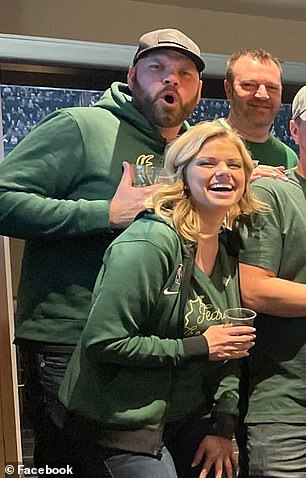 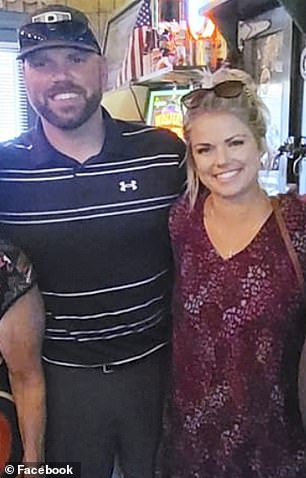 Neena Pacholke and Kyle Haase met at a funeral in 2020 when he was still married. He got divorced last year 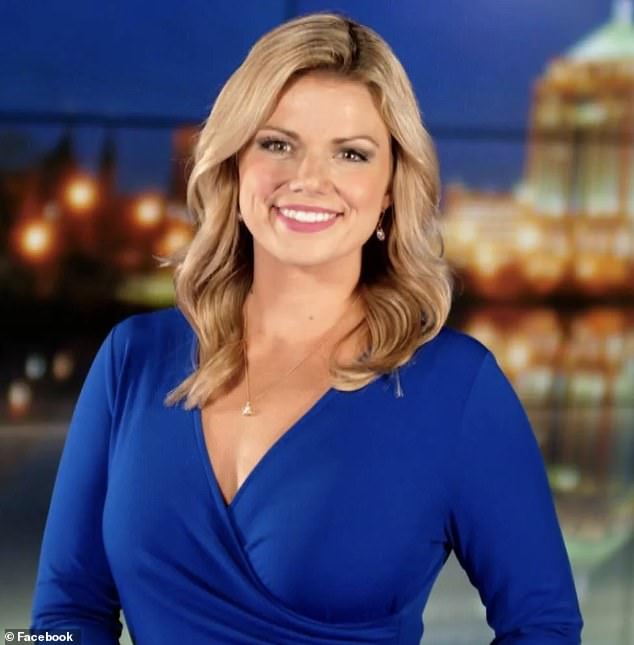 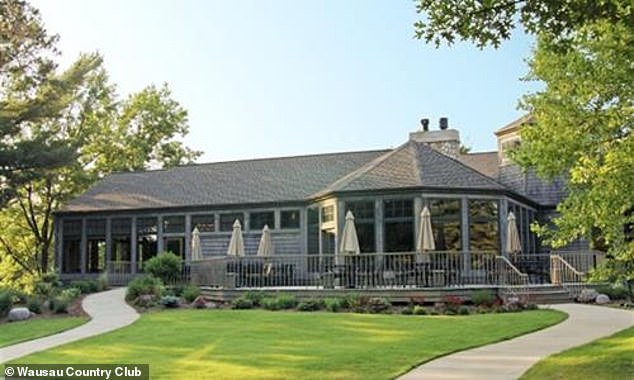 In July, police were called to a breast cancer awareness fundraiser that the couple were attending at the Wausau Country Club, after Haase got drunk and belligerent 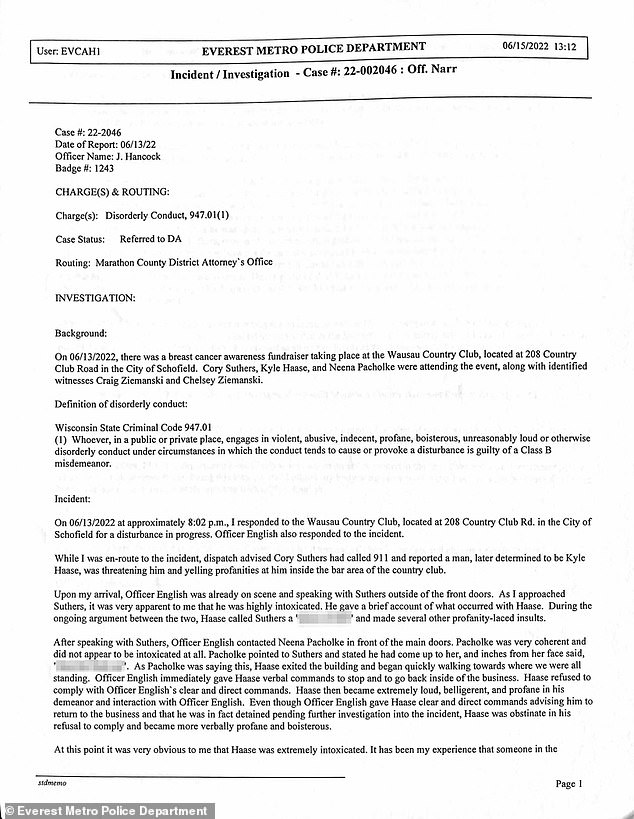 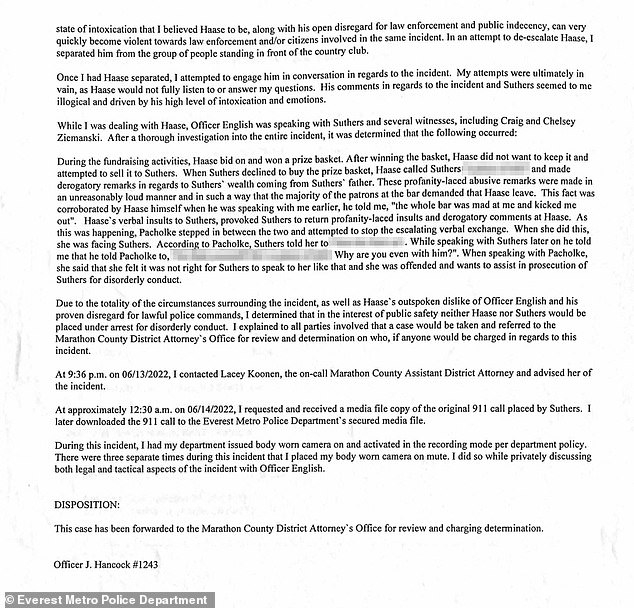 The couple had been due to marry on October 12 at the tony Barcelo Maya Palace all-inclusive resort in Playa Del Carmen, Mexico where rooms start at $550 night.

The couple, who met at a funeral in November 2020 when he was still married, had originally planned a large wedding in Wausau for next summer, but decided to bring the date forward. He popped the question on May 9.

Pacholke decided to give up her apartment in downtown Wausau and move into Haase’s rental house earlier this year.

But they had a big fight in early July, DailyMail.com has learned, and he told her he was kicking her out.

She rented a U-Haul truck on July 8 and moved all her belongings to a friend’s house. She stayed at a local hotel for three days before they reconciled.

Pacholke, who grew up in Tampa and was a star basketball player at the University of South Florida, was a popular figure in her adopted hometown.

But her fiancé is not so admired. ‘I never liked him,’ one friend told DailyMail.com.

‘He was always the drunkest one at the bar,’ said another. He made good money and wasn’t afraid to let everyone know it.’

Police were called in July to a breast cancer awareness fundraiser that the couple were attending at the Wausau Country Club, after Haase got drunk and belligerent.

He had won a basket as a prize but didn’t want it and tried to sell it to country club stockholder Corey Suthers.

When Suthers said no, Haase called him a ‘piece of s**t.’

‘He wanted his $2,000 back that he’d spent on a charity basket and when he didn’t get it, he started to throw out profanity and insults to me and everyone else inside the club,’ Suthers told DailyMail.com.

According to the police report of the incident Haase ‘made derogatory remarks’ about Suthers’s wealth coming from his father.

Neena and her fiancé, Kyle, were due to be married in just six weeks and had a registry available online 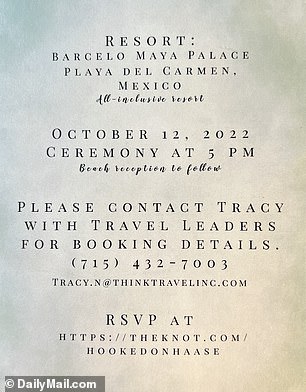 The two originally planned a large wedding in Wausau for next summer, but decided to bring the date forward. Haase popped the question on May 9 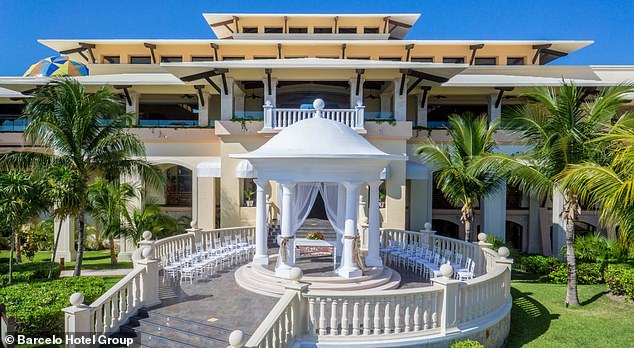 The couple had been due to marry on October 12 at the tony Barcelo Maya Palace all-inclusive resort in Playa Del Carmen, Mexico where rooms start at $550 night

‘These profanity-laden abusive remarks were made in an unreasonably loud manner and in such a way that the majority of the patrons at the bar demanded that Haase leave,’ wrote Officer Jeff Hancock.

‘As this was happening, Pacholke stepped in between the two and attempted to stop the escalating verbal exchange. According to Pacholke, Suthers told her to ‘shut the f**k up.

‘While speaking with Suthers later on, he told me that he told Pacholke to ‘go f**k yourself. He’s a piece of s**t. Why are you even with him?’

Hancock, who went to the fundraiser with Officer Joshua English added: Due to the totality of the circumstances surrounding the incident, as well as Haase’s outspoken dislike of Officer English and his proven disregard for lawful police commands, I determined that in the interests of public safety, neither Haase nor Suthers would be placed under arrest for disorderly conduct.’

Instead, he told them he would be referring the case to the district attorney’s office.

Friends are devastated that Neena Pacholke took her own life, ‘She always had great smile on her face. But for her to commit suicide there must have been some life altering moment in her mind to take her own life,’ one said.

Sadly, just weeks before Neena killed herself, while she was anchoring the news there was a story about suicide. During the break she was overheard telling her co- anchor, ‘I just don’t understand how can anyone commit suicide? It’s such a selfish act. The person doesn’t realize how it affects everyone in their life.’ 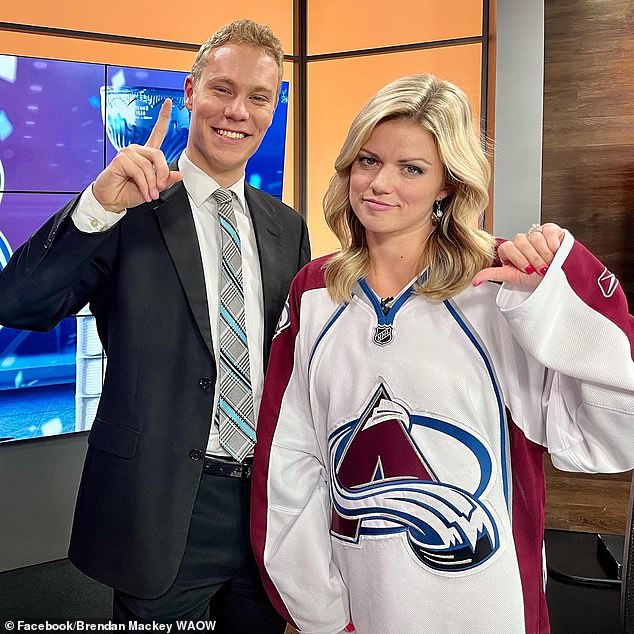 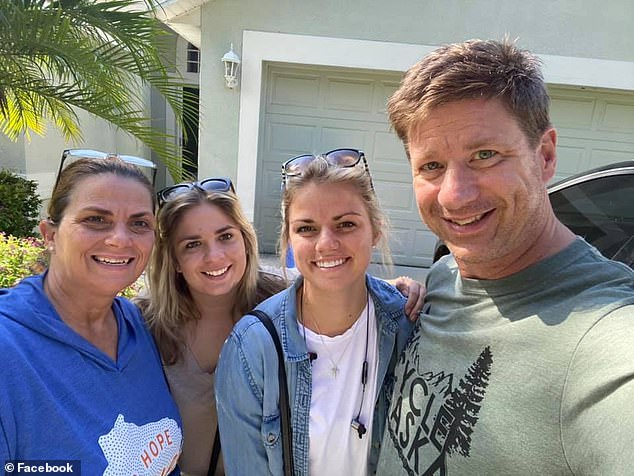 Neena is pictured with her father Aaron, mother Laurie and sister Kaitlynn in November last year. She had texted her sister in her final hours

Haase told a friend that Neena left him a message and an email saying that she loves him and was just hurting so bad she had to leave. Neena told him that she was sorry to do this to him, but the hurt was so much.

Neena’s parents gave an interview to WAOW-9, the ABC affiliate where she hosted the morning show Wake Up Wisconsin.

They confirmed she had suffered from mental health issues for years. Neena’s mother, Laurie Pacholke said, ‘She was getting treatment. I’ll put it out there – she had been to the crisis center a couple of times.

‘She had so many people here to talk to. She talked to people, but she didn’t want anybody to know how she was hurting so she didn’t talk until it got so bad.’

If you or someone you know is having suicidal thoughts, call the 24hr National Suicide Prevention Lifeline at 1-800-273-8255; contact the Crisis Text Line by texting TALK to 741741; or chat with someone online at suicidepreventionlifeline.org.