Eyewitnesses have described the carnage as Iraqi forces opened fire on anti-government protesters during a bridge protest, killing at least 25 people and injuring more than 200.

A fresh wave of protests overnight in the southern city of Nasiriya was met with a crackdown by security forces and resulted in one of the bloodiest days since the unrest began.

A range of different security forces descended on protesters and opened fire on those who were blocking bridges in the city.

Smoke clouds rise from a military base which was reportedly stormed by Iraqi protesters during clashes with security forces in Nasiriyah, some 370km southeast of Baghdad on Thursday 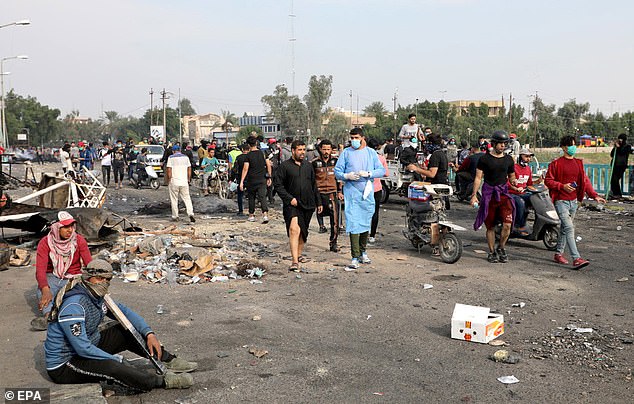 Iraqi protesters gather at a street in Nasiriyah after security forces fired live rounds and tear gas at demonstrators, killing at least 25 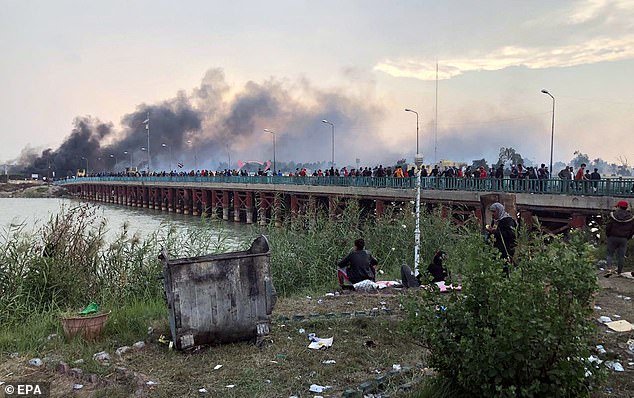 The bloodshed came after the Iranian consulate in the southern holy city of Najaf was dramatically torched in the strongest expression yet of the anti-Iranian sentiment of Iraqi demonstrators.

Witnesses have described the scenes as a ‘bloodbath’ and footage shows troops charging as they fired at protesters with what appeared to be automatic weapons near the city’s al-Zaitoon bridge.

Other verified videos show protesters running from gunfire, or screaming in fear or anguish, as well as tending to those killed or wounded in the violence.

One eyewitness, who wished to remain anonymous, said the protesters had been demonstrating peacefully in the areas around al-Nasr and al-Zaitoon bridges when, at around 3am local time, members of the SWAT, anti-riot and other security forces arrived with a bulldozer to break through the protesters’ barricade. 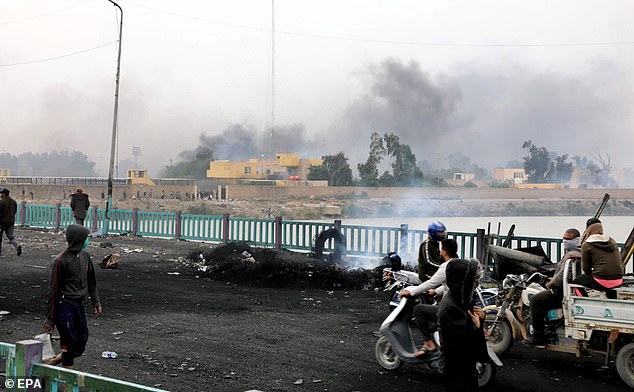 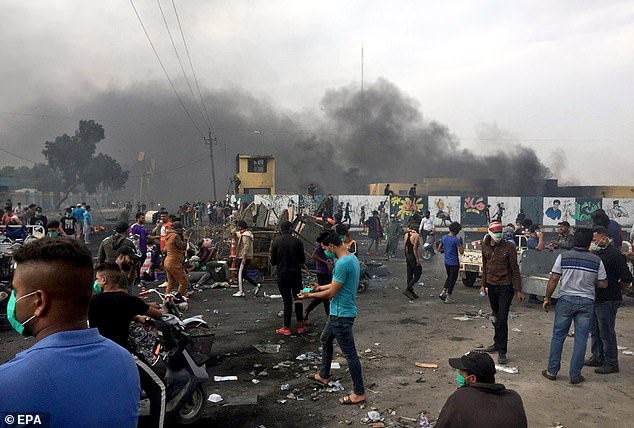 He described the violence that ensued: ‘They opened fire non-stop. They retook the bridge within five minutes … because they would not stop firing and people were running away. I saw at least five people die in front of me.

‘Anyone who was shot and killed was left behind because the forces beat anyone they caught. I saw them beat people like they wanted to kill them.

‘It was a catastrophe … They ended up herding and chasing the remaining protesters towards al-Habboobi Square which is the traditional place for the protests … The shooting was continuous until 7am.

The same man said local residents, angered by the violence, threw stones at the security forces and set fire to the local headquarters of the Federal Police Emergency Response.

Another eyewitness said he went to the area near the bridges shortly after 3am to film the protests. He too described a range of security forces firing large amounts of tear gas and live ammunition, apparently to kill rather than disperse protesters.

He said: ‘They were shooting straight at the protesters but also at the ground. People were being shot in their chest and necks. Most injuries are from the head, chest, neck … there is news that there were snipers. It is like an execution, direct shooting at the head … We were responding to the injuries and the deaths, the street was filled with blood.’

Local residents said that protesters had been gathered in the al-Nasr and al-Zaitoon bridges area since last weekend. On Saturday, anti-riot police shot at the protesters, killing two people and injuring 15. Since then the situation had been largely calm until last night.

Meanwhile, according to the NGO Netblocks, internet connectivity in Nasiriyah dropped significantly at around 5:30am this morning, coinciding with the violent crackdown. 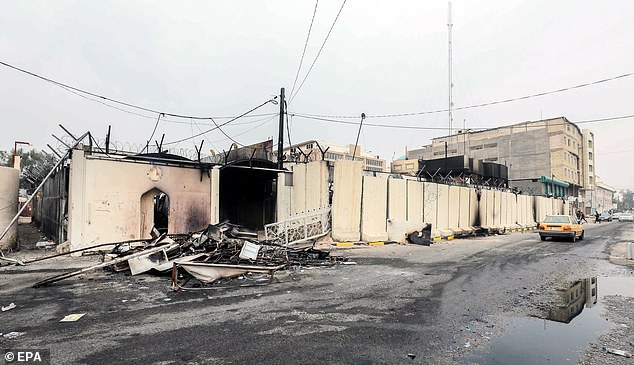 The burnt out Iranian Consulate in Najaf city on Thursday, a day after after hundreds of protesters stormed the building and set fire to it

In the wake of the violence Amnesty International is urging Iraqi authorities to urgently rein in security forces.

‘This brutal onslaught is just the latest in a long series of deadly events where the Iraqi security forces meted out appalling violence against largely peaceful protesters.

‘With well over 300 protesters now dead across Iraq since 1 October, and thousands more injured or arrested, this bloodbath must stop now.

‘The international community must speak loudly and clearly, pressing for Iraq to rein in the security forces.’

Anti-government protests erupted in Iraq on October 1 and have deteriorated into bloodshed in the capital and southern regions, with more nearly 370 people losing their lives.

People are taking to the streets to protest corruption, unemployment and poor public services after calls on social media.