Australian basketball star Liz Cambage has been accused of racism after she called a coach a ‘little white man’ in response to his disrespectful comment about her weight.

The WNBA All-Star, who plays for the Las Vegas Aces, hit back at Connecticut Sun head coach Curt Miller in an Instagram post on Sunday after he encouraged an official to call a foul against her while saying: ‘C’mon, she’s 300 pounds.’

‘I will never let a man disrespect me, ever, ever, ever, especially a little white one,’ Cambage, 29, told her 580,000 followers in an explosive rant after the game.

‘Don’t ever try to disrespect me or another woman in the league.’

But now, people have taken to Twitter to condemn Cambage’s remarks as racist, some even calling them worse than his.

‘I like Liz Cambage, but she clapped back by calling him a “little white boy”?? That’s even ground for suspension if we’re playing this game,’ one critic, Rob Stukenborg, posted on Twitter Tuesday.

Another critic slammed the New York Times for ‘conveniently’ leaving out Cambage’s ‘racist’ comment in its report about the controversy. 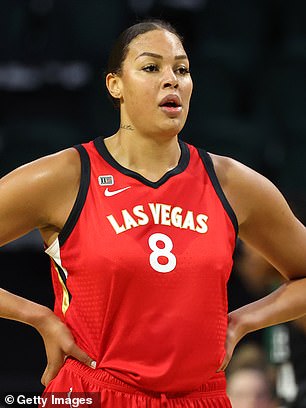 Connecticut Sun coach Curt Miller (left) urged a referee to call a foul on center Liz Cambage (right) in a game against the Los Angeles Aces Sunday, calling her ‘300 pounds.’ Cambage later posted a video response to her Instagram page in which she called him a ‘little white’ man, earning some backlash among fans

‘Notice the @nytimes conveniently forgot to publish the part where @ecambage goes full racist, says “I will never let a man disrespect me…especially a little white one.” It was literally the comment right after where they cut off her quote,’ user @work_together12 wrote.

Fellow critic Richard Bradley tweeted: ‘I just don’t get how it’s wrong for a coach to say a player weighs 300 pounds but it’s acceptable for a player to refer to that coach as “a little white one.”‘

Another Twitter user, Frankie, wrote:  ‘So Liz Cambage can get mad at a man for bringing up her size in the heat of a game, but it’s okay for her to say that she will ‘never let a little white man’ disrespect her? What she said is worse lmaooo.’

And Kyle G. asked if we are just going to ‘ignore the fact that Liz Cambage … made that about race with her comment back to the coach?

‘No need for his comment, but absolutely no need to add ‘white’ in hers,’ he wrote on Monday. ‘This is why America has a race issue! Both should get fined!’

Miller was suspended one game for his comments on Monday and was issued a $10,000 fine. But some Twitter users said they thought Cambage should face repercussions for her comment on his race as well.

He wrote that Cambage should also be suspended for her comment. 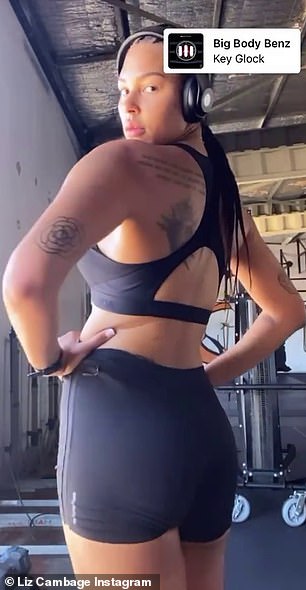 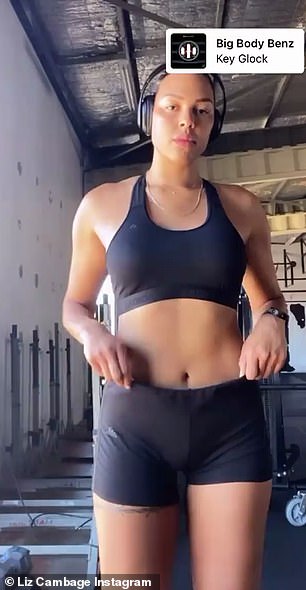 Cambage has played professionally in China and Australia, in addition to the US. She is a three-time WNBA All-Star and in 2011, she was named MVP of the Australian league, the WNBL.

After posting the video criticizing Miller, the 6-foot-8 All-Star doubled down on her critique of the coach, by sharing another video of her in the gym wearing a black sports bra and bike shorts as she showed off her muscular frame while working out to ‘Big Body Benz’ by rapper Kidd Kidd.

Before her gym session, Cambage said she was ‘very proud of being a big b****’ and weighed herself tipping the scales at just 235 pounds, not 300 like the coach had suggested.

She said Miller was ‘so lucky (his outburst) was during a game.’

‘You were so lucky that I was doing my job,’ she said of Miller, whose name she failed to remember during the recording. 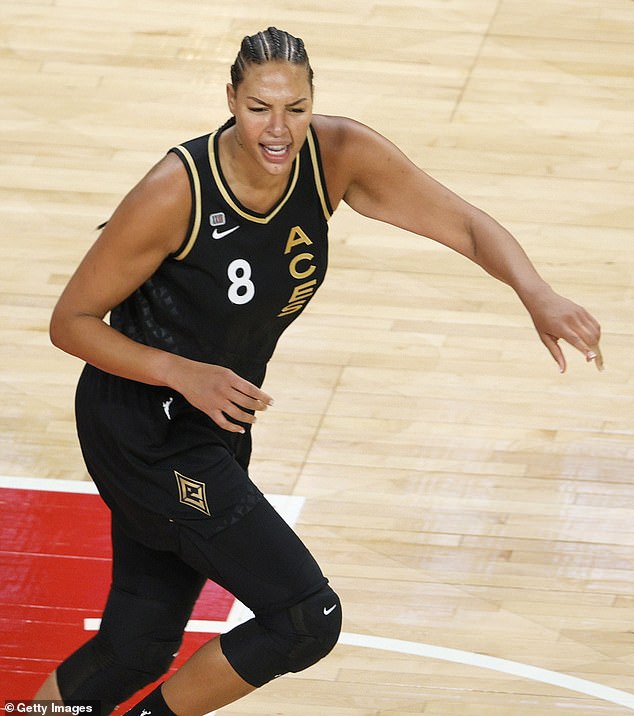 Cambage plays center for the Los Angeles Aces, and is a three-time WNBA All-Star 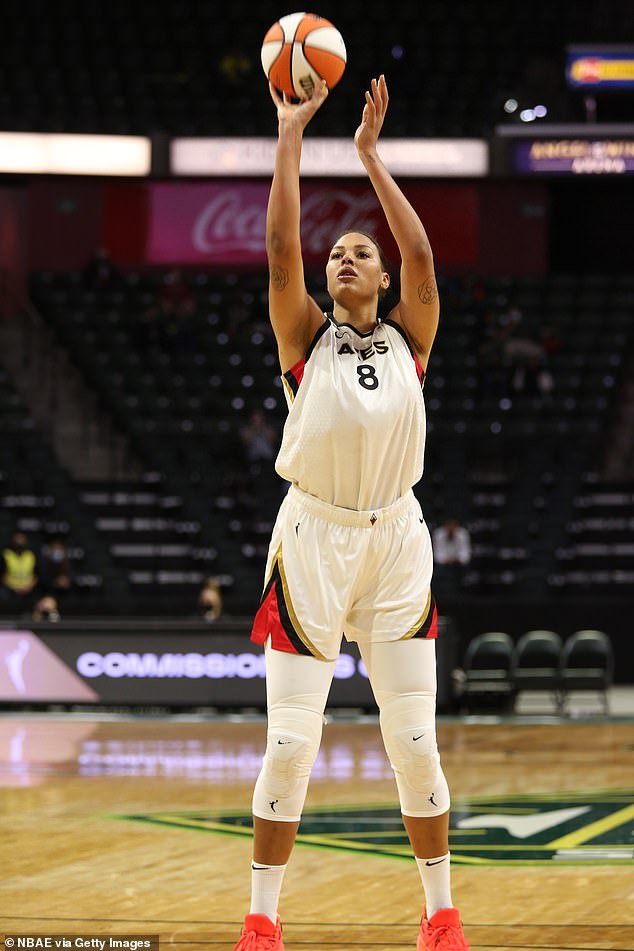 She was named MVP of the Australian league, the WNBL in 2011 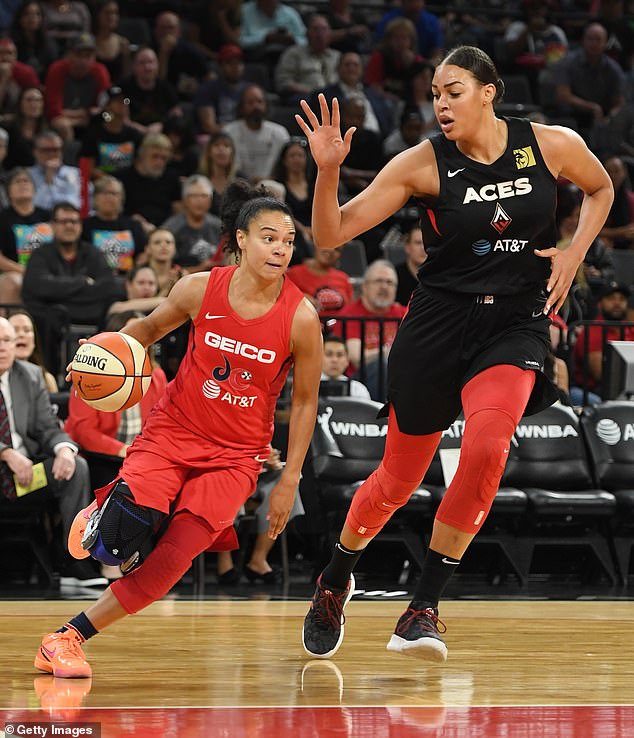 Cambage went on to say that Miller’s comments were more egregious than playful trash talk between players.

‘But for a coach for another team to be yelling, like, protected abuse,’ she said, ‘because we can’t do nothing back. It’s just crazy to me.’

Miller, who is now in his sixth season with the Sun, issued an apology on Monday.

‘I made an inappropriate and offensive comment in reference to Liz Cambage’s height and weight,’ he said.

‘I regret what I said in the heat of the moment and want to sincerely apologize to Liz and the entire Aces organization. I understand the gravity of my words and have learned from this.’