Woman, 23, born with a crooked back gains two inches in height after gruelling seven-hour surgery

A woman born with a crooked back has gained two inches in height after a gruelling seven-hour operation.

Lydia Platton, 23, originally from North Yorkshire, was diagnosed with a group of four spinal conditions, including scoliosis, in 2010 at the age of 15.

Her self-confidence plummeted during her teenage years, due to her ‘disgusting back’, which caused ‘fat rolls’ on one side of her waist.

After a failed spinal fusion surgery in 2015, Miss Platton, who now lives in Norway, was shocked to see her back continue to curve.

She is now unable to bend over and is unable to work due to the heaviness of the metal in her back, which is painful and becomes ‘squeaky’ in the cold.

Lydia Platton, from North Yorkshire who lives in Norway, was diagnosed with a group of four spinal conditions, including scoliosis, in 2010 at the age of 15

Miss Platton’s self-confidence plummeted during her teenage years due to her ‘disgusting back’, which caused ‘fat rolls’ on one side of her waist. Pictured, before her surgery 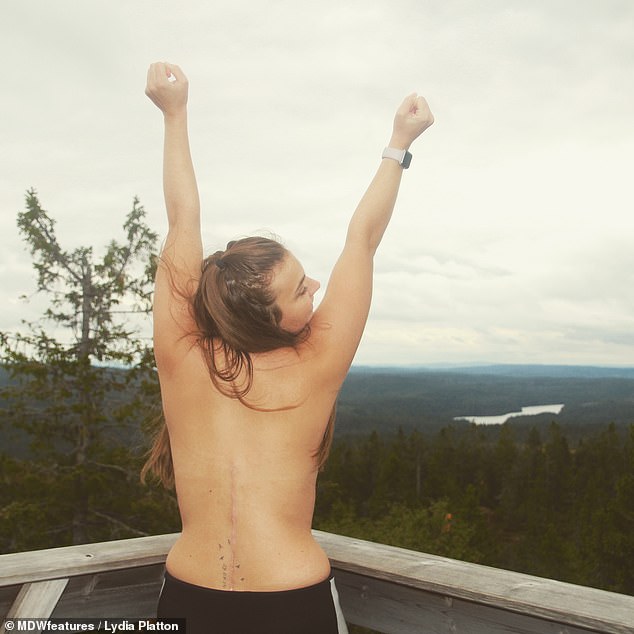 Now, Miss Platton loves the scar on her back and her 2inches of extra height. However, she said she is unable to work due to the heaviness of the metal in her back

Miss Platton said: ‘My body always feels so heavy now. At the end of a day just being at home I really struggle to stand up straight because of the pain.

‘Because of the surgery I can no longer bend at my hips, which is super annoying when I need to get something from the floor.

‘It’s also made it hard to sleep and I feel like the rods and screws are constantly pulling.’

Miss Platton said that her back becomes so cold it ‘feels like she has an ice pop stuck down the centre of it’.

‘Living in Norway, it’s very cold this time of year and being outside for long periods of time makes my metalwork start to squeak and my back become very tight and uncomfortable,’ she said.

‘I shouldn’t complain, I’ll be ever so grateful to both of my surgeons for trying to fix my problematic spine.’

Miss Platton was diagnosed with the three conditions; spondylitis, spondylolisthesis, and spondylosis in October 2010, three months after her unofficial scoliosis diagnosis in July 2010.

She had been suffering with debilitating symptoms since 2009, but doctors initially thought it was due to a recent hip fracture.

‘It took over a year visiting three different hospitals for doctors to discover what was actually wrong with me,’ Miss Platton said.

Spondylitis is a type of arthritis that affects the spine, spondylolisthesis is a condition that causes the vertebrae to slip out of place and spondylosis is a fracture to the vertebrae.

Scoliosis is a condition where the spine twists and curves to the side. It can affect people of any age but usually starts in children aged 10 to 15. 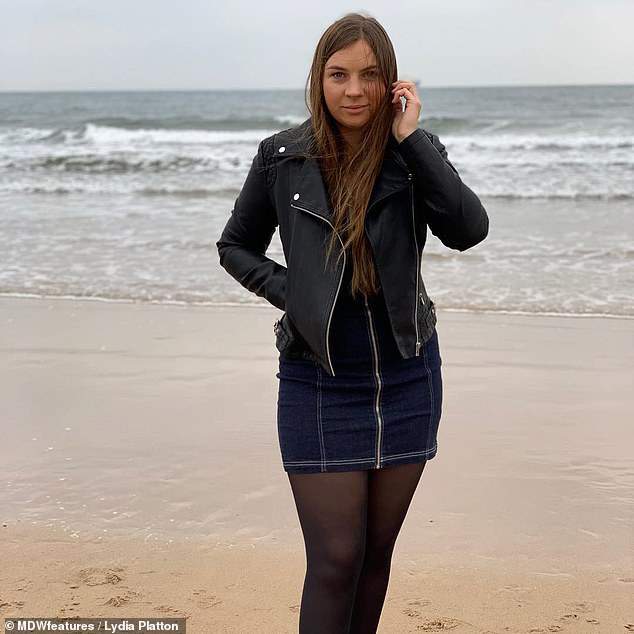 Miss Platton said that her back, full of metal, becomes so cold it ‘feels like she has an ice pop stuck down the centre of it’ and it ‘squeaks’ 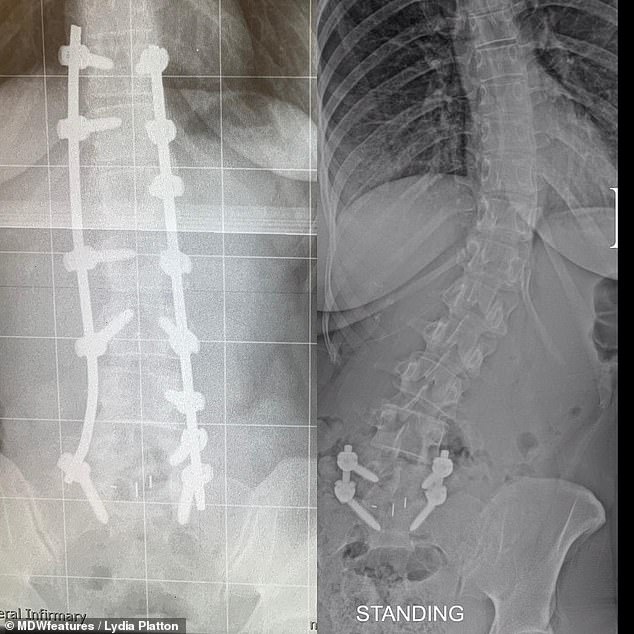 Miss Platton’s second surgery in July 2018 to correct her scoliosis left her with a total of 13 bolts and long rods in her back, as well as a 12-inch scar 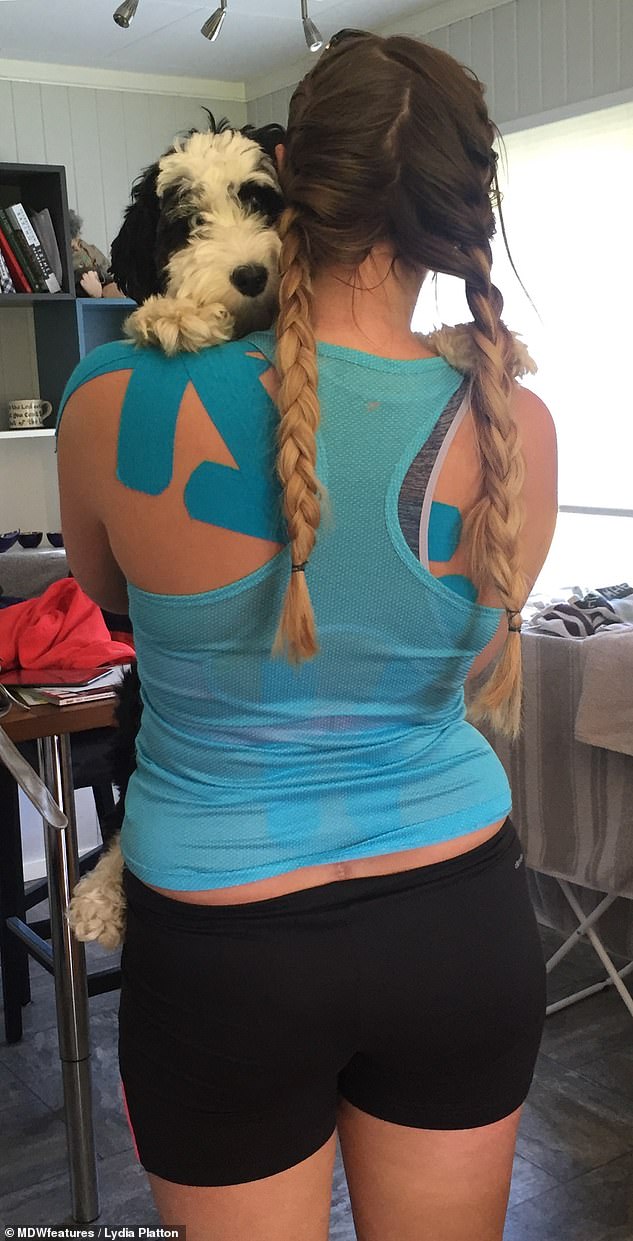 After Miss Platton’s gruelling seven hour open-back surgery, she recovered quickly in the following two weeks. But her recovery slowed over the next six months

The conditions affected Miss Platton’s life for most of her teenage years as the pain forced her to take days and even weeks off school.

She said: ‘Growing up with these conditions was hard. Missing out on lots of school, social events and being unable to live a normal teenage life sometimes quite isolating.

‘Other kids didn’t necessarily understand my problems and maybe thought I was weak because I would let it get to me so much? Maybe that’s just how it came across, but it sure did feel like it at times.

‘I had started to notice my scoliosis in my teenage years but was unable to do anything about it because of my other conditions.’

In February 2011, Miss Platton received a cortisone injection into her nerve root to try to reduce the pain she was in – but this was unsuccessful.

She later had her first spinal fusion surgery in July 2015, whereby her vertebrae L5/S1 were stabilised and decompressed with four bolts, a bone graft and two small rods.

But not long afterwards, Miss Platton noticed that the curve in her spine, caused by her scoliosis, was still increasing – although it is not clear to what degree of curve it reached.

As well as experiencing pain from her other conditions, her curvature affected her self-confidence as she hated ‘the rolls’ that were on her right-hand side.

‘Before my surgery my scoliosis would impact me all the time, my self-confidence especially,’ Miss Platton said. 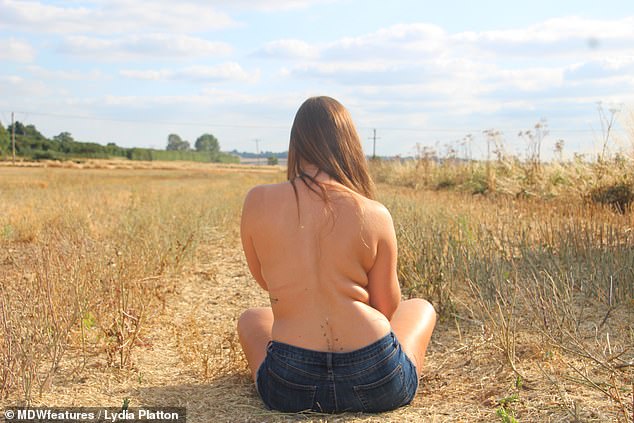 Not long after surgery in 2015, Miss Platton noticed that the curve in her spine, caused by her scoliosis, was still increasing

‘I would be so wary about what clothes I could wear because I didn’t want anyone to see how disgusting my back looked.

‘I used to hate my rolls that were on my right-hand side that my scoliosis caused as I always thought they made me look fatter than I was.’

Further surgery in July 2018 replaced the metalwork with longer rods and nine further bolts to reduce the curve in her spine.

‘I was on a High Dependency Unity (HDU) for two days after and another four days on a specialist spinal ward,’ Miss Platton said.

‘The recovery that my body made within the first two weeks after the surgery was incredible. It was amazing just how quickly my body recovered from being face down on the operating table for seven hours with my back sliced wide open.

‘However, the rapid recovery within those two weeks soon slowed down as I’m now almost six months post-operative and I’m still unable to go back to work.’ 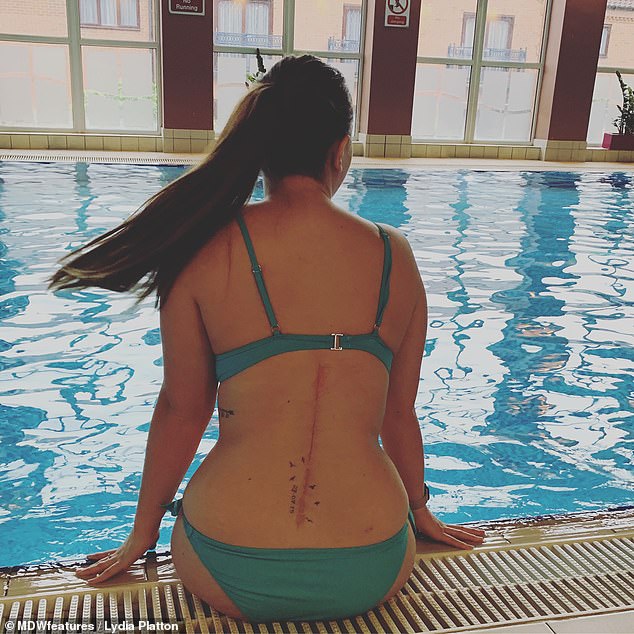 Miss Platton is unable to pick things up from the floor, work or drive due to pain. She said it feels as though the ‘rods are going to rip or tear all the time’ 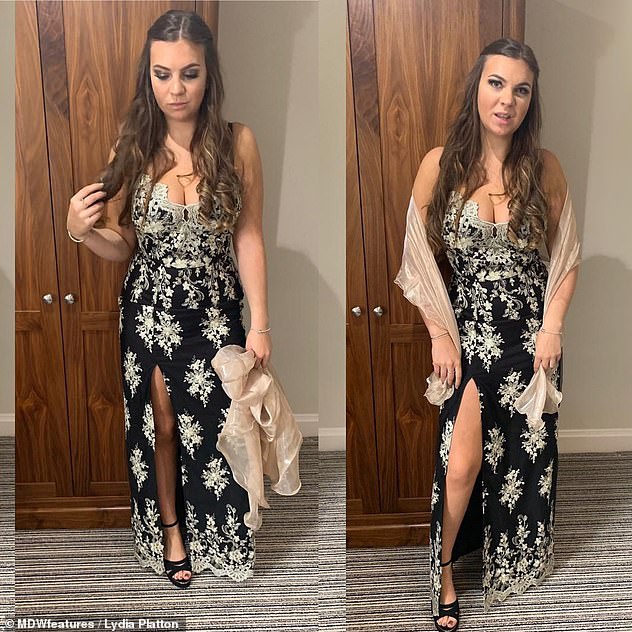 Miss Platton said: ‘Screening for scoliosis used to happen in schools and I would like to fight for that to be brought back into place’

Unfortunately, Miss Platton has struggled to get used to the metal in her new back.

She said: ‘I still have lots of pain during the day as it feels like the rods are going to rip or tear all the time.

‘I haven’t driven since my surgery as I’m unable to because of the pain and medication I’m on and also because I can’t do a lot of the movements that driving requires me to do.

‘It also causes me a lot of stress and anxiety if I get invited to go somewhere with friends or family. I always worry that if my pain gets really bad that I won’t be able to get home, no one will help me, or that people will think I’m attention seeking.’

Miss Platton avoids being outside for extended periods of time in winter as the cold causes her metalwork to squeak.

She said: ‘It limits how long I can be outside for this time of year. I’m also super nervous about falling on the ice, which would sure would hurt a lot. So, if I’m by myself, I tend to stay indoors.’

Miss Platton does, however, love her extra height, taking her from 5ft 8inches to 5ft 10inches, and the scar on her back.

‘It took me a long time to accept that there are a lot of things that I won’t be able to do again, things that I loved,’ she said.

‘But that’s the card I got dealt and that’s ok. I’m going to live my life as well as I can.

‘Screening for scoliosis used to happen in schools and I would like to fight for that to be brought back into place.

‘Three out of 100 people have scoliosis and if they are given braces at the right age, which can’t be done for all cases, then it may mean that they might not have to have the surgery.’

How do you perform Anterior scoliosis correction to straighten the back?

Scoliosis causes the spine to curve to the side instead of running straight down the back.

The curve can affect any part of the spine and there can be more than one curve.

Anterior scoliosis correction (ASC) aims to reduce the degree of the curve and untwist it using screws and a flexible cord. 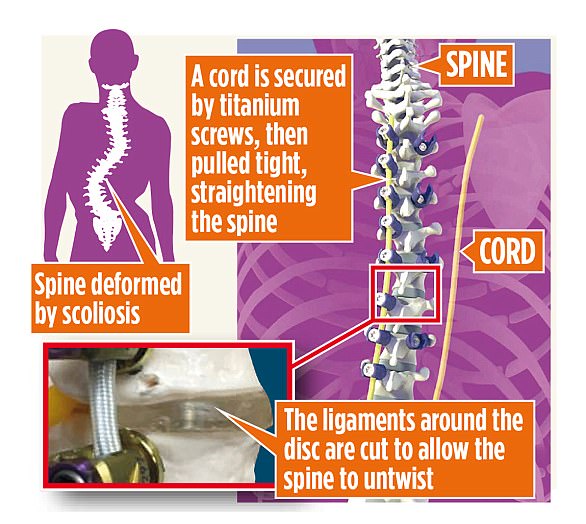 Doctors access the front of the spine via a 3-4in incision made in the side of the patient’s body.

A titanium screw is inserted via this incision into each vertebra affected by the curve.

In very large rigid curves, the discs between vertebrae and the ligament running down the spine are abnormally stiff, restricting flexibility, and may require cutting. This allows the spine to untwist and straighten better.

A flexible cord is then inserted vertically down the spine and held in place by the screws.

This is pulled tighter from the top vertebra to the bottom vertebra of the curve, pulling the spine straight.