Woman, 24, was paralysed from the neck down hours after she woke with a sore neck

A woman who woke up with a sore neck and was paralysed from the neck down just hours later is raising £10,000 for treatment in Oman.

Helen Fincham thought she had just slept awkwardly when she woke with an ache in August 2016, aged 21. By midday, she was struggling to breathe.

Later that afternoon, Miss Fincham was paralysed from the neck down and could not even ‘wipe her own tears’.

Doctors were baffled by Miss Fincham’s decline, until tests months later eventually revealed she was suffering from the rare neurological condition transverse myelitis.

After months of rehabilitation, Miss Fincham, of Bridgend in Wales, became able to ‘flinch’ her hands. This was followed by small arm movements and eventually an aided push up.

Miss Fincham’s ordeal led to her being invited to the Royal Garden Party in June, where she met Prince Charles. 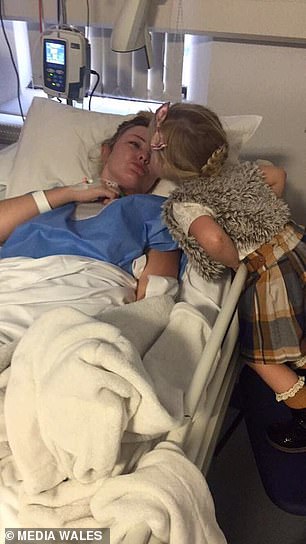 Helen Fincham (pictured left before) woke with a sore neck only to be paralysed from the neck down hours later. She was rushed to hospital (seen right), where doctors were baffled by her decline for months. Tests eventually revealed she was suffering from transverse myelitis 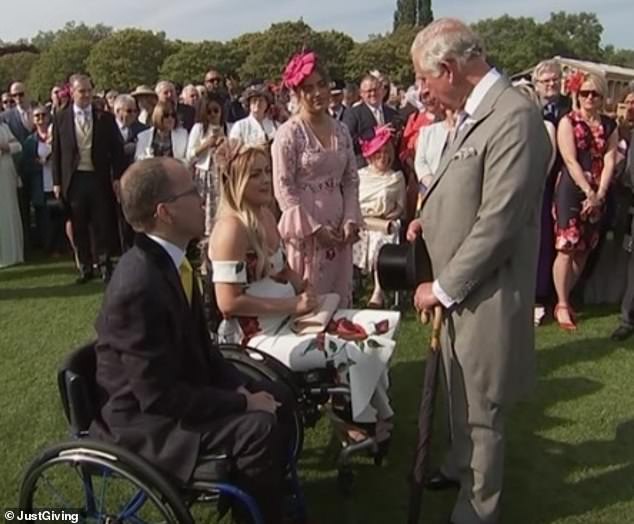 Miss Fincham was invited to attend the Royal Garden Party, where she met Prince Charles (pictured). The Prince of Wales was so moved by her story, his staff got in touch to recommend a doctor who could help. She is now fundraising for treatment at a recovery centre in Oman

Miss Fincham woke with a stiff neck after enjoying a day at the beach with her niece. A few hours later, she was lying on her bed, trying to relieve a tight chest.

‘I have never been ill in my life so I knew something was really wrong,’ Miss Fincham said.

‘I was struggling to breathe and all of a sudden I was having pains in my arm,’ The Mirror reported.

Miss Fincham phoned her GP, who told her to call an ambulance immediately.

Paramedics arrived and tried to help Miss Fincham stand, only for her to collapse in their arms.

Once at hospital, doctors asked her parents if she had taken drugs, while they carried out tests to uncover what was wrong.

‘Everyone was clueless [as to] how my complete paralysis came on out of nowhere in less than an hour or so’, she previously told Wales Online.

Once diagnosed, Miss Fincham spent a year in rehabilitation at Rockwood Hospital in Cardiff.

‘Everything was taken from me at 21,’ she said. ‘I would even cry at night yet couldn’t wipe my own tears.

Miss Fincham now lives in an adapted ground-floor flat, where she receives seven hours of care a day.

‘I can move my arms enough to feed myself but I can’t cut up food or prepare anything like that,’ she said.

Miss Fincham relies on a carer to wash, dress and move her. 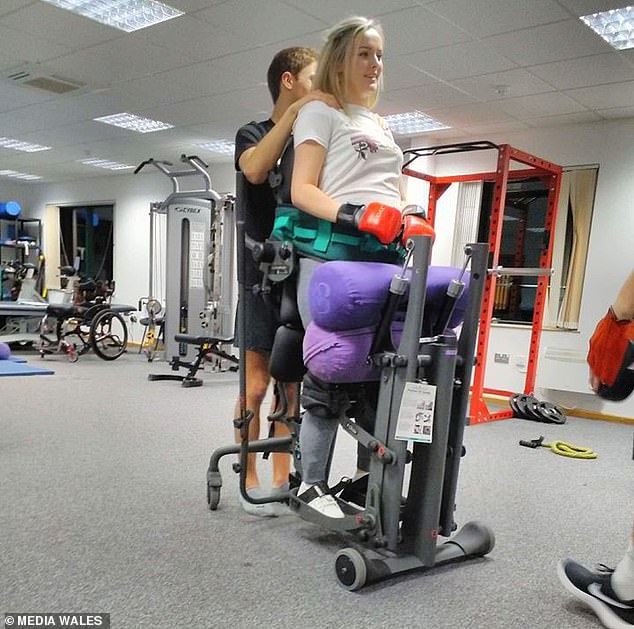 After months of rehabilitation at Rockwood Hospital in Cardiff, Miss Fincham became able to twitch her hands. She now travels to the private spinal-cord injury centre Neurokinex in Bristol once a week for physiotherapy (pictured). A five-week course costs £700 ($843) 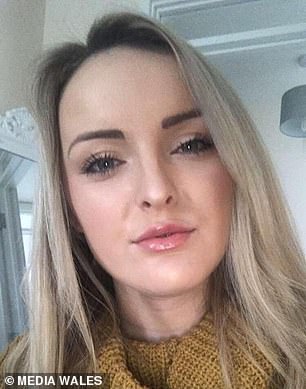 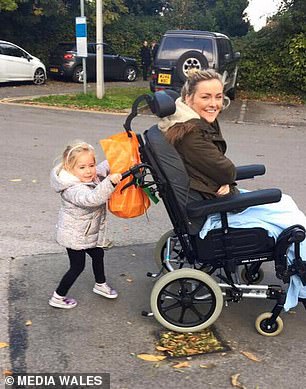 Miss Fincham (pictured left before the ordeal) is ‘adamant’ she will get better with the right treatment. For now, she is dependent on a wheelchair to get about (seen right)

WHAT IS TRANSVERSE MYELITIS?

Transverse myelitis is a neurological disorder that occurs when both sides of one section of the spinal cord become inflamed.

This damages the material myelin, which covers nerve cells.

Transverse myelitis interrupts the messages that the spinal cord sends throughout the body.

This can cause pain, muscle weakness, sensory problems, incontinence and even paralysis.

Around 300 new cases are thought to be diagnosed every year in the UK and 1,400 in the US, statistics show.

The condition may be caused by infections, conditions like multiple sclerosis or autoimmune disorders.

IV steroids into the spinal column can reduce inflammation.

Most patients at least partially recover.

Once a week, she travels to the private spinal-cord injury centre Neurokinex in Bristol for physiotherapy, with a five-week course costing £700 ($843).

‘Adamant’ she can get better with the right treatment, Miss Fincham launched a JustGiving page to raise money for treatment at a recovery centre in Oman.

This came about after she met Prince Charles at the Royal Garden Party during her first ever trip to London.

Miss Fincham was invited down through the charity Bridgend Coalition of Disabled People.

Speaking of the meeting, Miss Fincham told BBC Radio Wales: ‘He said he was really gutted it had happened and asked, “would I ever get better?”.

‘I replied “no” because that is what I’ve been told.’

Once home, the Prince of Wales’ ‘master of house’ rang Miss Fincham to tell her of the ‘impact’ her story had on him and to recommend ‘Dr Ali’.

Miss Fincham met with the medic, who told her about a recovery centre in Oman.

‘He and I are both adamant I will get better,’ she wrote.

Miss Fincham is speaking out to raise money for the treatment, as well as to cover her flights and accommodation. Donate here. 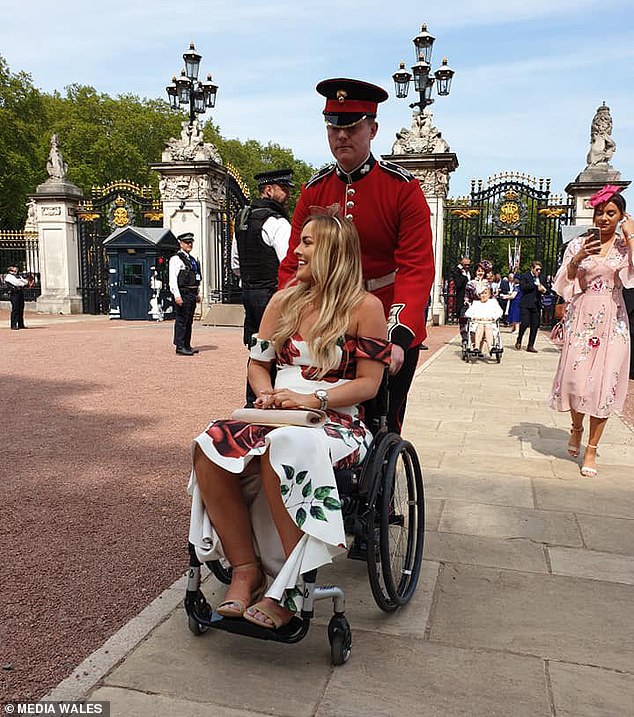 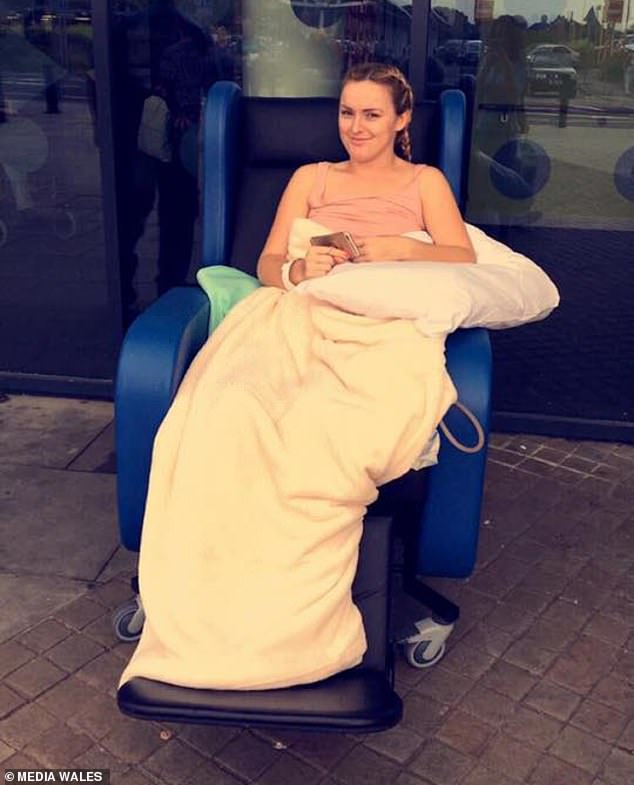 Although she is making progress, Miss Fincham admits she still has ‘bad days’

WHO IS DR ALI? THE NATUROPATH FAVOURED BY THE PRINCE OF WALES

Dr Mosaraf Ali is naturopath and ‘expert in ayurvedic medicine’.

The ‘medic’ claims he has studied both complementary and traditional medicine. In 1998 he opened the Integrated Medical Centre in London.

Since then he has penned eight books, and has columns in You magazine and Top Santé.

He claims he can use these techniques to treat anything from eczema and flu to rheumatoid arthritis, while also helping to ‘rehabilitate stroke’.

Dr Ali alleges to have helped paralysed people walk through ‘a special massage designed to improve blood flow to the brain’, The Guardian reported.

The late Tara Palmer-Tomkinson is even quoted as calling him ‘the eighth wonder of the world personified’ after Dr Ali treated her for her cocaine habit.

As well as being the Prince of Wales’ ‘therapist’, Dr Ali was enlisted by the Duchess of Cornwall to help her ‘re-energise’ and quit smoking.

But Dr Ali faced controversy in 2008 when an ex-patient launched legal action over ‘negligent’ care.

The patient claims Dr Ali said he would help him walk again after two strokes left him in a wheelchair. The ‘medic’ is said to have dismissed pain and coldness in the man’s legs.

He was later diagnosed with chronic lack of blood supply and had to have both limbs amputated mid-thigh.

The General Medical Council (GMC), which licenses doctors in the UK, previously said Dr Ali is not on their registers.

His medical degree is said to have come from the Patrice Lumumba Peoples’ Friendship University in Moscow in 1980.

The GMC claims ‘Doctor’ is a courtesy title that can be used by anyone with medical or academic qualifications.