Woman, 28, has huge uncontrollable tumours on her legs and hips

A woman with huge tumours growing on her legs and hips is desperately trying to find more than £32,000 to get treatment in India.

Karina Rodini, 28, suffers from a condition called neurofibromatosis which has left her unable to work or find a boyfriend and barely able to leave the house.

Now mostly housebound, Miss Rodini’s mother had to quit her job to look after her and she has been rendered an outcast in her neighbourhood in Sao Paolo, Brazil.

She has had seven operations already and kilos of the giant lumps have been removed but she is no closer to living a normal life.

Karina Rodini, from Sao Paolo, Brazil, was diagnosed with neurofibromatosis when she was just two years old and it was only brown patches of skin, but over the years her condition has spiralled out of control and now the tumours are so large they can’t be removed

Following surgery in a public hospital in October last year, Miss Rodini says, her legs have doubled in size and left her struggling to walk.

She cannot find clothes to fit her, struggles to sleep because she is so uncomfortable and has worsening vision in one eye because of the condition.

Despite her being diagnosed at the age of two and having a nine-kilogram cyst removed when she was 12, doctors haven’t managed to get the illness under control.

‘It’s been very hard to find a job because sometimes I have to get the day off to go for a doctor’s appointment,’ Miss Rodini said.

‘Now, nobody wants to give me a job just because of the way I look. Everywhere I go people stare at me.’

She added: ‘My legs are double the size and no clothes fit me. All I can wear is [the] same old skirt every single day.’

Miss Rodini’s mother, Fatima, 58, said it has been ‘very hard’ to see the disease ‘consume’ her daughter.

Miss Rodini has visited doctors in both Sao Paolo and the city of Curitiba, where she managed to find a surgeon who would operate.

She has since had surgeries every two to three years but only around a kilogram of flesh can be removed in each procedure because she loses so much blood.

Neurofibromatosis type one is a genetic condition which causes tumours to grow along someone’s nerves.

The tumours it causes are soft and not cancerous, and the illness can also cause problems with the eyes and bones.

It is usually easy to diagnose, the NHS says, but there is no cure. Treatment involves surgery to remove any growths, pain management and psychological support. 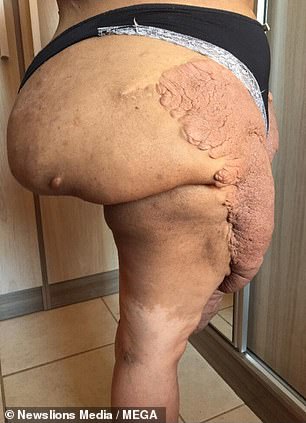 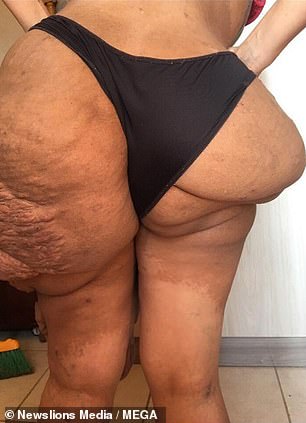 Doctors believe Miss Rodini has type one neurofibromatosis, a condition in which soft, non-cancerous tumours grow along a patient’s nerves

Her love life has come to a standstill because of the illness, too.

Patricia, Miss Rodini’s youngest sister, is studying in Canada and said the tumours have destroyed her sibling’s confidence.

‘When it wasn’t so bad, she dated a few guys,’ Patricia said, ‘But, after the tumour disfigured her body, she has completely confined herself to the home.’

Miss Rodini has now found a hospital in India which is willing to try and tackle the entire of her growths – she says the waiting list at public hospitals in Brazil is too long and the family could not find a doctor they were happy with.

Dr Ashwini Dash, a reconstructive surgeon in Indore, a city in the centre of the country, said: ‘This is a case of type one neurofibromatosis. Her problem area is the waist down to the knee in both legs.

‘We need to get a CT scan done to be able to understand the growth of the tumour and, once the CT scan is done, we can do a further diagnosis of the case.

‘If the patient is brought to India, we can definitely try and give her a life-changing treatment.’ 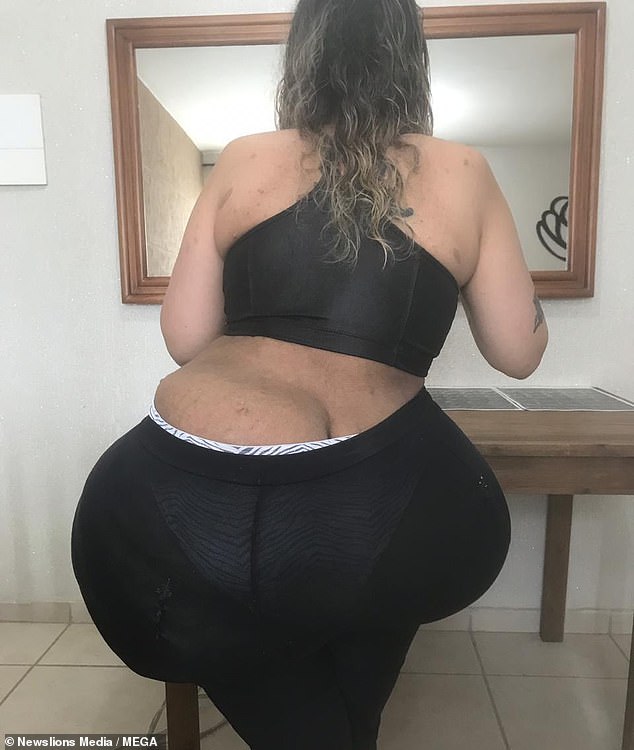 Miss Rodini has now found a hospital in India which is willing to try and tackle the entire of her growths but it could cost her more than three million Rupees (£32,000) 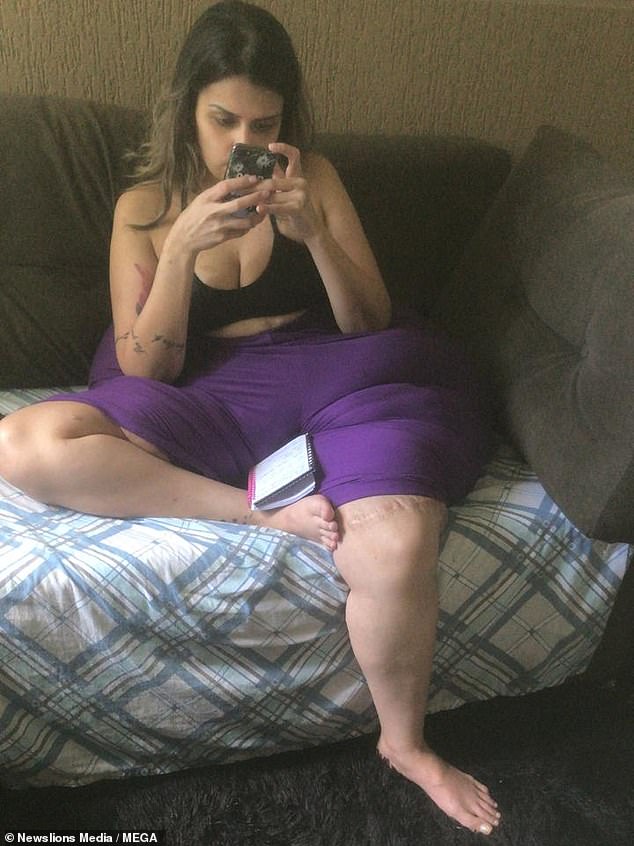 The condition has impacted on Miss Rodini’s love life, her sister said, and she barely leaves the house any more despite dating men when she was younger

But Miss Rodini cannot afford to pay for the CT scan, let alone the approximately three million Rupees (£32,000) the medical treatment would cost.

Her sister Patricia has started a GoFundMe page and the family hope to raise the money from donations.

Miss Rodini said: ‘I am a forward-looking, optimistic person.

‘I am sure with the help of the kind people I will finally manage to get the right doctor and necessary money for treatment somewhere on Earth.’

Neurofibromatosis is the name of a group of conditions that cause lumps to grow on the coverings of nerves.

NF is caused by a mutation in one of the genes. About half of the people who have NF have no family history of the condition.

This is called a spontaneous gene mutation. The other half of people will have inherited NF from their mother or father.

Some sufferers are affected by neurofibromas, which usually appear during adolescence.

These may first appear on the skin as a purplish mark, before a small fibrous lump appears.

They can also grow along deeper-seated nerves inside the body, which can be painful if knocked.

The lumps can increase in number during a person’s lifetime.

NF has also been linked to an increased risk of stroke if growths develop on nerve cells in the brain and cut off the organ’s blood supply.

There is no treatment to stop the lumps from appearing, although surgery or laser treatment can sometimes be used to remove them.