Woman, 29, horrifies her family by marrying a man 30 YEARS her senior

A woman who married a man 30 years her senior has revealed that her family has accused her of trying to replace her father – while her husband has admitted his adult daughter is horrified by their age-gap romance.

Co-parenting coordinator Renee Chicoye, 29, and warehouse manager Alberto Santiago, 59, from Fort Lauderdale, Florida, attended the same local church together for years but had not taken the time to speak to each other before they ended up sitting alongside each other at a movie night in August 2019.

‘I served at church as a kids ministry greeter and he was in the church traffic team so we always said hi but never had a long conversation until our church had a movie night,’ Renee said.

When you know, you know! Renee Chicoye, 29, and Alberto Santiago, 59, from Fort Lauderdale, Florida, wed on July 25, less than a year after they started dating 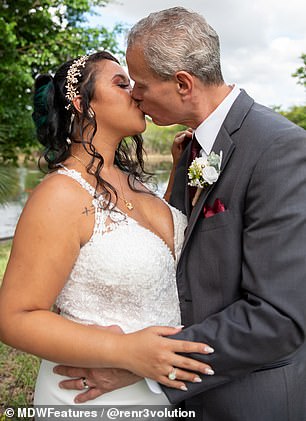 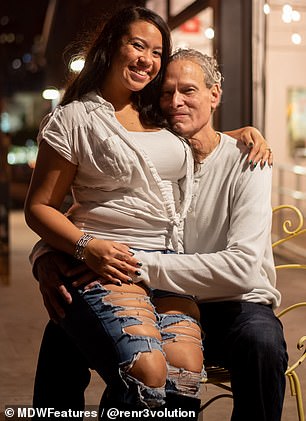 Start of it all: The couple attended the same local church together for years, but they hardly ever spoke up until they ended up sitting together at a movie night in August 2019 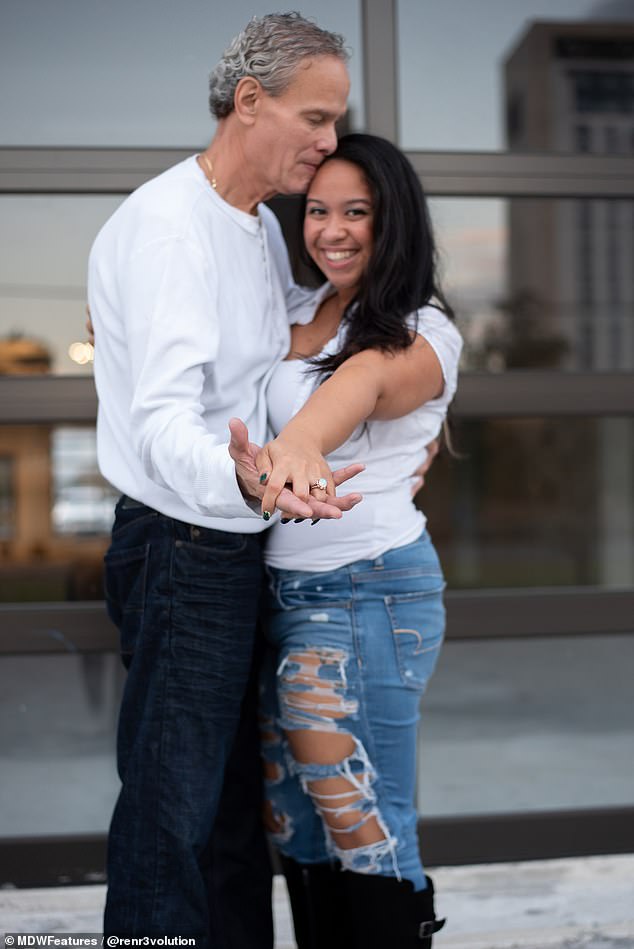 Made to be: Sparks flew during the movie, and they started dating a week later

With Renee arriving late to the screening and unable to find her friends in the darkness, she sat down next to Alberto.

‘In the movie our arms touched, I got nervous and my heart started beating fast,’ she recalled. ‘I noticed he didn’t move away so I didn’t either.

‘The next day I met with my girlfriends and told them how I sat next to the guy with the cool salt and peppered colored hair and nice smile.’

‘One of my girls told me to go for it and I didn’t hesitate,’ she added. ‘I thought we were moving insanely fast the entire time, but it just didn’t feel wrong so I didn’t stop it.’

A week after the movie, the pair exchanged numbers and began dating. Less than a year later they were married on July 25, 2020.

‘His hair just made me want to know about his life,’ Renee said. 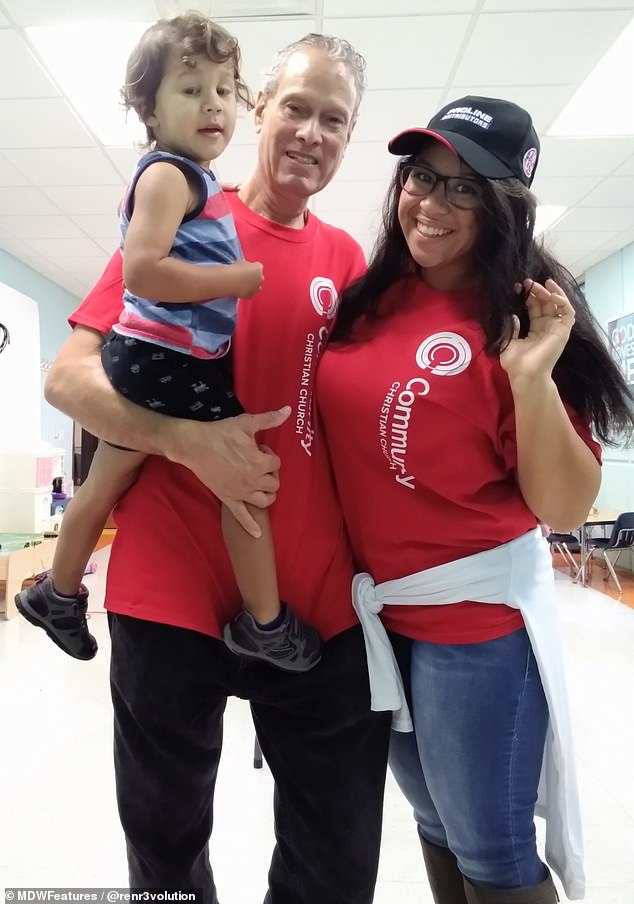 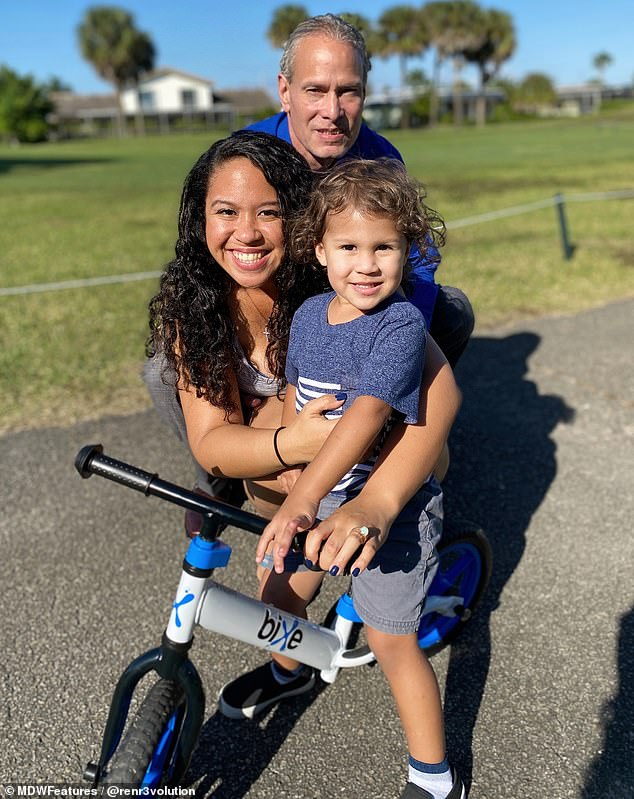 Hard to handle: Both of them have faced backlash from their families because of their massive age gap

Not everyone was approving of their relationship, however.

A member of Renee’s distant family pulled Alberto aside during a family holiday to tell him that he should know better than to start a relationship with a woman half his age.

‘One member of my family questioned why I was looking for another dad when I already had one,’ she admitted. ‘Others wondered what would happen in 15 years’ time if my son wanted someone to run around and play basketball with him but my partner of choice is too old.

‘It was a rocky start and we didn’t give them a lot of time to adjust, but they’re our biggest supporters now.

With Renee being a big fan of social media, the couple hasn’t been immune from ignorant comments online. Their massive age gap has led to some strangers to call them names.

‘Since I’m so public, on TikTok we’ve received comments about how I’m after money or a green card,’ Renee explained. ‘People call him grandpa and think I’m his daughter. We hear stereotypes like “gold digger” or “cradle snatcher,” too.’ 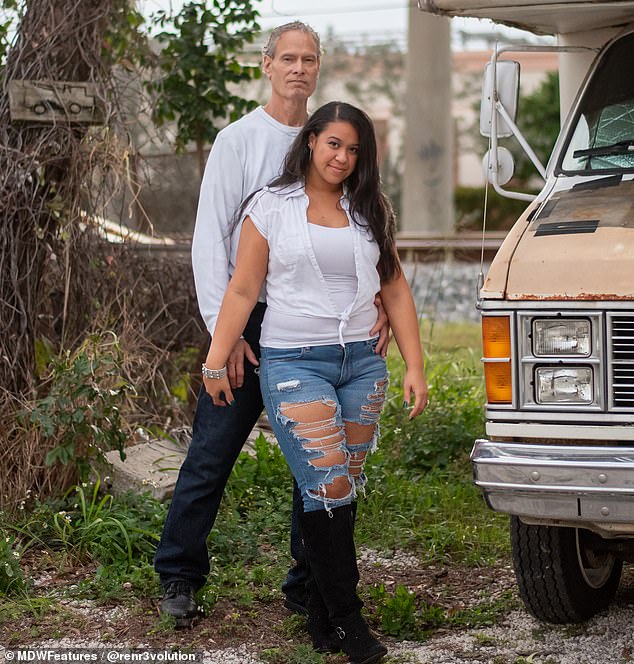 Accusation: One of Renee’s family members asked her why she is ‘looking for another dad’ when she already has one 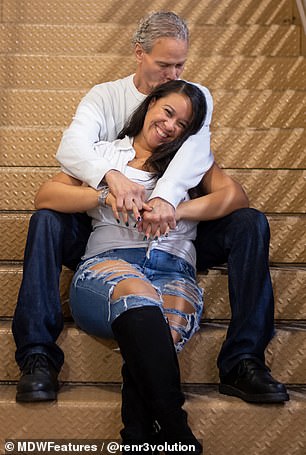 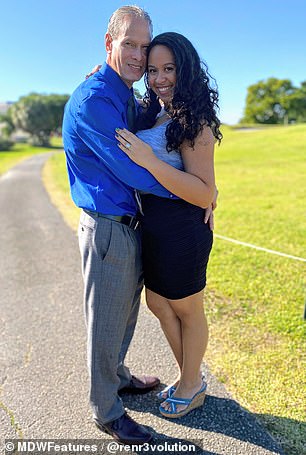 Uncomfortable: Alberto admitted that their sudden blossoming romance hasn’t been easy for his daughter Isabella, who is just 10 years younger than Renee

Renee said the only problem in their relationship is that they connect in different ways, with her often making TikTok videos or posting pictures of them together on Facebook.

‘Being so public with my affection is my way of showing my love for him,’ she said. ‘Since he’s thirty years older, he spends time differently, playing card games or reading the bible.

‘It’s hard to be on the same page sometimes about how love is to be shown.’

Alberto admitted that their sudden blossoming romance hasn’t been easy for his daughter Isabella, who is just 10 years younger than Renee and finds it difficult to understand why her dad would want to be with a much younger woman.

Renee ahas a three-year-old son, East, and members of Alberto’s family questioned if he really wanted to go through the young parenting stage again, so many years after doing it the first time with his now-adult daughter.

‘Going from being a single mom at 25, to having someone around who had parental knowledge to help when my son cries in order to give me a break has been a huge benefit,’ she noted. 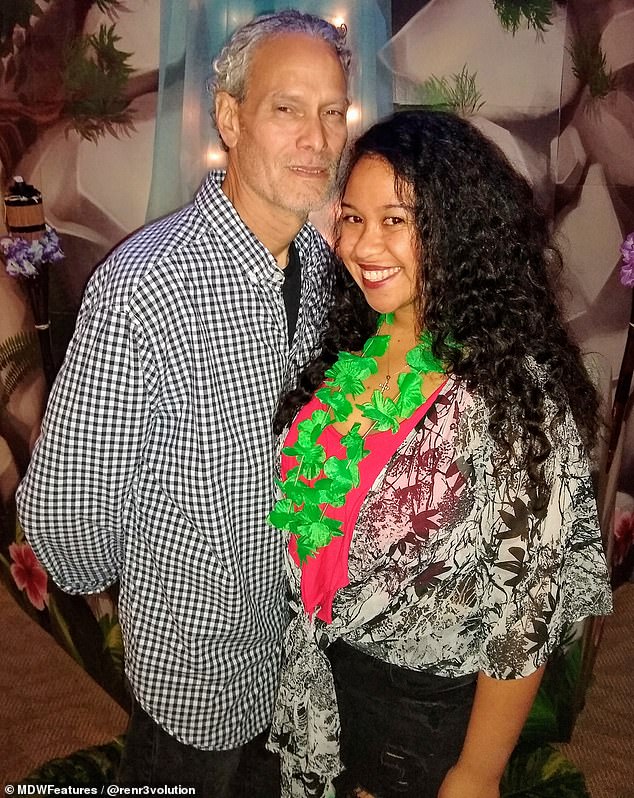 Meant to be: ‘I didn’t set out to find somebody thirty years older than me, but I can see a person for who they are,’ Renee said 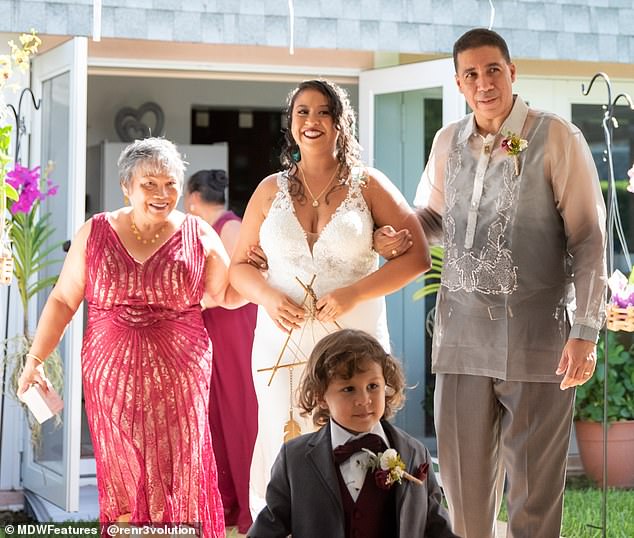 Changes: The couple had to change their wedding plans and get married in Renee’s uncle’s backyard because of the COVID-19 pandemic

‘Because my son is still young, he requires a lot of attention so trying to find personal time to build our relationship isn’t always easy.

‘But Alberto puts me before everything and is always thinking of me. It’s hard to even believe anyone could offer themselves so much to someone else.’

The couple insists that love doesn’t have boundaries, and, if anything, their 30 year age gap has made their relationship more interesting as they approach life from very different perspectives. 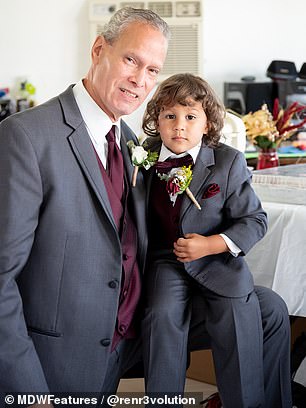 Stepdad: Alberto and East wore matching suits to the ceremony attended by their family and friends

They’ve even navigated the COVID-19 pandemic together.

The church wedding the couple had carefully planned for July 25 had to be canceled in favor of a lower-key ceremony in Renee’s uncle’s backyard as a result of the global crisis.

However, having to adapt and overcome this problem is something the couple believes will stand them in good stead as they go forward into their married life together.

They also hope that strangers and family who might be skeptical of their relationship will also be able to adapt and show them the support they deserve.

‘I didn’t set out to find somebody thirty years older than me, but I can see a person for who they are,’ Renee said.

‘We’re not breaking any laws, and for those who may be critical of age gap relationships, I would like to send a message of hope that maybe one day they can see past their judgments.

‘All people have intrinsic value as a God-given gift,’ she added. ‘We just want to keep falling in love with each other every day with the hope that any trial we have to face will make us stronger for our children to give them the best lives that we can.’