Woman, 32, discovers her boyfriend of eight years is posed by her best female friend

Woman, 32, is devastated to discover her boyfriend of EIGHT YEARS was actually her FEMALE best friend posing as a man online to steal her savings

A woman in China has been devastated after discovering that her boyfriend of eight years was actually posed by her best female friend who has lured her to fork over more than £55,000 over the years.

The 32-year-old victim, named by police as Yi Yi, claimed to have been in a long-distance relationship with a sailor named A Feng.

Yi Yi said she and A Feng were very much in love and she had given the man all her savings, however they had never met in real life or talked to each other on the phone due to A Feng’s work.

The victim (in white) went to police for help after her so-called boyfriend forced her to transfer money to him. She said they had been in a relationship for eight years, but had never met

A desperate Yi Yi went to the police for help last month after she said A Feng forced her to transfer a large sum of money to him to help cover his medical bills.

A Feng claimed that he was gravely ill abroad and was in need of the funds to get treatment, the woman told police officers.

She cried as she told officers that she could not afford to help A Feng, adding she had already given him more than 500,000 yuan (£55,192) during their relationship.

After Yi Yi provided A Feng’s bank details to the police, officers soon tracked down the man who owned the account.

The man, who is indeed called A Feng, claimed he was not a sailor and he also had a girlfriend of eight years whom he had never met.

‘Every time when I invited her out on a date, she always declined or said she was ill,’ he told a reporter from criminal news programme Oriental 100 which followed the story. 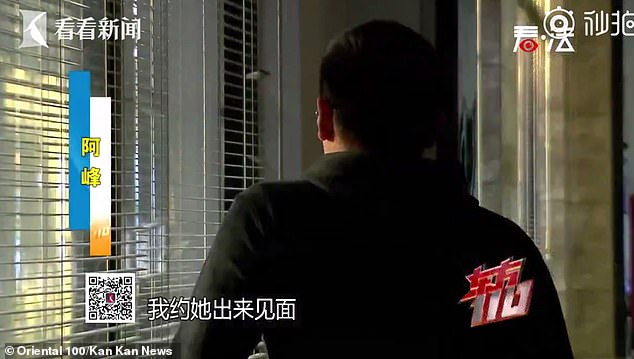 Meanwhile, a man called A Feng (pictured) told police he had a girlfriend of eight years whom he had never met. Police discovered both victims had a neutral friend, who could be the key

Police achieved a breakthrough of the case after noticing Yi Yi and A Feng had a mutual friend named Xiao Lei.

It turns out that Yi Yi and A Feng did go out briefly eight years ago after being introduced by Xiao Lei.

But when the couple decided to break up, Xiao Lei started to contact Yi Yi, posing as A Feng, and begged her to resume the relationship.

Xiao Lei did the same with A Feng, and therefore kept two fake relationships running at the same time. 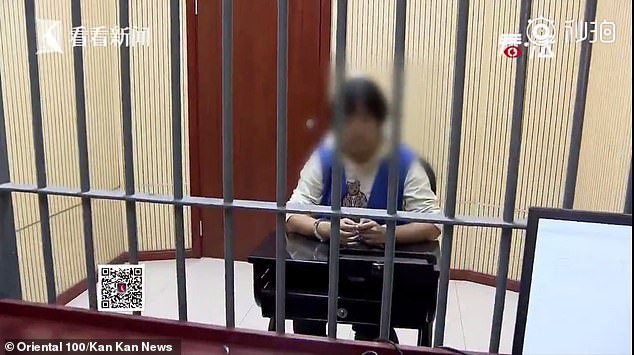 Xiao Lei (pictured) confessed that she had managed to run two fake relationships with his friends for money. She contacted Yi Yi posing as A Feng and wooed A Feng, posing as Yi Yi

Xiao Lei would take pictures of A Feng from the man’s social media account and send them to Yi Yi while telling the love-struck woman that he had to spend a long time overseas because of his job.

In a raid to Xiao Lei’s home, police officers found a mobile phone which was used by the suspect to contact both victims.

The suspect has confessed to her guilt to the police.

She claimed to have used the money provided by Yi Yi to cover her debt.

Xiao Lei has been detained on suspicion of fraud.