Woman, 32, is charged with intoxication manslaughter after Texas judge dies in highway collision

Texas woman, 32, is charged with intoxication manslaughter after she ‘drove the wrong way down an interstate and collided with two vehicles,’ killing a 65-year-old judge

A woman alleged to have been driving drunk killed a Texas judge on Saturday night when police say she drove the wrong way and collided with two vehicles.

Megan Smith, 32, has been charged with intoxication manslaughter after the fatal collision which took place in the northern Texas town of Royse City at around 9:30pm on Saturday.

According to local police, Smith, a resident of Royse City, was driving the wrong way in the westbound lanes of Interstate 30, NBCDFW reported.

She then struck two vehicles who were driving from the opposite direction.

Justice David L. Bridges, 65, a longtime judge who had served on the bench of the Texas 5th Court of Appeals, was in one of the vehicles that was struck by Smith’s car, according to authorities. 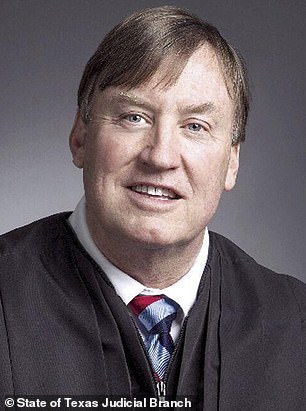 Megan Smith (left), 32, of Royse City, Texas, has been charged with intoxication manslaughter after police said she drove the wrong way down an interstate on Saturday night, crashing into a car driven by Justice David L. Bridges (right). Bridges was pronounced dead at the scene

Bridges’ car then burst into flames. The judge was pronounced dead at the scene.

The driver of the second vehicle was not injured.

Smith was rushed to a nearby hospital and treated for minor injuries. She was booked into Hunt County Jail after she was released from the hospital.

Bridges was elected to a judgeship in the 5th District Court of Appeals in 1996, according to his biography.

He served in the United States Army in 1973 and 1974. After his military service, he worked at the General Electric plant to put himself through Tyler Junior College and the University of Texas at Tyler.

After a stint working as a petroleum landman along the Appalachian Mountain range, Bridges attended the Texas Tech School of Law.

He was also a senior disciplinary counsel and first assistant in charge of litigation for the State Bar of Texas.