Woman, 49, claims psychic friend told her spirit to get back into physical body

A woman whose heart stopped beating for forty minutes claims she is no longer frightened of ‘dying again’ after she had a spiritual awakening.

Kirsty Bortoft, 49, revealed what she believes happened after she was rushed to hospital when her fiancé Stu, 47, found her unresponsive in their living room in January last year.

The anxiety mind coach from North Yorkshire claimed she was encouraged to move her spirit back into her body after a psychic friend contacted her while she was in a coma.

After coming back from the brink Kirsty is sharing her story on TikTok videos which have been viewed hundreds of thousands of times. 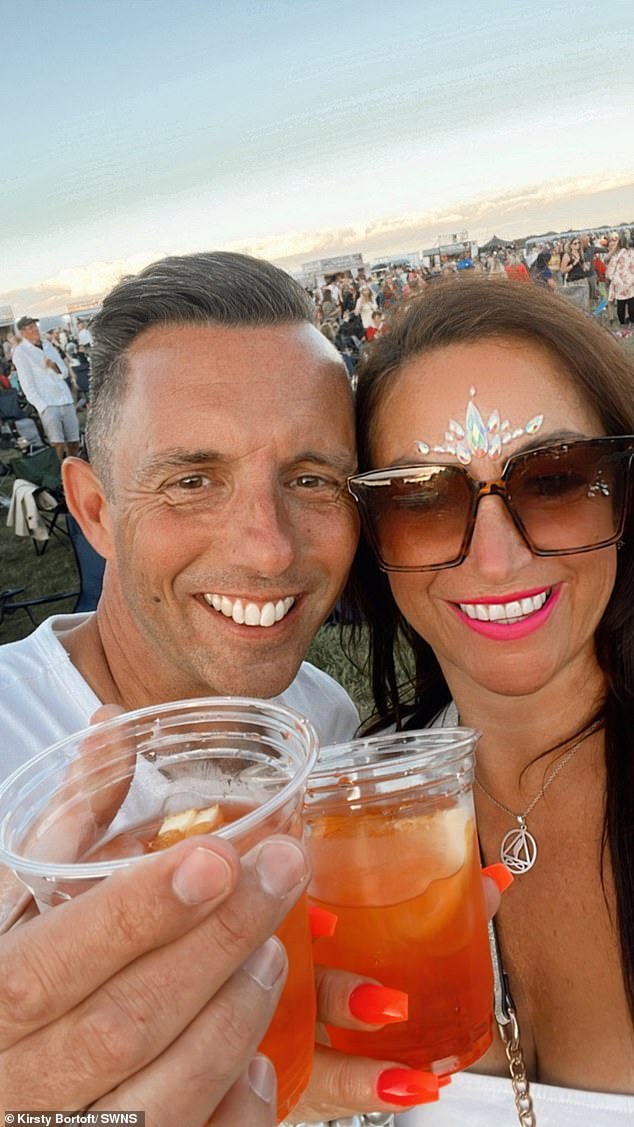 Kirsty Bortoft (pictured) 49, says she’s no longer scared of ‘dying again’ after being rushed to hospital when her fiancé Stu (pictured), 47, found her unresponsive in their living room in January last year

Mother-of-three Kirsty stopped breathing when her fiancé found her, before medics trying to save her said she had less than a six per cent chance of survival.

She then suffered another cardiac arrest and was placed in a medically induced coma for her own safety, with her family told to ‘expect the worst.’

But Kirsty – then unconscious – claims something ‘magical’ soon happened – and she was ‘brought back’.

‘Everything changes when you get a second chance at life,’ she said. ‘On the night I was in A&E, the team kept losing me and they decided to put me into a coma to stabilise my heart. 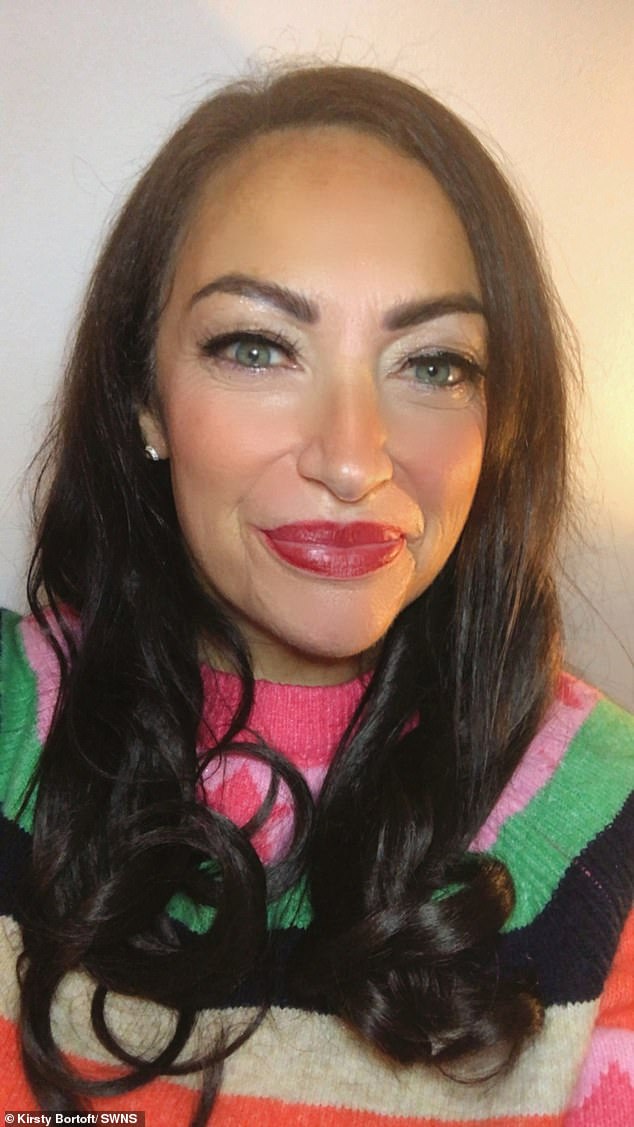 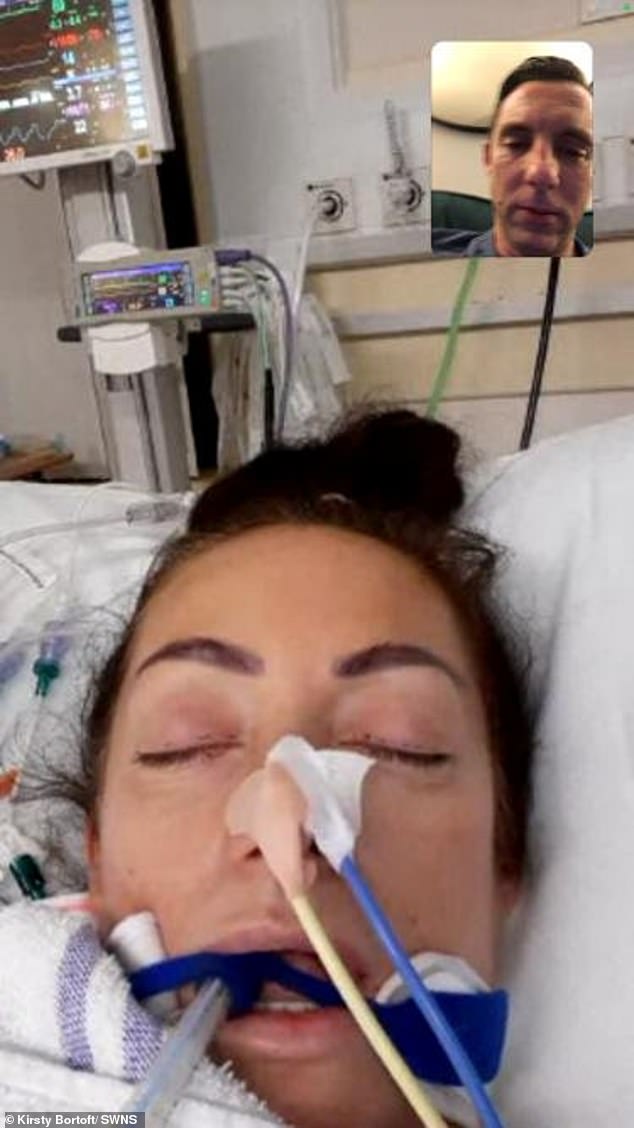 At the hospital, the anxiety coach said the first night ‘wasn’t looking good’ – but Stu ‘wasn’t having any of it’. Pictured through Face Time with Stu in January 2021

Kirsty said the friend advised that her ‘spirit was in her front room’, and was ‘asking her to write lists for my boys and dad’.

‘My sister told her I was in the hospital fighting for my life and apparently, I was there for over two hours,’ she explained. ‘I told [my friend] that my body was breaking down and I didn’t think I could back get into it, but she got stern with me and told me to go back.

‘Meanwhile, in the hospital, my family were being told to prepare themselves for the end.’

Recalling the evening of the shock incident, Kirsty said she was looking forward to a romantic night in with Stu, as her father offered to cook pizza for her sons. 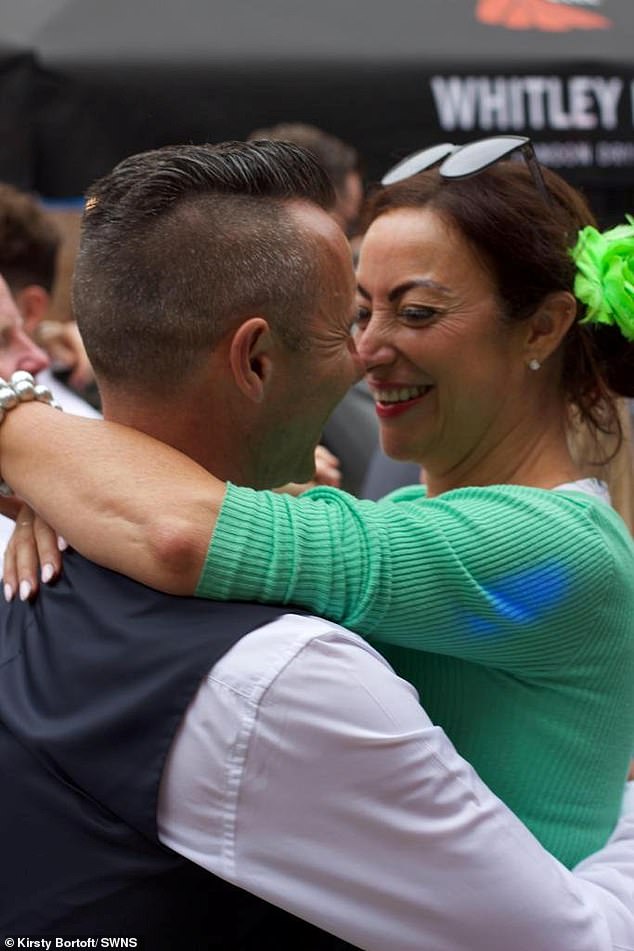 But as the fiancé walked in, he was greeted with his bride-to-be – whose skin turned a ‘dark red mahogany’ colour.

At the hospital, Stu was told the situation ‘wasn’t looking good’ – but he ‘wasn’t having any of it’, insisting to see her via video call and telling Kirsty that they should get married once this the ordeal was over.

‘He contacted all the meditation groups I was in and he spoke to friends who were religious to start off a wave of healing work,’ Kirsty recalled.

‘His faith and ability never wavered, even when being told the prognosis still wasn’t looking any good – but he remained confident that I was coming home.’ 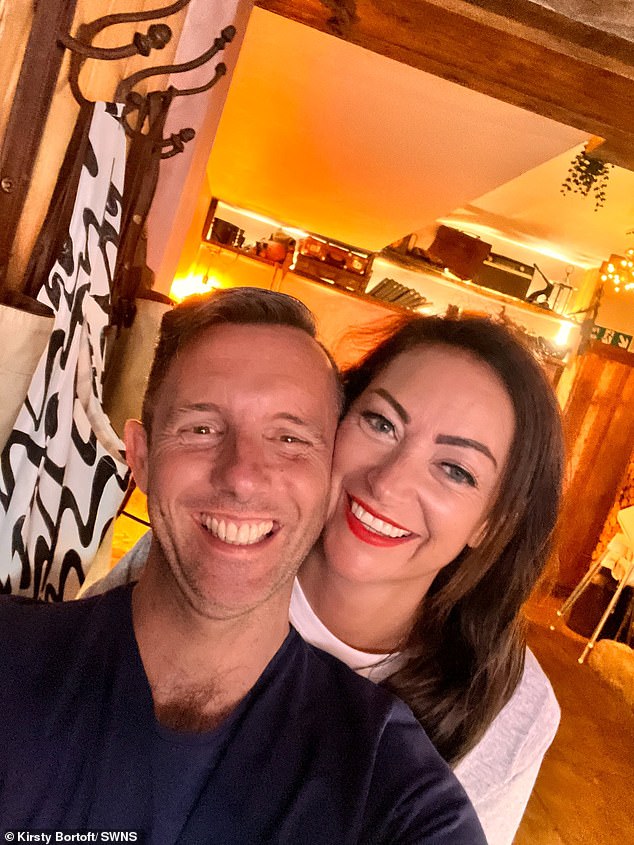 The next morning, Stu was informed every function of Kirsty’s body was being run on a machine, but they were hopeful about bringing her out of the coma and monitoring how she would cope.

While unsure if there was any brain damage, they ultimately decided on turning off her life support and letting her own body do the work – and Kirsty said after coming around, she instantly asked for Stu.

‘I began to cry overwhelmed, she said. She added her doctors had only ever seen one other case like hers, where the patient survived with hardly any issues.

Kirsty and Stu have since remarked on other ‘unknown’ factors which helped Kirsty make it through the ordeal, such as her fiancé cancelling a last minute client meeting to see her the night of the incident. 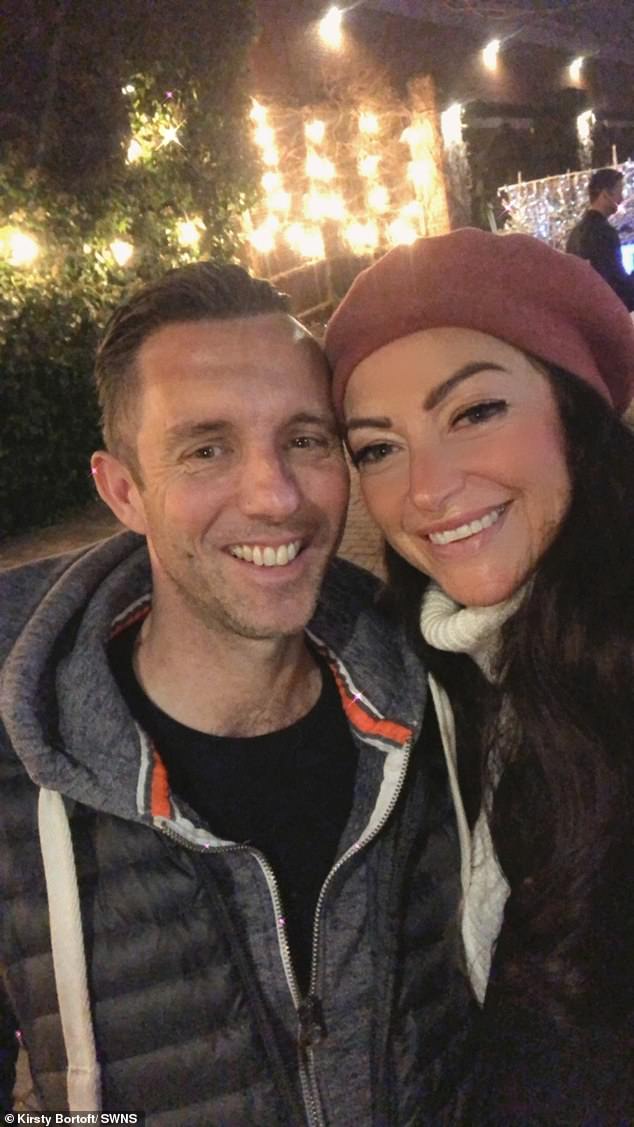 Kirsty (pictured with Stu) added the radiographer was ‘in shock’ when X-raying her lungs on day ten, remarking on how quickly she was recovering

Stu proposed only days after the dramatic scare – and the couple are planning to get married in 2023.

Kirsty also believes that her body healed faster because she sped up the process through her mind.

‘I recall upon finally coming back in to my body, that I knew exactly what I needed to do to heal, like a download of information,’ she explained. ‘I realised you don’t die, only your body moves on and that my mission here wasn’t over yet.

‘Without the dark, you don’t know what light is and I believe we’re here to wake up, grow and refine our vibrations.’

Kirsty said she meditated everyday, imagining a ‘white golden light flowing through the cells of her body’. 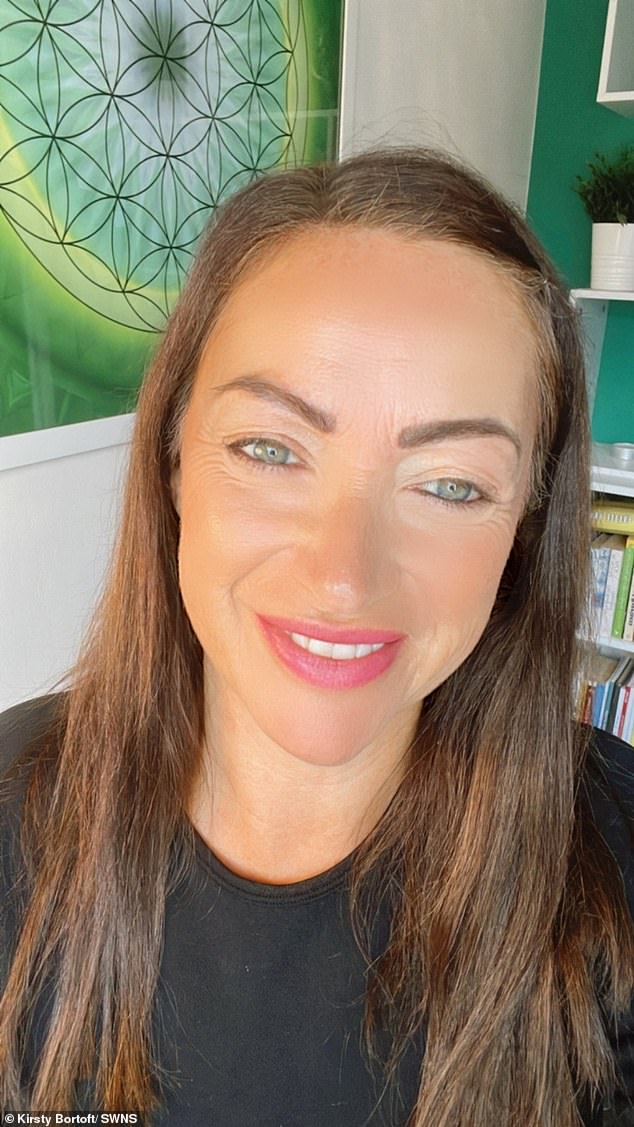 Now, Kirsty (pictured) hopes to share her story with others, in a bid to help with worry, overthinking and anxiety

The mother has in past revealed how she went to Spain in 2011 and became a monk in 2015 after dealing with the struggles of a previous toxic relationship. She now practices the techniques learned from the Ishaya Monks to help others.

‘People would laugh when I would say: “I know I may have just had a near death experience, but I’m fit and healthy”,’ she said. ‘I knew what I was doing.’

She added the radiographer was ‘in shock’ when X-raying her lungs on day ten, remarking on how quickly she was recovering.

‘He asked my permission to show the results to his team and he was flabbergasted, as the scarring and water had practically gone,’ Kirsty said. ‘I told him I healed my lungs and he asked how, so I shared my story. I left feeling elated and excited about my recovery.’ 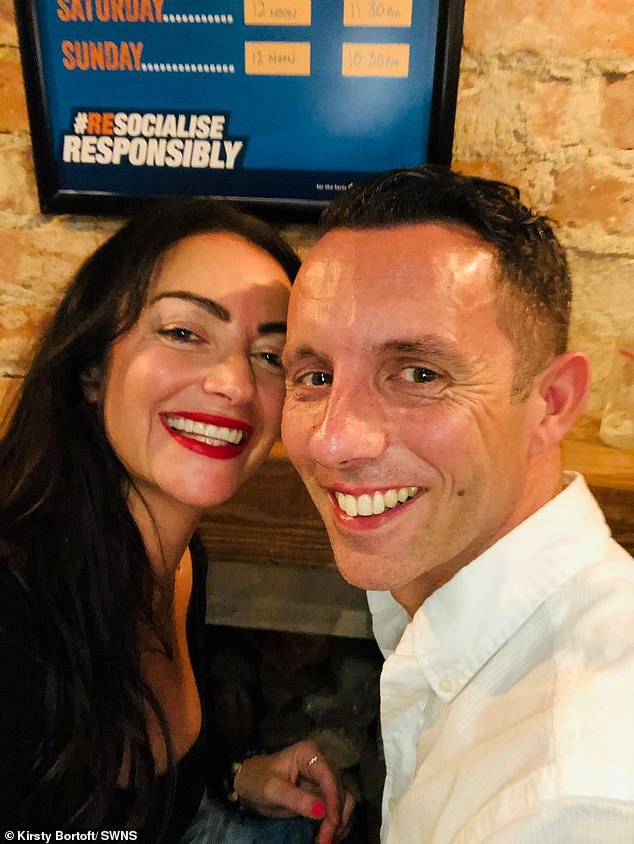 Now, she hopes to share her story with others, in a bid to help with worry, overthinking and anxiety.

Kirsty added: ‘I don’t waste any time worrying or overthinking and this has meant I’m now a braver version of myself, with no regrets.

‘Worry is a construct of the mind when you negatively use your imagination and place it in a moment of the future – it’s all an illusion.

‘You’re here to experience the spectrum of emotions, not hold onto them and beat yourself up.

‘I have stopped focusing on what I do not have and appreciating everything I do have.

‘I can walk, see, hear and my brain is bright, I could go on – but the thing I’m most proud of is allowing life to unfold from an anchored place of inner trust.

‘I feel blessed, as I’ve been given a second chance at life.’