A woman is in a critical condition after suffering a traumatic head injury from an indoor skydiving accident.

The woman, in her 50s, was indoor skydiving at the iFly Indoor Skydiving facility in a Westfield in Chermside in Brisbane when she suffered the accident at around 4pm on Thursday.

iFly have five locations across Australia and over 80 worldwide.

A woman in her 50s is in a critical condition after receiving a traumatic head injury at an iFly indoor skydiving facility in Chermside, Brisbane (pictured) on Friday afternoon

Paramedics and the critical care and high acuity team were called to the Brisbane facility, which has been open since 2019, at 4:21pm.

She was then transported to the Royal Brisbane and Women’s Hospital in a critical condition.

‘Workplace health and safety visited the site and are continuing their inquiries into the incident,’ a Queensland WorkSafe spokesperson confirmed.

iFly’s website states that the customer’s safety is their main concern, stating their wind tunnel’s unique design ‘allows you to safely enjoy your flight session’.

While safety is a priority for iFly, the waiver that every customer must sign states that indoor skydiving is an ‘inherently dangerous activity involving strenuous physical exertion’.

‘Among the risk I and/or my child will be exposed are the risks of bodily injury and death.’

Anyone from three to 103 years-old is able to use the facilities as long as they weigh less than 136kg.

Daily Mail Australia has reached out to iFly for comment. 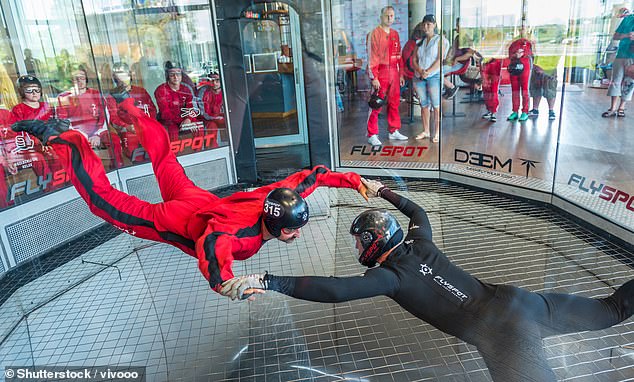 iFly allow anyone aged between three and 103 years-old to participate in indoor skydiving as long as they weigh less than 136kg, stating that safety is a ‘primary concern’ (pictured, stock)