A woman who claimed an older man sitting opposite her on a flight to the Gold Coast was secretly filming her has turned her camera on him and posted the confrontation online.

In the clip she posted to TikTok, Anueta Madison-Vanderbuilt, a Melbourne mother and tanning business owner, asserts herself by demanding the man deletes his video.

Then in a passionate run-down of the incident later on her Instagram, Ms Madison- Vanderbuilt explained why people must confront ‘creeps’ being inappropriate.

‘If you see something, say something to heir face and make them scared to ever do this again,’ she said.

It was a case of enough is enough for the woman.

‘In the past I have been followed to my car, I’ve been followed around a shopping centre and someone even sent me a video of my location, so I am sick of this kind of behaviour and I wanted to call it out.’

‘Many women are made to feel uncomfortable in different ways throughout their lives.’

The man Anueta Madison-Vanberbuilt alleges filmed her during a flight to Queensland, pictured responding as she ordered him to delete his video 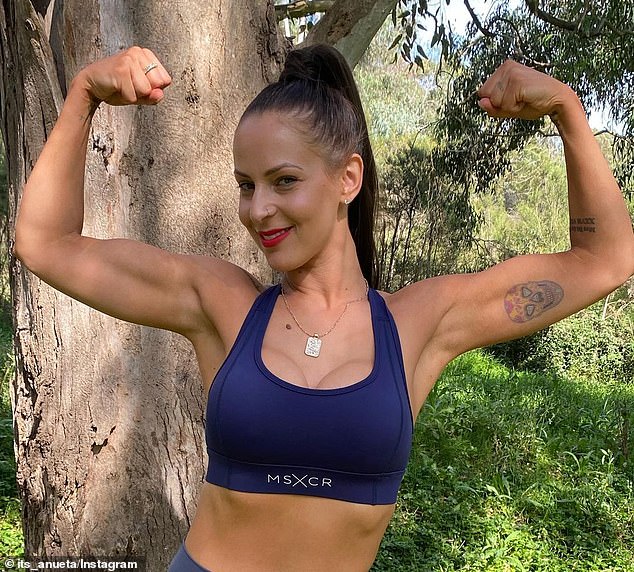 ‘If you see something, say something to heir face and make them scared to ever do this again,’ Anueta Madison-Vilderbuilt’s advice to anyone who catches out a creep

Ms Madison-Vanderbuilt said however that police claimed they were unable to arrest and charge the man as he did not assault her.

The reason police said they would not charge the man was, she said, that ‘he did not film me in a bathroom, or up my dress and it was not of a private body part.’

‘They said it was a grey area of the law and that technically it wasn’t sexual harassment or sexual assault.’

In her video shot, on a flight from Melbourne to the Gold Coast, Ms Madison-Vanderbuilt, can be heard calmly but assertively confronting the man, ordering him to delete his video and prove that he has done so.

She posted the clip on her TikTok profile with a caption: ‘This creep on a flight was secretly recording me for 10 minutes and I caught him’.

Her video description reads: ‘If you think this is OK, you’re part of the problem! AFP got involved and thanked me for standing up to him yelling it on a crowded flight!! #notok.’

‘Excuse me, I’m going to give you one chance to delete it, or I’m going to call police when I get off the plane,’ Ms Madison-Vanderbuilt said in the clip. 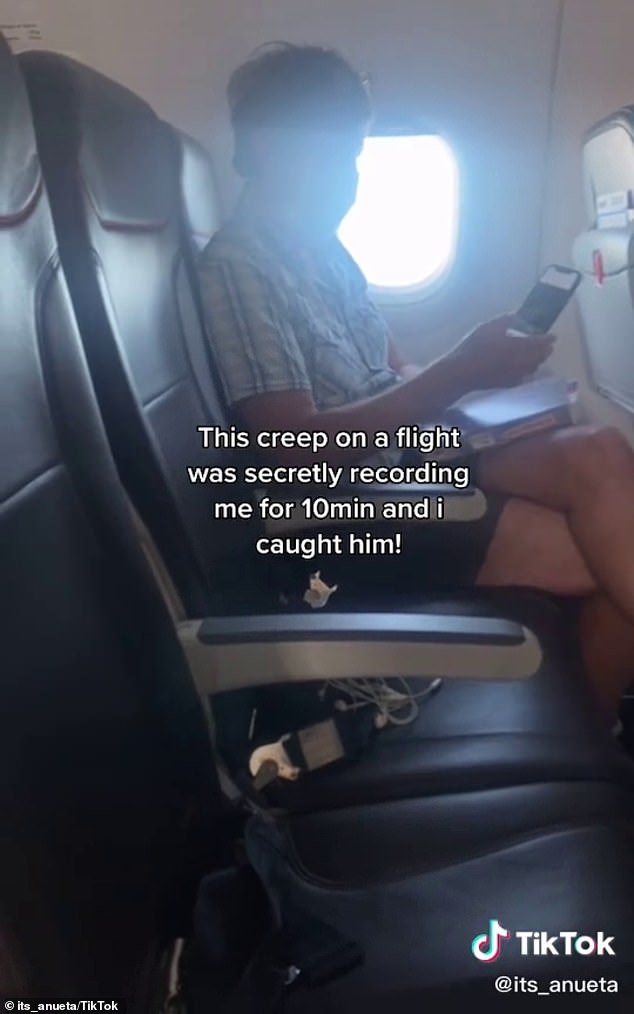 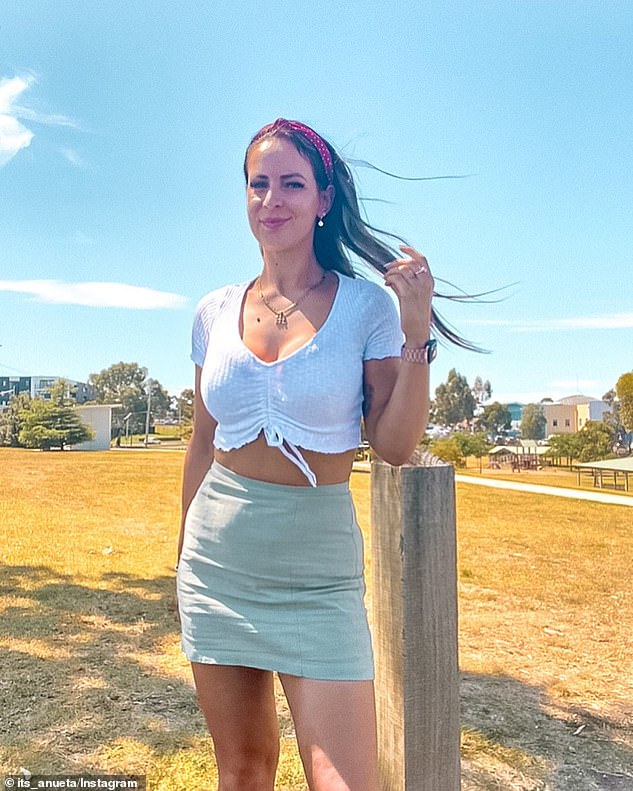 ‘I could feel it in my stomach, women get it, men you won’t understand. You get this gut feeling and you know something’s not right’ she said of the man sitting opposite her on a flight to Queensland

‘It was for 10 seconds, it wasn’t for the whole time,’ he says defending himself.

‘Delete it,’ she orders him. ‘Now go to your deleted folder. Find it and delete it. Show me.’

Later on Instagram, a clearly still shaken Ms Madison-Vanderbuilt elaborated, posting: ‘There is a MASSIVE difference between choosing what someone posts online compared to someone secretly filming you!’

‘I’ve composed myself to be able to go over what happened,’ she said in the Instagram video about the incident.

‘Towards the end of the flight I could see he was holding his phone on his lap, so quite low down. He was holding it so that the camera was facing me.’

‘That’s not how you hold a phone [I thought], I looked at it a couple of times, this went on for about 10 minutes. I could feel it in my stomach, women get it, men you won’t understand.’

‘You get this gut feeling and you know something’s not right. I wrote in my notes and showed it to the guy next to me, ‘the guy in the aisle is recording me, can you see?”

‘He looked and he said ‘that’s f***ing disgusting. He saw it too. He said ‘that’s gross, I can’t believe that actually happens’. I’m like ‘yeah welcome to being a woman. This happens regularly’.

She realised that the man deleting his video was ‘not enough’.

‘He’s doing it so brazenly, he’s done it to others before and he’s gonna do it again.’

At that point she told the air hostess and said ‘That man has been recording me, I’m not ok with it, I want to report it.’

Passengers were asked to remain seated because of the incident, she claimed.

Ms Madison-Vanderbuilt says she then stood up and announced to the still-seated passengers: ‘Would anyone here be OK with this man, this stranger recording you, without consent?’

‘He’s doing it to be a creep, he’s doing something shady. Everyone said ‘no’.’

‘It doesn’t matter if [he was filming for] one second, you’re doing something secretly, deceitfully, without consent, demeaning me and invading my privacy – and you’re hiding it,’ she says she told the man.

Ms Madison-Vanderbuilt claimed the air hostess asked her to delete her video of the man filming, but she ignored the instruction.

‘Not in 2021, we are not doing this anymore, we are standing up for ourselves now,’ she said. 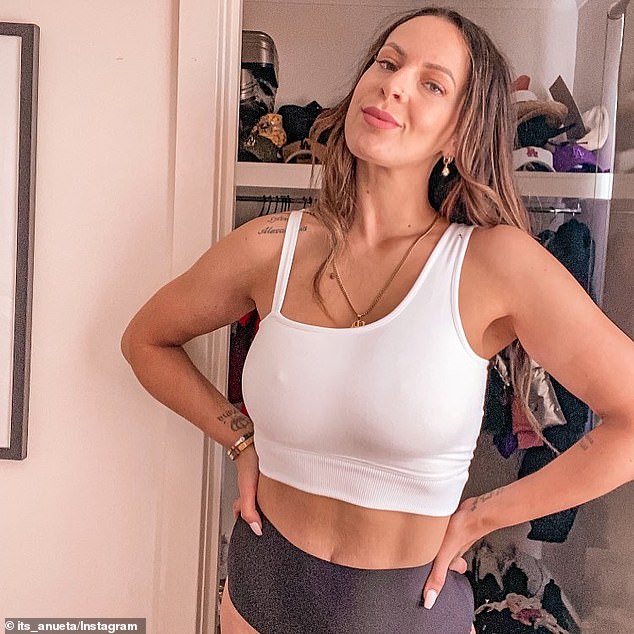 Anueta Madison-Vanderbuilt says none of her fellow passengers on the flight said a word to the man, though other women supported her

‘If someone you know has admitted to doing the wrong thing, say something,’ she urged. ‘Say you’re a f***ing d***head, call them out.’

‘What if he’s going to do that to younger girls, your sister, your aunt, your mother, your daughter.’

She admitted that some people in TikTok had defended the man in the video, but she was unrepepentant.

‘People might defend him and say it’s about what the woman is wearing but that’s victim-blaming.

‘When a woman posts photos or videos online of themselves in a bikini they consent and that is the difference. People who follow women and sneakily shoot secret videos and photos, that is just wrong.’

Ms Madison-Vanderbuilt said no men on the plane stood up for her, although several woman supported her and congratulated her for speaking up.

She said police escorted her off the plane and were ‘kind’ to her after the incident.

‘Shout out to Queensland police, you guys were amazing.’

‘I know he gets away with it, but at least it scares him enough not to want to do it again.’

Queensland Police told Daily Mail Australia: ‘Anything that occurs on a flight would be an AFP matter.’