A young woman who downed a bottle of wine and prescription pills every night has revealed how she turned her life around to coach others.

Gold Coast mum-of-two Renee Claire Hargraves, 32, was addicted to painkillers, alcohol and shopping for years but the ‘functioning alcoholic’ managed to hide her dependency from co-workers, friends and family.

‘I had quite a bit of trauma in my childhood. I experienced sexual abuse and was longing for love,’ Renee Claire told Daily Mail Australia.

‘I had love around but I created a story in my head I wasn’t enough.’

Gold Coast mum-of-two Renee Claire Hargraves has revealed how she turned her life. The 32-year-old was addicted to painkillers, alcohol and shopping for years but the ‘functioning alcoholic’ managed to hide her dependency from co-workers, friends and family

Renee Claire said she started to mix alcohol with pharmaceutical medication ‘to numb the pain of not being enough’ when she was in her early 20s.

Having a bottle of wine and one or two Panadeine Forte tablets each night quickly became an addiction for Renee Claire, who is originally from Auckland.

Renee Claire was 24 years old when she met her now-husband at the beginning of 2012 and after three months together, she fell pregnant.

The pregnancy was an initial ‘catalyst’ to change as she was forced to stop using the substances while carrying.

‘When my baby came. It didn’t make me feel content or happy. I still had the longing, not feeling I was enough,’ Renee Claire explained.

Her daughter and husband quickly developed a great relationship and Renee Claire began to fall back into her old habits.

Left: Renee Claire, who mixed alcohol with pharmaceutical medication ‘to numb the pain of not being enough’, is pictured in January 2012, months before she fell pregnant with her daughter. Right: She is pictured after seeking help and coming to peace with herself

A compulsive shopper, Renee Claire also racked up a debt with her shopping addiction.

‘In the moment, there was a sense of euphoria [while shopping],’ she said.

‘For about an hour it would make me great but then the feelings of not being worthy or not being enough would come back.

Renee Claire is pictured in 2010. In her early 20s she began to notice her addictive behaviour with binge drinking

‘I continued this cycle until I fell pregnant with my second.’

Renee Claire did not drink again during pregnancy but but continued to take prescribed pain relief for her neck.

She would only seek help about her problem with addiction and inability to feel worthy when her eldest daughter began to ‘act out’.

Renee Claire was 28 years old and her daughter was just four.

‘Looking at my behaviour, I knew I needed to do something to help,’ she said.

‘As much as I didn’t want to recreate my childhood, I was doing the same [to my daughter]. It was learnt power.’

Renee Claire sought the assistance of a coach and despite the hardships, she hasn’t looked back since.

‘It was the most petrifying, confronting thing I’ve done,’ she said.

‘That was the start of my journey, I cleared out a lot of negative emotions from my past. I came to an inner-peace in myself with love and success.

‘I realised it was all about me not being enough, not being worthy. For 28 years I thought I was not good enough.’

Speaking to the past four years, Renee Claire said she feels ‘amazing’. 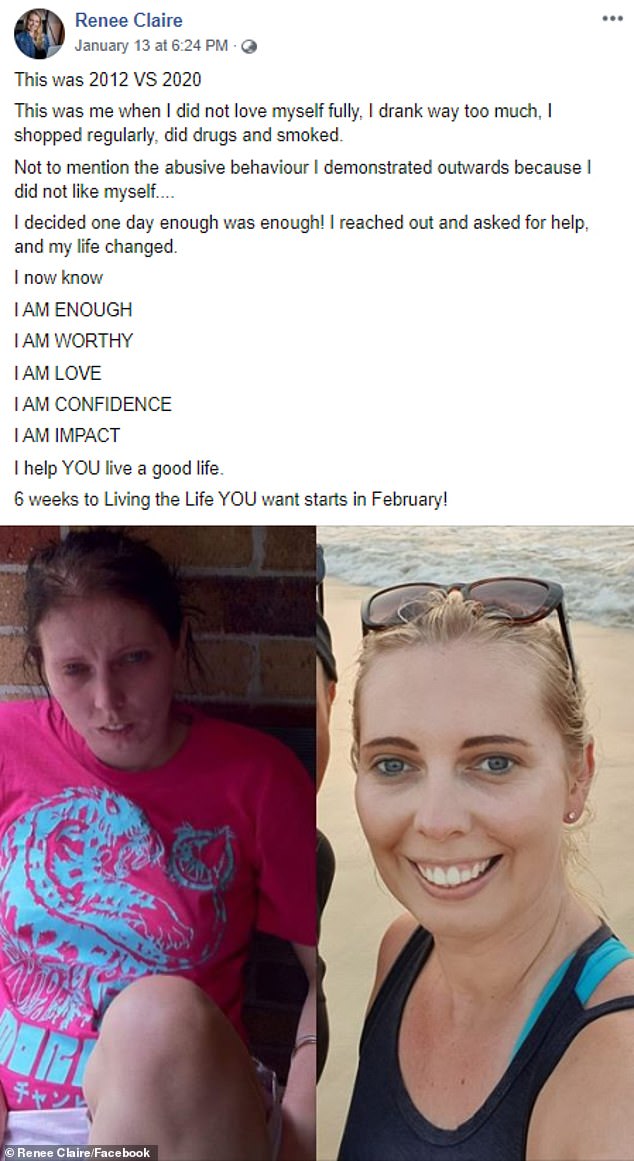 ‘After my coaching experience, I realised I wanted to do the same for other people,’ she said.

Renee Claire said she learnt she could be happy and enjoy the little things in life – instead of numbing her feelings.

The transformation coach is quick to admit that life is full of highs and lows and things won’t always be ‘peachy’.

‘If we didn’t have dark, we wouldn’t have the light,’ she said.

She hopes sharing her story will encourage others to find hope in their individual situations.

‘I don’t experience those thoughts anymore.’ 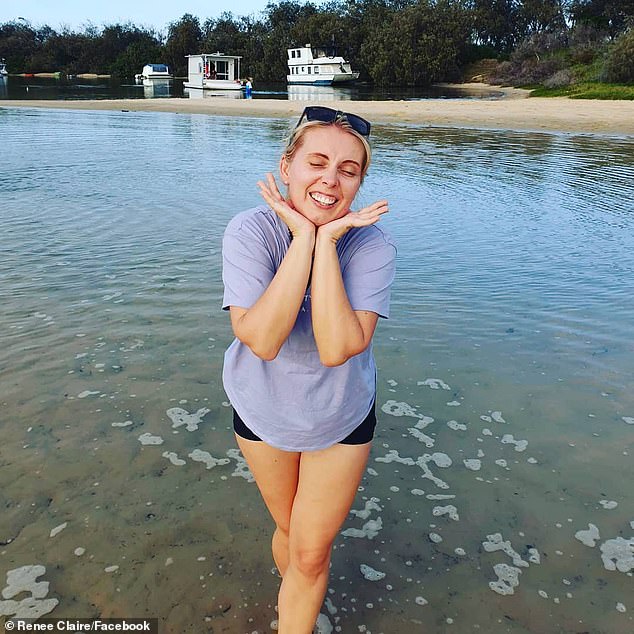