Woman almost lost her sight after SCRATCHING HER NOSE

A mother-of-two almost died after scratching her nose caused a life-threatening infection that ravaged her face.

Anita Clark, 50, was terrified when her face doubled in size and a huge blister developed across both cheeks.

The community nurse from Clayton, Manchester, had no idea what was wrong until doctors noticed a small scratch inside one of her nostrils.

Ms Clark had developed cellulitis – a life-threatening infection that can cause sepsis or kidney damage if not treated quickly.

She said: ‘I was terrified, at times I thought that my face would never go back to normal. I thought I’d end up with skin of an alligator, because the cellulitis made my cheeks really crusty.’ 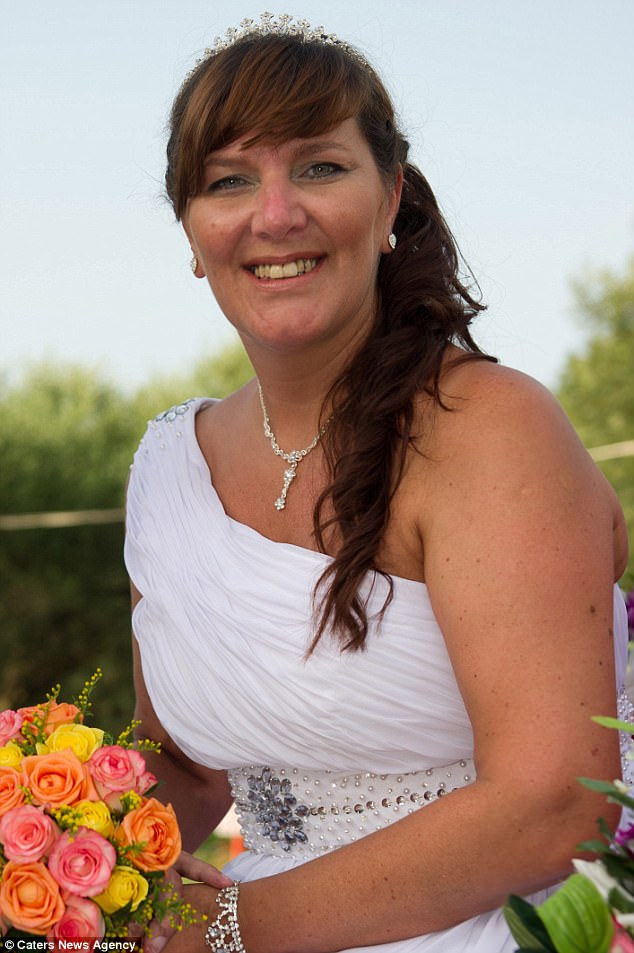 Cellulitis is a skin infection that can be deadly if not treated quickly enough.

It most commonly causes swelling in the fingers, feet and lower legs.

If untreated, the infection can spread to the blood, muscles and bones.

Cellulitis occurs when a bacterial infection enters the deep layers of the skin via a tear.

Signs of a serious infection include a hot temperature, fast heartbeat, purple patches on the skin, accelerated breathing, confusion and unconsciousness.

‘I thought I’d end up with skin of an alligator’

After developing severe facial swelling, Ms Clark was admitted to hospital where she was immediately given antibiotics for cellulitis.

She said: ‘They told me that my cellulitis may have been caused by make-up brushes, but I very highly doubt that as I only ever use a blusher brush on my cheeks sometimes.

‘It was then that they noticed a tiny scratch on the inside of my nostril.

‘They think that either bacteria from when I was in the garden had got in to the cut, or just sweat bacteria, had caused cellulitis in my face.’

It took five weeks for her face to go back to normal, with doctors worried it had damaged her eyes.

Ms Clark said: ‘I was terrified, at times I thought that my face would never go back to normal.

‘I thought I’d end up with skin of an alligator, because the cellulitis made my cheeks really crusty.

‘I was in hospital for nine days taking regular antibiotics to try and get the fluid out of my face.

‘Because my skin was so full of fluid it started oozing out of my skin.

She said: ‘It gradually started to crust over and smell appallingly, but luckily that didn’t last for too long.

‘I had X-rays and eye scans to make sure that the cellulitis wasn’t going to be fatal, or cause me to go blind or anything.

‘Fortunately it didn’t reach my eyes enough to make me go blind, so I thank my blessings for that.’ 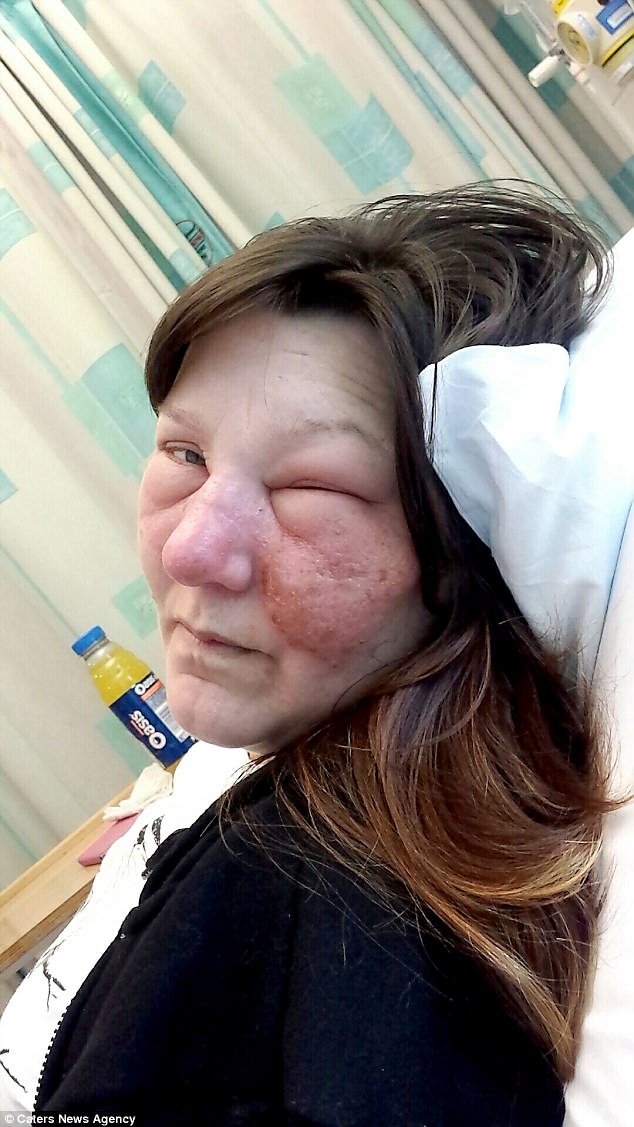 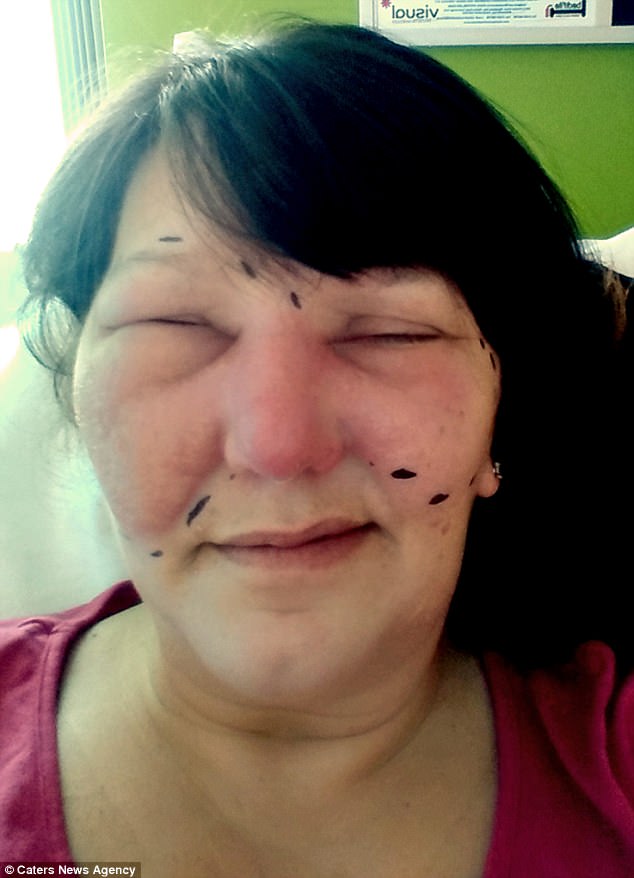 Doctors believe bacteria from the garden got in to the cut, causing her facial swelling 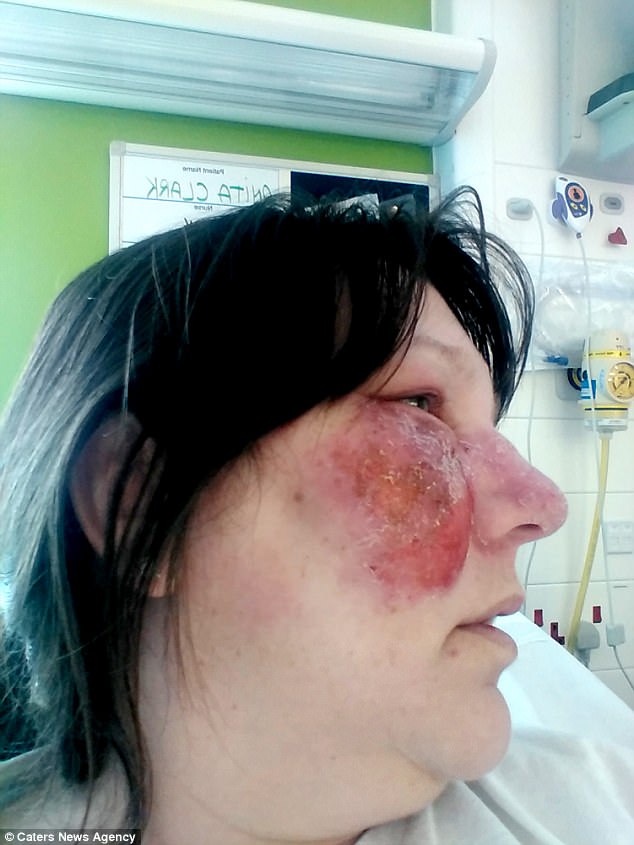 It took five weeks for her face to calm down; doctors worried her eyes were damaged 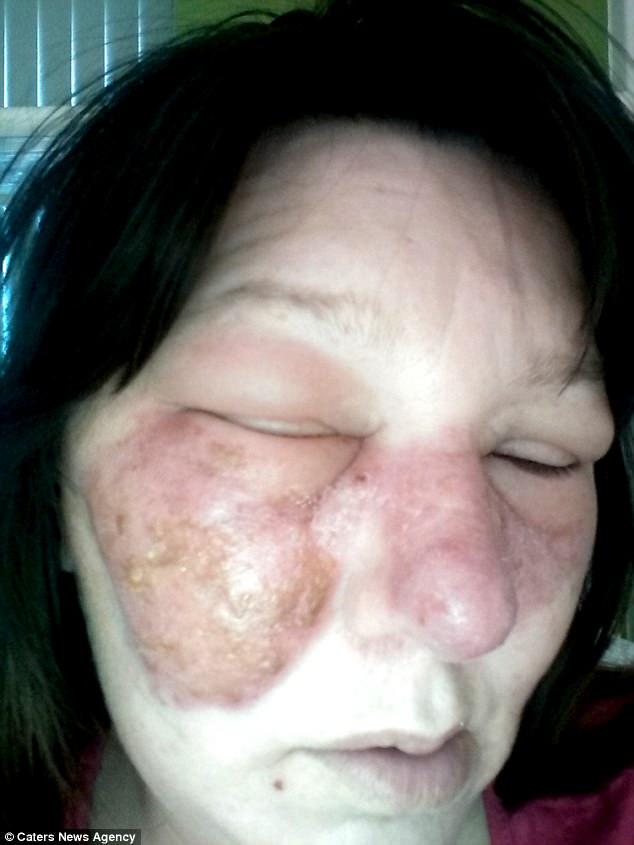 Ms Clark began to feel achy after gardening, but put it down to the activity alone 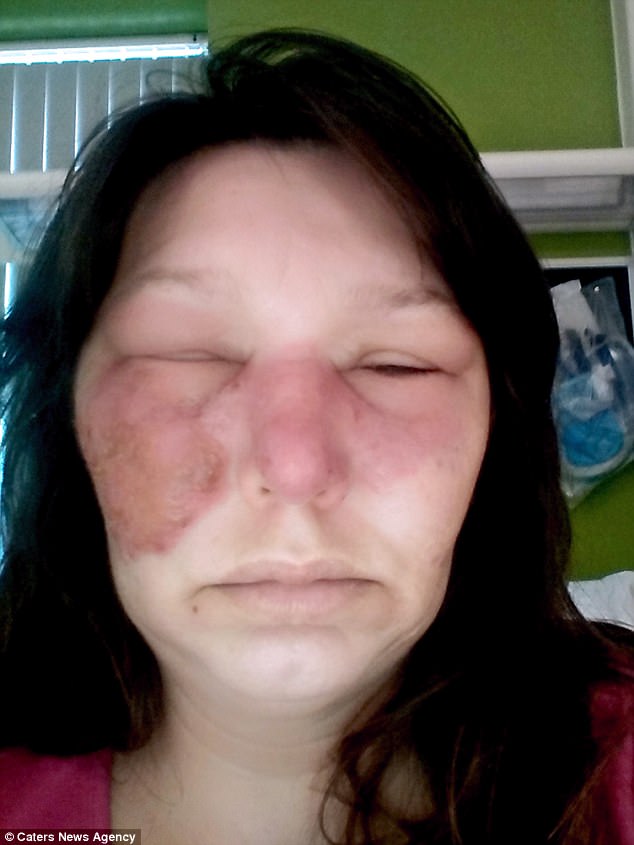 She woke the next day feeling hot and suffering from a headache, but able to go to work

‘I was flooding with sweat and couldn’t breathe properly’

She said: ‘After I’d done the gardening, I strangely started to feel run down and achy, but I thought that was from the gardening.

‘So I decided to have an early night to make sure that I felt better for work in the morning.

‘When I woke up I started to fell hot and had a headache, but I went into work anyway because I did feel well enough to get up and do stuff.

‘When I went into work my colleague looked at me and said “Anita, your nose looks like Rudolph!”

She said: ‘When I looked in the mirror I realised it was really red at the tip, and it felt a bit hot but I didn’t think anything of it.

‘So I continued my working day until I started to feel hot and clammy, and not really very well at all.

‘I told my boss and she sent me home right away and told me to just go straight to bed, so I did.

‘But when I woke up when my husband, Dave, got in from work, I was flooding with sweat, really clammy and couldn’t breathe properly. 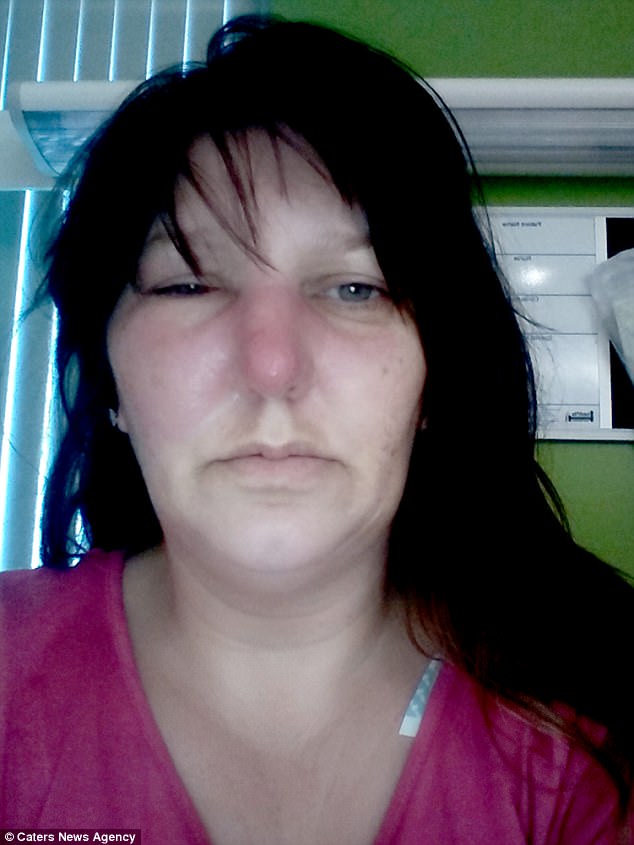 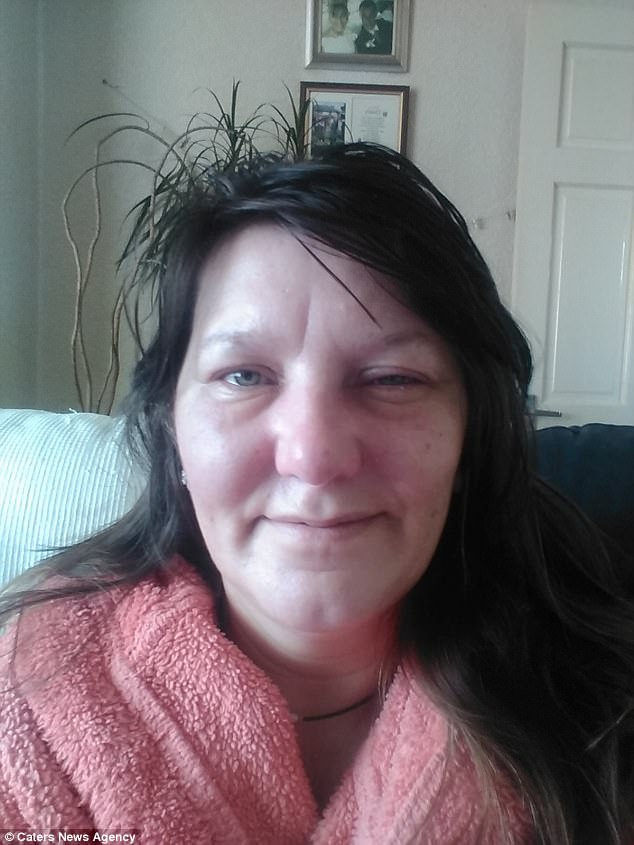 Aside from the tip of her nose being red, Ms Clark also felt clammy and hot 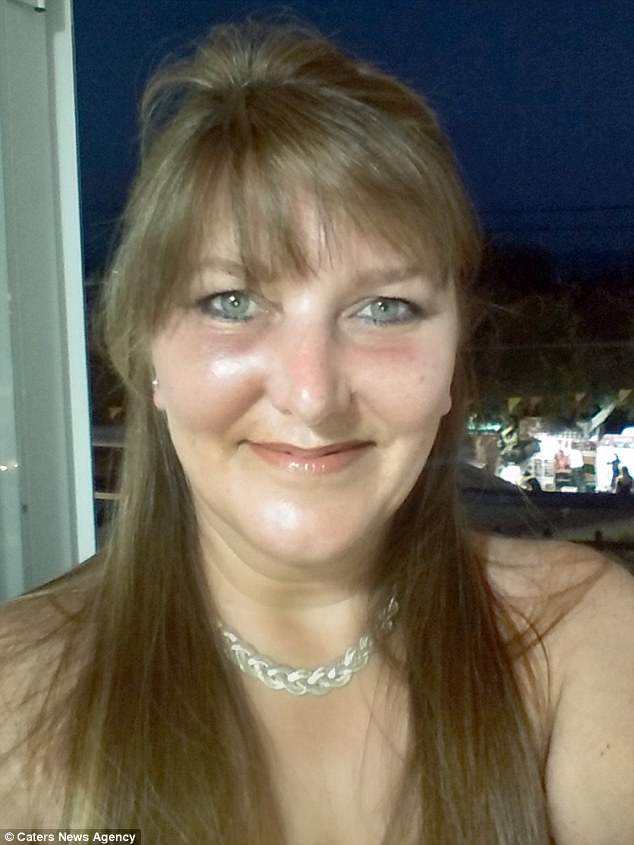 When her husband Dave came home, Ms Clark was unable to breathe properly