An Oregon woman has been arrested for the 39th time after she reportedly stole an ambulance and led police on a high speed chase.

When looking into Christy Lynn Woods’ most recent arrest, media outlets came across her extensive rap sheet, which details some 114 charges – the majority of them for disorderly conduct, trespassing, criminal mischief, harassment and violating parole.

Fourteen of those charges are related to the 37-year-old Roseburg resident’s ambulance joyride last Sunday, according to jail records obtained by DailyMail.com.

Woods is wearing a cheeky smile in her newest mug shot, one of at least 34 she’s posed for in her 39 recorded brushes with Douglas County law enforcement since 2011. 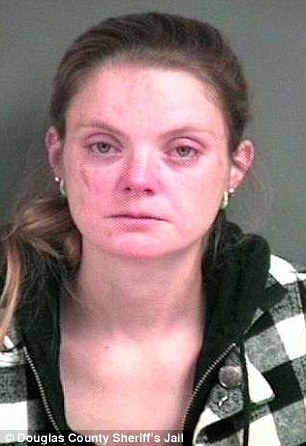 Christy Lynn Woods has been charged with stealing an ambulance in Roseburg, Oregon. Jail records indicate the 37-year-old has been arrested 39 times in Oregon since 2011. Woods is pictured left in her most recent mugshot last week and right in the first one in November 2011

According to an arrest affidavit, Woods hopped into the unattended emergency vehicle last Sunday while paramedics were busy performing CPR on an unconscious woman.

She then proceeded to speed through downtown Roseburg and jump onto Interstate 5, where police chased her for nearly 30 miles at up to 85 miles per hour.

The Oregonian reports that at one point during the chase, Woods struck a police vehicle that was traveling in front of her, totaling the car and leaving State Police Sgt Ken Terry with minor injuries.

Authorities eventually brought the ambulance to a halt with a police spike strip, at which point Woods was taken into custody.

The affidavit details several unprovoked musings by Woods as she was taken to Douglas County Corrections center, including: ‘Why would they leave it unlocked?’ and ‘F**k, I’m going to prison.’

Woods was ultimately booked on 14 charges, including assault, interfering with paramedics, criminal mischief and reckless driving.

According to Douglas County public data, Woods was arrested for the first time on December 6, 2011, although there are no charges listed under that record.

About a year and a half later she was arrested in June 2013 on a ‘menacing’ charge, and she finished out that year with a string of five arrests over a three week period from November 22 to December 10.

A total of 16 charges, most for disorderly conduct and criminal trespassing, are listed under those arrests.

Woods was arrested again four times during the first half of 2014, including for an alleged robbery in April of that year.

The next arrest recorded is listed as a July 2015 parole violation. Woods does not appear to have been arrested any additional times that year.

However, she got back on law enforcement’s radar early in 2016 with two arrests in Janaury, one of them for alleged methamphetamine possession, followed by arrests in May, June, July, August, November and December.

In total, there are nine arrests and 25 charges recorded for 2016.

Woods appears to have been arrested 10 more times in 2017, including once for driving while intoxicated. Nine of those arrests included parole violation charges.

As noted earlier, Woods has racked up an impressive eight arrests already this year, and in February was convicted of second-degree disorderly conduct after she attacked bar patrons with an alcohol bottle before screaming slurs at and kicking a police officer.

Her latest arrest following the ambulance incident will likely carry her strictest sentence yet.

A specific court date for those charges has not been set as of one week after Woods being booked.