Woman asks if she can get away with a summery white maxi dress that’s a ‘bit see through’ for her work Christmas party…but would YOU wear it?

A British mother has sparked an online debate, asking if she can wear a see-through white cotton dress to her Christmas party.

Taking to British Parenting Forum Mumsnet, the woman posted a photo of the dress, asking for opinions if she should wear it with a slip underneath.

While some said she should wear whatever she felt comfortable in, others felt the dress was completely inappropriate for a winter function.

It comes after another Mumsnet user asked if the Zara bustier she’d chosen for her work party was suitable, with some claiming it was too revealing.

A woman has sparked an online debate, asking if she can wear a see-through white cotton dress to her Christmas party

In the original post, the woman wrote: ‘I have a white/cream cotton maxi dress that I’m wondering could I wear to my work Christmas party.

‘It’s a bit see-through so I would wear a slip underneath. Could I make this more festive and suitable? Normal attire would be glitzy sequinned glam dresses.’

She added that the photo was not of her but taken from a website.

It is thought the dress is from Tailor’s Lover website, costing €138. 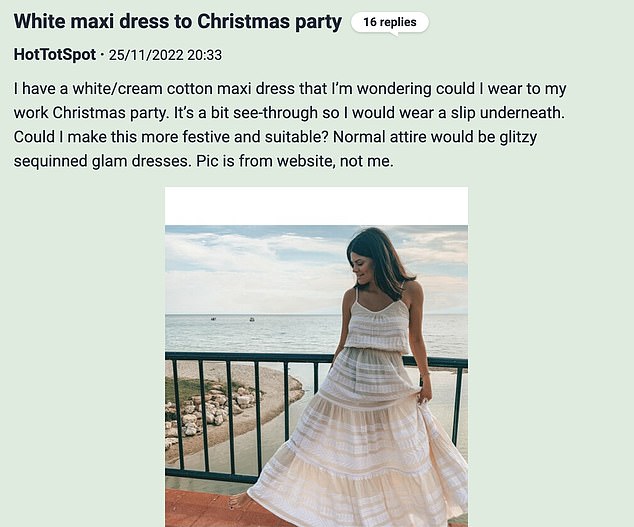 Taking to British Parenting Forum Mumsnet , the woman posted a photo of the dress, asking for opinions if she should wear it with a slip underneath

The post got a host of replies, with most saying the dress was not suitable for a winter event.

Some said she should look on vintage clothes website Vinted to get herself something else, while others said she needed to make it more festive.

One wrote: ‘I wouldn’t wear that. Long white dress you can only get away with in summer or at your own wedding.’

Many other users were unsure about the summery dress, with some saying they thought she would be ‘freezing’ in the outfit

While a third wrote: ‘It feels like a summer dress to me, not sure how you’d made it feel festive.’

And a fourth advised the poster to find something more suitable on Vinted instead.

Someone else joked that they would spill mulled wine down in a matter of minutes.

The woman who originally posted the message then realised most people were against her idea.

Most of the posters were against the summery dress, with the original poster taking the criticism lightly

Keeping the matter light-hearted, she wrote: ‘Lol [laugh out loud]. That sounds like a resounding no. It’s definitely summery but was hoping somehow it could be made suitable. Back to the drawing board I guess.’

But some people did say that the dress might work if it was accessorised correctly.

One wrote the poster could possibly get away with it if they added gold jewellery, biker boots and a leather jacket.

While a second wrote: ‘If you like it and feel comfy, wear it. These days anything goes.’

If you liked this article…

Mumsnet is where many women go for solutions, and recently one woman asked if it was rude not to RSVP to a party invite.

Elsewhere, a partygoer asked if her see-through lace bodysuit was appropriate attire for a work do

Another asked if she should get a divorce, given that she had never really fancied her husband of 17 years.