A woman was forced to bite a camel’s testicles to escape after it sat on her when she ran into its enclosure chasing her loose dog.

The incident happened at a Tiger Truck Stop, known for exhibiting exotic animals in Louisiana, when her pooch ran into the camel enclosure.

The dog, which was deaf, was unable to hear his owner’s calls at the Tiger Truck Stop in Grosse Tete on I-10, a few miles west of Baton Rouge, so the woman chased after it.

The dog ended up running under a double barbed wire pen belonging to Casper the camel. 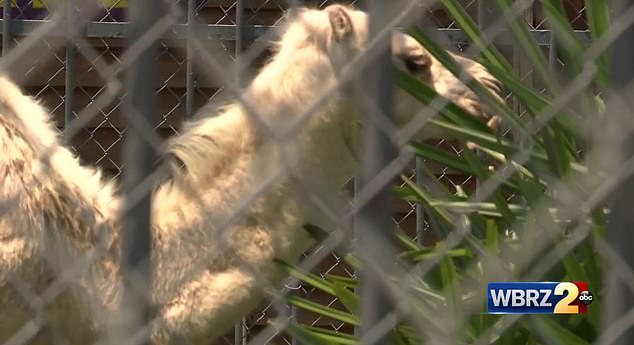 The 18-month old camel was spooked by the wandering dog and woman chasing it, so the camel chased the woman, eventually pinning her against the wall of a building 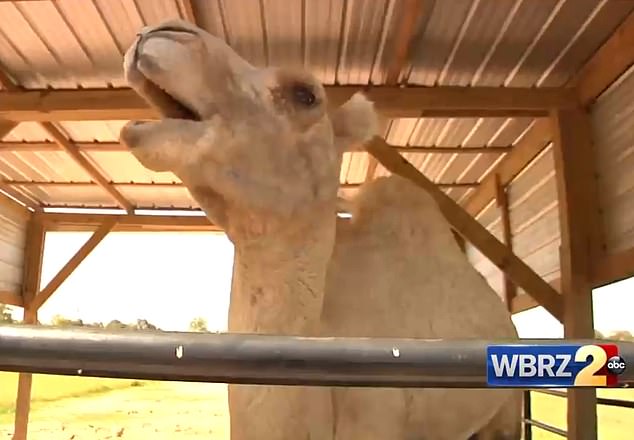 The camel, named Caspar, then sat on top of the woman, nearly crushing her

As the lady tried to catch her dog, she disturbed the camel who decided to sit down on top of her ‘very nearly crushing her’, according to WBRZ. Camels can weigh up to 1,100 pounds.

The woman had to do whatever she could to get out from under the animal, a male dromedary, and so she bit on the animal’s testicles.

She was taken to a local hospital, but her condition is unknown, WAFB reports.

No serious injuries to the camel were reported. 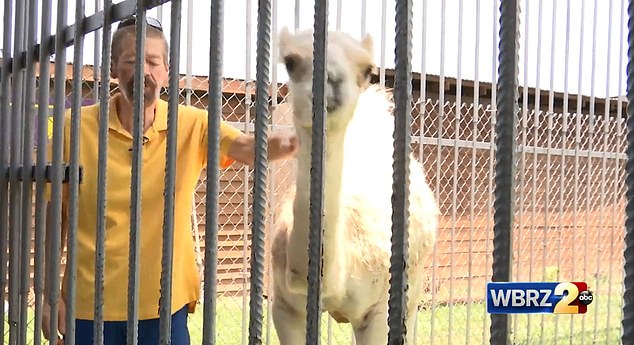 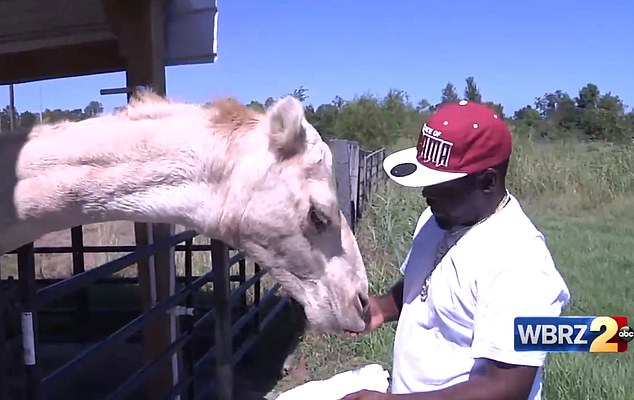 Police say the dog was simply chasing treats that the woman’s husband had thrown into the camel’s pen.

The camel is 18-months-old has lived at the truck stop since last summer replacing Tony the tiger who had to be been put down in October 2017 because of kidney failure and other health issues.

A coati, a member of the raccoon family native to South and Central America, also lives at the truck stop, along with a miniature horse and a baby kangaroo. 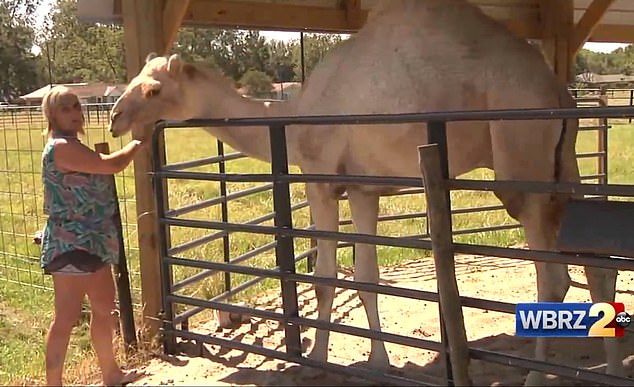 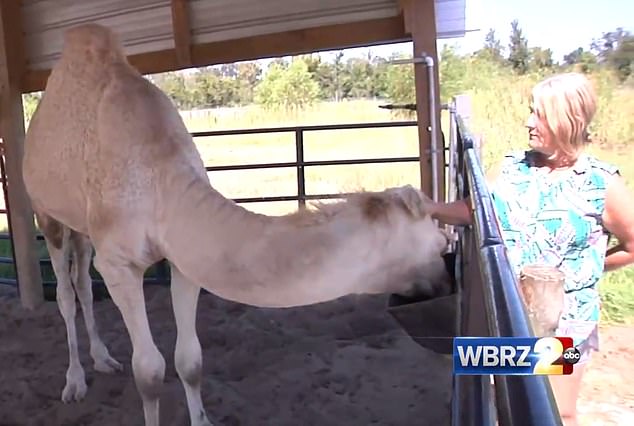 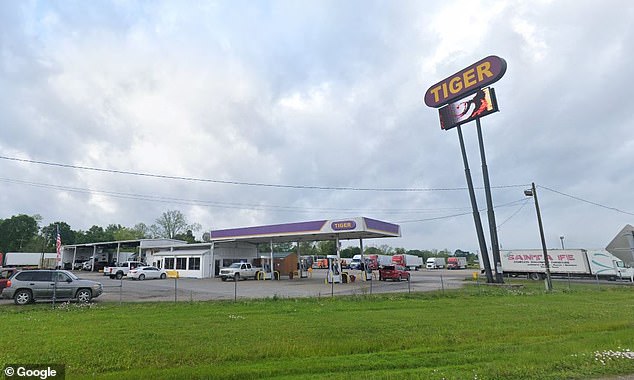 The camel enclosure exists at a truck stop on I-10 just a few miles west of Baton Rouge, LA 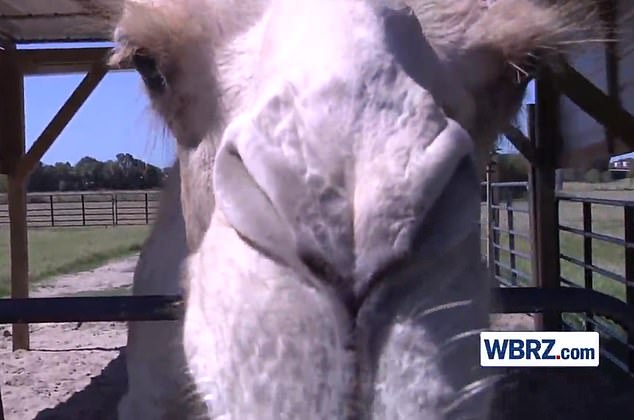 ‘In fact, the husband and wife stated before that we’ve been here before and we’ve never had any problems,’ the Deputy said.

‘The camel did nothing wrong,’ Hamilton continued. ‘The couple were aggressive. The camel was just doing its normal routine.’

The couple was cited for trespassing and violating area leash laws.

Authorities didn’t find reasons to hold the truck stop liable for their injuries because the camel was enclosed and signs warning visitors to stay out are posted every 10 feet along the fence.

The woman was sent to hospital after the encounter, however it is not known how serious her injuries were as a result of the encounter. 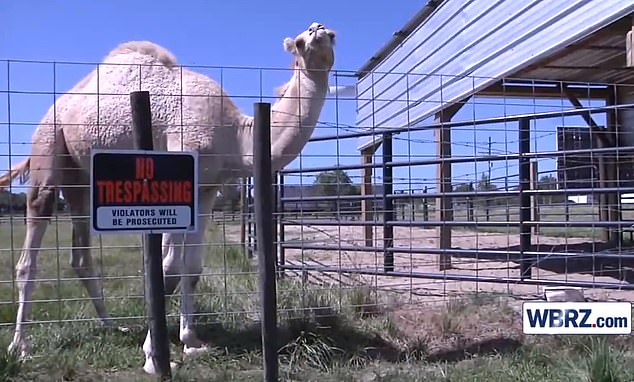 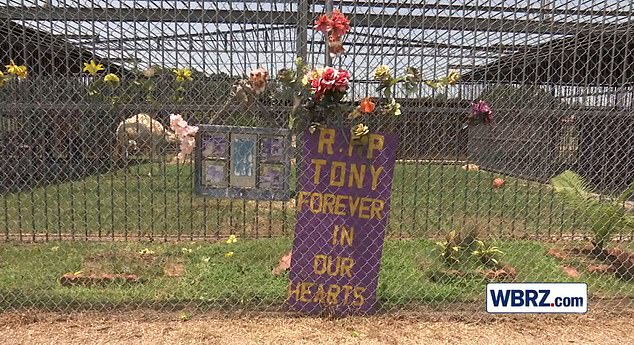 The camel came to the enclosure in 2018 a few years after a tiger, called Tony, passed away