‘Gutless moron’: Woman claims sick pet owner ordered his dog to attack a harmless swan at the beach and then laughed while watching on

A woman claims a man ordered his dog to attack a harmless swan before he stood  back and watched the violent incident unfold while laughing along with a friend.

The alleged incident is understood to have occurred near to the Front Beach in Sorrento, a coastal town southeast of Melbourne, around 10am on Sunday.

The dog owner was accompanied by a male friend who he allegedly told to ‘watch this’ before taking his dog off its lead and telling him to ‘sick em’.

Pictured: Man (left) wanted for questioning after a man ordered his dog to attack a swan

The witness said the dog then proceeded to approach a group of around 20 black swans who were swimming in the shallows before the dog ‘grabbed one’ swan.

‘[T]he dog grabbed a swan and began to shake it vigorously. I screamed and swore at him to call dog off, he laughed,’ the witness said.

‘My husband ran into the water to try and release swan from dog’s mouth, [the] guy just stood on beach.

The witness, who labelled the two men as ‘gutless morons’ said the swan was injured and had to be carried out of the water. 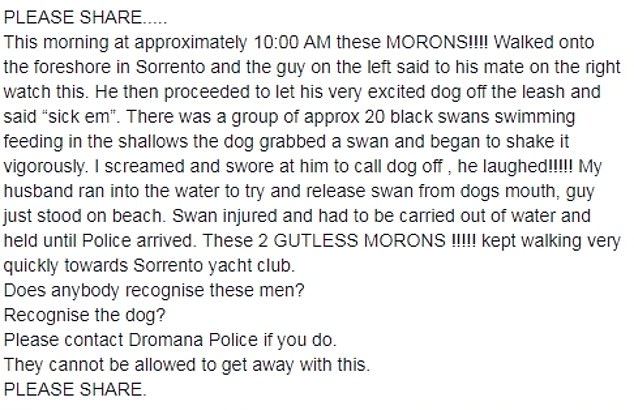 She said she and her husband then kept hold of the swan until the police arrived at the scene.

She said the two men continued to walk ‘very quickly’ in the direction of the Sorrento yacht club.

The woman, who shared an image of the two men facing away from the camera alongside the dog, urged anyone who recognised the men or the dog to get in touch with the police.

‘They cannot be allowed to get away with this,’ she added.

Since the witness, who asked not to be named, shared the post many social media users have condemned the two men for their ‘disgusting’ actions. 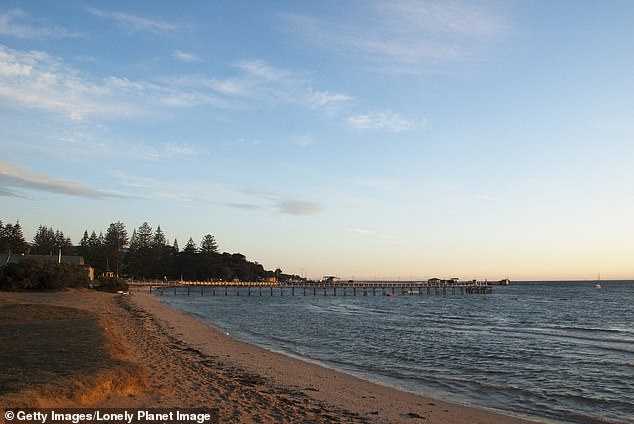 The alleged incident is understood to have occurred near to the Front Beach in Sorrento (pictured), a coastal town southeast of Melbourne, around 10am on Sunday

‘That is disgusting. I hope they get the biggest fine plus community service. They can clean all the beach. Idiots,’ one person wrote.

‘Yes they look and sound like total morons and I hope they get caught disgusting that they would train their dog to do that idiots,’ another said.

A third wrote: ‘They do not deserve to own a dog!! That kind of behaviour they are basically setting the poor pup up to be euthanised… some people just lack brains!!’

‘I’m Speechless! It’s [s]uch a shame you didn’t get their faces. Hopefully they will be recognised,’ another added.

The dog owner is believed to be Caucasian and was last seen wearing an off-white jacket and a pair of shorts.

Police have released an image of a man wanted for questioning over the incident.

Anyone with information on the incident should contact Rosebud police station on 03 5986 0444.