Woman confesses her ‘evil’ act of revenge for passengers who recline their seats too far back on a plane: ‘This is brutal’

A young woman has revealed her icy response to fellow travellers who recline their seats when flying, sparking a huge debate over plane etiquette.

Speaking to Nova radio hosts Fitzy and Wippa the ‘evil’ frequent flyer explained that ‘inconsiderate’ passengers in the row in front of her are dealt with swiftly if they decide to recline ‘all the way back’.

‘You know the air con vents in the top, so you can swivel them around I swivel it right on their face and put it on full blast,’ she said to applause from the radio hosts.

‘That’s a belter and they can’t complain,’ an impressed Ryan ‘Fitzy’ Fitzgerald said, while Michael ‘Wippa’ Wipfli said she had ‘outdone herself’.

But it appears not everyone was impressed by her disdain for people who choose to recline their seats.

A huge debate broke out between fans of the radio program with people split somewhat evenly between two camps: Those who believe reclining breaks the unwritten laws of the sky, and people defending their rights to use all of the functions they paid for.

‘It’s rude to recline the plane chair that I paid for??? This is news to me,’ one woman, a school teacher commented.

‘There is no way I am going  to travel my whole flight in the upright position,’ another woman said.

‘How is reclining ones seat inconsiderate? When you pay for the seat, you pay for all its features,’ said another.

Is it rude to recline on a flight?

Some doubled down and said they would love the extra aircon.

‘I paid for my seat I’ll recline my chair (soo much more comfortable) and would absolutely love you to share some of that air con with me buddy,’ one man said.

‘The aircon on planes suck. I would happily take a second one,’ another woman said.

‘Who doesn’t recline their chair all the way back when they fly. I do it as soon as I take off, I’m going to be comfortable, air con no problem,’ added another woman.

But some are so against recliners they think airlines should remove the function from seats permanently with one woman complaining she recently had a man ‘in her space for 14 hours’.

‘The feature is there from a time where we had room and you would barely noticed it was reclined, but nowadays there isn’t room for it in most flights,’ one woman declared.

‘I don’t recline my seat, but then again I am not selfish,’ one woman added.

‘I just hold the seat so they think it is jammed and don’t try to recline it again,’ said another. 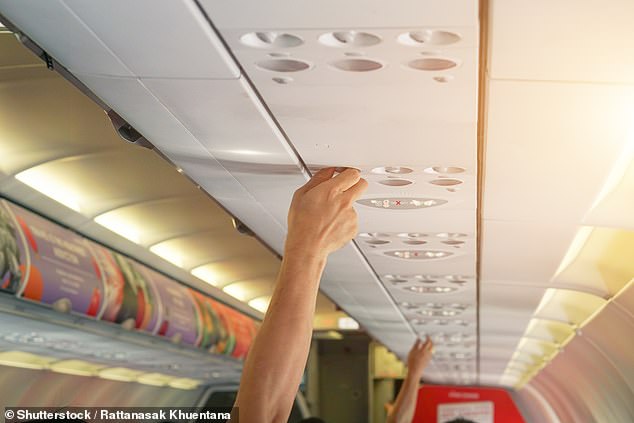 The woman said she swivels the aircon toward the recliner, and makes it as cold as possible (stock image)

Most people agreed there are some measures ‘recliners’ should take before slipping their chairs back.

These include checking to make sure the person behind them hasn’t got their face all the way forward and putting them up for meals.

‘I had the most rude people in front of my partner and I on an international flight where it was dinner time and the guy in front was asked to move his chair forward so my partner could eat to which his response was “nah I don’t give an F, the guy behind me can eat off his knees for all I care”,’ proving not all people follow the ‘meal rule’.