A young woman who developed severe acne due to the synthetic hormone in the birth control pill has said it is important to educate girls, aged 15 and 16, on the side effects of the pill before taking it.

Kyrie Green, 24, from Leicestershire, first started developing acne in October 2019 when she switched to a new contraceptive pill, but it got even worse over lockdown.

In an effort to calm her symptoms, Kyrie stopped taking the pill but the damage was done and she had to turned to her GP who immediately referred her to a dermatologist.

Kyrie Green, 24, first developed severe acne in October 2019 when she switched to a new contraceptive pill but it got even worse over lockdown. (pictured, before, in July 2019)

She revealed that the skin expert was so shocked by the severity of Kyrie’s skin problems that she ‘grimaced’ when she took off her face mask.

Kyrie, who works as an account executive, said: ‘I thought my acne would subside, but I was very wrong. Over the next few months, the acne got more severe and more painful.

‘When I sent the images in [to the GP], she called me very soon after and said it was clearly serious and I was immediately referred to a dermatologist.

‘The dermatologist grimaced when I took my mask off, which knocked my self-esteem quite a bit.

‘Going from having completely acne-free skin to a severe breakout was a major shift in my life and it did affect my confidence.

‘It was really hard – I never thought I would suffer with acne in the way that I did.’ 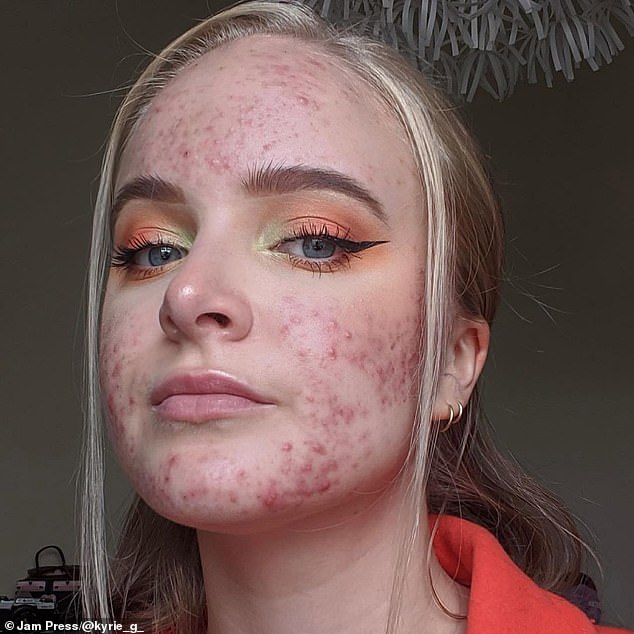 The account executive, from Leicestershire, saw multiple dermatologists, as well as her GP, who said that the synthetic hormone in the pill she had been taking had been slowly causing the acne. (pictured in September 2020, after taking new contraceptive pill) 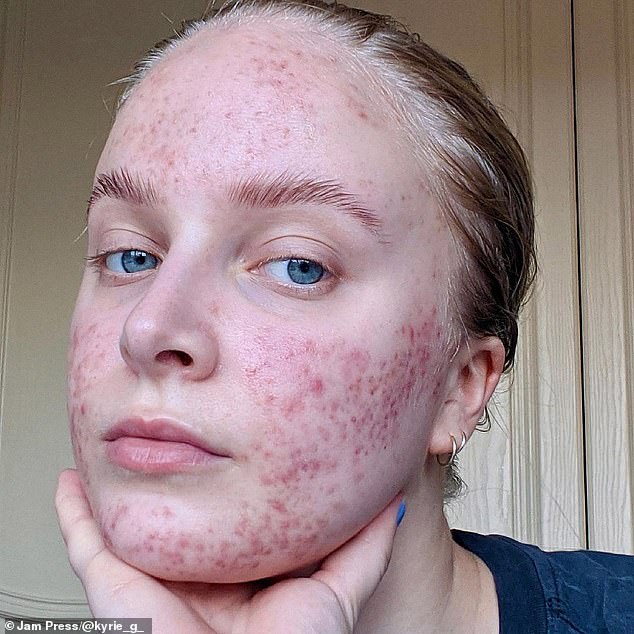 Kyrie found it difficult to go out in public and adjust to having acne, having only ever had minimal breakouts in the past.

Luckily, lockdown meant that she couldn’t go out as much – with face masks hiding the majority of her face when she did.

But inside, Kyrie’s confidence faltered and the young woman was so stressed about the skin that she couldn’t think about anything else.

She said: ‘It was really difficult and I experienced very low lows. I thought all anyone was thinking and talking about was my skin, which was obviously not true at all but I still felt so insecure.

‘At the early stage of my breakout I avoided looking in mirrors – my confidence levels were very low.

‘I only took pictures of my skin to document the progress – or decline – of its health. 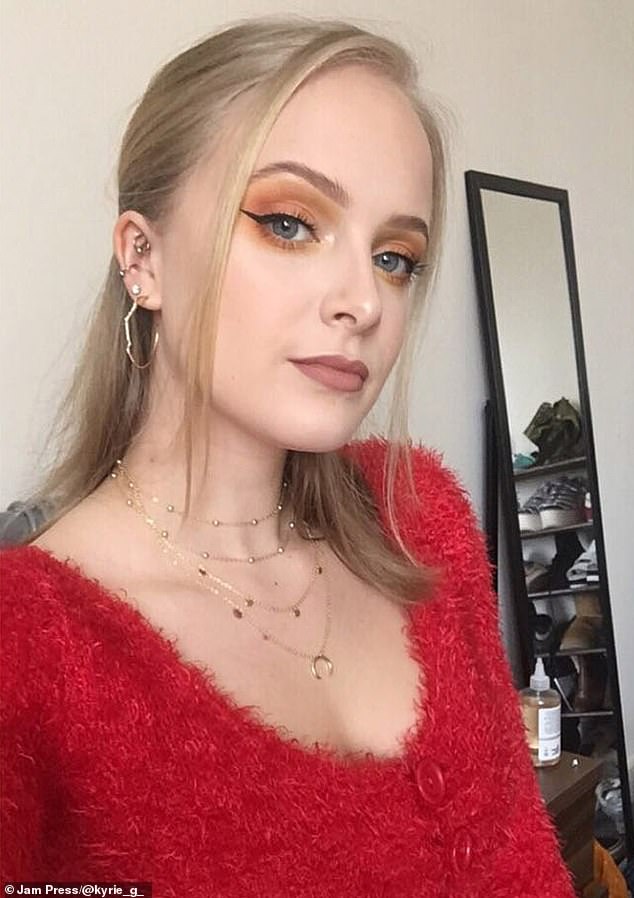 Kyrie said her confidence faltered and she found it difficult to go out in public and adjust to having acne, having only ever had minimal breakouts in the past (pictured with acne-free skin before her ordeal) 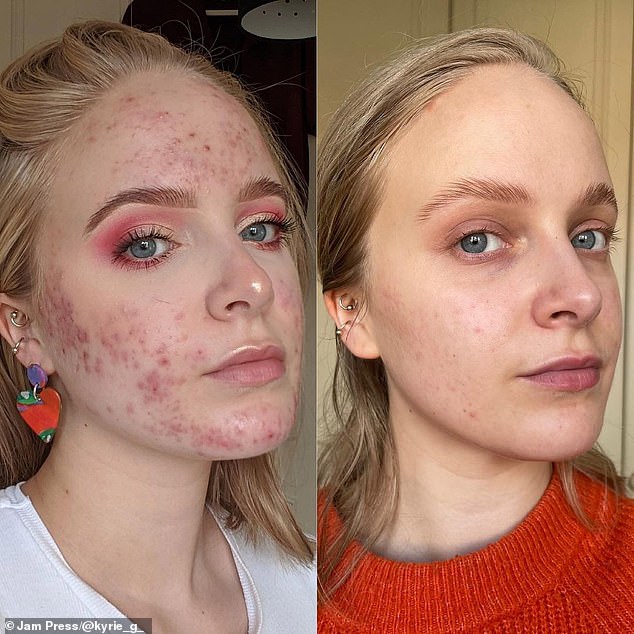 Kyrie has documented her journey to clearer skin on Instagram, which has seen a dramatic improvement thanks to a four-month course of antibiotics

‘At one time I had put on makeup because I was going to a job interview, and it was my first time wearing foundation in a few months. I caught myself in the mirror and burst into tears.’

Kyrie saw multiple dermatologists, as well as her GP, who said that the synthetic hormone in the pill she had been taking for two years prior had been slowly causing the acne.

Her GP prescribed a four-month course of antibiotics, which saw a dramatic improvement in Kyrie’s symptoms.

Although she wouldn’t warn people to avoid the contraceptive pill completely, Kyrie thinks it is important that people – especially teenage girls – are educated on the side effects before they start taking it.

‘The pill has negatively impacted so many people’s lives and I think there is a certain duty of care when it comes to telling people what they could experience,’ she said. 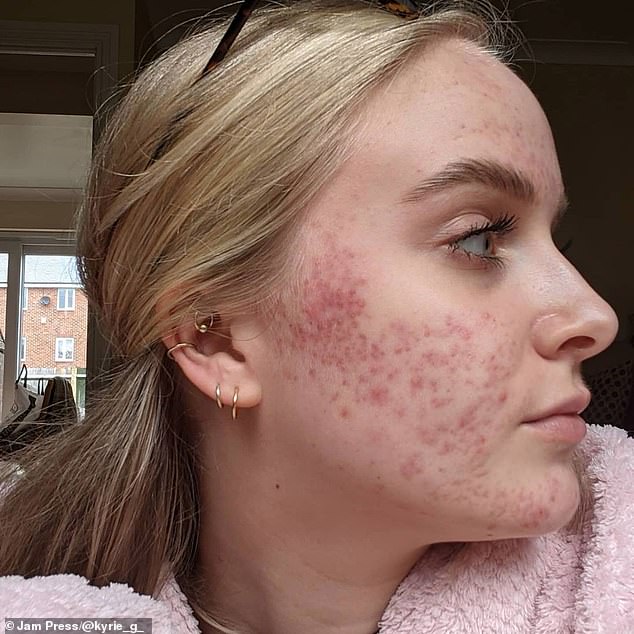 She said she now thinks it’s important to educate young girls on the side effects of taking the pill, before they go on contraception aged 15 or 16, saying doctors have a ‘duty of care’ after it has negatively impacted so many people’s lives

‘Obviously there are side effects listed on the packet but when a person is 15 or 16 years old, I think we should try harder to educate them.

‘I will never go back on hormonal contraception because it doesn’t suit me.

‘I feel so free not being on them anymore – I feel like myself for the first time in years.’

Her skin has now cleared up a lot, with Kyrie only suffering with more severe breakouts during periods of ovulation and menstruation – but they are nothing compared to her previous struggle.

Kyrie has bravely documented her experience of living with acne and the journey to clearer skin on Instagram, but says having clear skin is ‘not the secret to happiness’.

Instead, she praises the online community of fellow acne sufferers for helping her accept her skin and coming to terms with it.

Kyrie said: ‘I found that my happiness was not just about the condition of my skin.

‘It was only one layer and in the end, when my face started to heal, that alone didn’t make me a happier person. 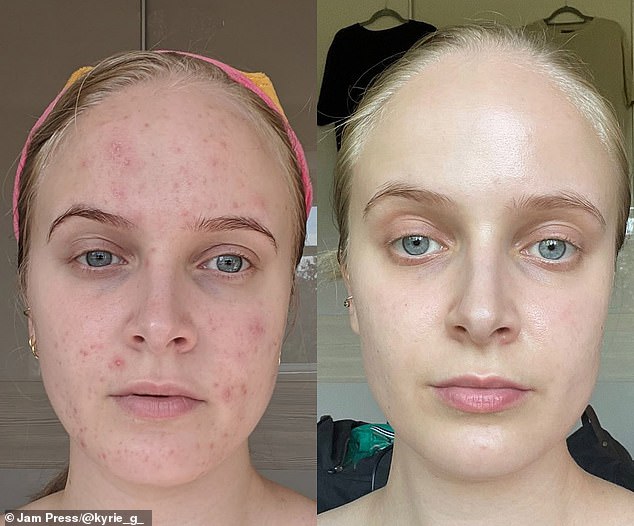 Kyrie has since stopped taking hormonal contraception, saying she will never go back on it again. Pictured, left, July 2020, and right, July 2021 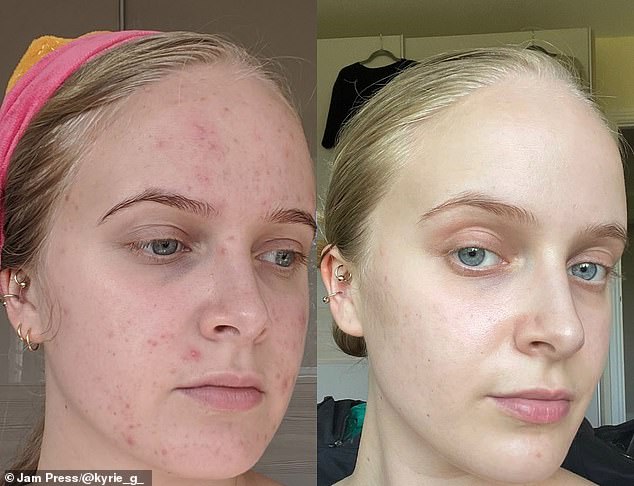 Kyrie now only suffers with more severe breakouts during periods of ovulation and menstruation – but they are nothing compared to her previous struggle. Pictured, left, July 2020, and right, July 2021

‘What made me happy throughout my journey was the support I received on Instagram, through the acne community and through loved ones.

‘Having that support system there helped me to accept my skin for whatever it was.

‘After I started to post about my acne on Instagram, I accepted my skin and realised that acne is normal.’

Kyrie has now shared her experiences and photos in the hopes that it will help others who are suffering from acne.

‘It’s so easy to get caught up in thinking that clear skin is the answer to all of your problems but I promise you it’s not,’ she wrote in a post which has since gone viral.

After sharing her experiences and photos in the hopes that it will help others who are suffering from acne, she has received a huge amount of support online

‘Acne-free skin is not a long-term happiness solution.

‘I’m here to tell you that your emotions are valid and happiness isn’t something that happens overnight.’

The Instagram post has received more than 6,500 likes so far, leaving social media users touched – with many thanking Kyrie for sharing her experience.

One person said: ‘I’m glad I found your account! You have helped me on my journey to accepting my skin!’

‘Your skin condition doesn’t = happiness,’ another person agreed. [sic] Another viewer said: ‘You helped me love my acne.’

‘Girl you are amazing we love the acne positivity,’ someone else agreed.

WHAT IS CYSTIC ACNE?

Cystic acne – the most severe form of the skin condition – occurs when oil and dead skin cells build up deep within hair follicles.

If these become infected, it can cause boil-like blemishes.

Spots occur when a pore in the skin gets clogged, usually with dead skin cells. If bacteria enters the pore, it can become red and swollen.

Cystic acne takes place when this infection goes deep into the skin, creating tender bumps that are full of pus.

If the cyst bursts, it can spread the infection, causing more break outs.

Sufferers are usually in their teens or early 20s, but can be as young as eight or as old as 50. Cystic acne is more common in men.

The face, chest, back, upper arms and should are most often affected.

Cystic acne’s exact cause is unclear but is thought to involve the hormones androgen.

Androgen increases during puberty and can result in pores getting clogged.

Over-the-counter medication that can ease milder acne often have no effect on cystic forms.

A dermatologist may prescribe oral antibiotics that control bacteria and lower inflammation.

Creams and gels containing retionoid, a form of vitamin A, can also help to unclog pores.

Birth-control pills may also help women to regulate their hormones.

It is important to seek treatment to prevent scarring.

Acne sufferers should not pick at their blemishes as this may push the infection deeper and make it spread.

Sufferers should also try and relax due to stress causing the body to release more hormones.

Another person added: ‘Wowww the progress is unbelievable.’ [sic]

‘You are beautiful,’ commented one fan.

Someone else said: ‘I find it so courageous of you to share your thoughts and feelings and your experience with pictures!

‘I can imagine how many young people you have encouraged and given hope by showing that they are not alone in this type of pain/suffering even emotionally.’

Acne affects more than 80% of people in the UK but severe acne is more rare. Up to 14% of people seek medical help for the condition.