This is the terrifying moment a woman escaped death by inches after she dodged a collapsed roof.

Footage taken on Saturday at the height of Storm Eunice shows two women walking into a house.

They get in unscathed as winds whip around them but a third woman walks to the door and is forced to duck as the roof collapses, almost hitting her.

A huge amount of debris from the roof plummets to the ground as she runs into the safety of the house.

Then, the wind blows the pile of debris from the roof and the camera shows that it is blocking the entrance to the house.

The footage, captured on a doorbell camera and posted on TikTok ends with a man examining the damage.

Storm Eunice caused havoc across the country over the weekend, with 122mph winds recorded at the Needles on the Isle of Wight on Friday. 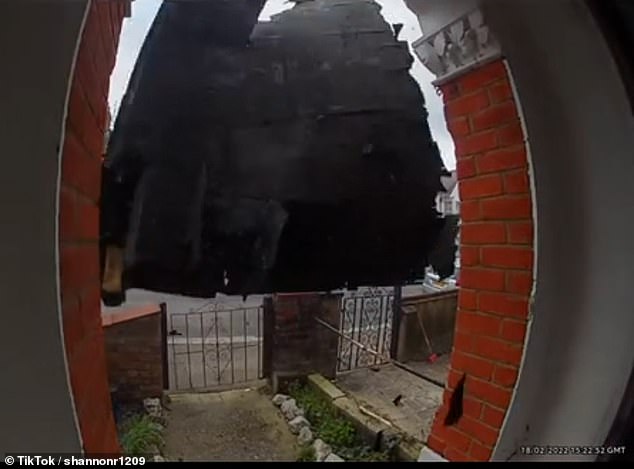 Hundreds of buildings and houses were destroyed and many people were left without power because of the storm.

In Essex, a 400-year-old oak tree uprooted and destroyed a family home.

A part of the roof and multiple windows of the house collapsed under the weight of the tree.

Now, the country is in the grip of Storm Franklin, which has seen heavy rainfall, flood warnings and further travel chaos sweep the nation.

In Essex, a 400-year-old oak tree uprooted and destroyed a family home (pictured)