A woman has been dubbed the ‘new Central Park Karen’ after she was filmed claiming two black women had beaten her for refusing to return their phone charger.

The unidentified woman was filmed smirking while on the phone to cops in New York’s Central Park earlier this week after being confronted by vlogger Alana Lambert and her friend, both of whom are black.

Lambert said her portable charger fell from her friend’s CitiBike as they vlogged in the famed beauty spot, but that the mystery woman then picked it up and refused to return it without proof it was theirs.

Lambert filmed what happened next with the woman telling a 911 dispatcher that the two black women were ‘touching’, ‘threatening’ and ‘beating’ her when the footage shows this not to be the case.

She also tells the black women ‘yes I am’ when they ask if she is racist.

It is now a crime to make a false or hate-based 911 call in the state of New York after lawmakers passed a series of criminal justice and police reform laws last summer.

This law was triggered by the original ‘Central Park Karen’ case. That saw white woman Amy Cooper called 911 on a black bird watcher in Central Park to falsely claim he had threatened her life when he had just asked her to put her dog on a leash.

A woman has been dubbed the ‘new Central Park Karen’ after she was caught on camera (above) finding two black women’s phone charger on the ground, refusing to give it back, and then smirking as she calls 911 to falsely claim they’re threatening and beating her

She made that call on May 25 2020 – the same day George Floyd was murdered by Minneapolis Police Officer Derek Chauvin.

A ‘Karen’ is a nickname given to a white woman acting in an officious or entitled way, often towards people of color, with multiple incidents of such behavior emerging on social media in recent months.

Lambert’s footage, posted on TikTok and YouTube Thursday, begins with a shot of the ‘Karen’ standing holding her bike up with one hand and her cellphone in the other as she speaks into the phone.

‘Can I just have it back please?’ Lambert is heard asking off camera.

Lambert’s friend asks her: ‘Do you have video [of the charger]?’

Lambert replies: ‘I definitely have video with it on but she’s not going to give it back even if I show her.’

She then tells the camera: ‘This lady just stole my charger and won’t give it back.

‘She’s saying that I have to prove it’s mine and she’s calling the cops on me right now.’

The ‘Karen’ is heard on the phone in the background.

‘In Central Park… that they’re going to beat me,’ she says into her phone.

‘She said that were going to beat her!’ Lambert’s friend exclaims off camera.

The 911 dispatcher is heard asking if the ‘Karen’ is in Central Park.

The ‘Karen’ starts wheeling her bike away from the two women then shouts: ‘They’re getting close to me and they’re already touching me.’

The video shows that the two women are not touching her.

‘That’s our property,’ says Lambert. ‘No one’s touching you.’

The ‘Karen’ fires back that ‘it’s not yours either.’ 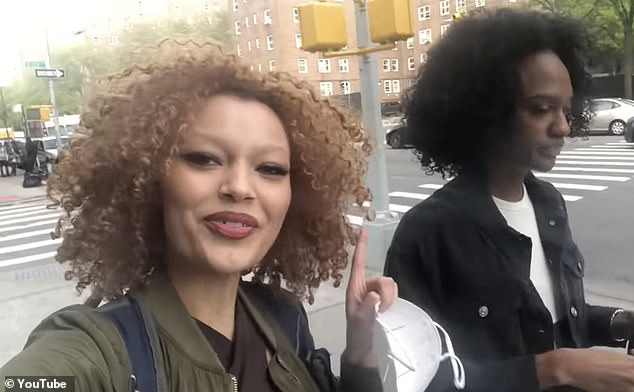 The incident unfolded when Alana Lambert (left) and her friend were vlogging a day out in Central Park, New York City (above). Lambert said her portable charger fell from her friend’s bike and the woman picked it up and wouldn’t give it back until they proved it was theirs

She then falsely tells the dispatcher that the women are threatening to beat her ‘or something’.

‘Ma’am they don’t left me, there are two girls. They are surrounding me and they are threatening me that they are going to beat me or something,’ she says.

She looks up at the two women she accuses at this point as Lambert tells her ‘don’t do that please.’

The ‘Karen’ smirks at her as Lambert’s friend is heard saying: ‘You’re lying. You’re a liar.’

Lambert then asks: ‘Are you racist or something?’

The ‘Karen’ replies: ‘Yes I am. I pick my race over any race, what’s your problem.’

She then wheels her bike away from the women as they follow at a short distance behind pushing their bikes.

Lambert speaks into the camera at this point saying that ‘she just stole my motherf****er charger and told me she’s racist and saying that we’re going to beat her and kill her and stuff.’

The ‘Karen’ is seen in full with one leg of her dark jogger trousers rolled up while the other is down.

She then threatens to break the phone charger and questions who paid for it.

‘These two have come and said that this is theirs, I’m gonna break it,’ she says.

Lambert replies that ‘maybe I have a very good job.’ 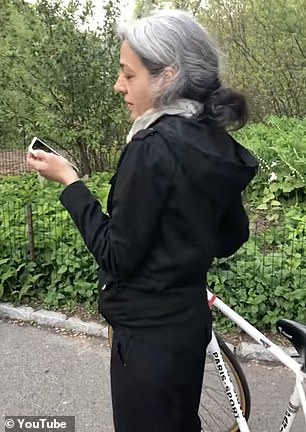 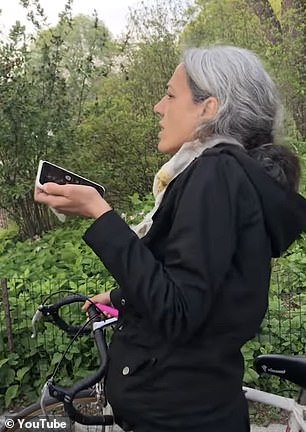 The ‘Karen’ tells a 911 dispatcher that the two black women were ‘touching’, ‘threatening’ and ‘beating’ her. She also tells the black women ‘yes I am’ when they ask if she is racist 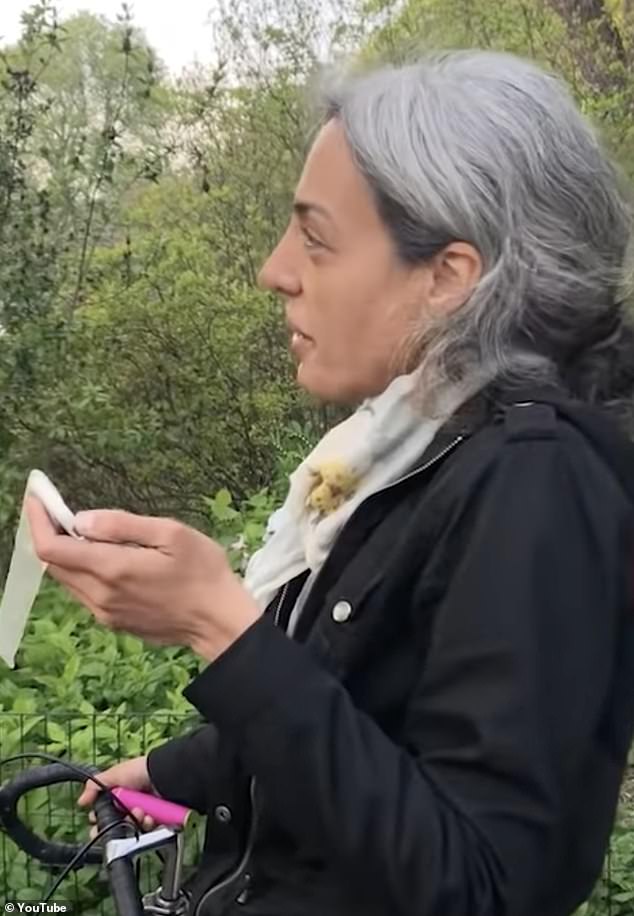 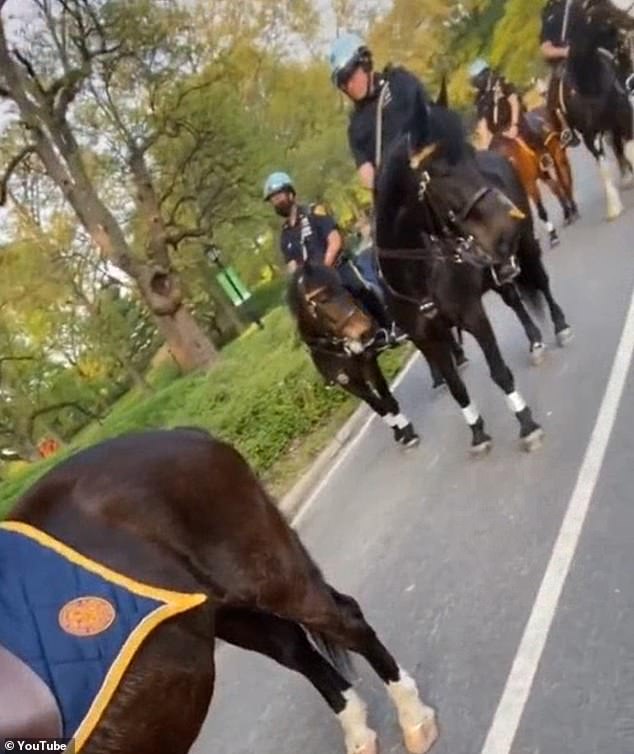 The ‘Karen’ approaches a group of horse-mounted New York City police who are riding through the park. She tells the cops the two black women have been ‘threatening’ and ‘beating’ her. Lambert and her friend get the phone charger back

‘Girl if you go viral trying to be stupid that’s on you,’ Lambert tells her.

At this point, the ‘Karen’ approaches a group of horse-mounted New York City police who are riding through the park.

She tells the cops the two black women have been ‘threatening’ and ‘beating’ her.

‘These two people are coming and threatening me and beating me that this is theirs,’ she tells the cops.

‘I’m not going to give it to them unless they can prove it is theirs.’

An officer asks what it is to which Lambert explains it is her portable phone charger.

The officer asks if Lambert can tell them what brand or any identifying marks so the saga can be solved to which Lambert’s friend replies that they have video of them with it.

‘She says we threatened her and beating her she called the cops,’ says Lambert.

‘We’ve been recording her since she got it.’

The footage cuts to later after the two women have gotten the charger back.

‘I got my s**t back. The police just gave it back,’ Lambert tells the camera. 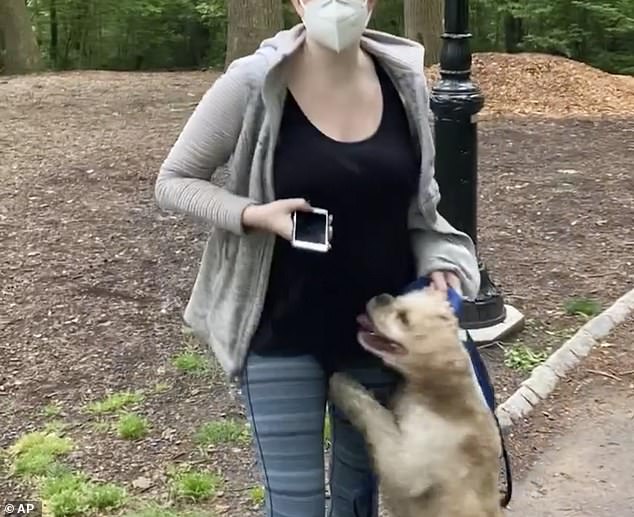 ‘This lady said we just tried to murder her, beat her up or something and then called the motherf****er cops and said that.’

Following the incident, Lambert also films herself getting emotional as she tells how her father gave her the charger before he died from an overdose.

‘I remember him saying I was going to need that charger one day,’ she says, as she breaks down in tears.

Lambert posted the footage on YouTube and on her TikTok.

The video had more than 55,000 views on YouTube within 24 hours of being posted and the TikTok footage had also gone viral.

It is not clear how the NYPD is proceeding with the case. Lambert posted a series of videos on her TikTok showing her reporting the incident to police officers at a local precinct.

The NYPD told DailyMail.com it has no reports on file relating to the incident.

The incident has drawn instant comparison with the infamous case involving Cooper. 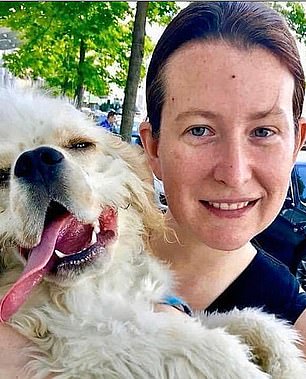 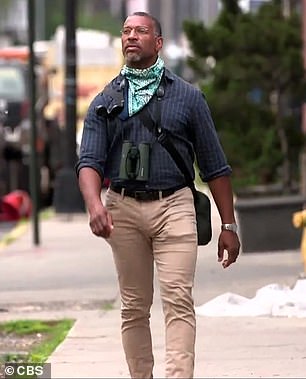 Cooper (left) falsely claimed Christian Cooper (right) had threatened her life when he had just asked her to put her dog on a leash. Following the incident state lawmakers made it a crime to make a false or hate-based 911 call

Cooper, 41, called police on black man Christian Cooper last May 25 after he told her to put a leash on her dog in Central Park.

The woman became hysterical and called 911, claiming he was threatening her life.

He filmed their exchange and put it on social media, with the footage revealing she was fabricating the incident.

‘There’s an African American man, I’m in Central Park, he is recording me and threatening myself and my dog. … Please send the cops immediately!’ Cooper tells the 911 dispatcher in the video that went viral.

Cooper was fired from her Manhattan investment firm job, blasted as ‘racist’ by Mayor Bill de Blasio then was eventually charged with a Class A Misdemeanor or filing a false police report.

The charge was dropped in February with prosecutors saying she had completed five therapy sessions and seemed to have learned a ‘lot’.

This decision sparked outrage with many pointing out that her privilege as a white woman afforded her leniency.

That incident took place the same day George Floyd was murdered by white Minneapolis cop Derek Chauvin, setting off a national reckoning calling for an end to systematic racism.

Cooper’s false 911 call led to a new state law being passed in New York in June – one of many aimed at tackling racism and police brutality in the wake of Black Lives Matter protests.

The law makes it a hate crime for 911 callers to make false accusations based on race, gender or religion.