A woman who let her dog lick peanut butter from her genitals and filmed the vile act for her boyfriend has been fined $500 but will be allowed to keep the pet.

The 25-year-old Queensland woman claimed she had little to no memory of making the videos with the American staffordshire terrier after they were requested by her boyfriend.

Footage of the disturbing act only came to the attention of police after they seized her phone during a raid at her partner’s home for more serious offences.

Kemmis plead guilty to breach of duty of care by inappropriate handling, the Townsville Bulletin reported.

Police prosecutor Acting Senior Constable had asked for the dog to be taken from Kemmis, arguingthe clip ‘grossly offends against morality.’

‘She is not a fit and proper person to be in possession of an animal,’ he said.

Dence solicitor Peter Haarsma said the dog suffered no physical harm and appeared to be well cared for after being handed vet reports.

He also claimed the woman had been ‘dragged through the mud backwards’ following public shaming and losing her full-time job as a manager of a gaming arcade. 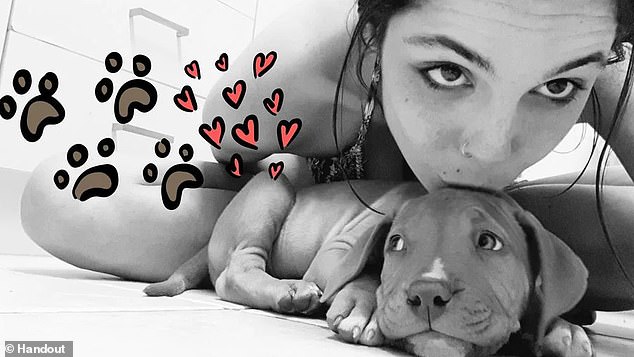 The magistrate fined the woman $500, while recording no conviction and allowed Kemmis to keep the dog

‘There has been serious effects on her personally and financially,’ he said.

‘It has had a horrendous effect on her life.’

The woman is currently unemployed and suffers from an array of mental health issues.

When handing down the fine, Magistrate Jacqueline Payne said she accepted Kemmis was ’embarrassed and remorseful’ and did not record a conviction.

‘There was no harm to the dog physically or, what I would say, psychologically,’ the Magistrate said.