Woman found her family 26 years after being separated

A 32-year-old Chinese woman who was separated from her family at a train station 26 years ago has finally found her father.

‘I am sorry. I didn’t take good care of you,’ cried Xu Qibao, the father, as he tightly held his daughter who went missing at the age of six.

Sadly, Chen Huihui, the daughter, would never be able to meet her mother again. Her mother allegedly died a few years after Chen went missing because ‘she missed her too much’.

Xu Qibiao, left, apologises to his daughter, right, for not taking good care

The pair were reunited on January 22 in Shanghai after Chen uploaded a post to look for her family online, reported Shanghai-based Xinmin Evening News.

Chen Huihui, who is now a mother herself, said she would never forget that fateful day in 1992 which changed her life forever.

They were changing trains in the Shanghai Train Station and Chen’s aunt asked her to wait outside a store. The next thing Chen knew, she couldn’t see her father or her aunt anymore.

The helpless six-year-old was forced to stroll on the streets of Shanghai alone for three days before meeting a farmer from Shandong Province, who adopted her and brought her up.

Her name was also changed from her birth name Xu Jinhui to Chen Huihui. 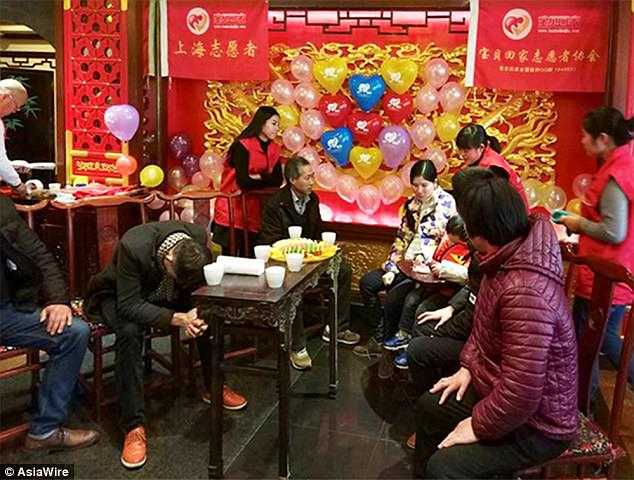 Chen Huihui, in floral jacket, finally reunites with her father, who sits opposite, after 26 years

Mr Xu, Chen’s biological father, said he did not mean to leave his daughter behind. He said after realising his daughter went missing, he looked for her around the train station for two days and two nights.

Mr Xu added that he and his wife had been tortured by guilt ever since. His wife passed away a few years after their daughter went missing. The man said his wife missed Chen too much and became ill.

The woman explained that she didn’t know whether her family had abandoned her on purpose or lost her by mistake. The thought had tortured her for 26 years.

Chen said she had always wanted to find her parents despite being adopted by a kind man.

After few months of search, the volunteers at ‘Baby Come Home’ found a matching profile in their database. The profile belonged to a man who was looking for his missing daughter.

The volunteers then arranged a DNA test between the two parties and the results confirmed they were biologically related.

The long-lost father and daughter were arranged to meet at the Jinghuifang Hotel in Shanghai, thanks to the volunteers.

According to Beibei, the supervisor from ‘Baby Come Home’ in Shanghai, the organisation has helped 2,267 families in China to find their missing members.

Chen Huihui and Xu Qibao were the first family the organisation has successfully helped in Shanghai.