When it comes to the early days of dating, holidays can be tricky times.

But as one couple have proved with an adorable viral joint Valentine’s Day and birthday card, sometimes leaning into the awkwardness can be the best course of action.

The card was submitted to Hinge after being created by a woman named Alyssa, who had met her now-boyfriend Colin three weeks before Valentine’s Day and his birthday.

Elephant in the room: A woman has gone viral with a clever card she made for her beau of three weeks when they met on Hinge just before his birthday and Valentine’s Day Getting around it: Alyssa wished Colin a happy birthday and a ‘happy Wednesday’ adding that she crossed out Valentine’s ‘so it’s not weird’

When the big days were approaching, Alyssa was aware of jumping the gun on a romantic gesture and instead decided to approach the situation with a bit of humor.

Instead of buying a present or proposing an expensive dinner, Alyssa crafted a card that did nothing to shy away from how ‘weird’ it can be to celebrate Valentine’s Day too early in a relationship.

Alyssa adds: ‘I sorta like you – let’s not make this weird. So uh…’ 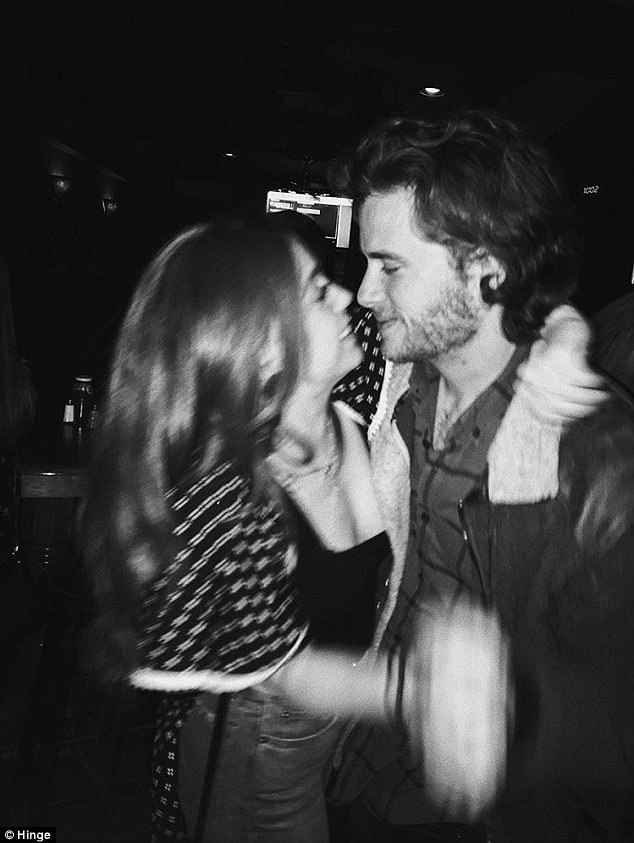 Getting together: Alyssa and Colin (pictured) have since become boyfriend and girlfriend

The inside of the card continues, ‘Anyway… Happy birthday,’ and then adds ‘Happy Wednesday’ with the word Valentine’s crossed out, ‘(so it’s not weird)’.

After Alyssa sent photos of her creation to Hinge, the app posted it on social media, writing: ‘One of our users sent us this pic of the hilarious Valentine’s/birthday card she made for her new Hinge boyfriend. WHEN IN DOUBT, FLAUNT YOUR AWKWARDNESS.’

The post has been liked more than 3,500 times and attracted plenty of praise for Alyssa from users.

The card, signed by Alyssa with a little heart, was apparently also a big hit with her new beau, as he created his own card when her birthday rolled around – even though by then the pair had become an official couple. 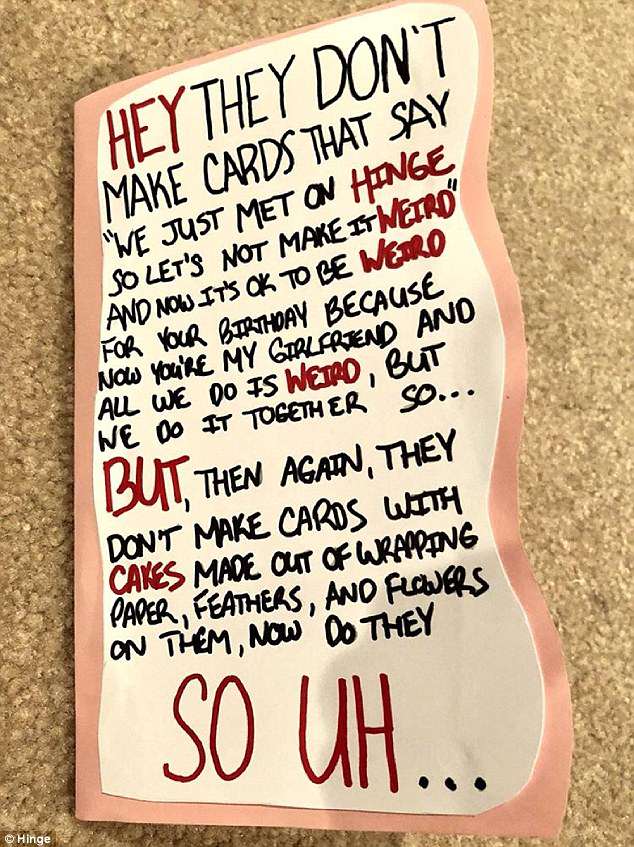 Returning the favor: For Alyssa’s recent birthday, Colin created his own version of the card 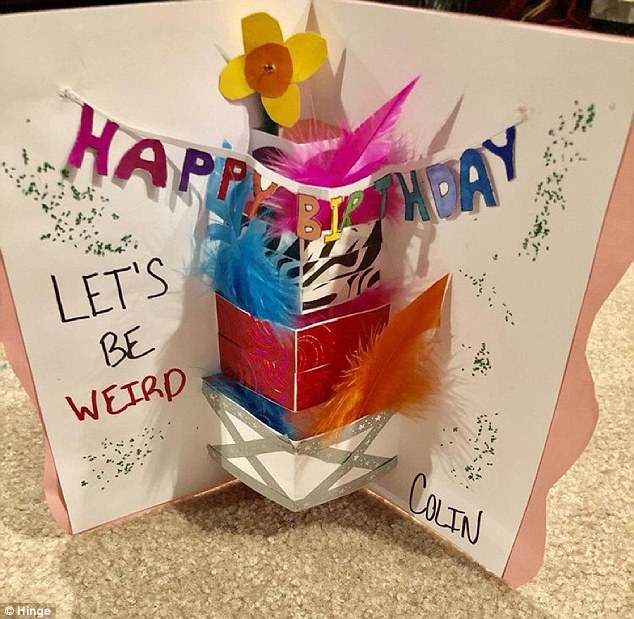 Simply sweet: He added a flourish to the inside of the card, and signed off ‘let’s be weird’

‘Hey. They don’t make cards that say, “we just met on Hinge so let’s not make it weird” and now it’s OK to be weird for your birthday because now you’re my girlfriend and all we do is weird, but we do it together so…’ Colin wrote.

The card continues: ‘But, then again, they son’t make cards with cakes made out of wrapping paper, feathers and flowers on them now do they. So uh….’

The inside of the crafty creation includes just that, a little pop out feature with wrapping paper, feathers and flowers topped with a banner reading ‘Happy birthday.’

Colin then signs the card: ‘Let’s be weird.’