A bride-to-be has halved her body weight after making a New Year’s resolution at to slim down at the start of 2016 as she feared her size 24 bulk would stop her from breathing in her sleep and make her too fat to have children.

Danielle Griffiths, 27, of Warrington, Cheshire was 21st 11lb at her biggest and was diagnosed with sleep apnoea – where sufferers stop breathing temporarily in their sleep – and swollen lymph nodes.

After account manager Danielle’s amazing transformation, she is now looking forward to walking down the aisle.

‘My partner Lee Green, 26, proposed to me in November during a horse drawn carriage ride in Central Park in New York. It was so romantic.

‘Now I can choose whatever wedding dress I want, rather than just whatever fits. Beforehand I hated people taking my pictures and the idea of wedding pictures would have filled me with dread, but now I’ll be happy to have lots of snaps of our big day.’

Danielle Griffiths, 27, from Cheshire has halved her body weight by sticking to her 2016 New Year’s resolution to slim down

At her heaviest, Danielle weighed 21st 11lb and was diagnosed with sleep apnoea and swollen lymph nodes

Danielle, who admits she was ‘addicted to carbs,’ before her transformation, says that, growing up, she was always heavier than her friends and, although she had tried dieting before, she had never stuck at it.

‘I would go for a few weeks but all it took was putting a few pounds back on and I would fall off the wagon and just stop going to slimming classes,’ she confessed. ‘I wasn’t really in the right mindset for it.

‘When I wasn’t trying to slim, breakfast would be a sugary cereal like Coco Pops, followed by a second breakfast of toast. I was having a huge side of carbs with every meal – usually chips. I would eat crisps and a whole packet of biscuits between meals and I had no idea about portion control.

‘Now, looking back, I haven’t a clue how I managed to eat such huge plates of food.’ 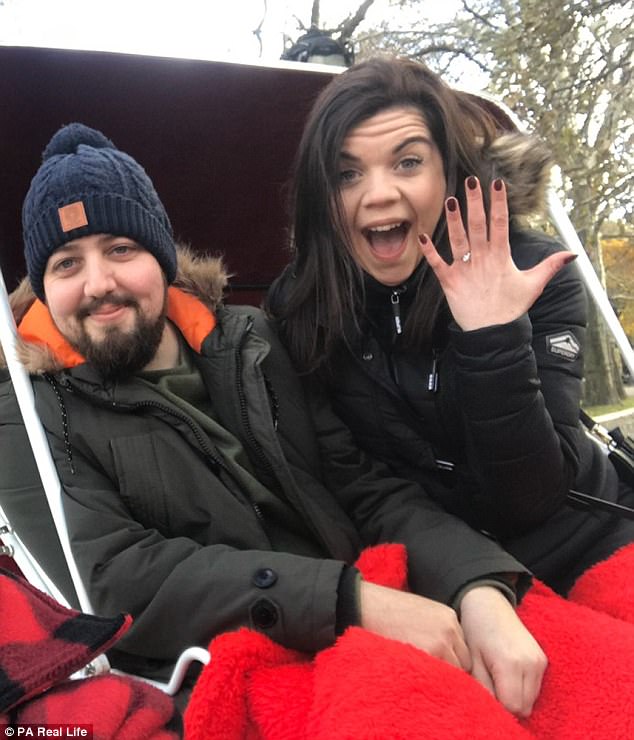 Danielle and her partner Lee Green, 26, got engaged during a horse drawn carriage ride in Central Park in New York

In January 2015, Danielle joined her local Slimming World group and in under two years went from 21st 11lb to a trim 11st 11lb

But it was her sleep apnoea, which doctors said was caused by being overweight and when she read that it could affect her fertility, that finally persuaded her to change.

She said: ‘I knew I was too young for these sorts of health problems and I knew it could affect my fertility. It really worried me.

‘Having kids was important to me so I decided to enjoy Christmas and then embrace a whole new life in the New Year.

‘I knew I wanted to get married and have kids. It was Christmas 2015, I’d been with Lee for years and knew he loved me, but my weight was already starting to affect my health.

Carb addict Danielle ate chips with almost every meal and snacked on full packets of biscuits. She now fills up on lean meat and veg and manages her portion sizes 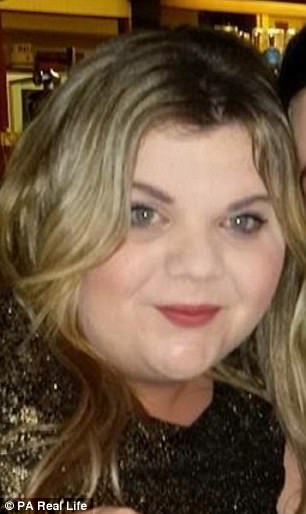 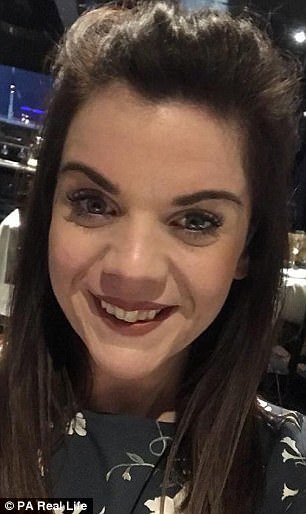 Danielle got a wake-up call when she read that being overweight can affect fertility. The bride-to-be is now looking forward to starting a family after her wedding

‘We weren’t trying for a baby, but we wanted kids and I knew getting pregnant would be so much harder and the risks would be much higher at my size.

‘Something just changed in my mind and I decided that it would be my New Year’s resolution to finally beat this.’

In January 2015, Danielle joined her local Slimming World group and in under two years went from 21st 11lb to a trim 11st 11lb.

‘Joining Slimming World, I learnt I could eat lean meats and lots of veg. It was much healthier but I wasn’t going hungry,’ she said. 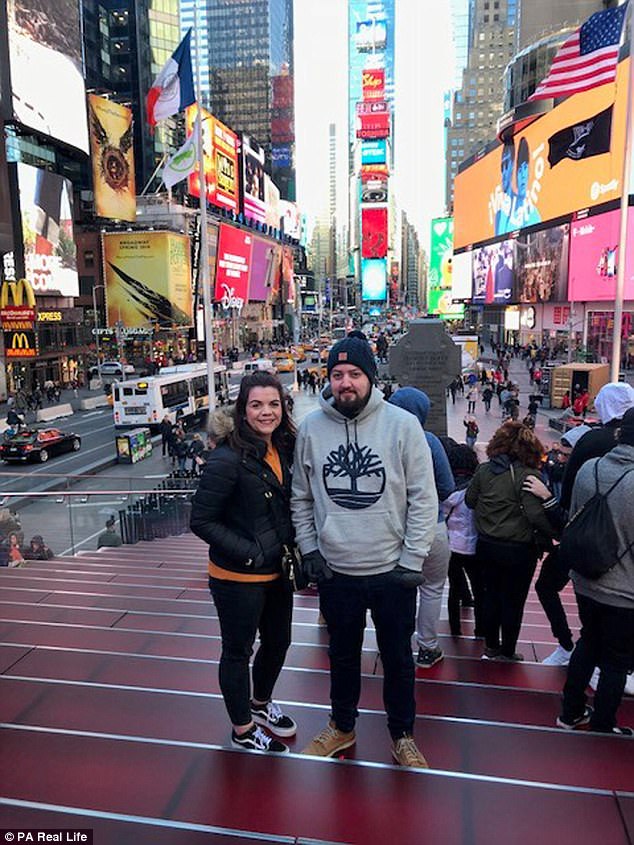 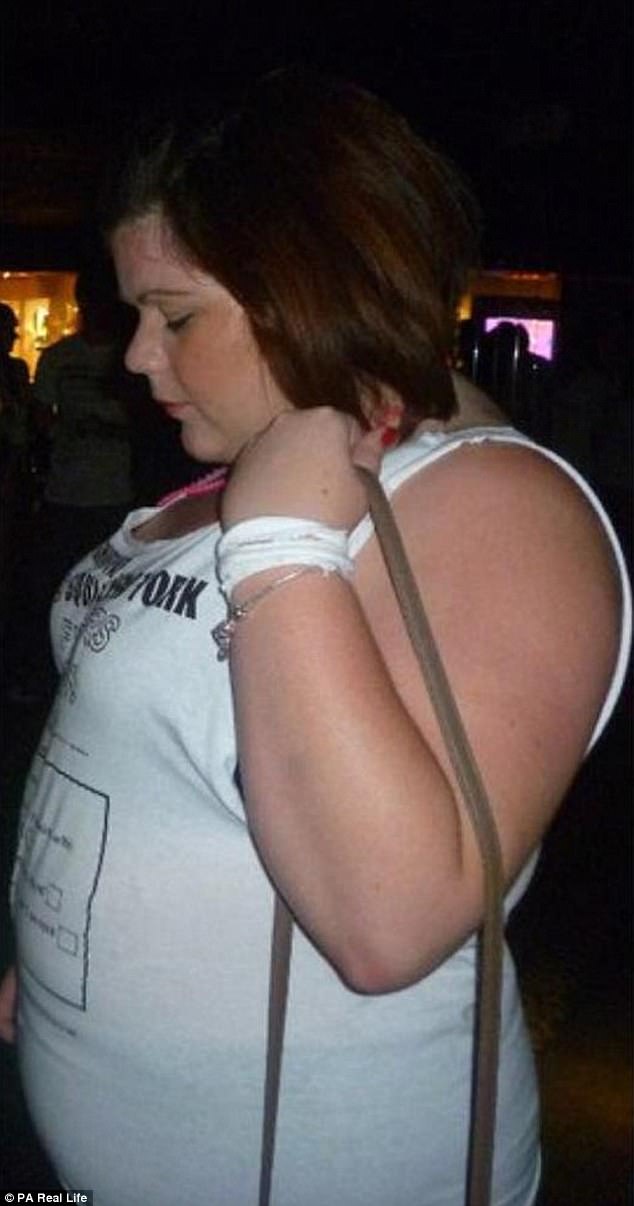 Looking back, Danielle can’t believe she she managed to eat such huge plates of food

‘In the first week I lost 9lb and from that point I was hooked. I have always had big loses but when I go off plan, I have huge gains so there have been ups and downs.’

Throughout her journey, Danielle has used Instagram, posting under @danielleslimmingworldjourney, to help her stay on track.

She explained: ‘I post pictures of everything I eat and I think that has helped me keep track on and also made me be honest about it. I don’t want to lie and pretend I haven’t eaten something. 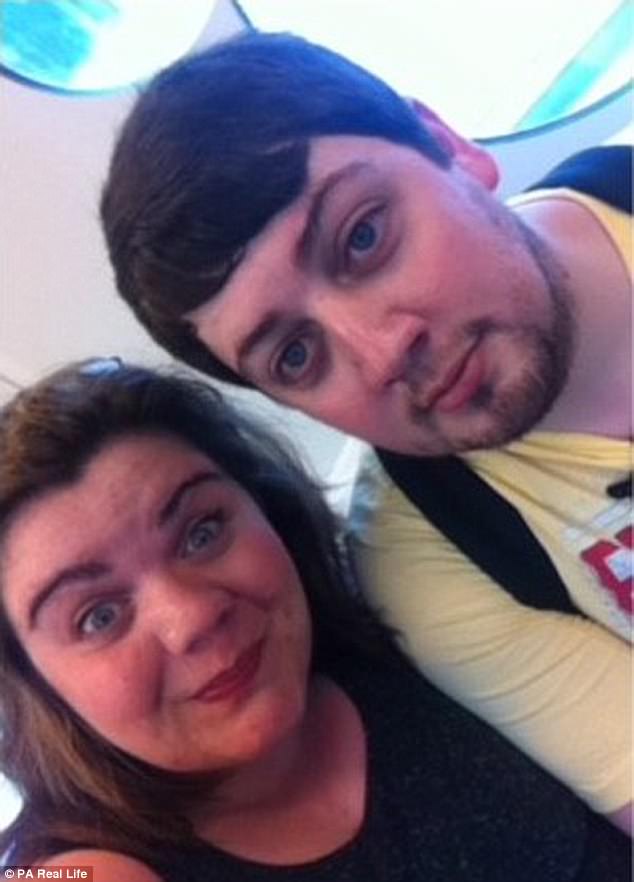 Although they weren’t yet trying for a baby, Danielle was worried her weight could affect her chances of conceiving in the future 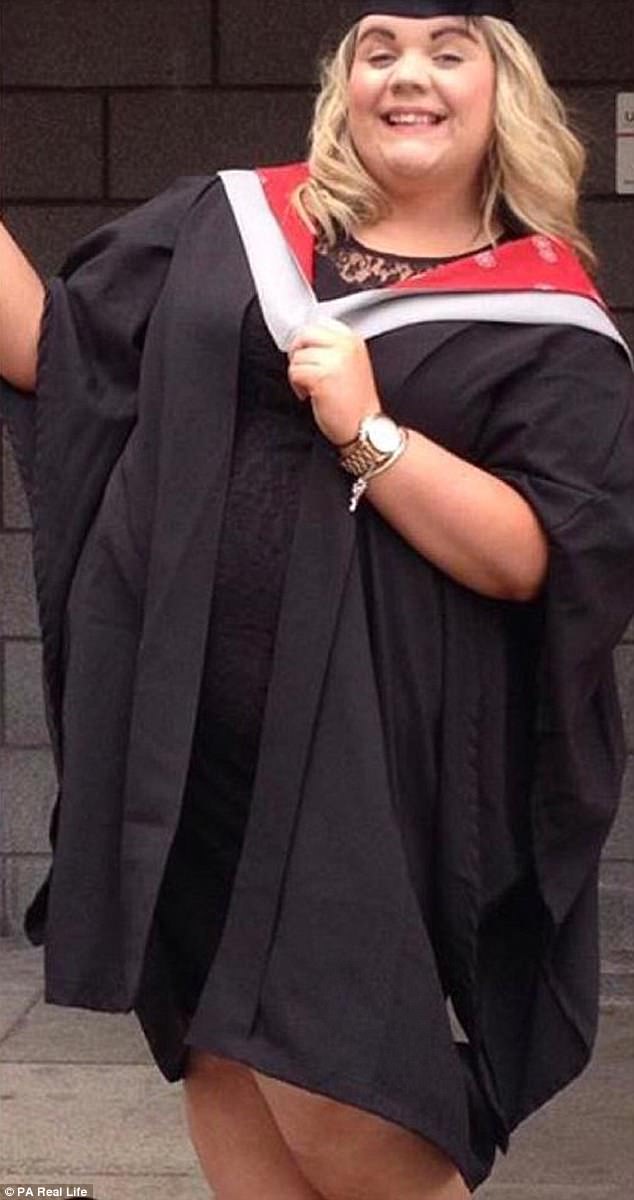 Account manager Danielle celebrating on her graduation day, before she lost weight

‘Sometimes I have to say I have had something bad, but I get a lot of support from Instagram as well.’

She continued: ‘I did a six-week transformation programme with my trainer Ashley Owen at Body Sculpt in Warrington and it was invaluable.

‘I don’t think I will ever be a gym bunny but it taught me what to do to make the most of my workouts and maximise my weight loss.’

Danielle decided to enjoy Christmas 2015 and then embrace a whole new life in the New Year. She’s now a size 12 and weighs a healthy 10 stone after reaching her goal weight

Now Danielle, whose health has also improved dramatically, is looking forward to being a stunning bride and to starting a family with the love of her life.

She said: ‘My health problems have completely gone and I feel like a different person. Now I have a wedding to look forward to and maybe even children in the next few years.

‘I have so much more energy and I just feel happier in my own skin. I do have some loose skin but that is part of the journey and I don’t think I would ever have surgery to get rid of it. For me it was about my health and now all my health problems have completely disappeared.

‘We haven’t set a date yet but hopefully in the next year or two and then we can plan the family I have already wanted without worrying about my weight. This has given us a fantastic future.’