A mother who initiated change in medical guidelines after her premature son was ‘left to die’ has given birth to a ‘miracle’ baby.

Despite being able to breathe independently, doctors refused to give medical care to the baby because he was born nine days earlier than what was considered acceptable for doctors to try and keep premature infants alive.

Devastated, his mother, from Ely in Cardiff, launched a campaign to change guidelines so that any babies born before 24 weeks of pregnancy – and showing signs of life – are given appropriate NHS treatment.

The Welsh Government decided to change its advice to health boards to ensure that severely premature newborns on the ‘threshold of survival’ are given a fighting chance. The rest of the UK follow guidelines on treating babies from a charity.

Now, almost five years later, Ms Jones and her partner, Chris Goodger, have finally had a baby boy, after dealing with the trauma of three miscarriages, a stillbirth, and Riley’s death since 2012.

Emma Jones, 28, of Cardiff, finally gave birth to a healthy boy, Jacob in October after having three miscarriages, a stillbirth, and her first baby dying less than two hours after birth 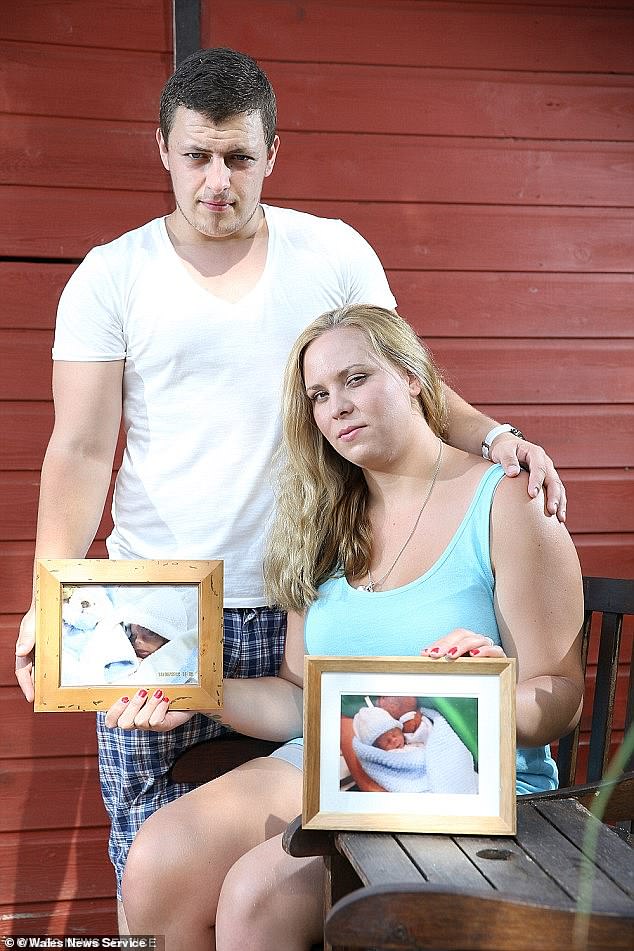 The mother and her partner, Chris Goodger, from Cardiff, Wales, sucessfully campaigned for medical guidelines to change after her first child born, Riley Goodger, was ‘left to die’ by doctors at University Hospital of Wales in 2013

Jacob Goodger was born last month at the same hospital as his passed brother, University Hospital of Wales, at 36 weeks and three days weighing 6lb 9oz.

‘This baby is our little miracle,’ said Ms Jones. ‘It feels absolutely amazing to have him home. ‘We finally have the bundle of joy we have wanted for so, so long.’

Ms Jones, reflecting on her years of heartache, said she hoped the change in NHS guidelines in Wales – announced last year – would give hope to other families.

She said: ‘I am immensely proud of myself, but at the same time I still cannot help but think that Riley may still be here today if the guidelines had been changed sooner.’

Riley died in the early hours of December 29, 2013, just 93 minutes after Ms Jones had given birth to him.

Doctors and nurses refused to treat the 480g child because the medical guidelines they followed, issued by the British Association of Perinatal Medicine, recommend that doctors do not attempt to resuscitate babies born before 24 weeks, due to the extremely high risk of developing serious disabilities.

After the tragic death, Ms Jones told Wales Online: ‘He wasn’t crying but I could see he was breathing – and his heart was beating through his chest wall.

‘But no care could be provided for him even tfhough he was living.

‘I was incredibly tired after just going through labour but my mother, father and partner tried everything they could to get the staff to change their minds.

‘They were begging because they knew what had happened with my previous son and they felt it couldn’t happen again. It was heartbreaking.’ 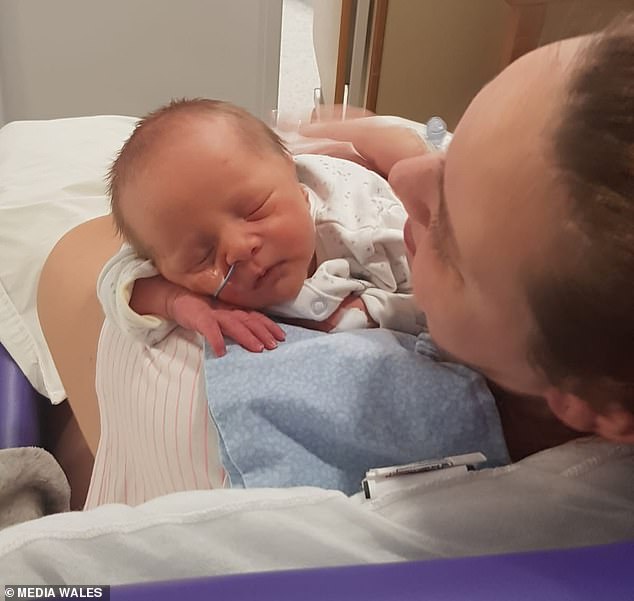 Doctors were unable to help Riley, born at 22 weeks, because it was not recommended to attempt to resuscitate babies born before 24 weeks, due to the extremely high risk of developing serious disabilities. Riley was nine days out of viability, despite breathing

WHAT ARE THE CHARITY GUIDELINES FOR GIVING PREMATURE BABIES MEDICAL CARE?

The British Association of Perinatal Medicine (BAPM) sets out guidelines for all doctors and NHS hospitals – across the UK – to follow when a baby is born very prematurely.

The NHS states that babies are considered to be ‘viable’ at 24 weeks or later into the pregnancy – this means it’s possible for them to survive being born from this point onwards.

The earlier the baby is born, the less chance there is of it surviving and being healthy, so the national recommendations for care of babies born very early are as follows:

25 weeks and over – The baby will be actively cared for to support breathing and keep it warm, and transferred to the neonatal intensive care unit for ongoing care.

24 weeks – Resuscitation and intensive support is usually offered unless parents and doctors agree that there is little hope of survival or baby’s level of suffering would outweigh the baby’s interest in continuing to live.

23 weeks – At this stage of pregnancy, there is greatest uncertainty about the outcome for an individual baby. Intensive support will be offered if parents specifically request it and the senior paediatrician/neonatologist (baby doctor) present feels it to be appropriate. Otherwise comfort care only will be given to your baby with no active intervention to support life.

22 weeks – At this very early gestation the chances of survival without severe long term problems are so low that active intervention to support life is not recommended and comfort care is given to a baby. An experienced neonatologist will be close at hand if appropriate, though the baby would not usually be given active support because the chances of survival are so low.

Ms Jones handed in a 2,759-signature petition into the National Assembly of Wales’ Petitions Committee.

Following this, The Welsh Government now advises health boards that when the a baby is on the ‘threshold of survival’, maternity teams should consult an on-call neonatal or paediatric team to ensure clinical assessments are planned and undertaken.

It also recommends the baby’s family should be involved in the decision-making process about ongoing care.

Now every health board in Wales has a midwife who takes the lead on bereavement support.

Wales’ chief medical officer Dr Frank Atherton said: ‘We recognised there was a need for the Welsh Government to develop this additional guidance, because the current professional guidance from the British Association of Perinatal Medicine does not state what the NHS should do to care for babies born alive before 24 weeks.’

Other government’s have not followed suite to step in and tighten guidelines, with NHS hospitals following the those endorsed by BAPM as the best available advice.

The pregnancy and birth of Jacob was far from straightforward for the couple. Due to her previous miscarriages, Ms Jones was ‘constantly monitored’.

‘I had weekly appointments and was given about 25 scans in total,’ she said.

‘It was worry after worry for me, but my consultant was absolutely marvellous and he pushed for me to have all these checks.’

Seventeen weeks into her pregnancy, Ms Jones feared she had suffered another miscarriage when she lost a lot of fluid.

‘It was an horrendous time,’ she said. ‘But thankfully there was fluid remaining and so I was given further checks to make sure the baby was okay.’

After the death of Riley, Ms Jones was given a cervical stitch in an attempt to keep her next baby in the womb for as long as possible.

Ms Jones was terrified there would be a high risk of complications, but made it to almost full-term (37-42 weeks pregnancy).

‘I struggled to believe that the baby was going to be okay,’ she said. ‘After waiting all this time for a healthy child, I feared something was going to go wrong.’ 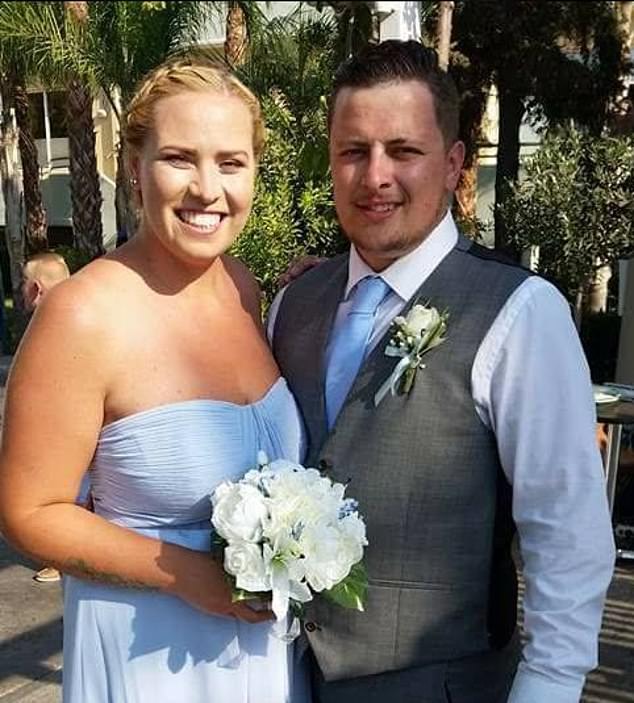 The couple pictured together at a relative’s wedding in 2016 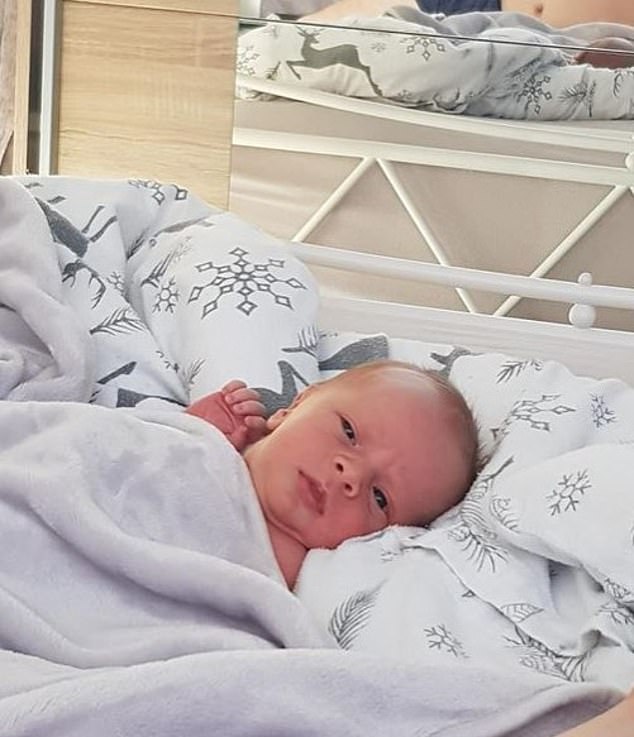 Five years since Riley Goodger’s death, ‘miracle baby’ Jacob Goodger was born. He struggled to breath when born at 36 weeks, but is now home and healthy

The couple were forced to face their fears, as Jacob had, in fact, been born with complications.

When baby Jacob was delivered via c-section, he initially struggled to breathe due to the large amount of fluid on his lungs.

‘I couldn’t see what was happening as I couldn’t move and was being stitched up,’ Ms Jones said. ‘I’d waited all this time to see my baby but I still couldn’t hold him [for long].’

Jacob was taken to the neonatal intensive care unit where he was placed in an incubator and given additional help with his breathing.

Ms Jones wasn’t able to see her baby for a further seven hours.

She still couldn’t move the lower half of her body due to the anaesthetic from the c-section, and had no choice but to be wheeled back to the maternity ward.

‘I was back in my empty room which was really upsetting,’ she recalled. ‘It wasn’t until six or seven hours later that I was able to move into a wheelchair and get myself down to intensive care.

‘When I got there it brought back a lot of memories. There were quite a few babies who were really, really small and it reminded me of holding Riley.’

Ms Jones and Mr Goodger were initially only allowed to touch Jacob through the incubator as he struggled to breathe independently.

But a week later, they were finally able to take home the baby they had waited for so long for, as his breathing improved quickly.

‘I needed to be in hospital for a week myself as I’d suffered nerve damage during the c-section, which was completely unexpected,’ she added.

‘I kept on feeling a burning sensation in my abdomen, when all the while I was trying to breastfeed too.

‘But I wouldn’t change it for the world. Every time I look at Jacob I realise how precious he is, and my family and friends feel exactly the same way.

‘We’re all just so happy to finally have our precious baby. He is our everything and truly worth the wait.’

Despite needed a couple of additional stays at the Noah’s Ark Children’s Hospital for Wales after suffering with bronchiolitis, Jacob is now settled into his home.

WHAT ARE THE UK GUIDELINES ON RESUSCITATING PREMATURE BABIES?

The British Association of Perinatal Medicine (BAPM) states that if a baby is born at less than 23 weeks, it is in the infant’s best interest not to resuscitate.

The BAPM charity is thought to make this recommendation to NHS hospitals on the basis such a premature infant does not have sufficiently developed organs to support life.

But the Welsh Government changed its advice to health boards to ensure that when severely premature newborns are on the ‘threshold of survival’, maternity teams should consult an on-call neonatal or paediatric team for individual advice.

The rest of the UK has not followed suit and continues to look to the BAPM for guidance.

‘In these circumstances there may be insufficient time to hold a detailed discussion with the parents before the baby is born.’

The charity also states that for those born between 23 and 24 weeks, and if a heart beat can be picked up, the decision should fall to ‘a professional experienced in resuscitation’.

The subsequent heart rate should then be used to decide whether to continue or stop.

Babies born at 24-to-26 weeks should be resuscitated unless its parents or doctors believe it will be ‘severely compromised’ as a result. The infant’s response to treatment should then dictate if it is taken to intensive care.

The BAPM adds it can still be in the baby’s best interest not to resuscitate.

For babies that arrive after more than 25 weeks, resuscitation should take place, the BAPM states.

It stresses, however, this is ‘not a set of instructions, but a framework to highlight the range of evidence and opinion that needs to be considered by staff and parents’.

The guidance is also under review by the Nuffield Council on Bioethics.