A woman has confessed to being addicted to steroid creams that left her virtually skinned alive, ‘looking like a burns victim’ and in too much pain to wear clothes.

Juli-Anne Coward, 50, has spent decades battling topical steroid withdrawal, which caused agonising flare-ups of sore, cracked skin, every time she tried to wean herself off the eczema lotions prescribed to her as a child.

At one point, the artist, from Leominster, Herefordshire, said her entire body was covered in raw patches and oozing boils.

Yet she has finally quit her dangerous ‘habit’ for good and is slowly making progress.

Ms Coward, who has been with her partner Carolyn, 54, for 20 years, said: ‘The longer I am without them, the better I become. Each day now, I’m feeling better and better.’ 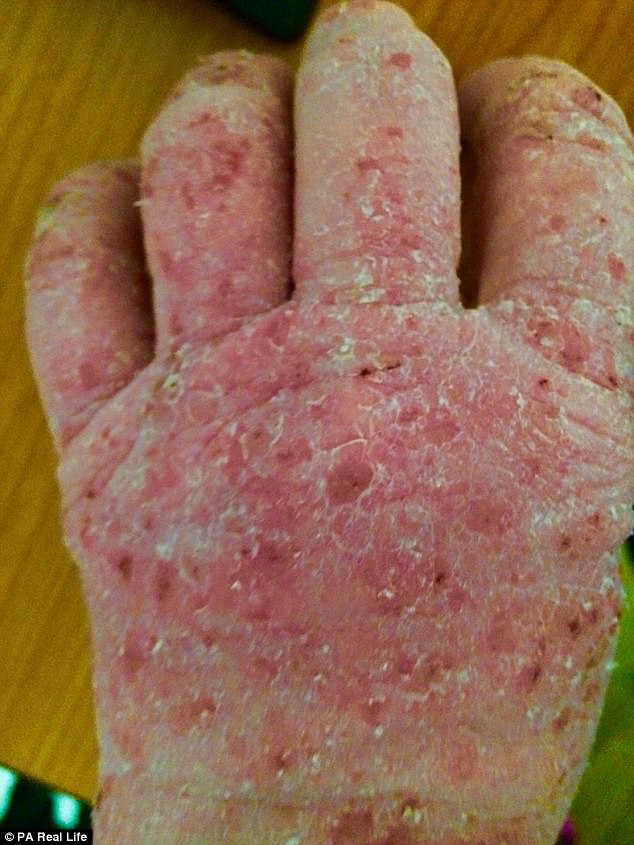 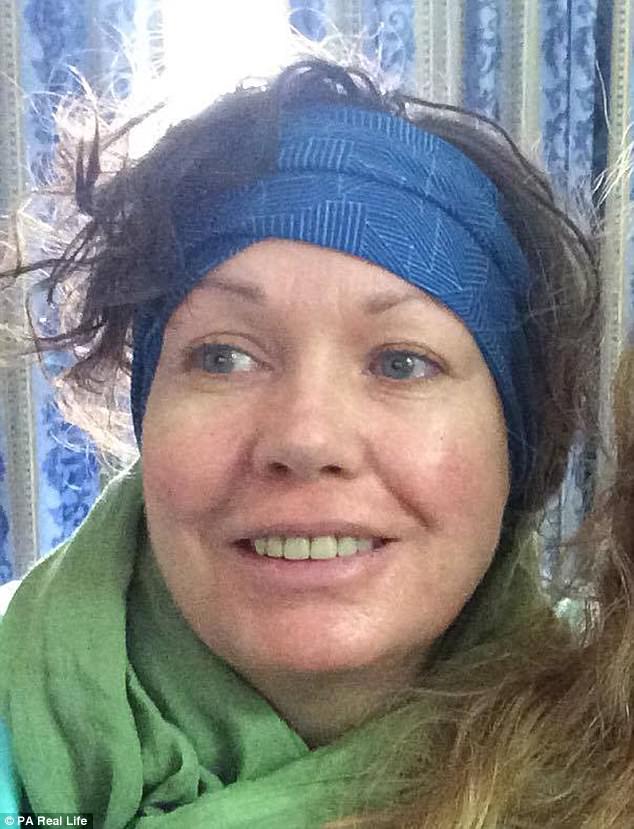 The condition is characterised by red, itchy, burning skin that can appear after ceasing topical steroid treatments, or even between use.

Sufferers become increasingly tolerant to the condition and experience psychological symptoms on withdrawal.

Ms Coward said: ‘I want to say to others that I understand coming off steroid creams is scary, but support is out there.

‘The longer I am without them, the better I become. I’m definitely seeing progress. I managed a four-mile walk the other day, which is something I haven’t done in years.

‘When I first came off them, my body went through hell but I finally feel like I’ve turned a corner.

‘Arm yourself with as much knowledge as you can, listen to your body and do what’s right for you and your skin.

After suffering agonising flare-ups for years with doctors being unsure what was behind her symptoms, Ms Coward found the online support group ‘The International Topical Steroid Addiction Network’ in 2016.

Reading through posts, she became convinced that she was suffering from the condition.

Ms Coward said: ‘It was really emotional. I sobbed and sobbed, because I couldn’t believe this was happening to me.

‘I was terrified at the prospect of what was to come, too, but I knew I had to come off the creams to stop this once and for all.’

Despite her progress, Ms Coward is still forced to wear her clothes inside out to prevent the seams from irritating her.

She also wraps her skin in bandages every day, which can take around two hours.

Yet she sheds far less than she used to, with her skin also not weeping as much and being less red. 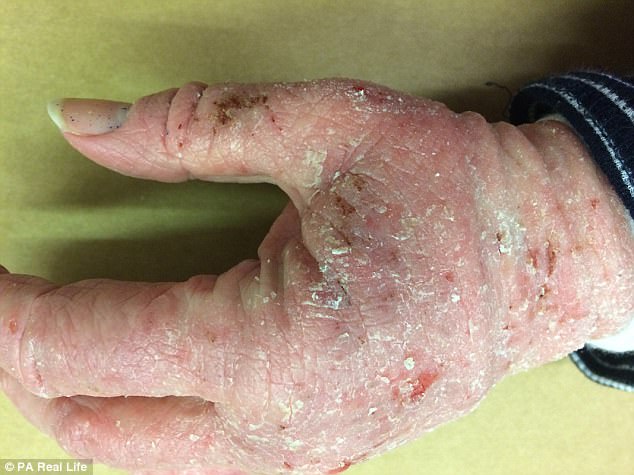 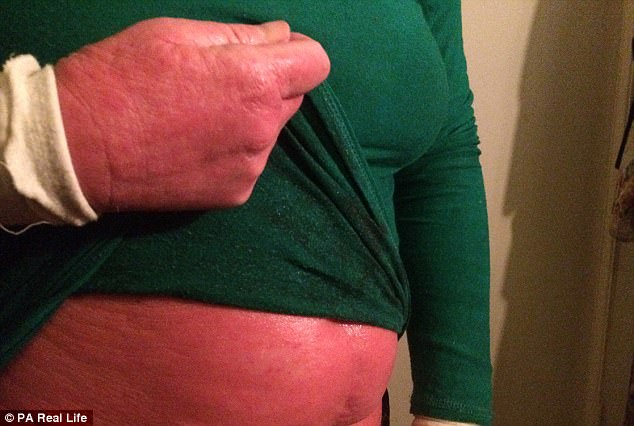 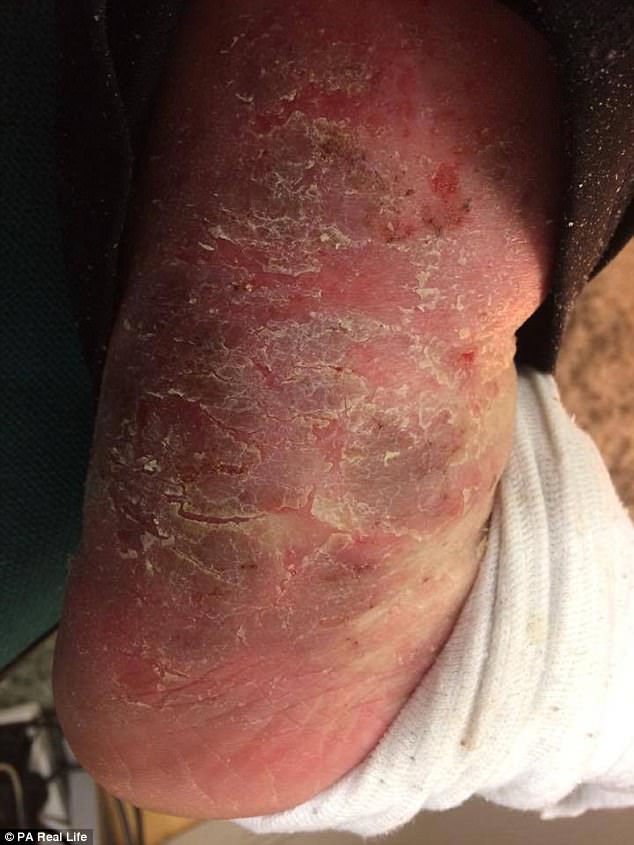 Despite visiting many doctors over Ms Coward’s years of suffering, her diagnosis was unclear 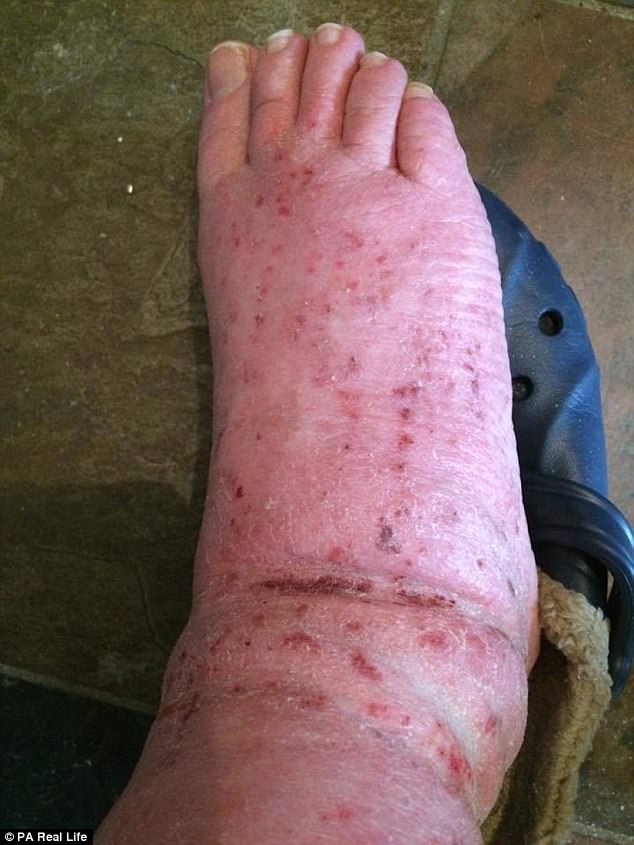 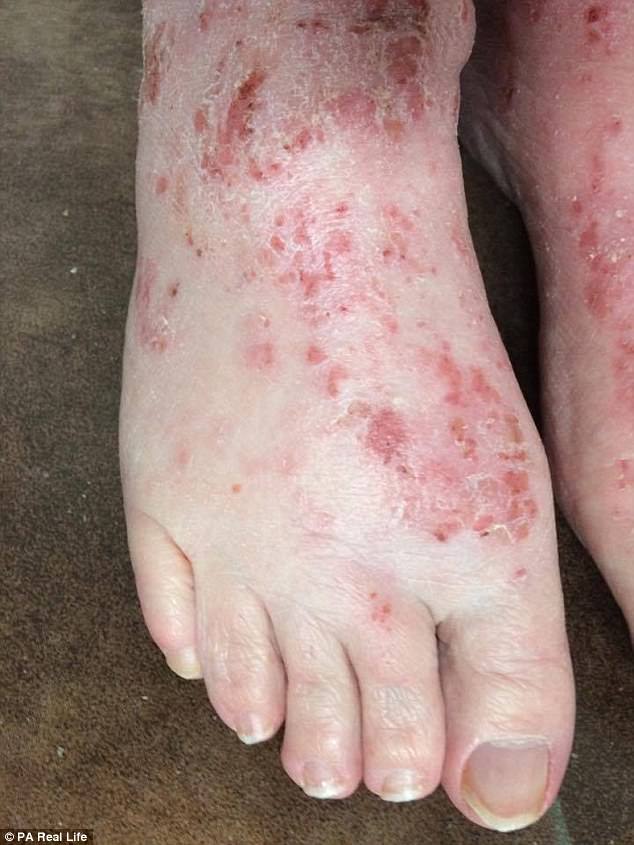 Despite making progress, she is still forced to wear her clothes inside out to prevent irritation 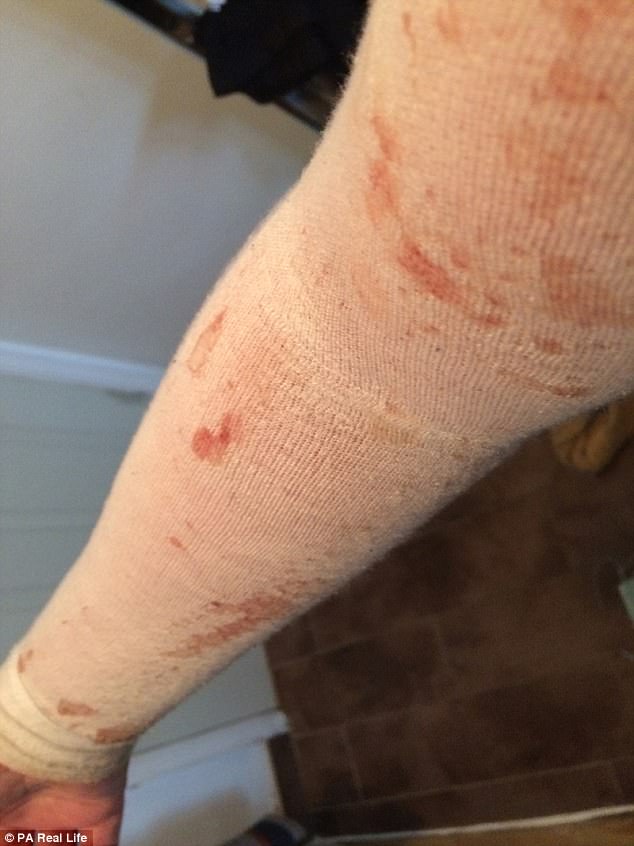 She must also wrap her skin in bandages every day, which can take around two hours

‘My confidence was absolutely gone’

Ms Coward was diagnosed with eczema when she was just three months old and was prescribed a topical steroid cream to calm her itchy skin.

She said: ‘My mum Patricia, being a caring parent, applied the cream to my skin for me, without any idea of the problems it would go on to cause.

‘She was only 19 when she had me so, being so young, she didn’t question what the doctors had told her to do. She just wanted to help.’

Yet, throughout her childhood, Ms Coward battled various illnesses and infections.

Then, at around nine years old, she suffered an allergic reaction to penicillin, resulting in a build-up of fluid in her lungs.

After being prescribed a six-month course of cortisone – a type of steroid – injections to help her regain her strength, Ms Coward’s skin went ‘completely haywire.’

She said: ‘My eczema went absolutely crazy, and I developed the worst acne you’ve ever seen.

‘The spots were almost like boils – far beyond typical teenage blemishes. They’d crack and bleed.

‘I had one on my leg which was so painful, I couldn’t even put my foot down. My confidence was absolutely gone. I hated PE at school, hated showing off my legs. I missed out on a lot.’ 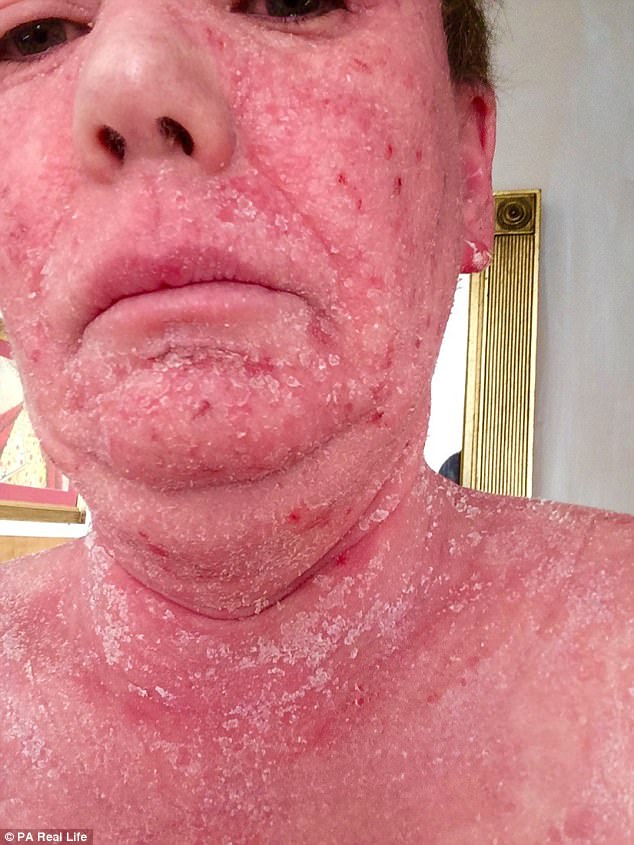 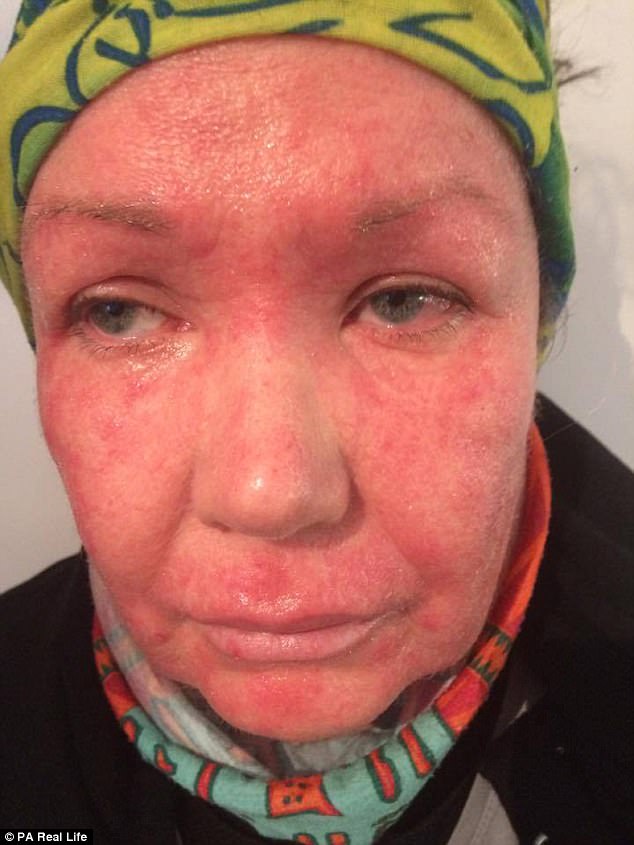 After having fluid in her lungs as a child, Ms Coward was given steroid injections that caused her skin to go ‘haywire’ 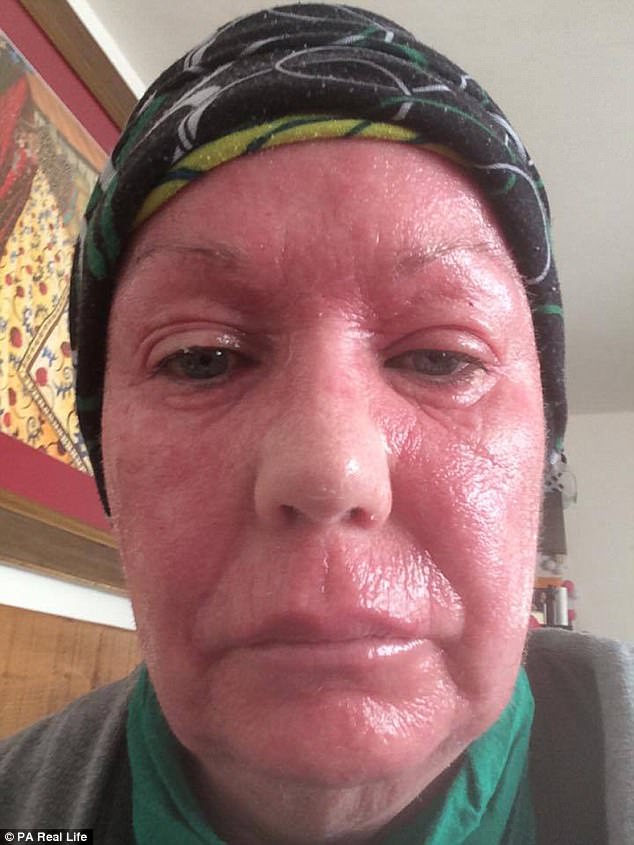 To help her skin, Ms Coward took steroid creams in her 20s but panicked if she ran out 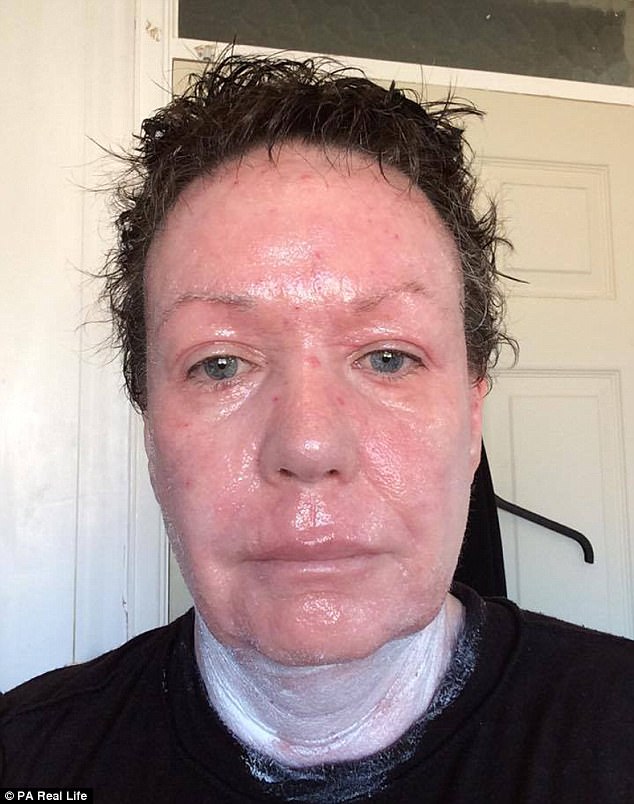 Unable to wear clothes, Ms Coward was virtually housebound by her addiction at one point 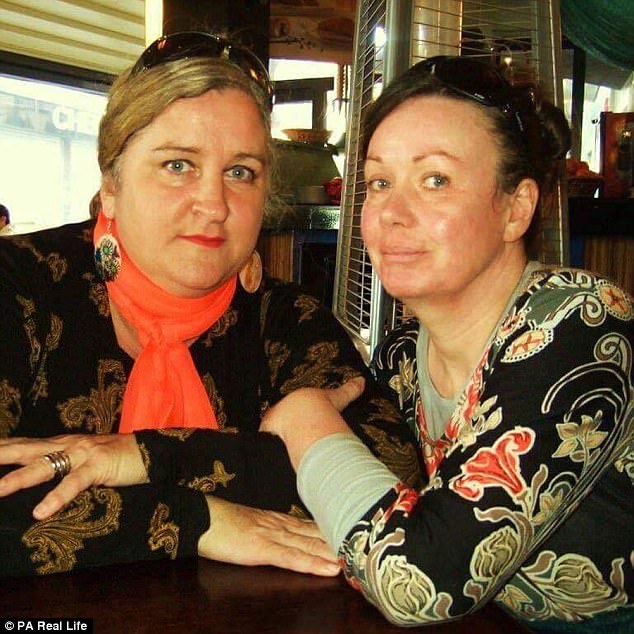 She is now making good progress (pictured with her partner Carolyn, 54)

‘I lived in fear of running out of cream’

By the time she reached her 20s, Ms Coward was using a low-dose steroid cream every day.

It cleared her skin and, gradually, her self-esteem began to improve.

Yet, if she ran out, or forgot to apply the cream, her skin would flare up again.

Ms Coward said: ‘I lived in fear of running out of cream. I could never go anywhere impromptu just in case.

‘It almost felt like an addiction. If I didn’t apply it, my skin would start to burn.

‘The only way I can describe it to people is that it feels like my clothes are made of nettles and full of wasps.’

In her 30s, Ms Coward had a particularly bad episode, when doctors suggested she try a cream commonly used to treat scabies.

Triggering an agonising reaction, it saw her skin shed, peel and bleed, to the point where it was too painful to even wear clothes and left her virtually housebound.

After years of visiting doctors, Ms Coward was worried that she would have to use steroid creams for the rest of her life.