Then, almost as soon as they touched down on British soil, they boarded a train to France and vanished into thin air.

Around this time, Lauren’s parents, Brian and Angela, a retired couple in their 60s originally from South Shields, Tyne and Wear, also did a disappearing act from their luxury detached property in British Columbia, Canada. 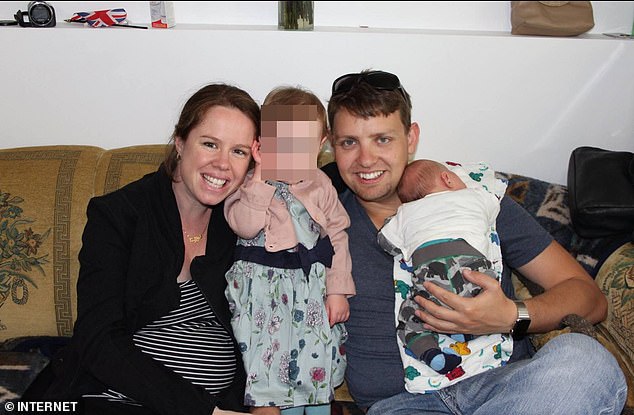 For more than three years, family, friends and the police had no idea as to the whereabouts of Mr and Mrs Etchells, their daughter, Lauren, and her young family.

They had become fugitives.

Their decision to leave Canada with indecent haste had been prompted by a custody battle over Kaydance in which Lauren was engaged with her estranged wife, Tasha Brown, 45.

After marrying in 2012 and conceiving Kaydance through a sperm donor, Lauren, 33, who carried the child, then decided to rekindle a heterosexual relationship with an old flame, Marco van der Merwe.

Afraid Tasha was going to take Kaydance from her, Lauren plotted to leave Canada in a hurry, helped, apparently, by her parents.

Earlier this month, that adventure came to an end when Mr and Mrs Etchells, Lauren, Kaydance, now four, and her little brother, Marcus, three, were arrested as they attempted to land a 13ft inflatable dinghy in Jersey. 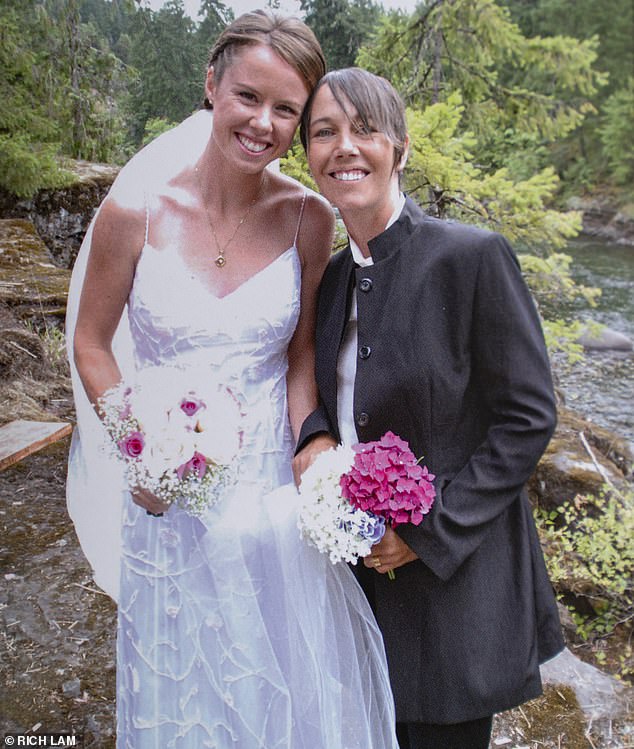 The Etchells decision to leave Canada with indecent haste had been prompted by a custody battle over Kaydance in which Lauren (left) was engaged with her estranged wife, Tasha Brown (right), 45

Lauren is currently in a cell in HM Prison La Moye on the island, pending a further hearing next month, while her parents have been granted bail until sentencing and are staying in a Jersey hotel.

Meanwhile, Kaydance and Marcus are both in the care of Jersey children’s services.

Many questions remain unanswered, but for the moment, Kaydance’s other mother, Tasha — ‘she called me Mama T’, she tells the Mail emotionally from her home in Nanaimo, British Columbia — is ecstatic her daughter has been found, admitting she wept with joy when she heard the news.

‘So many precious moments of my child’s life have been stolen from me. I can’t wait to be a mother again,’ she says.

However, because Tasha didn’t give birth to Kaydance, there is some doubt whether the authorities in Jersey will even recognise her as the child’s other mother.

Despite instructing lawyers in Jersey and preparing for a Hague Convention hearing that may decide Kaydance’s fate, Tasha admits her battle could falter at the first legal hurdle. 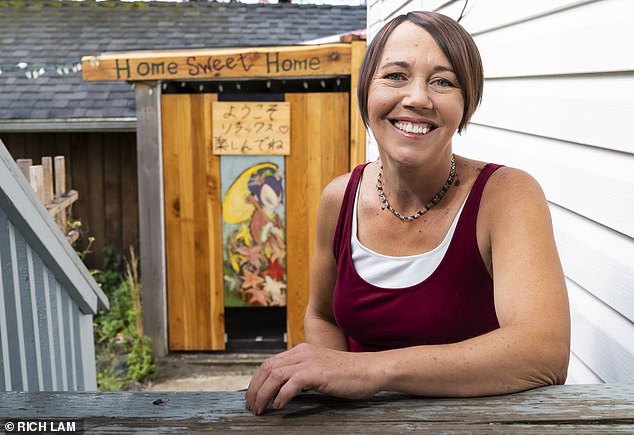 Because Tasha didn’t give birth to Kaydance, there is some doubt whether the authorities in Jersey will even recognise her as the child’s other mother

‘I have been informed by my lawyer in Jersey that, although same-sex marriage is legal there, the law is rather archaic and doesn’t make any reference to same-sex parents. Therefore, strictly speaking, I may not fall within the definition of ‘parent’ in Jersey,’ she says.

But it’s far from the only legal complication. Because Tasha and Lauren once considered moving to the UAE, where same-sex relationships are illegal, Tasha removed her name from Kaydance’s birth certificate.

‘It’s the worst decision I ever allowed to happen,’ Tasha says today. ‘But I trusted Lauren completely and the judge said he recognised we were doing this in the best interests of the child.’

It’s not the first time Tasha, who is preparing to fly the 6,000 miles to Jersey, says she’s faced doubt over her role in Kaydance’s life.

Lauren’s mother, Angela, apparently, never accepted her as the full parent of her granddaughter. 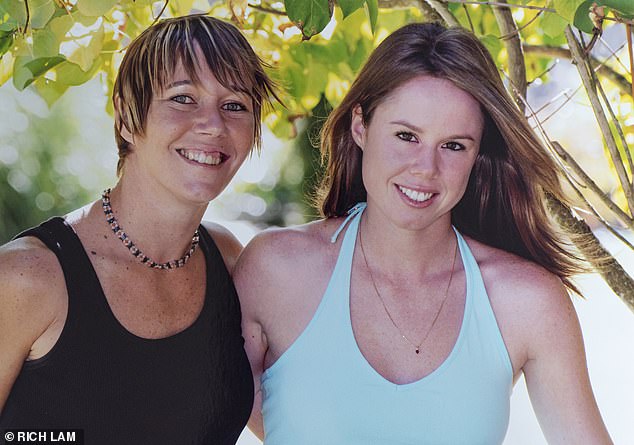 Because Tasha and Lauren (pictured in Nanaimo, British Colombia) once considered moving to the UAE, where same-sex relationships are illegal, Tasha removed her name from Kaydance’s birth certificate

And, according to Tasha, Angela Etchells was also uneasy that her daughter was a lesbian. ‘She’d say things to Lauren like: ‘You’re too pretty to be gay; you just haven’t met the right man yet.’ ‘

Mrs Etchells also comes in for sharp words from Noel Brown, Tasha’s father. While he was once friends with Brian Etchells, he tells the Mail he felt rather differently about Angela.

‘I wasn’t keen on Angie — rather a selfish woman, I thought,’ he says. ‘Brian was under the thumb of the wife and daughter. It’s my belief they cooked it up between them and he went along with it.’

One can only feel desperately sorry for the poor children at the heart of such a mess.

Indeed, the bitter fall-out is a million miles from the joy Tasha says she and Lauren experienced when they conceived Kaydance in 2014, two years after they married.

‘I thought we would be together for ever,’ she says. ‘I had no idea of the nightmare that was to come.’

Yet Tasha also admits that arguments frequently raged between her and Lauren, on everything from money to parenting.

Perhaps more significantly, she also confesses to clashes over the emotional complexities at the heart of their family. 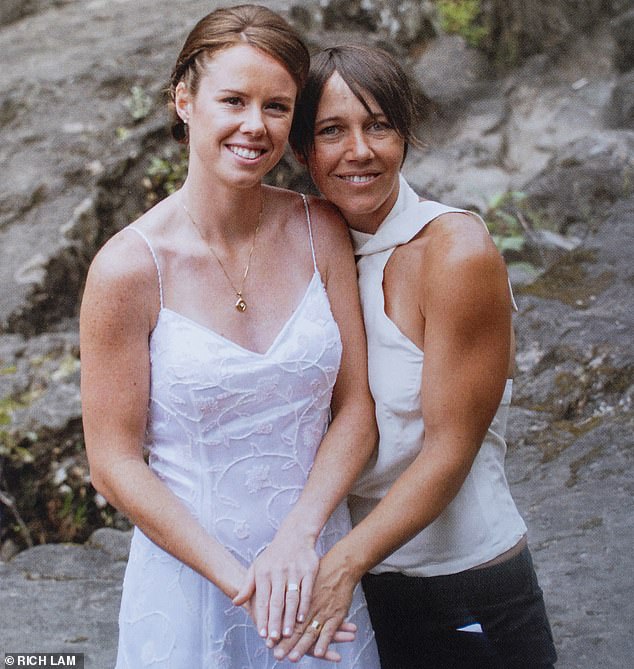 The exes bitter fall-out is a million miles from the joy Tasha says she and Lauren experienced when they conceived Kaydance in 2014, two years after they married

‘Lauren felt she had more of a right because she was the biological mum. But I was just as much a mother to Kaydance in the eyes of the law and in my heart.’

Despite her composure today, Tasha says she has endured an agonising three years. As well as suffering depression, she says she’s been hospitalised with stress-induced heart pains.

So where have Lauren and her family been during their three years on the run? And what happened to Marco, Lauren’s new man?

There is, as yet, no information — only a string of intriguing clues.

It has been supposed that the family made the journey to Jersey across the Channel, presumably from France, in that dinghy.

On the island, however, a different theory has been postulated.

Around the time the Etchells made their landing in Jersey, just after 8am on July 2, a trawler was sighted in the bay.

Some believe the family must have paid its crew to transport them and the dinghy from France.

The trawler would have dropped them as close to the port as it could safely manage, leaving the family to sail the dinghy to shore.

Unfortunately for them, an off-duty RNLI volunteer saw it coming ashore and alerted the coastguard, who then alerted the police. 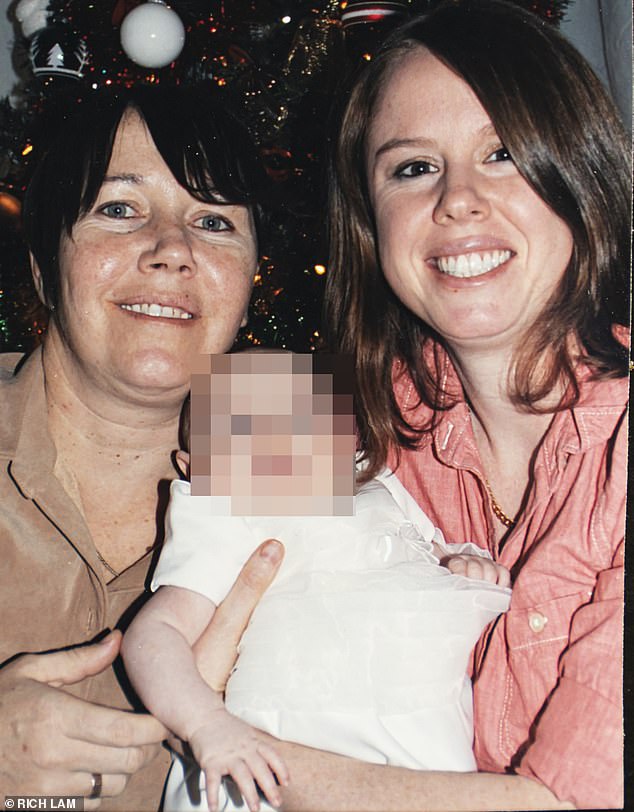 In the ensuing conversation with police officers, the Etchells explained coolly that they were on a day trip to Jersey and even requested ice creams for the children. Passports for the youngsters were later discovered to be fake.

So what made them decide to pitch up in Jersey?

Given the fact they appear to have had no belongings with them, it seems they were in a hurry.

The most likely scenario is that one of their pursuers had got too close for comfort.

Interpol was on their trail, along with the Canadian police. Tasha says she had also hired private investigators, before laying them off in 2017 when she ran out of money, after running up legal and investigative bills of £61,000.

Tasha’s father, meanwhile, believes it was the family’s intention to return to England.

‘If they’d gone straight to England, they’d have been subject to passport controls,’ he says. ‘But if they went from Jersey, they wouldn’t need to show passports as it’s part of the British Isles.’

The Etchells have strong links to the Middle East, and Tasha and her father believe the fugitives spent at least some time there.

Mr Etchells worked as an engineer in Saudi Arabia and then Qatar, and during their postings in the Middle East, the Etchells and their two daughters enjoyed an enviable expat lifestyle.

Then, in 2002, they moved to Victoria in British Columbia, where, after leaving school, Lauren trained to become a teacher.

She met Tasha Brown through a dating website in 2007, and they set up home in Nanaimo, two hours from Victoria. After marrying in August 2012, they were keen to start a family.

In 2013, they found a sperm donor, a friend from Edmonton, who agreed to help.

Lauren gave birth to Kaydance in September 2014. The following year, Marco van der Merwe, whom Lauren has said she dated for three years at school in Qatar, flew to Canada to visit her. Tasha says they had already discussed having another child. Lauren suggested asking her ex-boyfriend to father the baby, as their previous donor had moved away.

Tasha agreed. But their marriage had rapidly deteriorated after Marco’s arrival. ‘I had no idea there was anything between them,’ says Tasha.

The women tried counselling without success, and Lauren moved back in with her parents. Then, in 2016, Lauren’s lawyer announced that his client was pregnant by Marco, and suggested Tasha could be an aunt to their daughter, instead of a mother.

‘Would anyone ever suggest to the father of a child that he could ‘just’ be an uncle? I was disgusted,’ recalls Tasha.

Instead, the two women shared custody of Kaydance. Lauren and Marco’s son, Marcus, was born in April 2016. By now, Tasha had suspicions that Lauren was planning to leave Canada after finding a one-way ticket to Qatar on Lauren’s email account, and informed her lawyer.

Consequently, Lauren was ordered by a court to surrender her and Kaydance’s passports.

But unbeknown to Tasha, Lauren had applied for a Canadian passport for Kaydance, against the court order, and had got permission to renew her own British passport. The passports were used to flee the country in May 2016.

It is believed that, initially, Lauren was planning to take Kaydance to Qatar, where Marco had been working as a robotics engineer.

When their plane landed at Gatwick, however, she promptly got on a train to France. Marco was quickly jettisoned.

Later, in an email to the Canadian newspaper Times Colonist in October 2016, he wrote: ‘I told them [the police] I do not know where Miss Etchells is, nor do I have communication with her as she had broken off all communication for fear of being tracked.’

So where were they?

‘At first, the British authorities seemed to be hot on the trail,’ says Tasha’s father. ‘I was told they were in France and then Spain, but the trail went cold.’

The considerable amount of cash they may have earned from the transaction presumably helped to fund their expenses.

Tasha says she understands the Canadian government is seeking Lauren’s extradition to stand trial for violating court orders and fleeing the country.

Yet Tasha does not want to see her wife further punished. ‘I don’t want her to go to jail. She is the mother of my daughter and she has another child,’ she says.

Instead, she hopes Lauren will be returned to Canada to sort out their troubled family situation.

‘Kaydance is in care and needs to be back with her family, back with me,’ she insists. ‘I have lost so much of her life already. I want to rebuild the bond we had and show her I love her, that I’m her other mother.’

Tasha’s father, Noel Brown, is more critical of his daughter-in-law. ‘It was cruel of Lauren to do this,’ he says. ‘Kaydance will be traumatised. I don’t think she’ll recognise Tasha, and that makes me very sad. It will take time, but they will rebuild their relationship.’

Meanwhile, the Etchells, who will find out on August 8 if they will be jailed, have defended Lauren.

‘Our daughter’s motivation was only based on love and a desperate need to protect her children,’ they said.

That cuts no ice with Tasha. ‘Despite our difficulties, I never wanted to take Kaydance away from Lauren,’ she says.

‘She knows that — but she took her away from me. All I care about now is having my daughter back in my life.’