A woman in a wheelchair was punched in the head and sprayed with a fire extinguisher after trying to block protesters – allegedly with a knife in her hand – during the George Floyd riots in Minneapolis last night.

The woman claimed she was ‘peacefully protesting’ to stop people from looting a Target store, but she was quickly set upon by a crowd who subdued her in angry scenes on the second night of violence in the city.

The crowd outside the Target store shouted that the woman had a knife, and footage showed her holding what appeared to be a sharp object.

Named online as Jennifer, she later said she had been ‘punched in the head several times’ before others tried to restrain her. 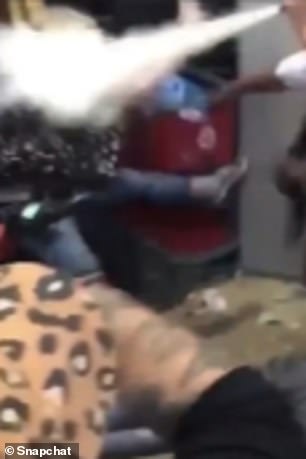 A woman in a wheelchair was sprayed with a fire extinguisher after trying to block protesters outside a Target store. Onlookers claimed she had a knife and the video is captioned: ‘She stabbing people’

Footage of the violent clash has been widely shared on social media, including by conservative writer Andy Ngo.

While some deplored the video as a brutal attack on a disabled woman, others saw Jennifer as the aggressor and the fire extinguisher as an act of self-defense.

One widely-circulated clip has the caption ‘she stabbing people’, showing a crowd of people filming the woman as she sat in a doorway.

One man emerged from inside the store and tried to pull the wheelchair out of the doorway, wrestling with the woman as someone shouted: ‘She got a knife’.

Out of shot, another person then took hold of a fire extinguisher and sprayed foam in her face, prompting cheers from the crowd of onlookers.

The woman was completely obscured by foam for a moment as some onlookers appeared to throw projectiles towards her and others fled the scene.

Another woman carrying a teddy bear on her back approached Jennifer’s wheelchair and made a grab for something she was carrying, possibly the alleged knife.

A third woman then appeared from behind Jennifer and beat her several times on the head, drawing a rebuke from some of the crowd. 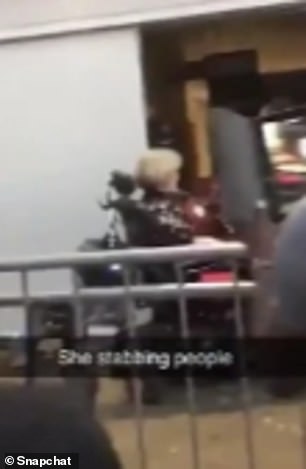 The woman claimed she was ‘peacefully protesting’ to stop people from looting a Target store, but she was quickly set upon by a crowd who said she had a knife

Speaking to a bystander afterwards, Jennifer claimed she was ‘peacefully protessting’ against the crowds.

‘I was peacefully protesting and trying to block the way so they couldn’t leave with carfuls of stuff.

‘They attacked me from front and back, they punched me in my mouth and my head. I got punched in the head several times.

‘I got grabbed from behind, people grabbed my wheelchair, they stole my keys, they stole everything they could off me.

‘I got maced in the face, I got covered in fire extinguisher stuff,’ she said, saying emergency medics had told her to go home.

Even then, Jennifer said she was ‘trying to block traffic’ so that ‘they don’t go that way’, putting a mask on as she spoke.

The Target clash came on a second night of protests after the death of George Floyd, a black man who was pinned to the ground by a white police officer’s knee despite pleading that he could not breathe.

President Donald Trump called Floyd’s death ‘sad and tragic’, and all four officers who were holding Floyd in custody have been fired.

Prosecutors said they had called in the FBI to help investigate the case, which could involve a federal felony civil rights violation. 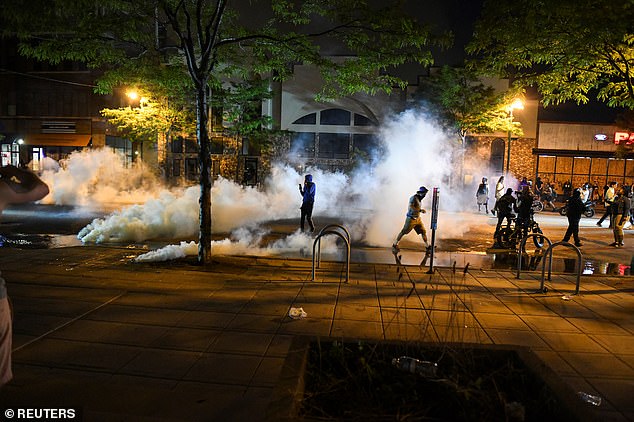 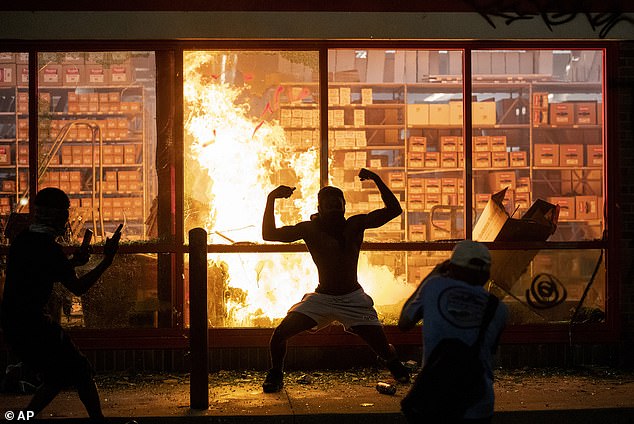 A man poses for photos in front of a fire at an AutoZone store. John Elder, Minneapolis Department Police Chief confirmed in a press conference that one person was shot and killed and that another person was being held in custody

Police continued to hold the crowds back from scaling a fence into the precinct’s parking lot, where their cruisers contain guns.

But an auto parts store from across the precinct was set alight and a nearby Target was being looted last night.

Other protests remained peaceful. At the spot where Floyd was first arrested, people carried placards and laid tributes and there was no vandalism.

‘I would like those officers to be charged with murder, because that’s exactly what they did,’ Bridgett Floyd, the victim’s sister, said on NBC television.

‘They murdered my brother…. They should be in jail for murder.’

Minneapolis mayor Jacob Frey said he could not understand why the officer who held his knee to Floyd’s neck had not been arrested.

‘Why is the man who killed George Floyd not in jail? If you had done it, or I had done it, we would be behind bars right now,’ Frey said.

‘Based on what I saw, the officer who had his knee on the neck of George Floyd should be charged,’ he said.

Floyd had been detained on a minor charge of allegedly using a counterfeit $20 bill to make a purchase at a convenience store.

‘It’s a tragic reminder that this was not an isolated incident, but part of an engrained systemic cycle of injustice that still exists in this country,’ Biden said.

‘We have to ensure that the Floyd family receive the justice they are entitled to.’

The protests evoked memories of the riots in Ferguson, Missouri in 2014 after a policeman shot dead a young African-American man suspected of robbery, as well as the case of New Yorker Eric Garner, who was detained by police for illegally selling cigarettes and filmed being held in an illegal chokehold by police that led to his death.

‘How many more of these senseless excessive-force killings from the people who are supposed to protect us can we take in America?’ said civil rights attorney Ben Crump, who was retained by Floyd’s family.