A woman in the UK has been diagnosed with Crimean-Congo haemorrhagic fever after travelling to central Asia, the UK Health Security Agency said.

The fever is a viral disease usually transmitted by ticks and livestock animals in countries where the disease is endemic.

It is only the third time since 2012 a case has been identified in the UK.

Health chiefs said the risk to public health is low, as the disease is usually spread through bites from ticks (stock image) that are not present in the UK and is not easily transmitted between people 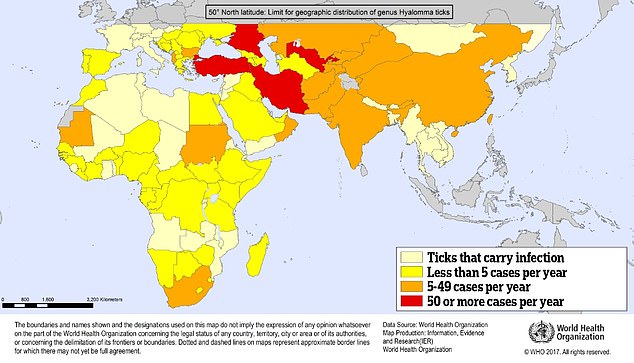 The World Health Organization map shows the distribution of CCHF cases around the globe per year. Turkey, Iran, Uzbekistan and parts of Russia record more than 50 cases per year. Meanwhile, while five to 49 are detected annually in parts of Europe (Bulgaria and Albania), Africa (South Africa, Sudan and Mauritania) and Asia (India, Pakistan, Afghanistan, Oman, China and Kazakhstan)

The woman is receiving specialist care at the Royal Free Hospital in London.

Dr Susan Hopkins, chief medical adviser at the UKHSA, said the virus ‘does not spread easily between people and the overall risk to the public is very low’.

According to the World Health Organisation, about 30 per cent of patients die, usually in the second week of infection.

Symptoms come on suddenly and include fever, muscle ache, dizziness, mood swings, confusion and bleeding in the eyes and skin among a list of others.

The hyalomma tick is the main carrier and is found in North Africa, Asia and southern and eastern Europe.