Florida woman is arrested for ‘beating her adopted son, 14, with a dog chain, chipping his teeth with pliers and forcing him to sleep on concrete’ in one of the worst cases of child abuse cop has seen in 38-year career

A Florida woman has been accused of beating her 14-year-old adopted son with a dog chain, chipping his teeth with pliers and forcing him to sleep on a concrete floor.

Santa Rosa County Sheriff Bob Johnson said the arrest of 47-year-old Patricia Hyler on Friday was after an investigation into the worst example of child abuse he had witnessed in his 38-year career.

Deputies said the mother-of-four beat the teenager, who the Florida Department of Children and Families described as a ‘target child’, with a dog lead, cracked his teeth with pliers and cut him on his head and arms.

Pictured: Patricia Hyler, 47, who was charged with aggravated child abuse in Santa Rosa, Florida on Friday

She also made the 14-year-old sleep on a filthy floor and washed him in the front yard with a hose, police said.

The three other children adopted by Hyler and her husband in Pace were also abused, police said.

Johnson said Hyler had a ‘special interest’ in the boy who the couple first took in when he was seven.

‘I’ve seen a lot of bad things,’ Johnson said. ‘But this is pretty bad.’

‘As a father it p****s me off,’ the sheriff added. ‘Somebody that can do that to another human is bad enough but you start doing that to a child? We take it personally.’

The sheriff added that Hyler removed the child from a school setting for two years to avoid being caught out. 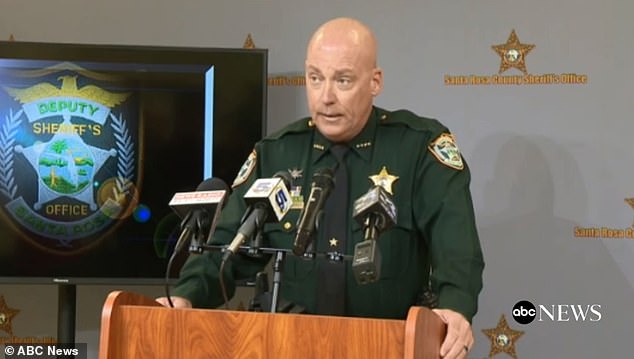 Pictured: Santa Rosa Sheriff Bob Johnson said yesterday ‘it really p*****s me off […] Somebody that can do that to another human is bad enough but you start doing that to a child? We take it personally’

Further charges will be filed later this week but it’s unknown whether these will relate to the 14-year-old or to Hyler’s other children.

The husband worked long hours and is not thought to have been involved in the abuse, police said.

One of Hyler’s children brought the case to the police’s attention. Former adopted members of the household, who had since left, described similar episodes of abuse, the Miami Herald reported.

Hyler was arrested and charged Friday with aggravated child abuse. She is being held at Santa Rosa jail without bond.