Woman is hanged after dying from a heart attack in Iran

Iranian murderess is hanged AFTER she died of a heart attack while watching 16 other prisoners killed: Execution goes ahead with corpse so victim’s mother could kick away chair from under her

A woman who died of a heart attack before she was due to be executed for murder in Iran has been hanged anyway so the victim’s mother could exercise her right to kick away the chair, her lawyer has claimed.

Zahra Ismaili was convicted of killing her husband, an Iranian intelligence official, who had allegedly been abusive to her and her daughter.

Her lawyer Omid Moradi described online how the mother-of-two was forced to wait in line at the gallows behind 16 condemned men and watch as they were hanged.

Ismaili passed out and suffered a heart attack, but they took her up the scaffold and hanged her from a noose so that the victim’s mother could kick a chair from under her lifeless legs.

Zahra Ismaili, left, was dragged to the gallows despite dying of a heart attack, her lawyer said. The mother-of-two was convicted of murdering her husband who she alleged was abusive to her and her daughter

The concession was granted under the sharia law of qisas (‘eye for an eye’), a doctrine which grants the victim or victim’s family the right to retributive justice.

Ismaili was hanged in the notoriously brutal Rajai Shahr Prison on Wednesday in the town of Karaj, around 20 miles west of Tehran.

The Islamic Republic is second only China in its use of capital punishment.

But even by Iran’s standards, a mass execution of 17 people in one day is uncommon.

The United Nations recorded 233 executions last year, up to the start of December, including three who were teenagers at the time of their alleged offences.

In 2014, Reyhaneh Jabbari was hanged in a high profile case after being convicting of murdering a former intelligence official who she claimed had tried to rape her. 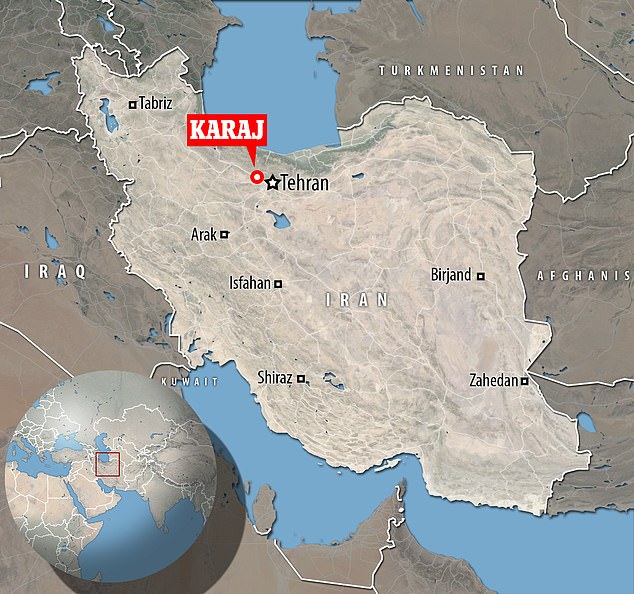 Ismaili was hanged in the notoriously brutal Rajai Shahr Prison on Wednesday in the town of Karaj, around 20 miles west of Tehran