Woman is kidnapped, drugged and gang-raped by seven men for ten days in latest sex attack to shock India

A 30-year-old woman alleges she was abducted, imprisoned and gang-raped for 10 days by seven men in India’s Rajasthan state.

The victim said another woman led her to an area in the district of Churu in Hanumangarh, Rajasthan.

She added that the woman tricked her and she was set upon by seven co-villagers who confined her, drugged her and raped her repeatedly for over a week.

Police can be seen above standing guard in India. The police in the Rajasthan case, where a 30-year-old woman was repeatedly raped by seven men, said the village was ‘notorious.’ In July, six police officers (not pictured) in the district were accused of raping a prisoner while she was in custody

The Station House Officer (SHO) from Hanumangarh district, who is responsible for the investigation, told the Times of India: ‘She has named seven men from her village. No arrests have been made.

‘We are yet to check the veracity of her allegations.’

The SHO added that the village was ‘notorious’ so they would be looking to check ‘all angles.’

Police have not ruled out personal vengeance or a blood feud as the motive. 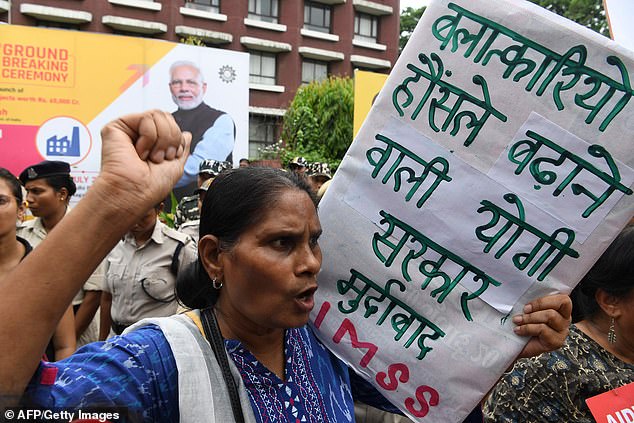 A 30-year-old woman (not pictured) has accused seven men in her village of confining her and raping her for over a week. Women above protest, calling for action in a rape case in New Delhi.  Though India has tightened punishments for sexual violence, adding the death penalty and longer prison sentences, it still ranks as the worst place for women to live, beating Saudi Arabia and Afghanistan. Rates of rape, marital rapes, sexual assault and harassment, female infanticide are still the highest in the world

India suffers from the highest prevalence of sexual violence worldwide.

A report surfaced on Monday of a nurse in a private hospital in Rajasthan who was drugged and gang-raped by four of her colleagues, including a doctor.

The men recorded the rape and blackmailed the nurse for over two years, according to Indiatoday. 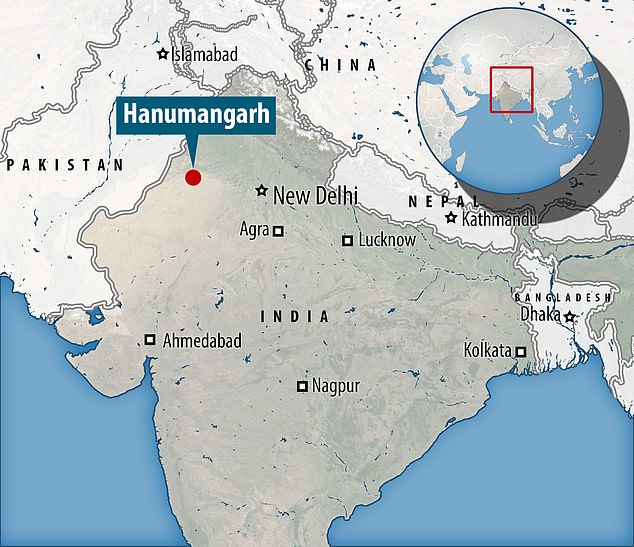 The gang-rape allegedly took place in Hanumangarh, a city in Northwest India’s Rajasthan State. A woman led the victim to a corner of Churu district where she was set upon by seven of her co-villagers. According to the country’s National Crime Record’s Bureau, around 100 sexual assaults are reported to police officers every single day in India

In July a 35-year-old woman accused six policemen in Churu of persistent custodial beatings, followed by gang-rape by the cops.

She said the police had also tortured her brother-in-law to death when they were both arrested for theft.

According to the country’s National Crime Record’s Bureau, around 100 sexual assaults are reported to police every day despite attempts from government and local law enforcement to curtail the epidemic.