Tom Hiddleston’s ‘orgasmic’ show: Woman is moved to ‘spasms of ecstasy’ and heard moaning during actor’s Broadway performance of ‘Betrayal’

A female Broadway audience member was moved to ‘spasms of ecstasy’ and heard making ‘low moans and giggles’ during a performance by Tom Hiddleston.

Posting on message board All That Chat, another theater-goer revealed that the well-dressed woman in her 30s’ behavior left them ‘speechless’.

They said that while sitting in Row B at the Bernard B. Jacobs Theatre the woman, who was sat next to their friend, started moving around and making noises.

‘I could hear and my companion could feel a rhythmic banging against his armrest, punctuated by occasional low moans and giggles,’ the person said.

A woman in her 30s was moved to ‘spasms of ecstasy’ during a Broadway performance by Tom Hiddleston. Pictured is Tom, right, with co-stars Charlie Cox, left, and Zawe Ashton, middle

They continued: ‘The banging got faster and faster, until finally there was one slightly louder “Ha” and she resumed normal seat position, put her head back and closed her eyes.’

They explained that the noises were not too loud, but some people sat in front did turn around to see what was happening.

Later on in the play, the woman drew the attention of those around her once more.

The audience member said: ‘We thought this bizarre incident was over, but lo and behold, as Tom Hiddleston got closer to downstage right and was kissing the female character, our row mate assumed the position again and once more started the process up, with another final ‘Ha’ and nap. 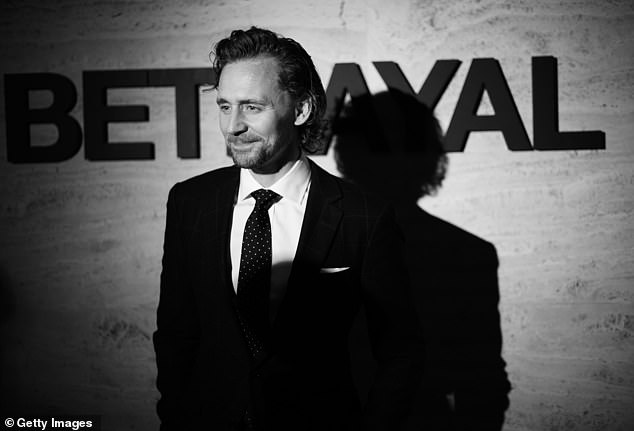 Betrayal opened in New York at the start of September after a run in London’s West End. Tom Hiddleston is pictured on opening night 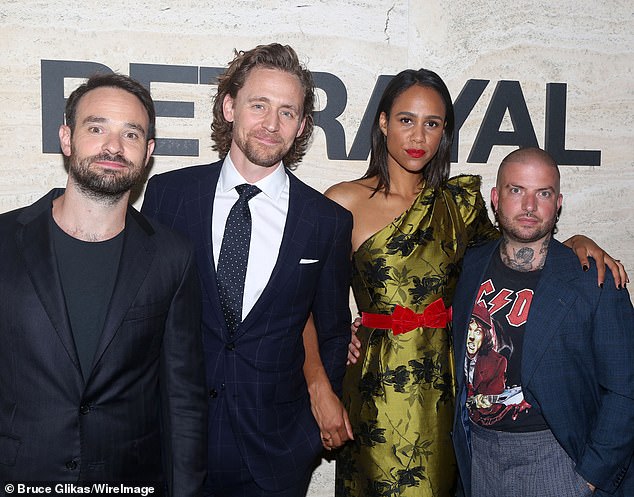 The audience member said the show was ‘wonderful’ and the woman in her 30s left quickly at the end. Pictured left to right are cast members Charlie Cox, Tom Hiddleston, Zawe Ashton and director Jamie Lloyd

‘She woke up for the bows, stood and clapped enthusiastically and then exited quickly. There really is no question in our minds or the mind of the woman sitting in front of us what had happened.’

They finished the post by saying: ‘By the way, the show really was wonderful and the cast first rate. But you might want to avoid seat B-3.’

Betrayal was inspired by Pinter’s secret relationship with Joan Bakewell during the 1960s.

Tom plays Robert in the play with Zawe Ashton starring as his on-stage wife Emma and Charlie Cox playing Jerry.

The actor and Zawe have reportedly been dating since as early as last February but he has kept their romance out of the spotlight.